Police from Arizona armed with the Russian "Wasp"

December 19 2016
24
The Russian “Osa” tubeless pistol, with which various non-lethal ammunition can be used, is now used in law enforcement agencies of almost 10 countries. Created by NIIPH specialists exactly 20 years ago, a barrelless pistol is in demand by the market. In 2016, this is Russian weapon American police from Arizona also received self-defense. 1 December 2016, representatives of the Tekhmash concern, which includes the Institute of Applied Chemistry, told reporters about it.


Arizona, which is located on the border of the United States and Mexico, has the reputation of not the most prosperous of the US states in terms of the number of crimes committed. There is a large number of smugglers, drug dealers, as well as illegal migrants, who are a constant headache of local authorities. At the same time, most of the offenders who penetrate into the United States from Mexico are not armed, therefore, police officers are not entitled to use firearms to detain them. At the same time, the accumulated experience shows that the state means available to the state police, which include stun guns, are not sufficiently effective and can be used only with fairly close contact.

At the same time, criminals often resist law enforcement officers, using a variety of improvised means - sticks, stones, which prompted the American police to use non-lethal weapons, for example, the Russian “Osa” pistol. This is a fairly compact weapon that can be loaded immediately with 4 18,5 caliber cartridges. At the same time, the tubeless pistol is equipped with a laser target designator, making it easy to hit targets at a distance of up to 15 feet (5 meters). One of the main advantages of the Russian development is the possibility of using a wide range of ammunition, among which are not only traumatic cartridges with a rubber bullet, but also sound and sound, signal and lighting ammunition, as well as pepper cartridge (irritant). 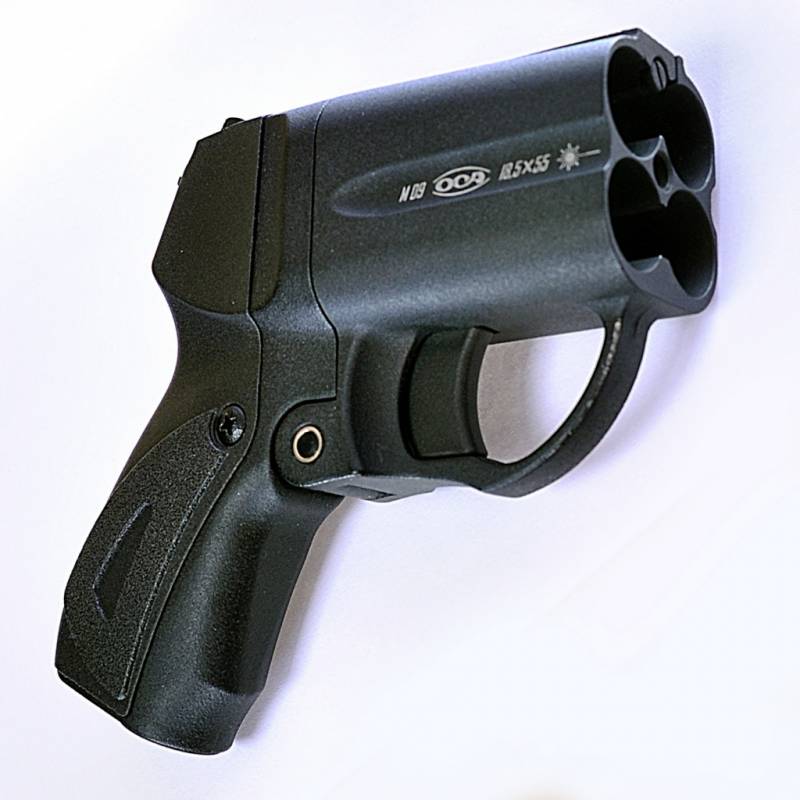 In November 2015 of the year, the Pinal County Police Department reported that it was the first US police unit to use the Russian Osa pistol. For several years, the administration tried to find the most appropriate sample of non-lethal weapons, but it turned out to be very problematic on the American arms market. That is why the police turned their attention to Russian products. Indeed, Russia has gained enough experience in creating and producing non-lethal weapons: traumatic, gas and signaling, which is directly related to the current legislation.

The Osa complex, created by experts from the Scientific and Research Institute of Applied Chemistry (NIIPH), was first presented at 1996 at the International Weapons Exhibition in Moscow. This complex consists of a tubeless four-shot pistol PB-4-1ML, as well as a rather wide range of cartridges with an electric initiation method. Ammunition to this gun is designed to solve problems of self-defense and special tasks. A unique feature of this development is the presence of the so-called "smart" electronic trigger, according to the manufacturer's website. When you press the start key, a special chip is automatically activated, located in the body of a barrelless pistol. The energy source is a compact pulsed electromagnetic generator. Being activated, this chip conducts testing of ammunition loaded into a pistol. The test is conducted in the "request-response" mode and takes no more than a few microseconds in time.

During the execution of each such test, the chip receives information on the status of each chamberless chamber, whether the cartridge is currently loaded into the chamber, and whether it is ready for firing. After the chip finds a working cartridge, it sends an impulse to it, which ignites the cartridge's electrical cap. This system allows you to simplify the process of shooting: each press on the trigger leads to a shot, as long as there are still working cartridges in the pistol. In order to increase the safety of the shooter and surrounding people, the descent force on pistolless Osa pistols is 40H. 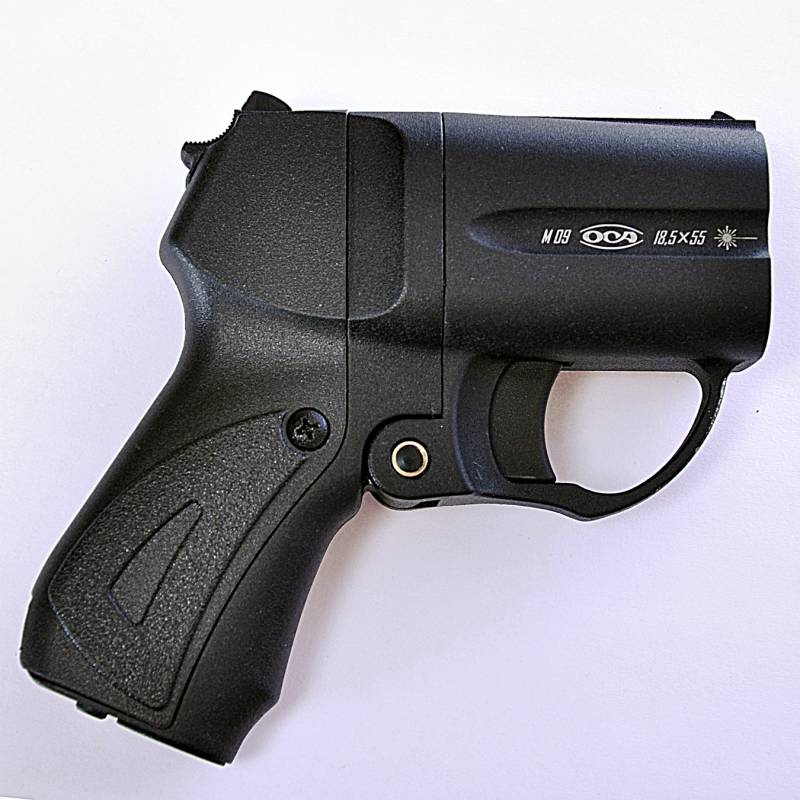 The electronic trigger used by the developers of the weapon helps to increase the reliability of the tubeless pistol: there are simply no reciprocating moving parts that could jam due to faulty cartridges, contamination of the weapon, etc. In the event of a misfire, the tubeless pistol will automatically select and fire the next working cartridge: there is no need to correct the delay and reload the weapon, as is the case with ordinary systems. The electronic trigger used in the Osa also contributes to increasing the safety of non-lethal weapons: as long as the trigger is not pressed, the cap cannot work, which means that any physical impact on the weapon and (or) on the cartridge cannot lead to a pistol shot.

The body of the barrelless pistol "Wasp" is made of high-strength plastic. The weight of the unloaded “Wasp” model M-09 is only 0,365 kg, and the dimensions are 136x125x39 mm. Due to their small size and low weight, the non-lethal Osa non-stemless pistols are great for concealed carry throughout the day. Sights of the pistol consist of mechanical sights of the “Express” type and laser designator integrated into its design (red or green).

The official distributor of the Russian “Wasps” in the countries of North, Central and South America is Defenzia, which has its own representative offices in the USA and Brazil, and its activities have been licensed by BATF (Bureau of Alcohol, Tobacco, Firearms and Explosives). 1 December 2016, the press service of the Tekhmash concern, reported that the state of Arizona bought Russian non-lethal blunt-pistol Osa for the local police sheriffs. The first batch included 60 pistols for the price of 1100 dollars apiece, as well as more than 10 thousands of cartridges to them. This is the first in the newest stories a case where domestic non-lethal weapons were acquired for the needs of American law enforcement.

Currently, the weapon is undergoing pilot operation in the United States. “According to the results of the preliminary tests, the Russian“ Osa ”received a rather high assessment from the American police, currently negotiations are underway to acquire data from gunless pistols by sheriffs from other US states,” noted the general director of the Tekhmash concern Sergey Rusakov. 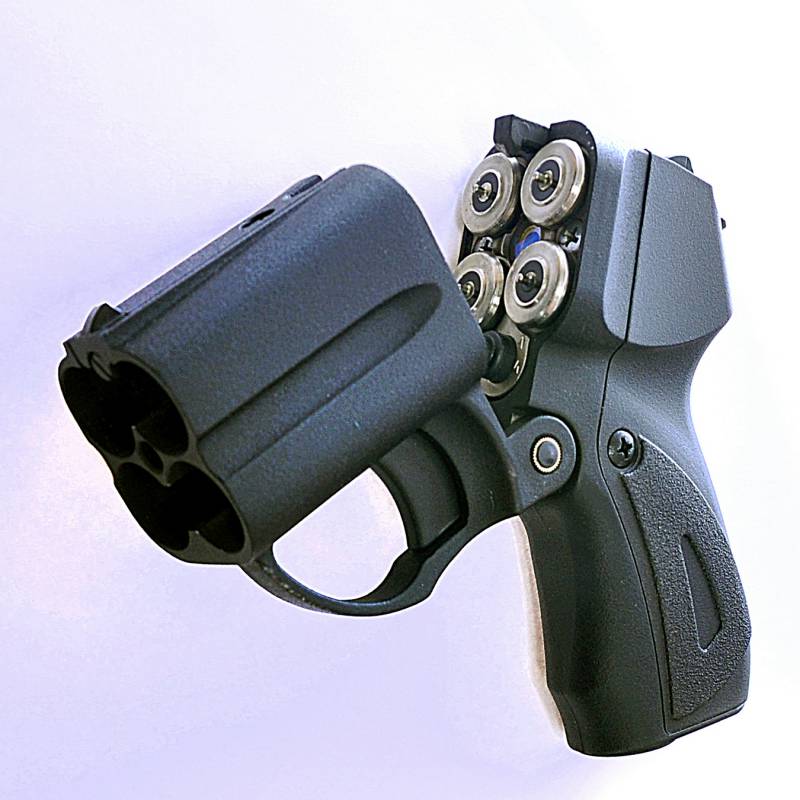 In the future, each police patrol can receive this weapon. The initiator of such an unusual contract for the United States was the sheriff of the District, Paul Bebe, who is a fairly well-known and popular person outside of Arizona. 47-year-old Bebyu served for over 10 years in the US National Guard, took part in the war in Iraq, and in 20 was awarded the honorary title “Sheriff of the Year” for achieving significant successes in the fight against corruption, Mexican mafia cartels and illegal migration. Residents of Arizona love their sheriff so much that they even nominated Paul Bebyu to the US Republican Party twice.

Baby is convinced that adopting the non-lethal Wasp pistol will help to avoid fatalities when detaining law enforcement officers. This is especially true in today's realities, when many of these cases receive wide political and social resonance throughout the country. The sheriff believes that non-lethal weapons are certainly not a panacea, but such weapons help expand the arsenal of special tools available to the law enforcement forces. Non-flying weapons can be useful in various situations that police officers encounter in their work. “For example, it can be a person with mental problems, for example, a soldier who returned from Afghanistan with post-traumatic stress disorder,” said Paul Baby. Among other things, the Russian "Wasp" is much more compact than the Taser X26P stun gun, which today is the standard weapon of the American police and allows you to hit the target only at a very short distance.

The Russian non-barrel, four-shot Osa pistol M-09 (in the USA it is distributed under the brand name Defenzia M-09) is already the fourth generation of Osa tubeless pistols developed by NIIPH specialists as early as the 1990s. This weapon is mass-produced in Russia, starting from 1999, today it is produced by the company New Weapons Technologies LLC. One of the most popular ammunition to it is the cartridge of high efficiency caliber 18,5x55TD, equipped with a traumatic rubber bullet. Its stopping effect is comparable to that of the cartridge 9x18 PM pistol. The stopping effect is provided due to painful shock when a rubber bullet hits a person.