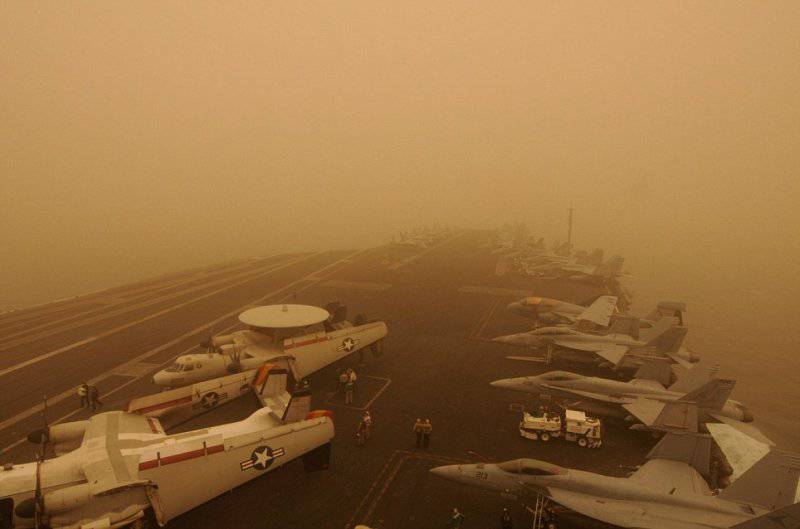 Sleepy Arab afternoon was disturbed by the bell.

- How are you, O Sheikh Jaber?

- Glory to Allah, I feel good, I have already had dinner.

- By Allah, - said Saddam, - you will no longer have breakfast in Kuwait.

The same night Tanks "Tavalkans", throwing up clubs of sand, rushed across the border. Emir Jaber al-Salam fled to Arabia, where the remains of his battered army took refuge. Kuwait became the 19th province of Iraq.

At this time in the Middle East were on alert two carrier strike groups of the US Navy. Which did nothing to prevent the occupation of the strategically important for the West, oil Kuwait. Stood and watched. The AUGGs who arrived to the rescue (there were six of them in total by the winter) were also doing idleness, waiting for the Air Force to come into play.

According to the laws of military science, the obvious solution was to launch a series of preemptive strikes against Iraqi troops, if only to slow down the deployment of the group and prevent the Iraqis from quietly digging in Kuwait (by winter they dragged a bunch of air defense missile systems there and built three defensive lines).

But the aircraft carriers were inactive. Admirals understood that an attempt to intervene on their own would result in heavy casualties among decked wings without noticeable harm to the enemy. Now you can continue your conversation about "efficiency", "tactical flexibility" and "projection of force" with the help of aircraft carriers and deck aviation.

This material is the answer to the article. "And a little more about aircraft carriers", published a day ago on the "BO". In this article, my opponent Andrei Kolobov diligently argued the importance of the participation of AUG in Operation Storm in the Desert.

According to Andrew, the insignificant number of combat missions against the general background was bathed by the method of using carrier-based aircraft. As a result, aircraft carrier pilots made a significant contribution to the victory, which, in certain disciplines, reached 23 and even more than 40% !!!

1. There is no need to look for hidden meaning there, it is not.

Approximately in the same way as at school “losers” losers, so that they do not spoil the list. Trying to find any formal reason to put that “ud.”, Even if the reason is absurd and contrary to common sense.

The only reasonable explanation: Americans drove aircraft carriers to Iraq because they had to use them somewhere. Admirals also want orders.

Neither the tactical nor the strategic plan had any need for the participation of the AUG in that war. The Yankees and their allies had five times as many combat aircraft ashore.

“When the Americans lacked countless bases, aircraft were deployed without a word at international airports: Al Ain (UAE), King Fahd (Saudi Arabia), Muscat (Oman), at Sharjah International Airport and Cairo - wherever the place and necessary infrastructure ".

In other words, even the existing forces had to be based at international airports, and if you still had to deploy deck aircraft there too?

Andrew, do not be afraid and scare others. If desired, they would place a grouping equivalent to the wings of six AB. For example, removing part of the useless aircraft of their allies from the air bases of the region. What did the obsolete Saudi F-87, British “Jaguars” or surviving “Skyhawks” of the Kuwaiti Air Force mean in that war 5?

And replacing all of this aviahlam multipurpose fighter 4-th generation. 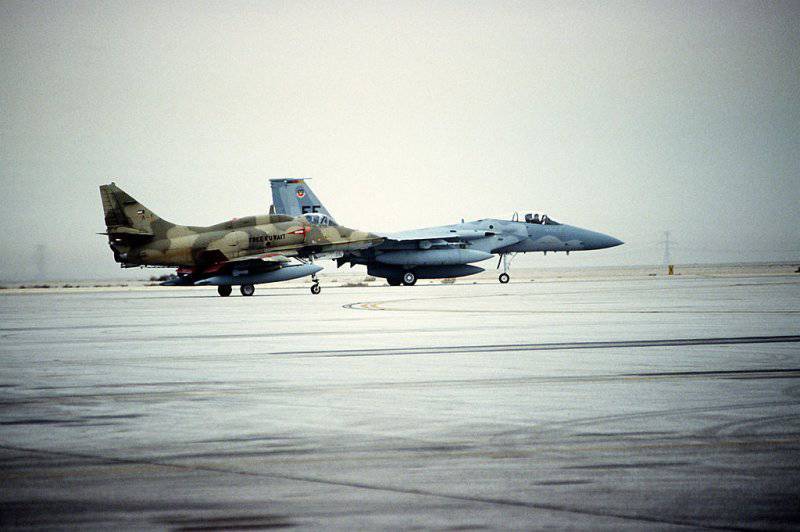 "Accidental meeting". The US Air Force F-15C and A-4KU look at each other in surprise. There is a temporary gap between them in 20 years.

Also, do not forget about the higher performance of ground-based aircraft (one F-111 for combat load and sighting systems cost as much as two or three deck bomber). Andrei will surely say: "How is that, I proved last time that there are only a couple of percent differences." But he took for comparison the best (and in fact the only) type of carrier-based aircraft with the most primitive of land multipurpose fighters (F-16). Only it is necessary to take into account that the light and massive "Falken" is used to minimize costs, if necessary, F-15E and the company will go into battle.

As a result, we are talking not about three hundred, but about a much smaller number of units. aircraft technicians. As for fuel supplies and 2, thousands of tons of ammunition aboard aircraft carriers ... The Capella would bring bombs, spare parts and consumables for the year of war ahead, good, she has a deadweight of 40 thousand tons and a transition speed higher than that of aircraft carrier. 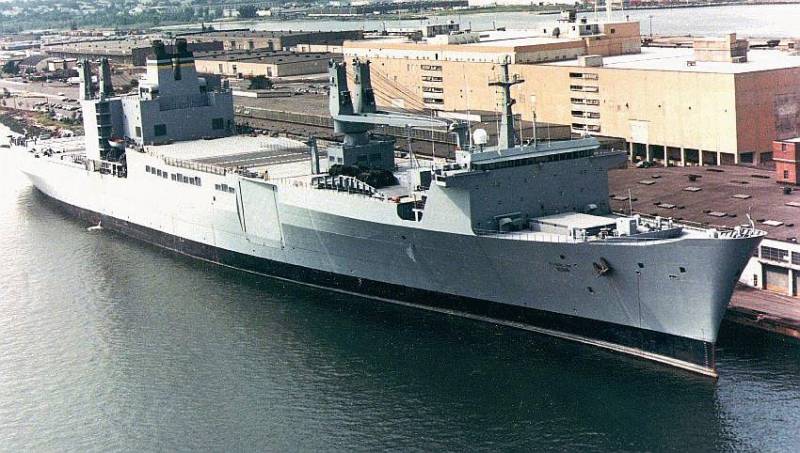 Gas turbine military transport "Capella", one of the best in the Maritime Transportation Command. Speed ​​- 33 node

In the absence of aircraft carriers, the war would continue in its current form, in which we know it. Nothing would have changed, except for the lower operating costs of the Coalition.

If Iraq would have modern operational tactical missiles (OTR)? In this case, the Americans with their allies would be able to provide air cover for all airfields ... At the same time, aircraft carriers cannot be hit by OTP, since they represent a moving target.

And what is the use of this if they cannot fight on their own?

No matter how cool, without ground air bases anywhere. If the insidious enemy has time to bomb all the airfields, the war is automatically lost. The presence of AB will not help anything. Or are you going to completely eliminate the base and place the aircraft on ships? Not? Then why for the hundredth time the argument about the lesser vulnerability of "floating airfields"?

3. "We are surprised to find that the US carrier-based aviation, which had only about a quarter of the total number of American tactical aircraft, turned out to provide 41,3% of all heavy fighter jets."

The surprise could be if these deck fighters would be the last hope. However, the Yankees have always had the opportunity to transfer a couple of additional F-15 squadrons to the theater. And nothing would have changed.

All the same, deck "Tomkaty", despite the thousands of sorties, could not intercept anyone, all the 34 aerial victories went to F-15C.

By the way, despite his reverent attitude to numbers (up to tenths of a percent), dear Andrei forgot to take into account 50 heavy fighters of the Saudi Arabian Air Force (the Saudis also flew F-15). However, on the general background, their value was small: only two declared victories. 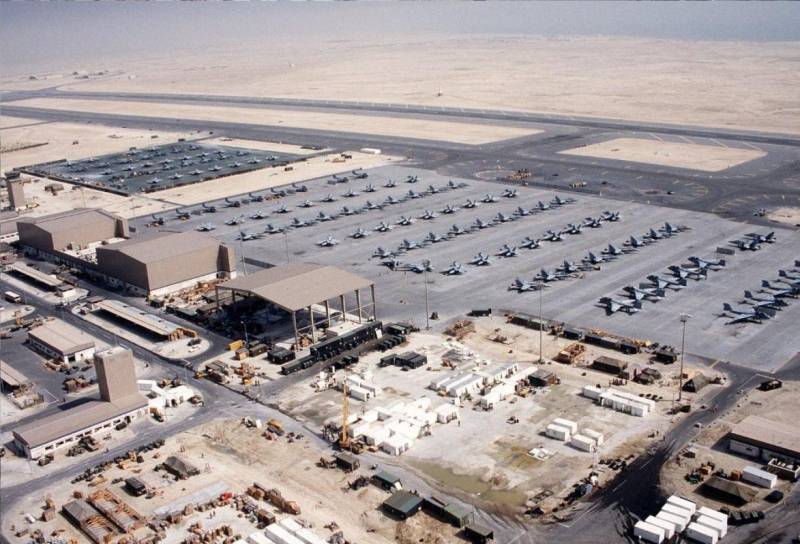 Hundreds of marines at Sheikh Isa airbase in Bahrain, 1991

4. "It remains only to repeat that the mass of bombs can not serve as a measure of the effectiveness of aircraft."

Andrew is absolutely right. For example, about 40% of the highest-priority targets in Iraq were recorded as “stealth” (the group included NXHX 42, which made less than 2% of total departures). In fact - the most effective of the strike aircraft of the war. 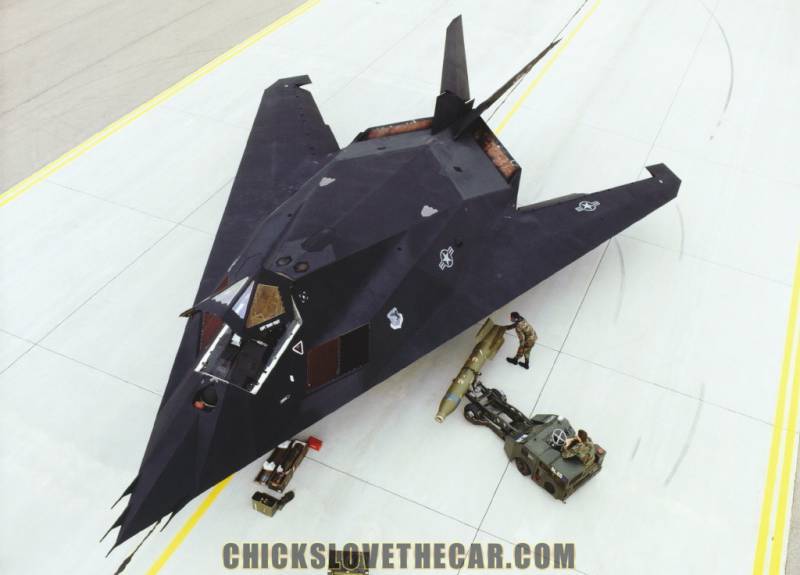 In the first raid on a nuclear facility at Al-Tuva participated 32 aircraft F-16C, armed unguided bombs, accompanied 16 fighter F-15C, four directors the EF-111 interference protivoradarnyh eight F-4G and 15-135 tankers COP. This large group failed to complete the task. The second raid was accomplished at night with just eight F-117A with guided bombs. This time we destroyed three of the four Iraqi nuclear reactors.
(From the speech of the commander of the Air Force of multinational forces, General Horner.)

1. As Andrew correctly noted, “the number of bombs dropped” is not the only measure of success. The only problem is that, as a result of the Gulf war, deck aircraft "blew" all points at once. The scanty number of sorties and dropped bombs, lower combat load, worst aircraft performance characteristics, no air victories ... Finally, naval aviation pilots were just afraid to entrust important tasks. These are the unfortunate facts that no longer correct columns of numbers.

2. Always, as the need arises, the command of the air force will "get out of its sleeve" a trump card. Ultimate heavy interceptors (F-15C or “Raptor”), invisible airplanes, tactical bombers (F-111 and F-15E), specialized anti-tank attack aircraft, etc. etc.

3. Unlike them, carrier-based aircraft in any situation will be limited to a set of multi-purpose light class fighters. During the events in question (1991), sea pilots had to fly generally on primitive aircraft. You can argue, citing the example of the Su-33, but physics is impossible to deceive. When taking off from the deck, his fuel level and combat load are sharply reduced.

Taking this opportunity, I would like to draw your attention to an interesting approach to the analysis of the actions of the MNF air group. Many authors, including And Andrey, obviously, has a home supercomputer capable of taking into account the many variables on which the outcome of the war depends. Daily ammunition consumption, selection and distribution of targets, bomb suspension schemes for each type of aircraft, analysis of the actions of airfield services, distribution of departures in the first days of the operation ...

If all the data is still there, what are you trying to prove by the tenth of a percent? What is this ostentatious accuracy for, if we do not have full access to the source data?

Did you give these numbers to give a scientific look to the discussion? So draw in the middle of the text the integral sign, it will turn out even "more scientific".

The format of a small introductory article for a wide range of readers is not suitable for serious calculations.

How to distinguish white from black? Through the eyes! Simple words about simple things. The most understandable and obvious examples - and everything immediately falls into place.

I can bet on the effectiveness of AB in the open ocean. But to prove their importance on the example of the operation “Desert Storm” - only the opposite effect can be achieved this way.

All the facts about the participation of AUG in a purely land war testify against.

This is evidenced by the number of aircraft located on the coast - 5 times more than at the "floating airfields".

And the ridiculous disposition of placing half of the aircraft carriers in the Red Sea, so that sea pilots had to fly the longest, across the Arabian Peninsula.

And other shameful facts: the wing of the largest and most modern aircraft carrier (nuclear "T. Roosevelt") made its first combat departure only on the third day of the war. 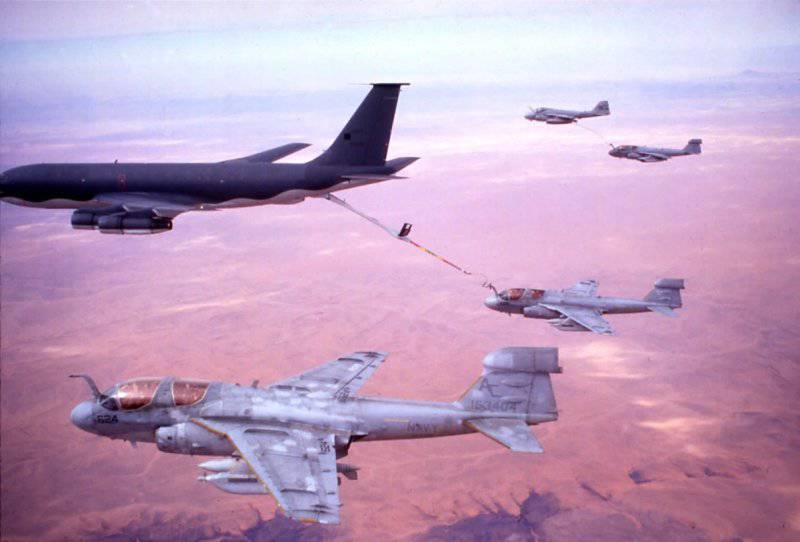 Unlike the Air Force aircraft, which could still fly to the target on their own, the deck aircraft were required to refuel. In the photo - deck EA-6B refueling from KC-135 over the Arabian desert