December 15 2016
64
Yak-152 is a piston trainer aircraft for initial training and professional selection of pilots at an early stage of training. The aircraft is part of the Yak-130 combat training complex and also includes a procedural simulator, a training computer class, and means of objective control. The Yak-152 aircraft was developed by specialists of OKB im. A.S. Yakovleva ”, which today is part of PJSC“ Irkut Corporation ”.


The first Yak-152 training aircraft was built at the Irkutsk Aviation Plant, a branch of Irkut Corporation PJSC. The developers of this model relied on the rich experience of OKB im. A. S. Yakovleva in design aviation training techniques. Since 1935, more than 22 thousand training piston aircraft of this design bureau have been produced in our country and abroad: UT-2, Yak-11, Yak-18, Yak-52. The development and preparation of the production of the Yak-152 training aircraft are based on the use of the latest Russian design solutions and developments in the field of small aviation.

September 29 The 2016 of the year at the aerodrome of the Irkutsk Aviation Plant took place the first flight of the Yak-152 training aircraft for the initial flight training. The plane lifted into the sky a test pilot of the 1 class, OAO OKB im. A. S. Yakovleva »Vasily Sevastyanov. According to him, the flight mission was performed in full, the plane behaved normally. According to Viktor Bondarev, Commander-in-Chief of the All-Union Military Space Council of Russia, the tests of the aircraft should be completed by March of 2017, after which the Yak-152 is scheduled for mass production. 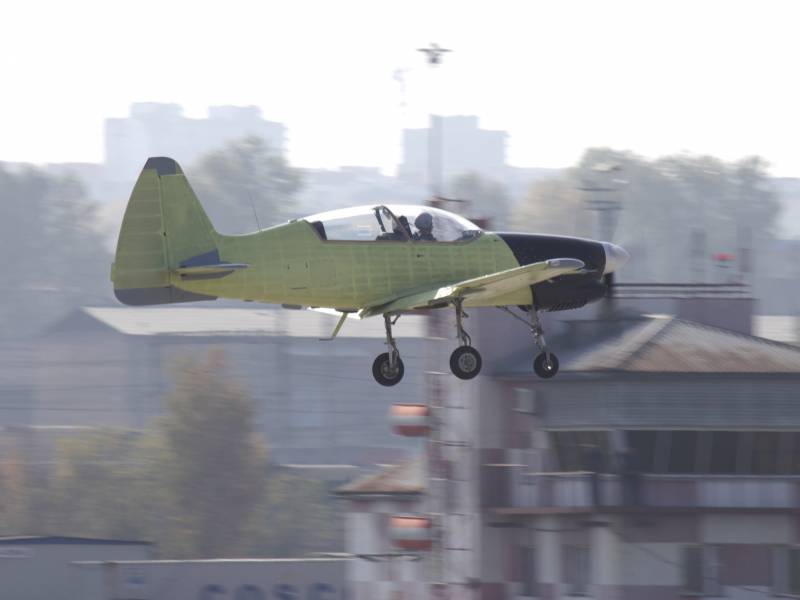 In June 2016, the Ministry of Defense of the Russian Federation ordered 150 Yak-152 aircraft, which are intended for the initial training of future military pilots. Mass production of this model takes place at the facilities of the Irkutsk Aviation Plant. The total demand of the Russian Ministry of Defense for Yak-152 aircraft is estimated by experts in 250-300 units. DOSAAF Russia can purchase even more 100 of such aircraft for its training centers. 16 March 2016 of the year DOSAAF of the Republic of Belarus concluded a framework agreement for the supply of training aircraft Yak-152 for its structures, the number of aircraft purchased under this agreement is not specified.

History Yak-152 training aircraft developed by the Yakovlev Design Bureau, designed for the initial flight training of cadets of the air force, began in the 1990-e years. Then the plane was offered in conjunction with the advanced training aircraft designed at that time — a promising training complex UTK-Yak, which later received the designation Yak-130. The new aircraft was supposed to be created on the basis of the Yak-54 double sport aerobatic training and training, which was built in the 1994-2002 years at the Saratov Aviation Plant, where 14 copies of this vehicle were made. Later, from 2008, at least another 5 of Yak-54 aircraft was produced by Arsenyev Aviation Company named after NI Sazykin. Originally, the projected aircraft was designated as Yak-54М, but in 2000 it was decided to rename it Yak-152. Thus it was emphasized that the machine should be the successor to the popular and very famous "flying party" Yak-52.

In 2001, the design of the Yak-152 aircraft took part in a competition held by the Russian Defense Ministry for a new aircraft of the initial flight training. The main rival was the Su-49, designed by Sukhoi design bureau specialists. Despite the fact that the competition was held, funding for the further development and construction of aircraft by the customer was not allocated. As a temporary measure, Yakovlev proposed to modernize previously produced Yak-52 aircraft to the Yak-52 version. The upgraded training aircraft with updated instrumentation, a new cockpit lantern with improved visibility and an M-14X engine with an MTV-8 propeller first rose to the 16 sky on April 2004, and was tested by state tests in the spring of next year. The aircraft also differed with an increased fuel reserve and the installed SKS-94М crew rescue system. Serial upgrading of already produced Yak-52 to version Yak-52М was planned to be carried out at 308-m aircraft repair plant in Ivanovo, but these plans could not be implemented under those conditions. 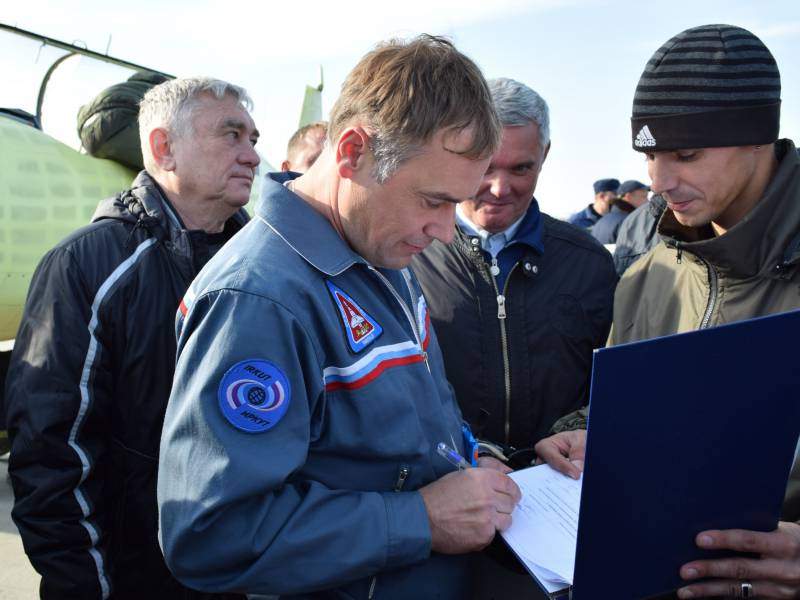 At about the same time, genuine interest in the Russian project was shown in the PRC, where the question of developing a new aircraft for the initial training of pilots was no less acute than in the Russian Federation. Already in 2006, Beijing signed a contract with the OKB. A. S. Yakovlev, whose specialists acted as consultants to their colleagues from Hongdu. They helped them develop a new TCB, which received the designation L-7 (the Russian prototype of the Chinese aircraft wore the designation Yak-152K). The first Chinese prototype L-7 was assembled by Hongdu in the autumn of 2010, and in November of the same year, the training aircraft debuted at an air show in Zhuhai.

The case with the Russian version of the aircraft moved off dead center only in the 2013 year, when the first information appeared that the pilots were ready to return to the Russian Defense Ministry about the subject of the new aircraft. 17 March 2014 of the year on the official government procurement portal appeared a notice of the competition for the implementation of the ROC "Development of the training complex of the initial flight training of pilots on the basis of the Yak-152 training aircraft for the needs of the Ministry of Defense of the Russian Federation." According to the results of the competition held by 30 in May of the same year, the Ministry of Defense of the Russian Federation concluded a state contract with OAO OKB im. A.S. Yakovlev. The cost of the contract was 300 million rubles, the deadline is the end of 2016 of the year.

The Yak-152 training aircraft is a two-seater single-engine monoplane, made according to the classic aerodynamic configuration with a low-lying wing, retractable in flight, a three-bearing chassis with a nose wheel and a modern XEDUM-diesel engine RED A12T operating on aviation kerosene. The damping qualities of the aircraft landing gear supports with low-pressure tires, as well as short takeoff lengths during takeoff and landing run, allow the Yak-03 to operate even from small ground airfields.
The glider of the Yak-152 is all-metal except for the trim of the rudders and ailerons that are made of carbon fiber reinforced plastics. 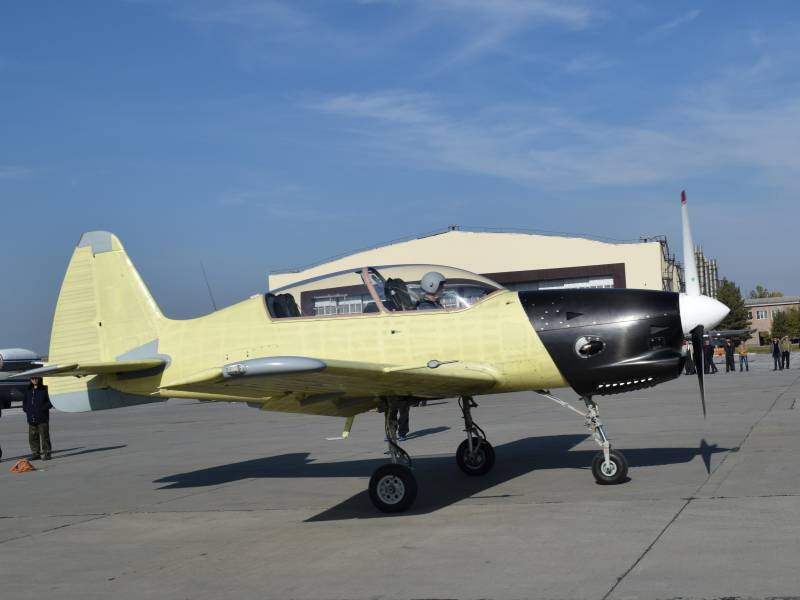 The all-metal fuselage of the semi-monocoque was reinforced by four spars. The one-piece single-wing aircraft wing is made up of biconvex asymmetrical profiles and is equipped with retractable flaps and ailerons, which improve the take-off and landing characteristics of the aircraft. The bearing surface is attached to the fuselage at 4's points, which are located on the side member and rear wall.

The equipment installed on board the aircraft allows novice pilots to acquire the necessary skills for handling modern flight-navigation and sighting equipment, as well as radio communications equipment. For the Yak-152 training aircraft, a tandem layout of the crew members in a double cabin was chosen: the front seat is intended for the student pilot, the back seat is for the instructor. Yak-152 can fly and one crew member from both the front and rear seats. A special feature of the machine is the unique SKS-94М ejection system, which allows for the safe emergency escape of an aircraft by crew members.

The simplicity of the aircraft design, high reliability, approaches to the aggregates and communications of the installed systems provide a high level of ease of maintenance for the Yak-152 with minimal cost to prepare for flights using the minimum amount of public aerodrome facilities. The aerodynamic layout of the wing, the form in the plan and the profiling of the Yak-152 training aircraft were chosen by the designers from the condition of providing the functions of the initial training and training of pilots. 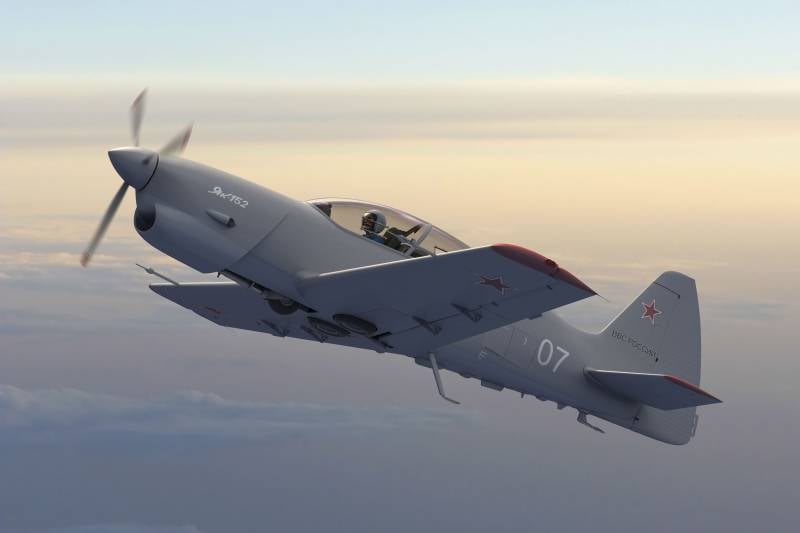 Yak-152, render: www.irkut.com
The Yak-152 is designed to train students in piloting techniques and the basics of navigation, mastering the skills of simple, complex and aerobatic flying, as well as piloting the aircraft as part of a group. The aircraft provides a successful solution to the key tasks of the initial flight training in day and night conditions. This machine allows you to provide professional selection, further education and training of novice pilots in both military and civilian aerobatic training centers, pilots-athletes in DOSAAF. The aircraft will be operated in flight schools and in flying clubs throughout the country.

The main directions of training on the plane Yak-152:

• piloting technique, which includes simple, complex and aerobatics;
• basics of navigation;
• implementation of the corkscrew and the withdrawal of the machine from it;
• instrument piloting technique during the flight en route and approach with the use of airfield radio engineering landing systems;
• aircraft piloting technique as part of a group during the day in simple weather conditions, as well as behind the clouds;
• actions of the pilot in special cases.

• display of important information on modern color multifunctional indicators;
• triple reservation of flight-navigation equipment;
• registration of all information on the flight parameters and operation of the aircraft’s systems, as well as the recording of crew members' talks on a secured onboard storage device;
• automatic response to a request from the radar system of state identification and secondary radars of the ATC system (air traffic control). 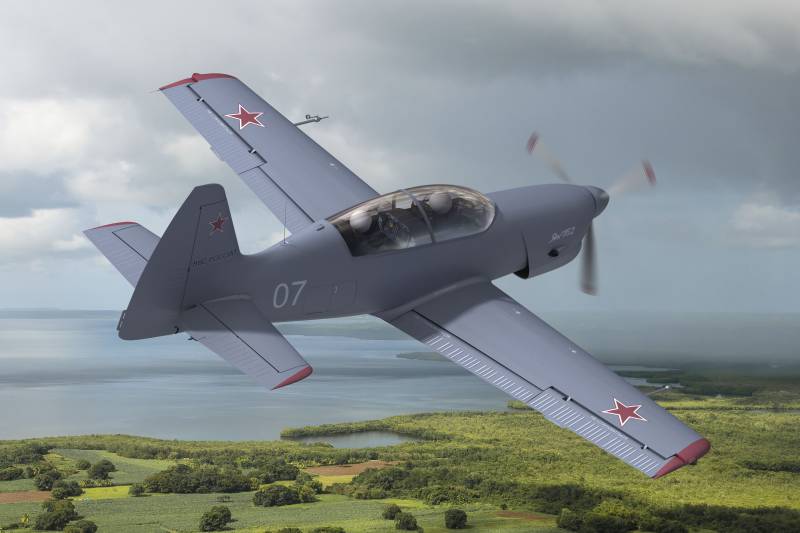 The Yak-152 training aircraft of the initial flight training is a new direction in the development of training aviation of the Irkut Corporation. The advantages of this machine, of course, include the fact that the aircraft can be operated even from small unpaved airfields, the strength of the soil on which is not lower than 5 kg / cm2. Also advantage is the ability to store training aircraft outside the hangar. The estimated resource of the Yak-152 is at least 10 thousands of flight hours or 30 years of operation and 30 thousands of landings. Units, systems and equipment of the Yak-152 can be operated "by state". 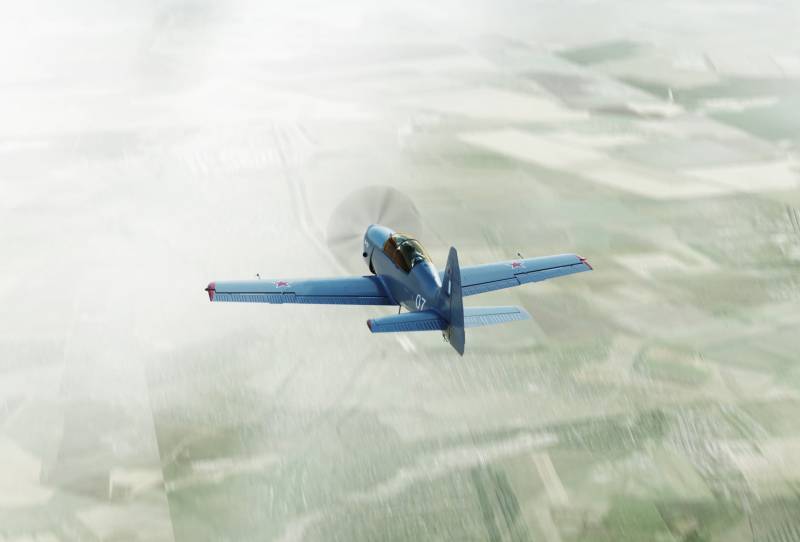 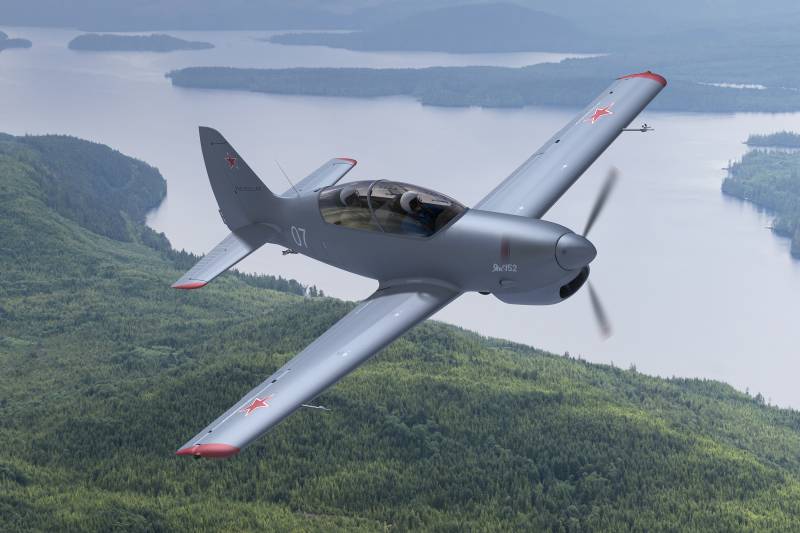 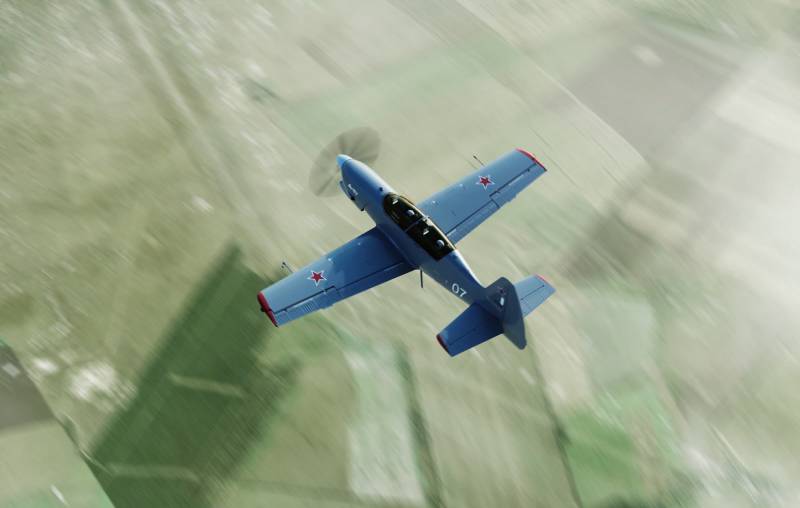 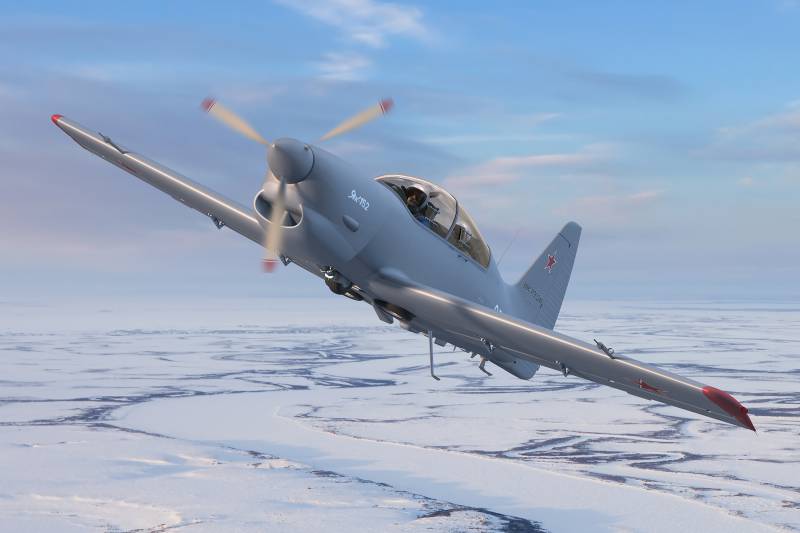