Sling under the dome

November 26, 2016
192
Since 14, May 1948, which was proclaimed on this day, Israel constantly wages wars with its surrounding states: Egypt, Syria, Jordan, South Lebanon, as well as Hezbollah and Hamas groups. The use of missiles by militants causes the greatest damage, so the fight against them is one of the most important tasks.


According to Defense Minister Ehud Barak, said in June 2009 of the year, multi-level protection against any rocket attacks on Israeli territory is a strategic goal. An integrated missile defense system should initially include four lines for intercepting ballistic objects.

The basis of the Hets anti-missile complex of the first missile defense intercept line will be the PR Arrow-3 (Strela-3), created using the American hit-to-kill technology (direct hit destruction).

Israel Aerospace Industries (IAI) and Boeing since 2009 have been developing the Hetz-3 complex with Arrow-3, which will provide a solution to the problem at high altitudes and distances. The Arrow-3 PR, whose core is the Arrow-2, will be capable of intercepting ICBMs at altitudes up to 100 kilometers and distances up to 1250 kilometers.

Hetz-3 batteries with EL / M-2080 Block B Super Green Pine (or Great Pine) radar will be able to destroy BRs released in the protected area of ​​Israel outside the atmosphere at an earlier stage than Hetz-2, which will allow increase the range of the missile defense by four times. In November 2015, representatives of the Israeli company IAI - Elta announced the creation of a new strategic radar complex TERRA, intended for the early detection of ballistic and aerodynamic targets, their tracking, and also for viewing space. In the future, these radar stations can enter the missile defense system.

It is expected that the first Arrow-3 PRO battery will be manufactured and brought to operational readiness for the 2017 year. According to expert estimates, Strela-3 will be able to hit BRs like the Iranian Shahab or Fatah-110 (Fateh-110), the Syrian Scud, having a range from 400 to 2000 kilometers. Launchers can use other missiles of the Arrow family.

A little closer, a little lower 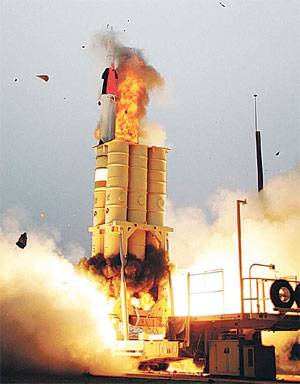 The second line of defense - in the atmospheric section of the missile flight - will be Arrow-2. According to the developers, the guidance system ensures reliable target capture in adverse weather conditions and when the enemy uses electronic countermeasures.

Hetz-2 redeployed missile defense system, including EL / M-2080 Green Pine radar, command post (CP) Golden Citron (Citron Tree) manufactured by Tadiran Telecom, Brown Hazelnut (Hazelnut Tree) missile launch control center, manufactured by the IAI, center communications, from four to eight launchers (launchers), Arrow-2 interceptor missiles, auxiliary equipment, including radar power systems and cooling systems, is designed to destroy tactical and operational tactical missiles at a distance of up to 100 kilometers and an altitude of up to 50 kilometers . It is assumed that he is able to intercept them at an approach speed of up to 4,5 kilometer per second, such as the Iranian MRBM Shahab-3B (range to 2000 km) and Sajil-2 (to 2500 km) or Scud. The Arrow-2 system is capable of detecting and tracking up to 12 targets simultaneously, as well as directing one of them to two PRs capable of speeding up to 2,5 kilometers per second.

PR Arrow-2 is equipped with a high-explosive fragmentation warhead. Theoretically, interception is a shock mechanical action resulting from a direct hit directly to the target. Currently, three Hetz-2 air defense systems are deployed: in 50 kilometers south of Tel Aviv, south of Haifa and near the city of Dimona, which provides cover for up to 85 percent of the territory of Israel.

The composition of the battery includes four PU with 24 PR, mobile command posts and radar. The calculation of each battery - about a hundred soldiers.

Wheeled transporters are used as the mobile base of the launcher, radar and gearbox.

Radar and gearbox integrated with combat control systems weapons THAAD (Terminal High Altitude Area Defense), Patriot (Patriot) and standard AN / SPY-1D (V) radar of the American shipborne anti-missile radar Ajgis (Aegis), which allows for the interaction and distribution of air targets between them.

Of the three Hetz-2 PRK batteries currently deployed, one is planned to be equipped with the Arrow-3 PR. It will be used for Israel’s first intercept missile defense system. 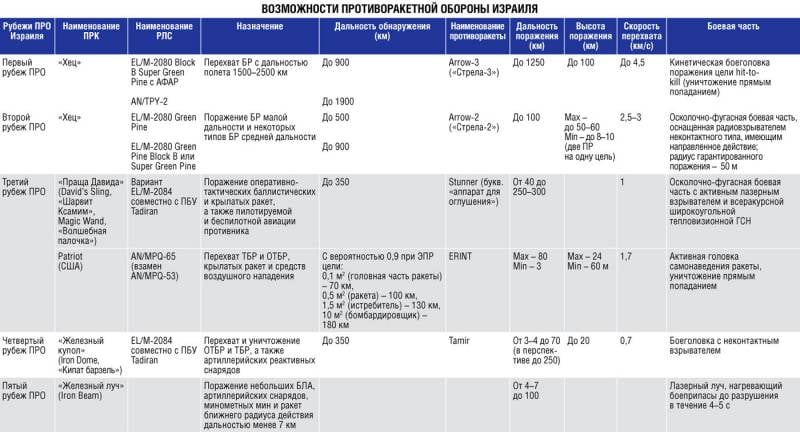 The interceptor in this missile defense system is a two-stage Stunner missile system, developed by Raytheon and Raphael, equipped with two types of guidance systems installed in the nose compartment - the radar and optical-electronic.

The Israeli armed forces in July 2016 put the first set of the "David's Aid" system on combat duty.

Considering the capabilities of the third missile defense line, we note that Patriot air defense systems will be able to hit targets at a distance from 3 to 40 kilometers at an altitude from 60 meters to 24 kilometers. The latest modification of the Patriot PAC-3 MSE with highly maneuverable PR MSE will be able to intercept tactical and operational-tactical BRs at ranges up to 40 kilometers and altitudes more than 20 kilometers, as well as cruise missiles and air attack weapons.

The Israeli Defense Ministry, together with Boeing, is implementing a program to create a more sophisticated modification of the antimissile system for this air defense system. The new PR of the complex will be capable of striking, in addition to any existing and promising aerodynamic targets, the enemy MRBM at distances from 70 to 300 kilometers.

Reyton and Raphael in August 2013 presented the fourth generation Patriot Advanced Affordable Capability-4 (PAAC-4) Patriot air defense system to the leadership of the United States Department of Defense, proposing to use Stunner's Prash David as one of the key components.

The fourth missile defense system will be the “Iron Dome” system - the protection against short and medium-range missiles that are launched in Israel from the Gaza Strip and South Lebanon.

According to tests, from 11 to 14 in July 2010, the “Iron Dome” did not miss a single missile of a conditional enemy. The complex was tested by Qassam unguided rockets (Qassam) used by Hamas militants, as well as 122-mm ammunition of Grad and Katyusha volley fire systems.

The peculiarity of the system is that it is capable of intercepting 120 caliber rockets and mortar shells at a very low altitude and at a distance of three to four kilometers. The “Iron Dome” can track several launches at the same time, instantly calculate possible trajectories and precisely launch counter-rockets, moreover, so that the residents are not affected by the explosion fragments. The system will be able to immediately determine which missiles will fall in an Israeli locality, and which will fly past in order to shoot down only those that pose a real threat.

The battery "Iron Dome" is able to use 60 interceptor missiles in one launch, protecting the territory to 150 square kilometers. The area may increase if enemy missiles are launched from a distance of more than 15 kilometers (up to 70 km). The battery includes a fire control center and three launchers with Tamir 20 interceptor missiles. It also includes the EL / M-2084 radar, designed to accurately identify and determine the flight path of a target.

Currently, 10 batteries of the Iron Dome air defense system are deployed in Israel. In the foreseeable future, it is planned to bring their number to 15.

Depending on the ballistic target, the joint work of several missile defense lines can be considered. From the MRBR - two echelons (Arrow-3 and Arrow-2), from the OTBR (TBR) - two echelons ("Arrow-2" and / or "Sling of David" and "Patriot" with comparable characteristics for combating TBR). Against tactical short-range missiles, there are also two echelons (“David's Ants” and “Iron Dome”).

The missile defense system is already proving its combat effectiveness. In the course of the antiterrorist operation “Cloud Pillar”, which was carried out in the Gaza Strip from 14 to 21 in November 2012, an increase to 87 was registered in the percentage of interceptions of the “Iron Dome” system of missiles that threaten residential areas. Of the 1506 missiles launched in Israel, the majority (at least 875 - 58%) exploded in open areas outside populated areas, 58 missiles - in city blocks (3,8%). The Iron Dome intercepted the 421 rocket. At the same time, an 501 interceptor missile was launched at targets that posed a threat to the population.

During Operation Unbreakable Rock, carried out in the Gaza Strip, from July 7 to August 26, 2014, the militants used 3360 missiles to destroy the military infrastructure of the Hamas movement and prevent attacks on Israeli territory. 584 of them were shot down by the Iron Dome system.

Plus the rays of death

The plans of the Ministry of Defense of Israel are to create in the national layered air defense system of the fifth active line - the mobile combat laser system “Iron Beam” (Iron Beam). It will be used against ammunition with a range of less than seven kilometers.

The system should ensure the protection of border areas and military facilities by delivering accurate strikes on aerodynamic targets such as UAVs, unguided projectiles, mortar mines and short-range missiles with a laser beam that heats the warhead before destruction. It is assumed that this is the best option at ultra-short distances, in which the “Iron Dome” air defense system proved to be less effective.

In addition, the Raphael C-Dome air defense system, which is being developed on the basis of the Iron Dome, is planned to be deployed on small warships of the Israeli Navy to repel threats from tactical and deck aviation, helicopters, as well as shock UAVs. The weapon system of the C-Dome SAM system includes ten SAMs. The multiple launch rocket launcher Tamir, the guidance of which is carried out on a source of infrared radiation, can provide simultaneous destruction of up to ten different types of targets.

What to take in a piggy bank

From the above we can draw the following conclusions:

The possibility of creating an effective missile defense system capable of intercepting with a high probability of various targets becomes a reality. Therefore, it is advisable to use the Israeli experience in creating a missile defense system of the Russian Federation, including deepening cooperation between our countries that have set common goals in the fight against the enemy, which is international terrorism.

It should be noted that sending C-400 to Syria as part of a peacekeeping operation is a good example of the use of air defense missile defense systems to combat terrorists and deter the United States and other states from aggression against Russia.