The actions of the group "Admiral Kuznetsov": what went wrong according to plan?

November 25, 2016
166
It can be said that the conclusions are somewhat premature, because only the first week has passed, as a group of our ships led by the TAVKR “Admiral Kuznetsov” operates in Syria. However, it can already be said that everything went somewhat differently as planned. 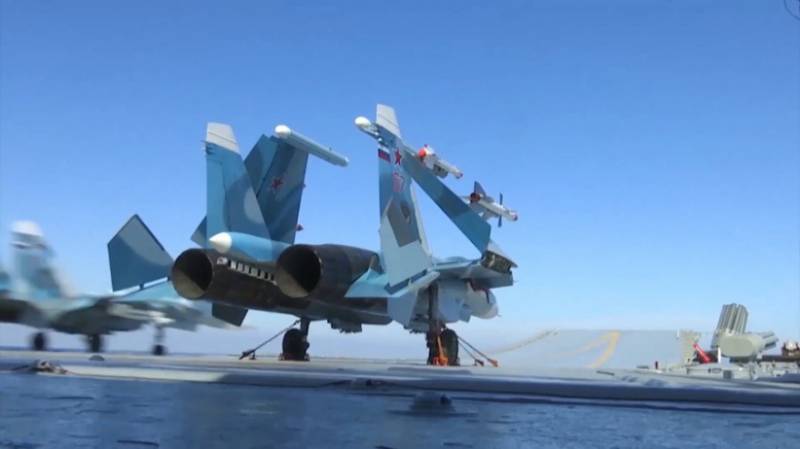 As I understand it, “Admiral Kuznetsov” was sent to the shores of Syria not at all because the air group in Khmeynim without its wing was unable to carry out its tasks. This is logical and understandable.

It is also clear that the Su-24M and Su-34 in combat capabilities are an order of magnitude superior to the Su-33 fighters and MiG-29K fighter-bombers. Su-34 capable of carrying up to 8 tons of bombs, Su-24M - 7,5 tons. Decked-wing aircraft have lower rates; Su-33 can maximize 6,5 tons, MiG-29K - 4,5 tons. And at Su-33 it will be exclusively unguided bombs. In addition, despite the apparent superiority of the load at the Su-33, the figure in 6,5 tons - this is in the form of overload. The combat equipment of the air-to-air fighter is more modest - 3,2 tons.

It is also clear that the composition of the air group in Syria can be quickly and cheaply increased by transferring additional bombers there. And for that, it is not at all necessary to drive an aircraft carrier with a cover group through half the world.

Undoubtedly, I believe that the main objective of the campaign was to accumulate experience in using the Russian deck aviation in a real war. Indeed, by and large, this campaign is really the first battle on the account of "Admiral Kuznetsov." “Demonstrations of presence” with several fighters on deck that took place earlier cannot be called serious.

Here we have precisely combat experience, in the conditions of military operations.

It is quite possible that this experience will be invaluable not only for deck aviation pilots, but also for those who are developing plans to build a Russian aircraft carrier of a new generation. The fact that work in this direction goes, we all know. The only question is the need to draw full conclusions about the advisability of using such ships.

It seems to me that it was precisely this that dictated the emergency situation, under the conditions of which the Kuznetsov campaign was being prepared. The facts confirm this.

From January to mid-June 2016, the cruiser was under repair in the 35-m ship repair plant in Murmansk.

From June to August, work was carried out in the 82 dock of the shipyard in Roslyakov.

How well and successfully the work was carried out, I will not comment, the “smoking aircraft carrier” became the talk of the town. But It is worth noting that the merit of the Russian shipbuilders in this is very significant, since to force a ship to move in accordance with the TTX, the power plant of which is a certain designer from parts of different ships, is a feat in our time.

This, by the way, testifies to the proper level of crew training.

Under normal conditions, this should be allotted at least two to three months. But this time at the disposal of the pilots was not. And in Soviet times, according to the instructions and instructions, the pilot was given up to three years to fully master the course of combat training.

None of the pilots of the 100 OKIAP had such an opportunity for training. But I already wrote about this. The 100 th OKIAP was formed a year ago, in December 2015.

I agree. But I will ask only one question: is there a difference in the development of a take-off / landing between ground concrete with a lifting squiggle and the deck of an aircraft carrier that is in motion in the open sea?

Something tells me that the difference is not just there, but very significant.

Apparently, time is running out. And already October 15 "Admiral Kuznetsov" with a group of ships went on his first combat campaign ...

And quite naturally, a MiG-29KR disaster occurred.

Naturally for many reasons. The main one of which is the MiG-29KR / KUBR, which did not complete the state tests complex. Today they are not even officially adopted yet.

6 September 2016, Major General Kozhin, commander of naval aviation, said: “While the tests are underway, therefore, we cannot say about the future. So far, everything is positive. We have already carried out a large part of the tests, but in general they are calculated up to the 2018 year. Aircraft will still be used to a certain extent. Testing is a long process, but the lion's part of the tests concerning the ship, we will do this year. ”

That is, conducting state tests in combat use. And here there are a lot of pitfalls, one of which is the low quality of components that has already become a reality.

It is no secret that this catastrophe is not the first for the MiG-29KR. During the tests, the MiG-29KUBR was lost in June 2011 of the year in the Astrakhan region. Both pilots died. And in June, 2014, another aircraft crashed in the Moscow region. The pilot also failed to save.

The blatant inadequacy of the MiG tests obviously had to turn a blind eye in order to either really need to test the aircraft in combat conditions, or for the sake of triumphant reports.

Naturally, after the crash in the Mediterranean Sea, a MiG-29KR flight was banned. And here a very sharp question arises: how quickly and is it even possible to determine what caused the catastrophe?

According to the pilot's report, both engines suddenly stopped. Preliminary findings - the failure of the fuel supply system. But without decoding the data of the “black boxes” to answer all the questions is unrealistic. Again the question: can they even raise a sunken plane, and how quickly?

As a result, MiGs were chained to the deck, and Su-33 crews began to make sortie flights. On bezrybe, as they say ...

By the way, 15 and 18 November sorties are the first in stories cases of combat use of deck fighters Su-33. And at the same time - the first use of these aircraft for ground targets.

The value of these sorties is more than doubtful, since the Su-33 was originally created exclusively as fighters for air cover of our ship connections far from its shores.

None of the developers had ever planned to destroy objects on land using Su-33. This became possible only in recent years, after the additional equipping of such combat vehicles with the special computational navigation subsystem SVP-24-33 Hephaestus, which allows the use of unguided 500-kilogram and 250-kilogram free-falling bombs with an accuracy characteristic of controlled ammunition. According to the developers, "Hephaestus" in 3-4 times increases the efficiency of the use of aircraft weapons for ground targets.

But still it is rather an option.

The main advantage of the MiG-29KR / KUBR over the Su-33 is not in the number of means of destruction of ground targets, but in quality. Su-33 - first and foremost a fighter. MiG-29KR - fighter-bomber.

The main difference between the MiG and Su is in the multipurpose 010 “Beetle-M” radar, which makes it possible to detect objects of impact at a distance of up to 110 kilometers against the background of the earth’s surface and at the same time to map the terrain.

Su-33 can not do this. It has the only airborne radar "Sword", working, as it should be for an interceptor fighter, only in the "air-to-air" mode. Low-contrast targets on earth can not distinguish between the "Sword".

The appearance of Su-33 sighting systems SVP-24-33 "Hephaestus" located on the "Admiral Kuznetsov" Su-XNUMX partially offset this lack of them, but did not reduce it to zero. Alas, but so far only “drying” takes part in combat missions. With all the consequences.

In general, the operation with the use of TAVKR "Admiral Kuznetsov" still causes a slight surprise. Hastily repaired (and not brought to mind initially) ship, aircraft that did not complete the test, and pilots who did not undergo proper training.

Did all this have to be neglected in order to gain experience in the combat use of Russian carrier-based aviation in a real war?

But sorry, what are the costs, so will the result! There is such an old Russian proverb: "Hurry up - make people laugh." Well, the world has already mocked enough of the "smoking aircraft carrier." Glory to the crew, coped with the problem. Do not smoke.

Now the second item is on the agenda. MiGs. The ban on flights (absolutely fair) threatens that the planned combat experience in the use of these aircraft will be greatly underestimated, if at all.

The question arises: was it necessary to drag such a grouping of ships across half of the world in order to work out the use of fighters for ground targets? I emphasize fighters, not very intended for this?

Maybe it was not worth it to hurry?