Israel has developed a drone with a detector of explosives

November 24 2016
14
Unmanned aerial vehicles have “mastered” reconnaissance for quite some time and are now actively used in this area. However, with rare exceptions, we are talking about observation of the terrain using optical-electronic means. At the same time, new developments in the field of drones are proposed, the purpose of which is to solve new special problems. A few days ago, the creation of the world's first UAV, capable of detecting explosives, was announced. This unit is called LDS SpectroDrone.


The existence of a promising project involving the implementation of new special tasks was announced on November 15. Israeli company Laser Detect Systems (LDS) has published an official press release on its new development. On the eve of the HLS & Cyber ​​Expo, held on November 15-16 in Tel Aviv, the developer company decided to disclose information about some elements of its exposition. The topic for one of the posts was a project called SpectroDrone. The purpose of this development is to carry out control over certain objects with the search for explosives and potentially dangerous objects. 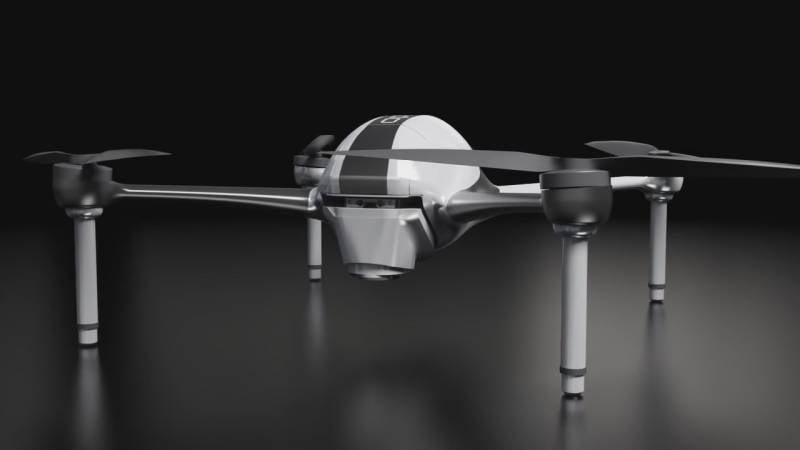 General view of a UAV with SpectroDrone system. Shot from the commercial

It is reported that the product SpectroDrone is the world's first UAV, capable of finding explosive devices and explosives, including those located behind obstacles. At the same time, the drone can work at some distance from the operator, and also has the opportunity not to approach a small distance to the object being examined during operation. The obtained characteristics and capabilities are the result of combining two developments, namely, a quadrocopter platform and a modern laser detector operating on the principle of a spectrometer.

As the basis for the UAV with the spectrometer of the LDS company, the Optimus device developed by the Israeli firm Airobotics was chosen. It is a relatively light machine with four propellers, which has the required set of equipment to control and solve various problems. In addition, this drone has a carrying capacity sufficient to transport the spectrometer. After some minor improvements, the Airobotics Optimus product became the carrier of the SpectroDrone system. In this configuration, the new Israeli development was demonstrated at a recent exhibition.

In terms of the main features of the design, the Optimus UAV differs little from other modern technology in its class. The basis of the design of the device is a complex-shaped body made of plastic. The composition of the plastic units has a large streamlined fuselage of characteristic shape, to which are attached four beams with engines. The project involves the use of four electric motors with their own propellers. Directly under the engines on the beams of the apparatus are mounted racks used as chassis. In case of an emergency landing, the device is equipped with a parachute. 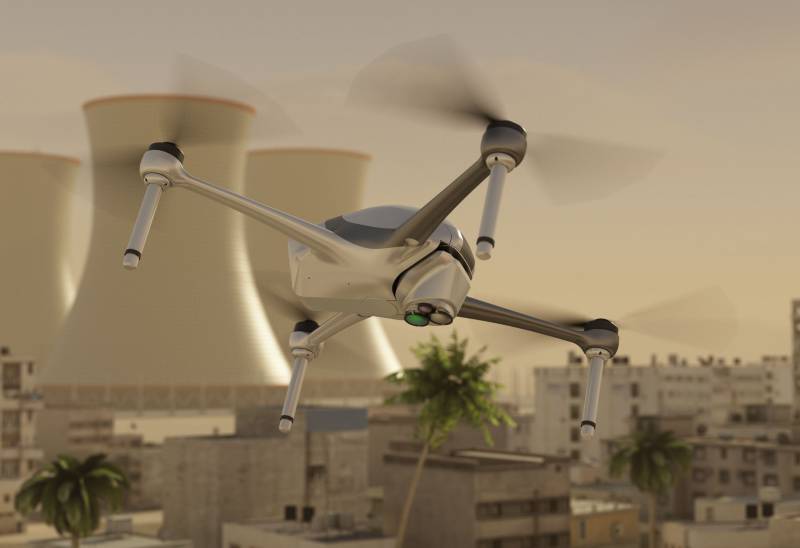 General view of the drone during the solution of tasks. Figure Laser Detect Systems / Laser-detect.com

Airobotics Optimus has the most automated control system capable of independently and without the participation of the operator to carry out various operations. So, having received a program of actions, the drone can independently take off, go to a given area, or start patrolling along a specified route. Due to the automation also improves the capabilities of the device during continuous operation. To determine its own position, the device uses satellite navigation. The accuracy of determining the coordinates, according to the developer, reaches 1, see

For transportation and operation of the UAV, the manufacturer offers a special container. Inside this product is placed a complete set of equipment necessary for the operation of the drone. The device itself in the transport position is placed in a special slot at the top of the container and closed with a sliding lid. If necessary, take-off elements of the roof diverge to the side, making room for lifting.

In the original version, the Israeli-developed drone carries only optical-electronic equipment that allows piloting and observation of the terrain. The LDS project proposed the use of a new special-purpose payload. With its help, the operator of the complex will be able to find potentially dangerous objects and determine the degree of risk, revealing the presence of explosives. It is noted that the payload for the Airobotics Optimus UAV is performed in the form of interchangeable modules. It takes minimum time to replace a module and, as a result, change the tactical role of the vehicle. 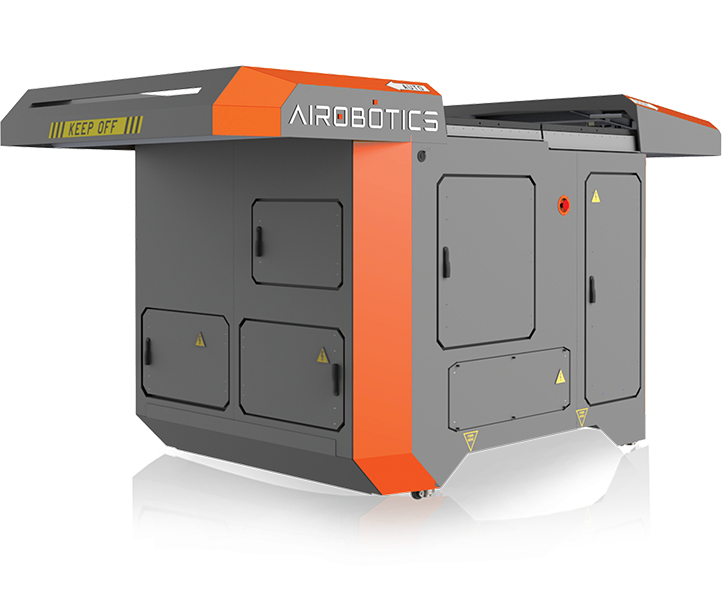 The product SpectroDrone is a block with a set of various equipment used in the search for traces of certain chemicals. As part of this device there are several opto-electronic devices equipped with their own laser emitters. The latter generate radiation with different wavelengths. The detector also includes a laser rangefinder and a high-resolution video camera. To process signals coming from different components, the detector is equipped with a control system that uses special algorithms. The primacy of the company LDS in the creation of such technology is confirmed by patents.

During operation of the drone equipped with a detection system, the elements of the SpectroDrone product in automatic mode should be monitored. Several lasers in different ranges emit light directed to the object being examined. Next, the optics collect the reflected radiation and process it using a special algorithm. The presence of certain features of the reflected light indicates the presence in the air of certain substances. Declared the possibility of identifying substances that are in solid, powdered or aerosol state.

The proposed principle of operation allows the use of the SpectroDrone system in various fields, but the developer has adapted it for use in the field of explosives search. Signal processing algorithms are designed to take into account the characteristic features of such compounds. It is argued that the signal processing system allows to bring the lower threshold of the concentration of the detected substance to the minimum values. Also declared a decrease in the number of false-positive and false-negative positives. According to the press release of the manufacturer, the new detector has characteristics at the level of laboratory samples. 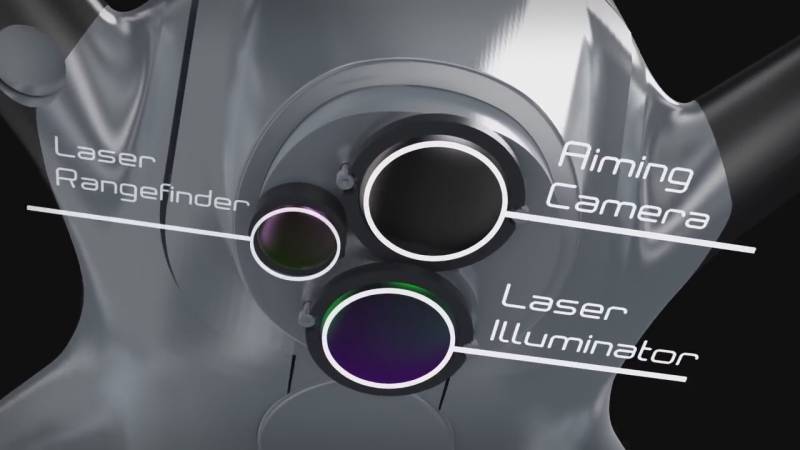 Placement of optical devices. Shot from the commercial

The proposed method of applying promising technology is quite simple. According to the commands of the operator or under the control of automation, the UAV platform must go to the target area. In the case of the Optimus UAV, the range reaches 3 km. After reaching the desired position, the target equipment is connected to work. It independently studies the state of the atmospheric air near the object under study and detects the presence of explosives or other dangerous compounds. Information about the state of the air next to the target is transmitted in real time to the operator’s console. After receiving accurate data on the presence or absence of explosives, the operator of the complex can transfer all the necessary information to the sappers, who will work with a dangerous object. At the moment, the range of inspection of objects is limited to only a few meters, which is associated with the peculiarities of the operation of laser equipment.

In the proposed form, an Optimus unmanned aerial vehicle with a SpectroDrone spectrometer can be used in various fields. First of all, this technique is of interest to the armed forces and special services who need the means to search for explosive devices of one type or another. In this case, the drones can be used to search for improvised explosive devices in the path of the convoys or to protect various objects from possible attacks with the use of explosives. The UAV with the special equipment in theory will allow to find the threat in time and take the necessary measures.

At the same time, a compact spectrometer, carried by a drone, can be used in other areas. The ability to search for certain substances in the air can be useful in many other areas. The production process of some industries is associated with the risks of the appearance in the air of substances that are dangerous to humans and equipment. Light detectors may well be used as a hazard warning device. In particular, such equipment may be of interest to mining companies that need hazardous gas detection systems. 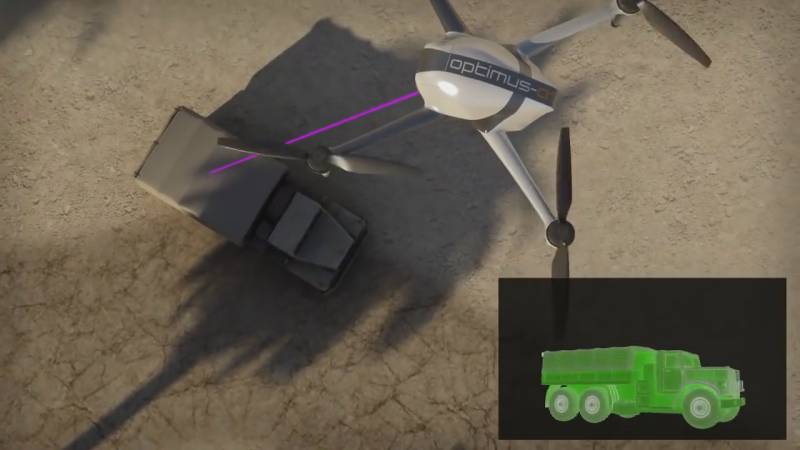 Demonstration of the system. Shot from the commercial

The SpectroDrone system also has a certain potential in terms of use in disaster management. The ability to monitor the situation with a set of optical instruments and perform spectrometry can significantly improve the situational awareness of specialists.

In its current form, SpectroDrone-type spectrometric equipment is a compact unit designed for installation on one of the existing unmanned aerial vehicles. In the future, the list of carriers of such equipment may increase. Due to its small size and weight, a new type of system can be installed on other types of UAVs with different characteristics. In addition, the company-developer mentions the possibility of adapting the complex for use on ground platforms.

The light unit of the SpectroDrone system after some changes will be able to be installed on ground-based remotely controlled robotic systems. Also the carriers of the detector can be cars of existing models. Due to the use of a different type of carrier, the scope of application of the equipment may vary. Thus, in the future, the manufacturing company will be able to offer customers a fairly wide range of modifications to the new system, adapted to solve various problems. 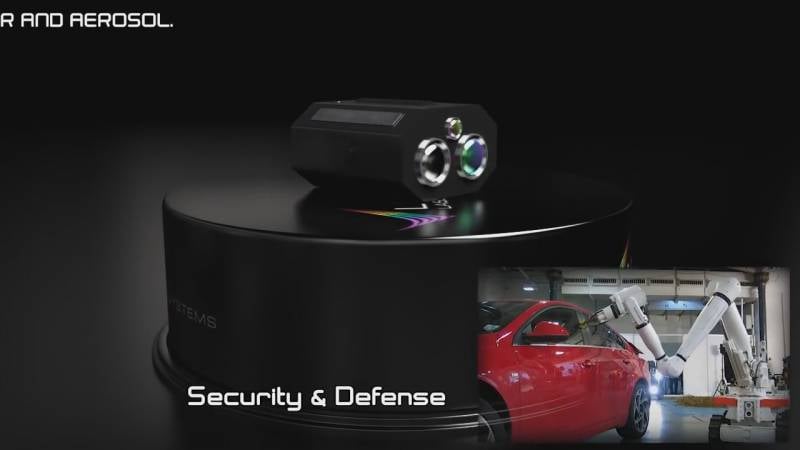 The product SpectroDrone without media. Shot from the commercial

Obviously, the proposed project is not without flaws. One of the main restrictions may be considered on the distance from the object being studied. You also need direct visibility with no serious interference. The need to approach a distance of several meters does not allow work to be done covertly, and this may interfere with the solution of some military tasks. In addition, effective work can be difficult due to the peculiarities of the landscape and the location of the suspicious object.

The latest development of the Israeli industry is of great interest. For the first time in world practice, an unmanned aerial vehicle was able to be equipped not only with optical-electronic surveillance systems, but also with specialized equipment capable of searching for certain substances. The stated characteristics and capabilities, as well as the lack of direct analogs, allow Airobotics and LDS companies to count on a certain interest from potential customers and wait for the signing of contracts for the supply of production equipment. An additional incentive for the appearance of orders for SpectroDrone systems can be a modular architecture that provides the use of special equipment along with various carrier platforms.

Nevertheless, it is too early to talk about the real prospects of the project. The original development was presented to potential customers just a few days ago, so that future buyers could simply not have time to form their opinion and decide on the need to purchase equipment. If the SpectroDrone complex is really of interest to future operators, the first supply contracts may appear in the foreseeable future.

Ctrl Enter
Noticed oshЫbku Highlight text and press. Ctrl + Enter
We are
Innovation Day of the Southern Military District: Pictures from the ExhibitionThe action “Military service under the contract is your choice!” In Rostov-on-Don: future contract servicemen, exhibitions and “Russian Knights”
14 comments
Information
Dear reader, to leave comments on the publication, you must to register.