Why did you stop flying to the moon 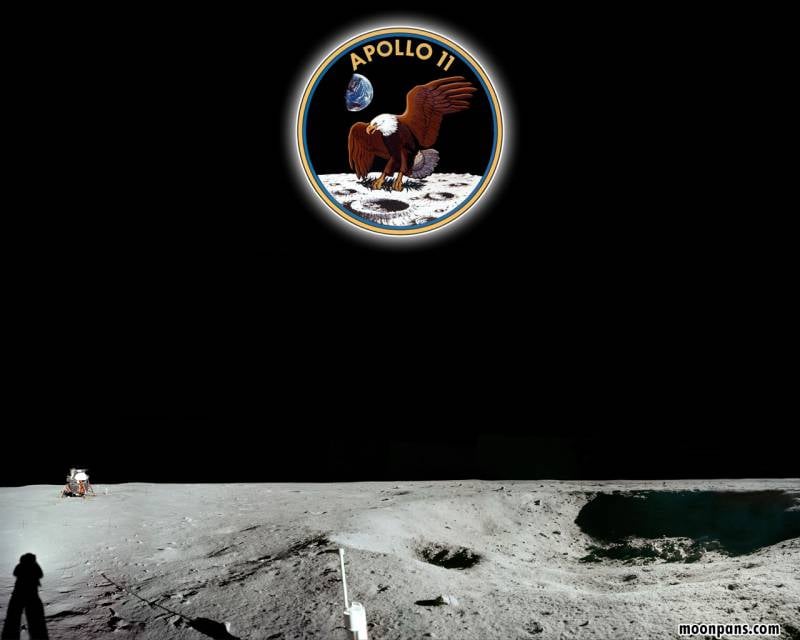 The first circumnavigation took place in the 1520-ies of the squadron commanded by Fernand Magellan. The heroic campaign almost ended in disaster. Of the five ships, only one of them was able to go around the earth, and only 260, from which the Magellan was no longer, returned from the 18 team.

The first voyage around the world - the beginning of the XVI century. Do you want an interesting question?

In what year did the next round-the-world tour take place?

The next attempt to repeat the achievement of Magellan failed. All seven ships of Garcia Hofre de Loays disappeared into the ocean. Ten years later, only 8 sailors from the de Loias expedition captured by the Portuguese were able to return to Europe.

As a result, the second, somehow successful, "Around the World" was the British expedition 1577-80. under the command of the explorer and pirate Sir Francis Drake. Half a century after Magellan! And again, swimming was not without loss. Of the six ships of the Drake detachment, only one came back — the flagship Pelican, renamed the Golden Doe. 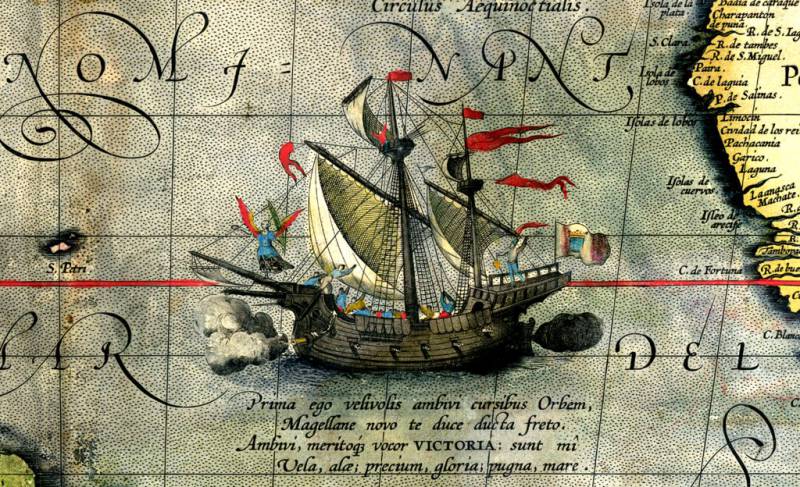 Despite the appearance of maps, new devices and technologies, round-the-world expeditions remained a deadly exotic for a long time. And their participants deservedly received laurels of glory. Like, for example, navigator and discoverer James Cook, although it was already the 18 century. By the way, the Cook expedition was remembered by the fact that for the first time in a round-the-world voyage, none of the sailors died of scurvy ...

The moon from heaven, the cosmic cold, brings its cold light to earth

Why did the topic of space flights begin with expeditions of the XVI-XVIII centuries? Where is the link between Lt. Neil Armstrong (Apollo 11) and Adelantado Magellan (Trinidad)?

Indeed, Armstrong was in much more favorable conditions than the Portuguese.

Armstrong knew the route and had an idea about everything that could have happened on his way. Before him, automatic stations “Surveyer-1, -2, -3, -4, -5, -6, -7” were landing on the moon (five successful landings, two crashed). The “inspectors” conducted reconnaissance of future landing sites, transmitted panoramas of the lunar surface and data on the density of the soil. The sixth "Surveyor" had a more complex program: after working in one place, he turned on the engine and flew to another area. 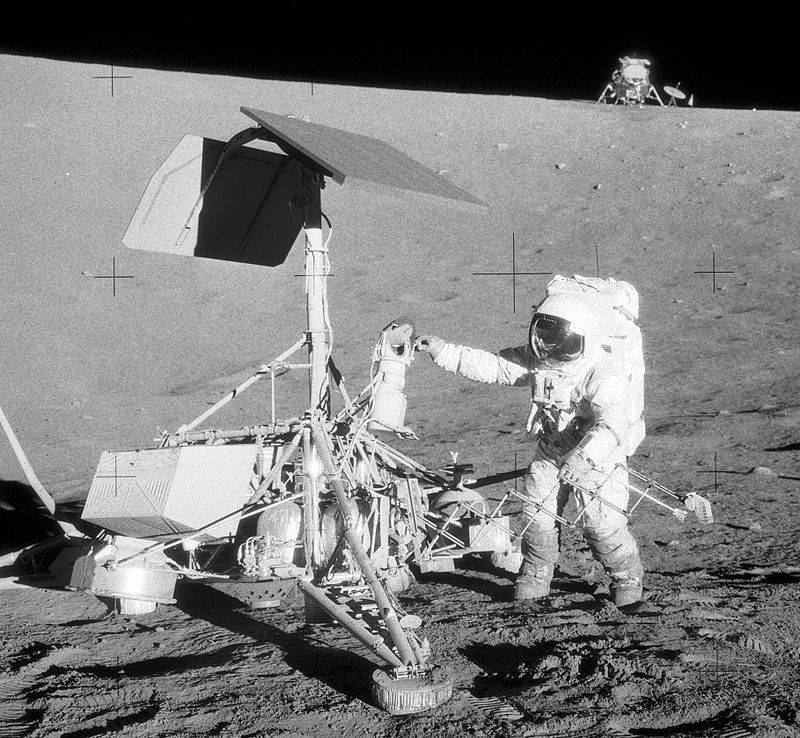 Apollo-12 was able to wind up in 300 meters from AMS Surveyor-3 ". The crew was tasked to dismantle a part of the probe equipment that had stayed on the Moon for three years
By the way, did you notice the number of Armstrong's ship? Why "11"? What happened to the previous Apollo 10s?

Apollo-8, 9 and 10 (commanders Bormann, McDivit, Stafford) - landing rehearsals. The eighth Apollo made a manned circling of the moon and testing the entry into the Earth’s atmosphere with a second cosmic velocity. The ninth - undocking and rebuilding of compartments in open space. Apollo-10 - dress rehearsal, with access to the circumlunar orbit, rebuilding of the compartments, maneuvering and reduction of the module to a height of 14 km above the lunar surface (without landing).

The rest of the Apollos are three unmanned and one manned space flight with a complex test of a ship and a Saturn-V rocket in Earth orbit. Plus, the unnamed launch of AS-203 and the tragic Apollo 1 with the death of astronauts in training. Apart from two dozen other flights under the Apollo program, during which various elements of the upcoming landing were tested.

All that was left for Neil Armstrong was to complete the work he had begun and to “mobilize” his module in the Sea of ​​Tranquility. All other stages of the flight were repeatedly tested and studied thoroughly.

The Soviet lunar program moved in a similar way. The continuous test cycle of equipment, spacecraft, spacesuits and launch vehicle - on earth and in space. Six soft landings of automatic lunar stations, incl. with rovers-moon rovers and take-off from the lunar surface (delivery of soil samples to Earth). 14 launches on the secret program "Probe", during which four ships (unmanned versions of Soyuz, 7K-L1) made a successful circling of the Moon and returned to Earth. And behind the secret indexes “Cosmos-379”, “Cosmos-398” and “Cosmos-434” were hiding tests of the lunar module and conducting a cycle of maneuvers in orbit.

Returning to the comparison of the Apollo with the pioneers of the XVI century. Unlike Magellan, who was leaving to the unknown, Armstrong had a stable connection with the Earth. From where he received all the necessary calculations, tips and instructions in case of failure of any equipment.

Even in spite of the constrained conditions, the spacecraft provided, unlike, for example, a higher level of comfort and standards of food on board than the 16th-century Portuguese caracaques. Rotten corned beef, poisoned water, rats, dysentery and scurvy. There was no need to worry about anything like Lieutenant Armstrong.

No one expressed hostile intentions to Armstrong all the way, his crew consisting of Aldrin and Collins did not organize rebellions, and the absence of an atmosphere on the Moon simplified maneuvering and eliminated the danger of storms and storms - from which the navigators of the past suffered. 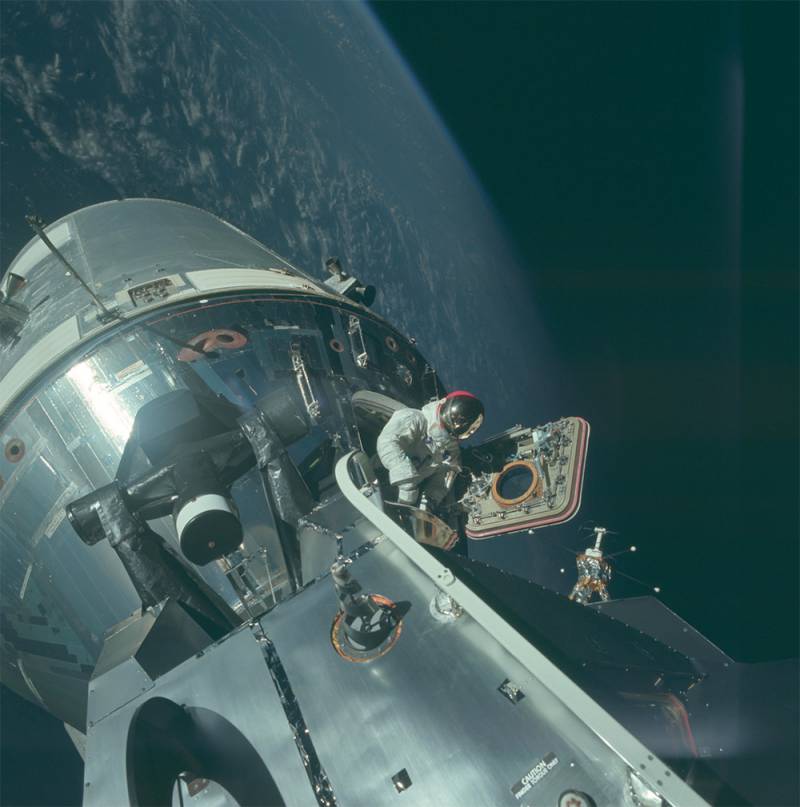 Perhaps that is why the Apollo lunar expeditions ended with almost no losses, not counting the explosion of the tank in the Apollo 13 service compartment, due to which the crew could not land on the surface (manned flyby of the Moon in emergency mode).

Such a "tin", as in the XVI century - when only one of the five ships returned (or no one returned!), Was no longer observed.

But the expeditions of Armstrong and Magellan united one main feature. This is an unjustified risk. In the end, all the achievements and dividends from these expeditions were far beyond the real benefits (there was not even talk of immediate commercial success). In the first case - unstable international prestige, in the second - the search for a western passage to India.

Realizing this, the European seafarers on 50 years, "froze" attempts to repeat the "Around the World" Fernand Magellan. And then, for another couple of centuries, they didn’t particularly rush there. Although less dangerous and cost-effective flights to India and America instantly found success.

Here again there is a brilliant analogy with the cosmos. Nobody flies to the moon, but manned and unmanned launches follow one after the other. There is a functioning space station, the orbits are filled with civil and military satellites.

We see a temporary refusal to repeat too distant, dangerous, but at the same time devoid of practical expeditions. Until better times ... Probably, this is the answer to the question of why neither we nor the Americans are yet aiming for the moon.

Any mention of Neil Armstrong provokes a powerful reaction among supporters and opponents of "Americans on the Moon."

As we can see, the explanation “once they don't fly today means never fly” can only make Fernand Magellan laugh. As for all sorts of technical issues, the more you delve into the topic, there is less and less doubt about the intellectual level of those who doubt Armstrong's landing on the moon.

Arguments about the "fluttering flag" leave on the conscience of housewives. We have more serious aspects on the agenda.

1. None of the Soviet scientists and astronauts has never denied the reality of the landing on the moon. Not in private, not even in the face of the all-powerful USSR. Which, if I knew something, I did not miss such a chance and wiped America into powder. And he would know quickly - with his all-knowing KGB, reconnaissance satellites and espionage capabilities!

2. Start 3000-ton "Saturn" in front of all of Florida and thousands of tourists, specially arrived that day at Cape Canaveral. And so - thirteen times in a row!

3. Scientific equipment and seismographs that transmitted data from the moon for seven years, which were accepted both in the United States and in the USSR.

4. Laser reflectors that are still there. With their help, any observatory can measure the exact distance to the moon. Of course, they were laid out on the moon by American robots.

5. A similar Soviet lunar program ... which was not there? 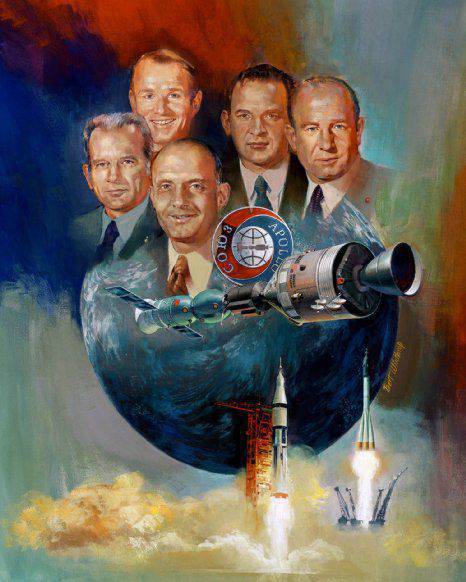 6. There was no docking of the “Union” with the American “Apollo”, July 15 1975. After all, it is obvious that the heavy ship Apollo did not exist, and the memories of A. Leonov and V. Kubasov (members of the Soyuz-Apollo mission) were fiction. 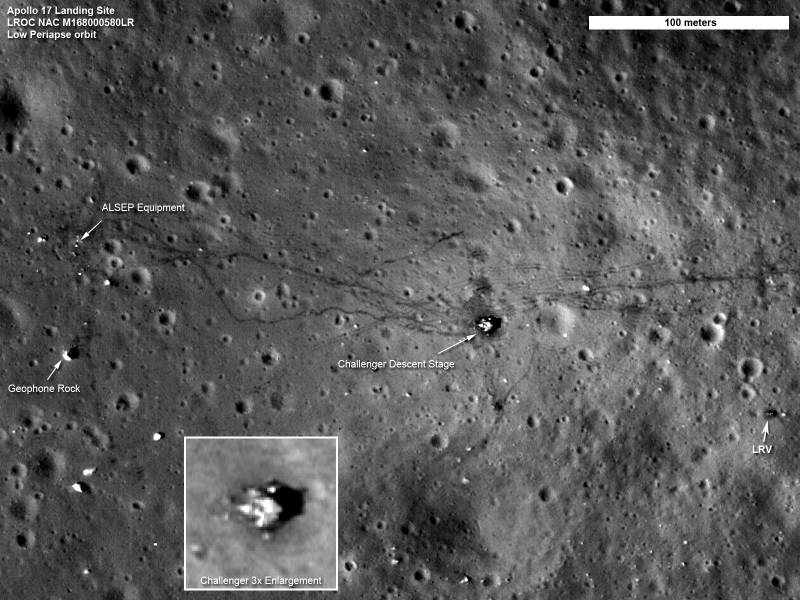 8. Under pressure from irrefutable evidence, skeptics are ready to recognize the possibility of any stage of the expedition (the existence of the Apollo 30-ton ship, the numerous starts of Saturn, circling the Moon), except for the landing itself. For them, it is like a sickle in an important place. From the point of view of a typical supporter of the "lunar conspiracy", the moon landing is the most difficult and incredible moment. They are not embarrassed by the abundance of personnel piloting aircraft with vertical takeoff and landing (Yak-38, Sea Harrier, F-35B). Sea pilots miraculously put fighters on the swinging decks of ships. At night, in the rain, in the fog, fending off sudden gusts of cross-wind.

Despite all their training, Armstrong and Aldrin could not do this together.

9. In conditions of low gravity, the lunar "Eagle" engine barely hissed - its max. traction was 4,5 tons, and he had enough for the eyes. Against 10 tons on deck Yak engines and 19 tons on roaring monster F-35. Four times more powerful than the lunar landing stage!

10. For some reason, cosmic rays and “death belts” spared living creatures aboard Russian Probes. They circled the moon and returned safely to Earth. Deadly radiation does not destroy the fragile electronics on board automatic stations flying for decades in open space. Without any lead protection 1 meter thick.

No one argues with the danger of a long stay in space, but a week is too short a time for the start of dangerous changes in the body.

As for the 40-year break in the exploration of the moon, we are dealing with a repetitive history. Humanity, represented by individual heroes, makes a breakthrough with the sole purpose of proving to itself: “YES, WE CAN!”. Then there is a long waiting period (decades, centuries). Until then, until the technology that will allow to make such travel without a significant threat to life. Or, at least, the need for such expeditions for the needs of the economy and defense will be indicated. 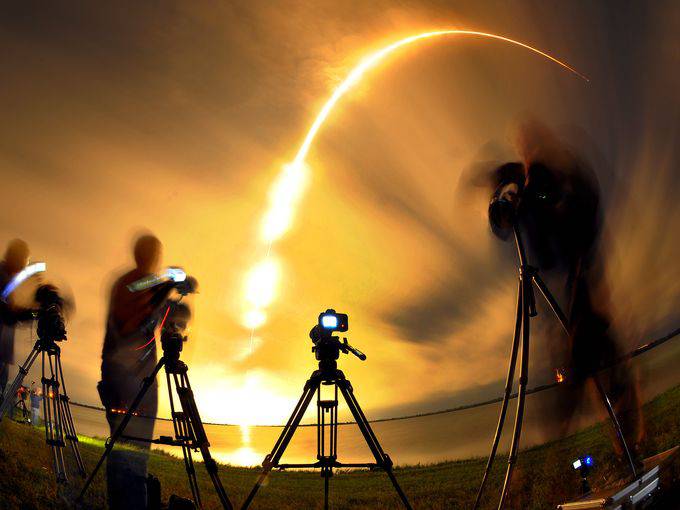 Ctrl Enter
Noticed oshЫbku Highlight text and press. Ctrl + Enter
We are
Forty-fifth Expedition to MarsOur path lay across the moon ...
231 comment
Information
Dear reader, to leave comments on the publication, you must to register.