Answers on questions. About machine gun belts as part of equipment

November 15, 2016
53
I continue to answer the questions of our reader Alexander. The second question was a photo of the times of the Great Patriotic War and a question of this content: 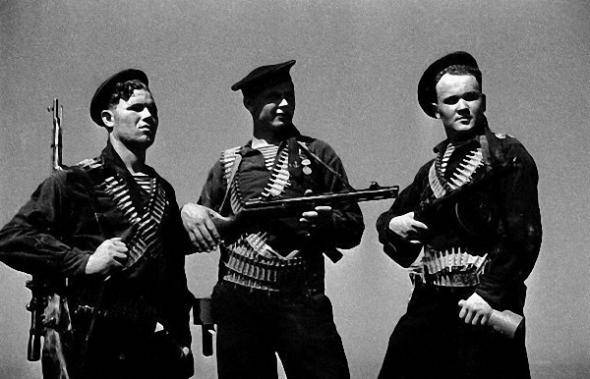 “And for what purpose were they worn? Blatant chic? Or to help machine gunners? Like a cartridge belt, they seem to be not very, there you will be tired of pulling out the cartridge, especially if the tape is wetted (which is inevitable with such carrying) and dried up. Or froze. She and the machine gun will go crazy. Some kind of garbage is obtained. "

Versions have been considered a lot. And, having pushed away from the fact that the sailors were girded with machine-gun belts mainly on the photo, the following happened.

A certain tradition originates from the time of the First World War. And with fleet.

When it turned out that the plane and the airship is not a circus attraction, but an aircraft capable of throwing not only leaflets from the air, but also quite tangible bombs or tanks with a combustible mixture, of course, the belligerent countries began to pay attention to air defense. More precisely, to adapt the weapons systems at their disposal to the firing at air targets.

The main machine gun at the time in the Russian army was the "Maxim". He registered on the ships.

Where were installed machine guns to deal with airplanes?

Naturally, where this airplane could be seen. That is, as high as possible, at the posts of observers, signalers and range-finders. In the "nests" on the masts, on the battle mars platforms and similar places. This is closer to the Second World War, the ships acquired PUAZO, and anti-aircraft guns could be placed anywhere. But at the beginning of the 20 century, machine guns and guns were installed as close as possible to the observers, that is, to those who could carry out target designation. 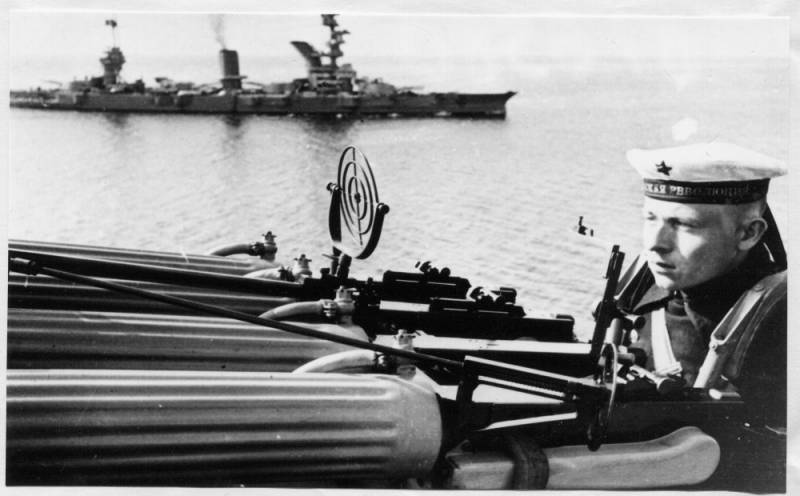 Photos of the First World is very small, but here is a photo of an anti-aircraft gunner from the "October Revolution". So, in the background - "Marat". You can estimate the height at which the zenith calculation is located. 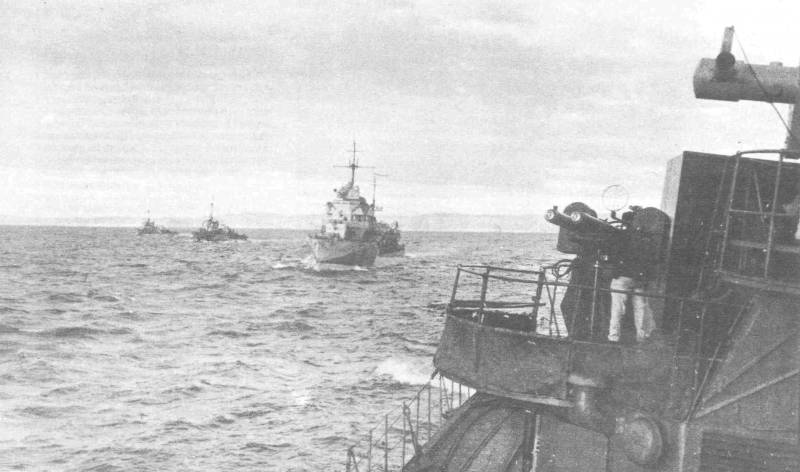 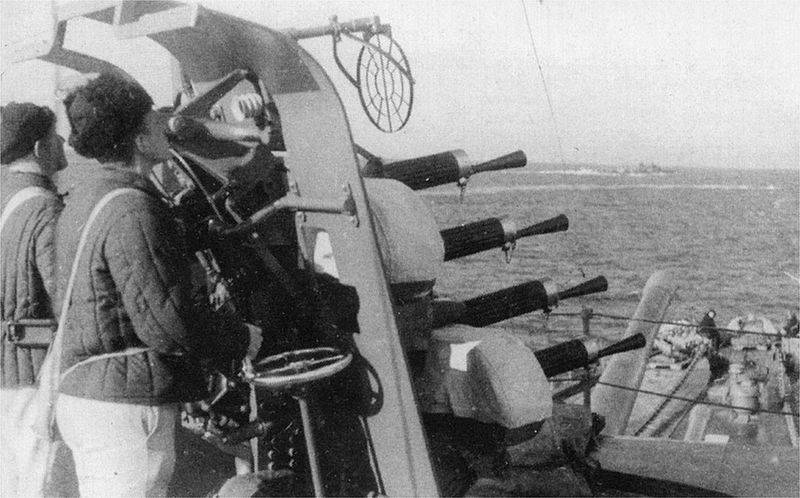 Accordingly, there was a problem with the filing of cartridges. Yes, you can (and should) store a certain ammunition at the ZU post. But the ship is somewhat less suitable for this. Here and pitching, which increases as it rises over the deck, and aggressive environment in the form of moist sea air saturated with salt.

But in general, it was simply not planned to create air defense posts, but I had to.

On the Mars-platform climbed on brackets-ladders. It is possible that the maritime tradition of girding arose from this need - to deliver ammunition to the machine gun in pitching conditions. Sailors, especially Russians, were from time immemorial invented much. In terms of facilitating your life. That's why they figured out by climbing the ladder and dragging a box of tape on themselves. Or you need to keep the box in your teeth, or come to terms with the prospect of downhill on the deck. So they came up with a girdle.

I do not know how you, dear readers, I "went." Everything is very logical. Plus, the irrepressible thrust of the sailors to the “Pontes”. As a sign of a certain difference, they say, I do not sit out in the hold, but I do business in battle. Which, by the way, is also true.

We now turn to the events about which the question was actually asked.

Our fleet in the Great Patriotic War, let's say frankly, fought in such a way that it could not afford to send sailors to the marines. Some ships remained with a minimum crew in the ports, and the personnel left to fight on land.

And here the sailors reappear, re-belted by machine-gun belts. 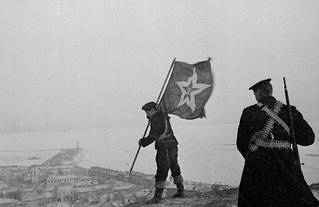 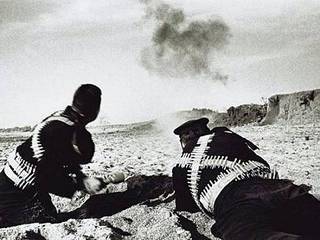 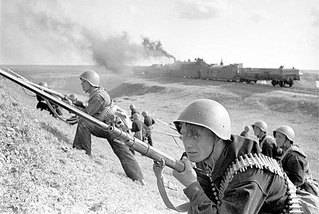 Here I chose two from a variety of versions.

Version one. Lack of equipment, especially in the first time.

I agree with those who expressed the opinion that ribbons on sailors are peculiar cartridge belts. Indeed, a rifle in a naval crew is not the most important thing. They all have something to do besides carrying guard duty. And in the battle on the ship shooting weapon without any need. It's time for the boarding.

In general, according to the regulations, the sailor had to have two two-section cartridge pouches of the 1937 sample in the equipment. For 7,62-mm rifles of the 1891 / 30 sample. For the Red Navy armed with the SVT-40 self-loading rifle, instead of the right cartridge bag obr. 1937 was issued a bag for two stores or a unified cartridge bag.

The issue of availability is cleared, for in photographs these items are practically not found.

Staff wearable ammunition of the time - 120 cartridges. In the case of sailors, the standard equipment corresponded to the infantry, differing only in the black color of the leather elements. These are pouches for "Mosinka", SVT, spare cartridge bags, chest cartridge holders, belt cartridge belts. In the initial period of the war there were canvas ersatzes instead of regular leather ones. It is more convenient to get the cartridges from there, loading the weapon, given that the cartridges in the clips are made faster.

In addition, cartridges are less susceptible to contamination. 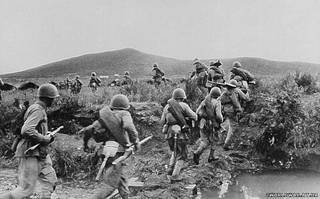 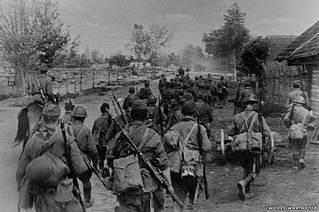 But for some reason, the ground infantry has no ribbons on the fighters ...

Apparently, there is a so-called “naval chic” here. On the one hand, the obvious lack of equipment, on the other hand, quickly recalled the tradition of the First World War and the Civil War.

Plus, it is worth remembering that the naval form of that time differed from the land one by a smaller number of pockets. So, all that remained according to the principle “I carry everything with myself” is to wrap myself up with a machine-gun belt. Here and 250 ammunition with him, and (importantly) the weight is evenly distributed throughout the body. 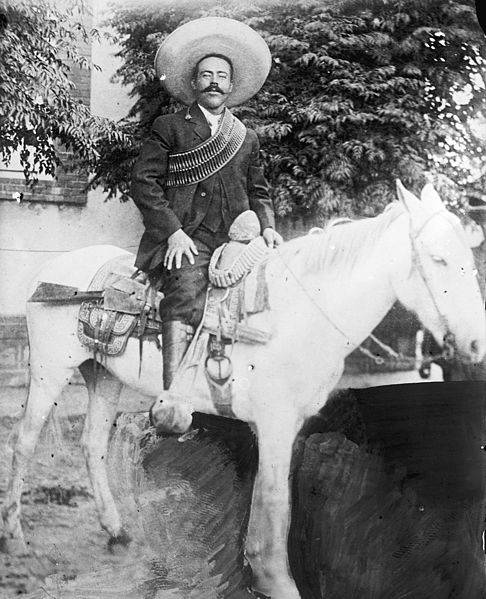 By the way, the topic is not new ... Many have practiced this method.

The second version came from photos that were taken at the time when the crisis was over. But still ribbons on the sailors attended. Moreover, as in this photo, which was sent by Alexander. The tapes on the fighters for whom these cartridges are exactly the same as the BC will not come in handy, because there is already a PCA.

Does it make sense, except for "fleet chic"?

It turned out there.

Marines - a special kind of troops. Yes, the Marines were used purely in defensive battles such as the Nevsky Piglet or the defense of Sevastopol. However, the series of landing operations went further, especially on the Black Sea. Landings from ships.

Standard BC to "Maxim" of that time was 2500 cartridges, that is, 10 tapes. Each weighing about 6 kg. Why do I take "Maxim"? Because SG-43 went much later, but the DP still was a light machine gun of pure infantry support, and was inferior to the “Maxim” both in the rate of fire and in the range. So all the same "Maxim" ...

Go ahead. The landing. From ships, from boats, from motobots ... Without a difference. The essence is the same: under enemy fire, you often need to siganut from the board into the water, get to the shore, find shelter there from bullets and shrapnel, and proceed to the task.

This is still a pleasure ...

But we are talking about delivery issues. Here for the machine gunner "paradise" is the opposite. Not only do we need to deliver the body of the machine gun and the machine to the shore, as well as the BC.

In the land forces everything is easier. According to the 12 chapter “Easel machine gun service” of the manual for an infantry fighter from the VIKA VCKA Combat Training Directorate (1938), the calculation for the Maxim machine gun consisted of as many 4 people aside from the long-range observer and the squad leader who worked for all three branches of machine gun platoon.

2. Assistant gunner. Helps the gunner and is responsible for ensuring that with a machine gun there is a sufficient number of cartridges and everything that is necessary for firing.

4. Ezdova is in charge of a machine gun wagon (tachanka), transports machine guns, organizes equipment of ribbons with cartridges and their toes to the machine gun.

In the marines, the presence of a rider with a cart is not supposed to be. Well, two podnoschika. Each of which, apart from the rifle and everything else, was supposed to transport the 5 boxes with ribbons. And in the case of injury or death until the moment you reach the land, calm these cartridges to drown.

Yes, the marines might have been “pontorezi”, but the fools obviously did not live there for a long time. And the output was as simple as five kopecks. Once again the good old tape wrapping.

For a podnoschika jump into the water, having in each hand a box with a ribbon - perhaps, but ... m, multiplied by g, has not been canceled, and even in wet and humid conditions. Could a box and break out of hand. Whatever the box is sealed (it wasn’t, it’s clarified), bathing is not good for it. Plus a stray bullet or a fragment, and here you are - 20% BK to the machine gun at the bottom is not known where.

Distributing tapes to other fighters simply increased the chance that these tapes would reach the coast on these same fighters. 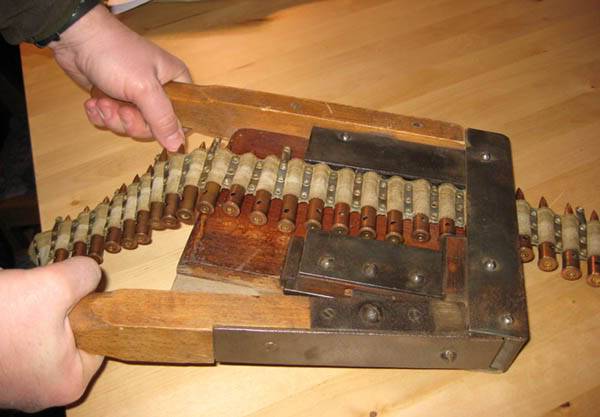 Plus, in the case of wet, dried and warped canvas tape, cartridges could be leveled with the help of such a device anywhere, on any flat surface. 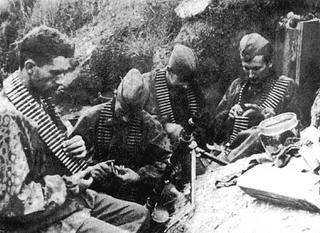 By the way, our opponents also practiced this method.

So it turns out that, on the one hand, "naval chic" and, on the other hand, the maritime tradition is very useful even from the point of view of combat use.

And the Marines for their business can not forgive such a thing, is not it?