Projects of autonomous uninhabited underwater vehicles of the “Harpsichord” family

October 3 2016
5
To solve some problems, various remotely controlled systems with a complex of necessary equipment can be used. So, for the study of the seabed and the study of benthic objects can be used autonomous uninhabited underwater vehicles. Systems of this class are actively developed by domestic enterprises. In recent years, several organizations have created several such complexes. Two of them belong to the family called "Harpsichord."

The first representative of the new family was the device "Harpsichord-1Р". According to the available data, the autonomous uninhabited underwater vehicle “Harpsichord-1Р” was developed by the Institute of Marine Technology Problems of the Far Eastern Branch of the Russian Academy of Sciences (IPMT FEB RAS, Vladivostok). The aim of the project was to create a special tool suitable for performing various tasks at different depths. The development was carried out both in the interests of scientific organizations and for the relevant structures of the military department. The project provided for the possibility of studying the environment and individual objects using a set of onboard equipment. The device received an automated control system with the ability to receive new commands from the control panel. 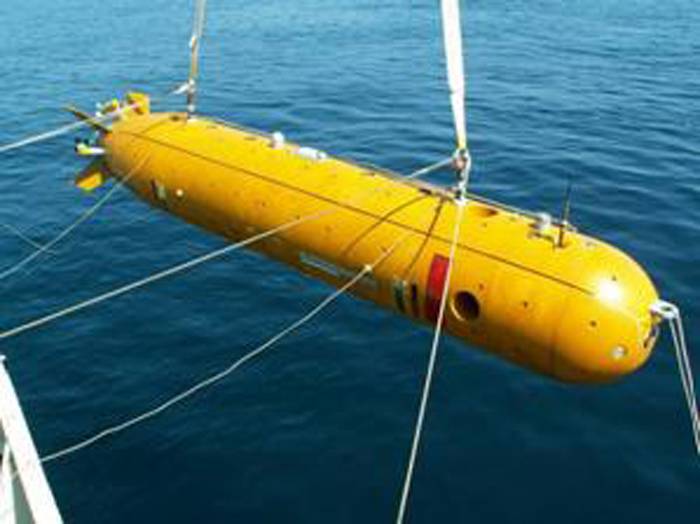 Based on the requirements and expected features of the application, the authors of the project used some of the proven ideas and solutions. In particular, the external appearance of the Clavesin-1Р product resembles a torpedo of slightly increased dimensions. All main units are placed inside the cylindrical body. The head of the apparatus is covered with a hemispherical fairing, in the stern there is a tapering unit, on which is located the so-called. propulsion complex. The length of the “Harpsichord-1P” is 5,8 m, the case diameter is 900 mm. The mass of the device in the air - 2,5 t.

The AUV “Harpsichord-1Р” has a robust housing that ensures the operation of all units at great depths. Design features provide immersion to depths up to 6 km. The device is equipped with four electric motors located on the aft columns of the hull. Each of them rotates its propeller. The available power units allow you to reach speeds up to 1,5 m / s (node ​​2,9). Batteries provide a range of up to 300 km.

The submarine received an automated software control system. In preparation for immersion in the automatics of the product, a program is loaded, according to which the work is carried out. In this case, the possibility of correcting the loaded program is provided. For this purpose, the control complex, located on board the carrier vessel, can use a hydro-acoustic communication channel. After updating the AUV program “Harpsichord-1Р”, it can immediately proceed to the required actions. 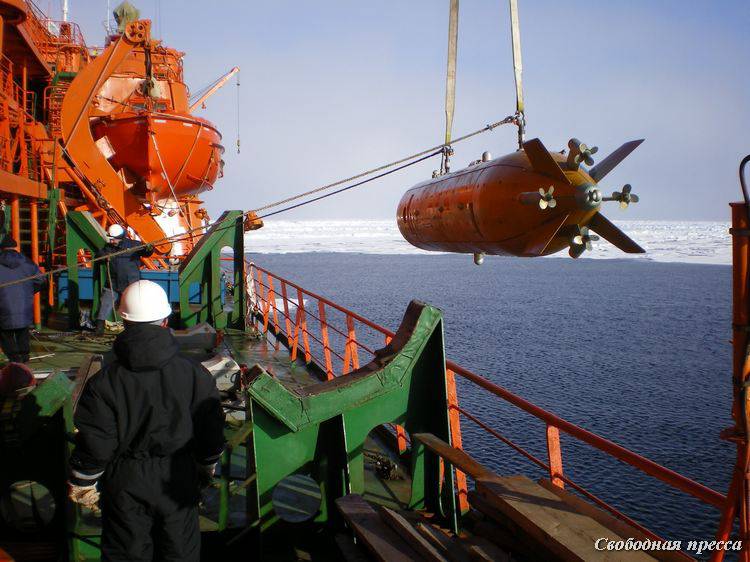 The apparatus is on trial. Photo Svpressa.ru

On board the underwater vehicle there is a set of various equipment designed to survey the surrounding objects and collect the necessary information. Side-scan sonars, an electromagnetic finder, a digital video camera with signal processing tools, an acoustic profilograph, as well as temperature sensors and electrical conductivity of the outboard water are mounted in different parts of the robust housing.

The main means of monitoring the surrounding space, able to work in different conditions and used to detect different objects, is a side-viewing sonar locator. It is possible to use high-frequency and low-frequency operation of the station. Low-frequency mode allows you to review the band width 800 m. When using high-frequency vibrations, the bandwidth is reduced to 200 m.

Other onboard equipment allows you to make various measurements and determine environmental parameters. A bathymetric study of water bodies and their bottoms, acoustic sounding of bottom soil, or video recording of detected objects can also be performed. With the help of on-board equipment, the Harpsichord-1Р can both find and examine various objects located at the bottom. It is possible to study point and extended objects. 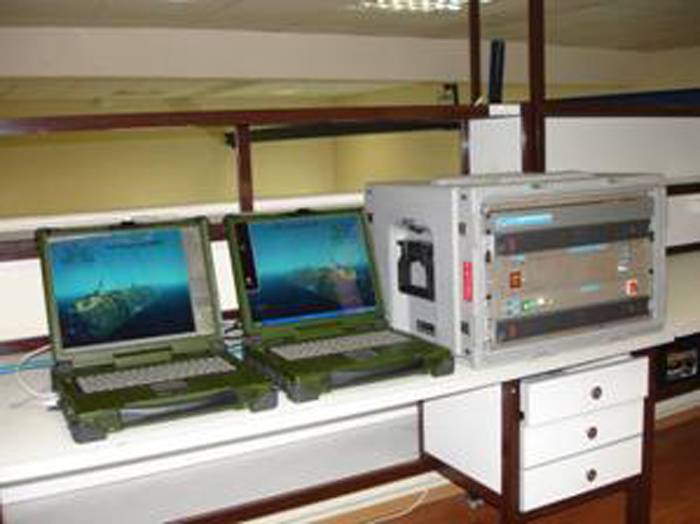 The operation of the underwater vehicle is controlled by a remote control located on board the carrier vessel. The equipment of the console allows you to carry out preliminary training before the dive, including the introduction of a work program, monitor the operation of all systems, receive some data, and also correct a given program and transmit updated instructions to the device.

The AUV project “Harpsichord-1Р” was developed in the middle of the last decade, and was soon brought to the assembly of experimental equipment with its subsequent tests. Later, the prototype was used in various operations, the purpose of which was to conduct research or search for some objects. It is known that during the tests the prototype dived in the Sea of ​​Japan, and also descended into the Kuril-Kamchatka deep-sea trench. Trial operation was carried out in areas of the Arctic. So, in 2007, the device "Harpsichord-1Р" became part of the scientific equipment used by the polar expedition "Arctic-2007". The nuclear icebreaker "Russia" became the carrier of the complex. Later, a new type of AUV was used in a search operation in the Sea of ​​Okhotsk. The purpose of this work was to search for a sunken radioisotope source.

At the end of 2008, the domestic media published some details of research work in the Arctic seas. The video camera of the device allowed operators to see the various inhabitants of the seabed, some of whom could not even be identified by specialists. However, the study of marine fauna was not the task of the operators of the complex.

The image of the object obtained with the help of the equipment "Harpsichord-1Р". Photo IPMT FEB RAS / Imtp.febras.ru

During the tests, the complex "Harpsichord-1Р" confirmed the design characteristics, and in addition, improved some indicators. So, during one of the dives, the depth of 6083 was reached. In 2008, the device passed state tests, the results of which were recommended for full operation. According to various sources, by now an autonomous, uninhabited underwater vehicle has been used several times for various studies in different seas.

Probably, according to the results of tests and operation of the Klavaysin-1R underwater vehicle, a decision was made to create a new system of this class, designed for operation by special naval structures fleet. In 2009, the Ministry of Defense formed the requirements for the new AUV and selected a developer. On May 19, 2009, an agreement was signed between the military department and the Central Design Bureau of Marine Equipment Rubin. To date, the new project has been brought to the test stage at sea.

The second project of an autonomous uninhabited underwater vehicle was called the “Harpsichord-2Р-ПМ”. According to reports, the new development has the same goals and objectives as its predecessor. At the same time, the AUV of the second model should differ with slightly increased dimensions and a different composition of the onboard equipment. Due to this, it is possible to improve the efficiency of exploration and research of the seabed. 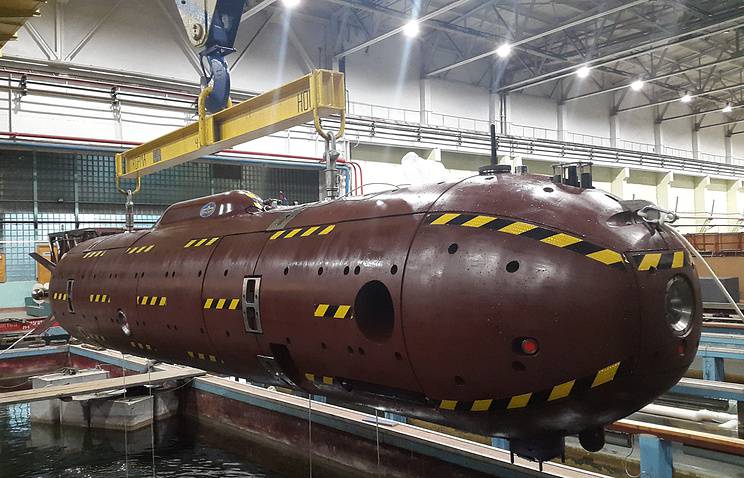 There is some information about the design of the device "Clavesin-2P-PM". According to these data, the main unit of the product is a frame of rectangular cross-section, designed to install all major systems. It is equipped with electronic equipment, power plant, buoyancy blocks, etc. The stern also has a propulsion complex consisting of four engines with screws. Protection against water by using a sturdy housing. The hull has a cylindrical shape with streamlined bow and stern parts. A projection superstructure of a large length and small height is provided on the upper surface of the body.

The length of the AUV “Harpsichord-2Р-ПМ” reaches 6,5 m, the case diameter is 1 m. The mass is approximately equal to 3,7 t. The speed parameters of the device, according to various sources, are approximately equal to the characteristics of the predecessor. In this case, the range was reduced to 50 km. The strength of the hull allows diving to a depth of 6 km. A few months ago it was reported that the device was already able to dive to a depth of 500 m.

The exact composition of the onboard equipment of the new underwater vehicle is unknown. It was probably decided to keep the overall architecture of the previous project, but at the same time to increase the efficiency of work by using the equipment of new models with improved characteristics. Also increased autonomy in comparison with the AUV "Harpsichord-1P". Such data can talk about the preservation of existing management principles, so that the work should be carried out according to a pre-compiled program with the possibility of its adjustment at any time.

To date, an experimental technique of the type "Clavesin-2P-PM" has been put to the test. The beginning of the checks was preceded by the appearance of some documents revealing the details of the project. In particular, in February of this year, the Rubin Central Design Bureau announced a request for proposals on insurance of a new type of experimental equipment. A month after that, it was planned to choose a company that was to insure two experienced submarines. The document also stated that the construction of machinery was carried out in St. Petersburg, and tests are planned in St. Petersburg and in the Crimea, on the Black Sea. The insurance value of one of the AUV “Clavesin-2P-PM” was determined in 300 million rubles.

In early June, 2016, the management of the Central Design Bureau “Rubin” told about the imminent completion of the new project. From the published data, it followed that by now the prototypes have been tested and are being tested in the Black Sea. It was also noted that during this phase of the inspection, the Harpsichord-2Р-PM will be able to reach a depth of about 500 m. Immersion to great depths at the used Black Sea testing ground is simply impossible.

In the foreseeable future, industry and fleet experts will have to complete all the necessary work on the “Harpsichord-2Р-ПМ” project. After this, the experimental equipment, having passed the state tests, can be put into service of the navy. Earlier in the public domain, there was some information about the possible use of new technology. Autonomous uninhabited underwater vehicles will be included in the onboard equipment of nuclear submarines upgraded according to the 949AM project. In addition, they will become a regular means of studying the situation of the BS-64 “Moscow Region” submarine of the 09787 project.

The development of advanced autonomous underwater vehicles allows the fleet and scientific organizations to provide new complexes capable of observing and exploring in various regions of the World Ocean at different depths. It is possible to monitor the situation using sonar locators, as well as some other equipment. When approaching a minimum distance, new devices can use video cameras. An important advantage of new domestic developments is the ability to work autonomously without permanent control from the carrier.

To date, one of the devices of the "Harpsichord" family has passed all the necessary tests and was recommended for full operation. Two prototypes of the AUV “Harpsichord-2P-PM” are currently being tested, which in the future will determine their real future. In the absence of serious problems and at the right pace, tests can be completed within the next few months. Due to this, in the near future, the navy will be able to get new special equipment, simplifying the solution of some special tasks. However, due to the specific purpose of the new technology, the details of its operation will remain secret for a long time.