October 3 2016
1
At the end of September, the long exercises of the Joint Strategic Command “North” were completed. Within two months, various formations and units subordinate to the command solved combat training tasks in the waters of several seas. In addition to ships and naval submarines fleet distant aviation and some other troops. Training activities were completed successfully. The troops and fleet have shown their capabilities.


On the conduct of a number of training activities in the framework of some large and lengthy maneuvers 30 September reported the publication "News". An unnamed military official who took part in the planning of the past exercises said that the purpose of the events was to check the readiness of the formations and units of the North Sea Guard. The capabilities of the command and its units in the defense of the northern borders of the country were tested. Perfected protection tasks from all sorts of threats, from landings to the rocket attacks. In addition, the built infrastructure was checked. 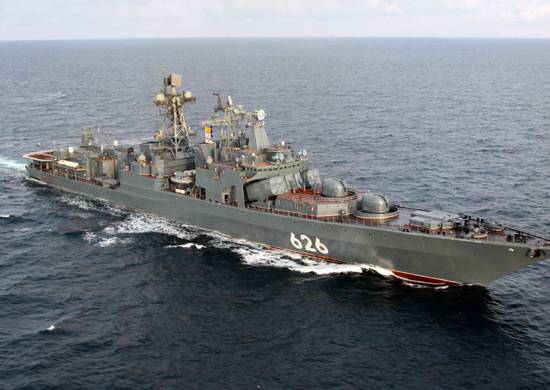 According to the source, the exercises were divided into two stages. During the first, which was a command and staff exercise, the General Staff and the USC "North" worked out their actions without the involvement of military units and formations. Then the units received an order for nomination to the position, after which a new phase of the exercise began. During the second phase of the two-month exercise, shooting, outing, etc. were carried out.

According to Izvestia, the legend of the teachings was as follows. A conditional enemy launched an air and missile strike from the Barents Sea, the North Pole and Chukotka. After this, the ship group of the conditional enemy attempted a breakthrough in the direction of the Northern Sea Route. The purpose of the breakthrough was the landing of assault and reconnaissance and sabotage groups. The troops involved in the exercises were supposed to repel the attack of the conditional enemy, and also to cause him the greatest possible damage. To counter the attack should use all available means and systems.

The second stage of the exercise implied retaliation against the conventional enemy. To accomplish this task, naval strike ships and long-range aviation were involved. Finally, in the last days of September, an intercontinental ballistic missile was launched from one of the newest submarines of the Russian Navy.

Major exercises of the Northern Fleet and other unions, managed by the USC "North", started on July 23. As reported by the press service of the Northern Fleet, more than 100 warships and boats, submarines and auxiliary ships sailed into the sea on that day. Also, land and coastal troops were alarmed. In total, over 1000 units of military equipment were involved in the maneuvers. Three dozen airplanes and helicopters took part in the combat readiness test from the 45 Army of the Air Force and Air Defense. The anti-aircraft missile divisions of the Kola air defense unit dispersed in the specified areas.

On July 27, the Northern Fleet announced the completion of another training event. For several days, the crews of the two submarines worked out the search and attack of the submarine of the conditional enemy, and also trained to overcome anti-submarine systems. The task of one of the submarines participating in this exercise was a secretive way out to a given area, overcoming the existing anti-submarine systems. The second, in turn, was to find a conditional enemy and attack him. 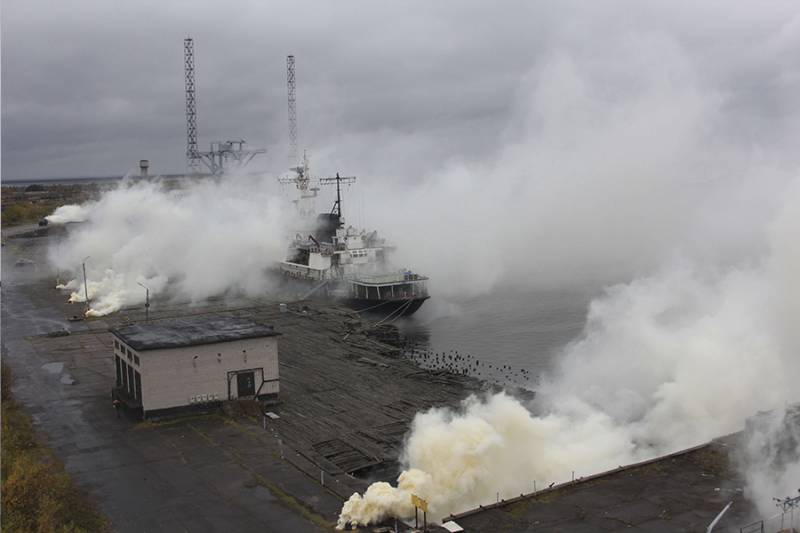 Setting smoke screens on the basis of Severomorsk

10 August began new training in the fight against enemy submarines. On this day, large anti-submarine ships "Vice-Admiral Kulakov" and "Severomorsk", the destroyer "Admiral Ushakov", as well as small anti-submarine ships "Jung" and "Brest" entered the Barents Sea. The task of the ship group under the control of the Deputy Commander of the Northern Fleet, Vice-Admiral Viktor Sokolov, was to search for submarines of a conditional enemy. The ships were supposed to solve similar problems both independently and when interacting with anti-submarine aircraft. Training lasted several days.

On August 13, a training session was held at the main base of the Northern Fleet in Severomorsk, the purpose of which was to test the masking of ships at the pier. The RCBZ company used aerosol masking tools, with which it created a large smoke screen in the shortest time possible. The installation of the veil made it possible to close several warships from observation, including the flagship of the Northern Fleet, the heavy nuclear missile cruiser Peter the Great.

On August 30, a shipboard group consisting of the BOD Vice Admiral Kulakov, the Pamir rescue tug, the KIL-164 propulsion vessel and the Akimovik Kovalev sea transport of arms left the city of Severomorsk. During the time when the ships left the naval base, the main group of the Kola flotilla of heterogeneous forces conducted mine-support exercises. Having entered the Barents Sea, the group of ships headed for the eastern regions of the Arctic. During the trip, the ships were to pass through several seas, as well as conduct a series of combat training exercises. Due to the difficult conditions of the Arctic, it was planned to organize a permanent monitoring of the ice situation using military aircraft. At certain points along the route, new combat units and auxiliary ships were to join the ship group. In particular, certain sections of the route were supposed to be overcome with the help of atomic icebreakers.

As reported by the press service of the Northern Fleet, already on September 2, the ship group arrived in the waters of the Kara Sea, from where it was supposed to go to the Novosibirsk Islands. 10 September ships arrived at their destination and anchored in the Gulf of Stakhanovtsev Arctic. 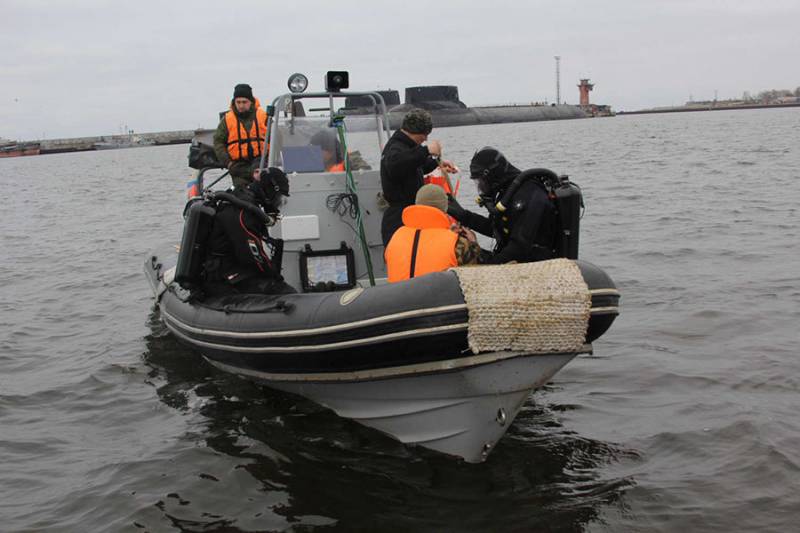 The next large-scale stage of long-term exercises started on September 20. The maneuvers of disparate forces involved ships and ships of the Northern Fleet, submarine forces, aircraft of the Air Force and Air Defense Forces, coastal forces and logistical support forces. 12 ships, around 10 support ships and an unnamed number of submarines took part in the exercise. The first stage of the new exercises was the deployment of forces: the ships left their bases, the ground units reached the assigned positions, and the aircraft spread over the airfields.

On September 23, the naval group of the Northern Fleet fulfilled the combat training task of destroying the airborne troop of a conditional enemy. In accordance with the scenario of the exercise, a group of enemy fighters attempted to land on the Rybachiy peninsula. Anti-submarine aircraft IL-38 found the enemy and passed data on the targets of warships. Then the cruiser “Peter the Great” and the destroyer “Admiral Ushakov” attacked the enemy’s location using AK-130 artillery mounts. A feature of this workout was the transfer of fire from a surface target to a coastal one located beyond the direct line of sight. The successful solution of the task was due to the correct interaction of ships and aviation.

September 24 at the White Sea Naval Base (Severodvinsk) was trained training tasks on anti-sabotage defense. The fighters of the squad to combat underwater sabotage forces and means were to ensure the security of the base. When an enemy was detected, it was necessary to take appropriate measures and exclude its entry into the internal raid. Using modern means of observation and detection, military personnel of the base successfully identified a conditional enemy, which was played by the combat swimmers of one of the units of the Northern Fleet. Training sessions were also conducted with the use of various special weapons.

September 25 held shooting with the use of cruise missiles "Granit". The heavy nuclear missile cruiser "Peter the Great" and one of the submarines of the 949A project "Antey" were ordered to strike at the ships of the conditional enemy. A complex target position near the Novaya Zemlya archipelago was used as target ships. The missiles launched by the cruiser and the submarine (from a submerged position) successfully hit these targets.

September 27 strategic missile submarine "Yuri Dolgoruky" (project 955 "Borey"), while in the waters of the White Sea, performed salvo firing missiles P-30 "Bulava". One of the missiles successfully completed the flight program and hit the training target at Kamchatka test site Kura. The second did not reach the goal, because during the flight the self-killer worked. The reasons for this have not yet been named. 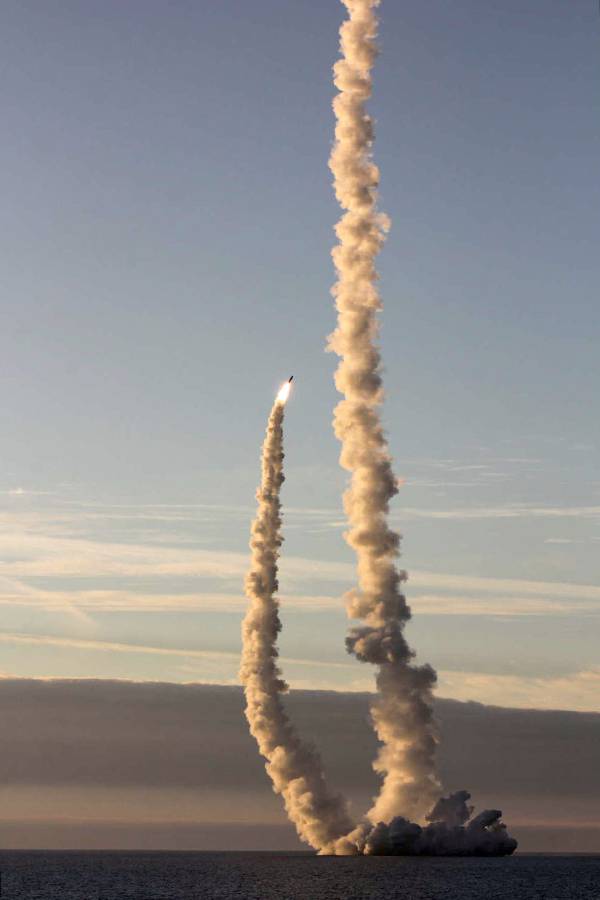 The shooting of 27 September was the last stage of the exercises of the Northern Fleet and other structures responsible for the protection of the Arctic. Soon the ships and ships returned to their bases, and the coastal troops left their occupied positions to their places of permanent deployment. The command began the analysis of the past exercises, the results of which will be used to make certain decisions concerning the further development of the North Sea Corps and its members.

The Russian Ministry of Defense regularly reports on the conduct of various training events. The teachings of the Northern Fleet and the USC "North" as a whole were no exception, and constantly became the subject of new communications. However, the fact that the maneuvers of the last two months were part of one large-scale program became known only recently. About this at the end of September, i.e. after completing all the exercises, the Izvestia newspaper reported. Thus, from June to September of this year, some of the largest exercises of the Navy of recent years were held.

During long training events, divided into several main stages, surface ships, submarines, support ships, coastal troops, naval aviation and other branches of the military responsible for protecting the northern borders of the country showed their potential and capabilities. The successful completion of the exercise, among other things, speaks of the real capabilities of the North Joint Strategic Command, created at the end of 2014. As the experience of the last teachings shows, the creation of a new control center, which assumed the command of a large group of disparate forces, justified itself. The northern borders of the state are under reliable protection.

Ctrl Enter
Noticed a mistake Highlight text and press. Ctrl + Enter
We are
Sudden verification of the combat readiness of the Northern Fleet, ZVO and Airborne Troops“Indra-2012” - to be teachings!
1 comment
Information
Dear reader, to leave comments on the publication, you must to register.