28 2016 June
30
Blog chervonec_001 published another summary of the situation in the Donetsk Republic over the past week. 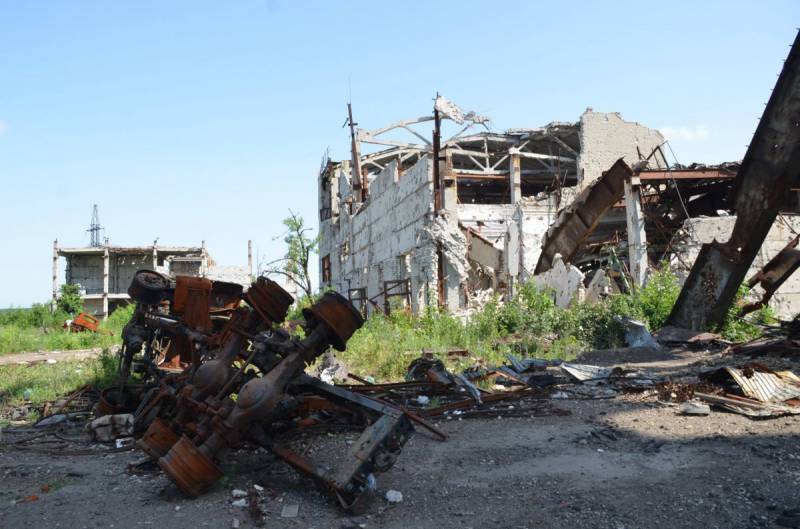 «22 June, Wednesday.
According to the intelligence data of the Armed Forces of the DPR, voiced by Basurin, there was a shootout between 36 units of a separate brigade of the marine corps and the Azov battalion, as a result of which losses from both sides amounted to about a dozen wounded and four dead. The next day, the command of the Armed Forces of Ukraine decided to withdraw the battalion "Azov" from the 36 Brigade of the Marine Corps.

Late in the evening, around twenty cars with civilians were started and stopped at a neutral point in the Mayorsk checkpoint. They were stopped for the night on the transition line, which is advanced into the depths of our territory on 1 km, with the prohibition of departure in the opposite direction. After that, they opened fire on our checkpoint in the hope that we would return fire. The fire was conducted from the BMP and small weapons. The provocation failed, the militia knew about civilians and did not begin to return fire.

It was relatively quiet during the day. With 21: The 00 rang the Donetsk front in the north of Donetsk near the Airport-Spartak-YPG. Everything is as usual: small, mines 82-mm, then 120-mm, BMP and after an hour 122-mm howitzers were connected. In the south under Kominternovo and Sakhanka, the same situation.

21: 40 West and North of Gorlovka under fire. 22: 30 The cable line 6000 kW was damaged at the Shvernik substation, several districts of Donetsk — Kuibyshevsky, Kiev, Kirovsky — were de-energized, and repairmen, despite ongoing shelling, are carrying out restoration work.

22: 48 Came to news from the LC, from several directions the APU fired at the LC position near Pervomaisk. Rifle, mortars, periodically creeps technique, under the cover of art. Try to check the position of the brigade "Ghost."

23: 00 battles and shelling continue along the line north of Donetsk and to Gorlovka. With 23: 15 connected heavy art, every 2 seconds the arrival of 152-mm projectile. In 00: 00, everything stopped. Over the past day, the APU fired at us 521 times.

23 June, Thursday.
On the bridge between Lisichansk and Severodonetsk a military tractor that was carrying a tank, lost control and crashed into a checkpoint, the driver died.

As you have become accustomed to, and we in two years and even more so, the battles and shelling began in the evening.
18: 30 without swinging, the APU immediately began to beat on YAPG 120-mm mines.
18: 30 southbound arrivals 120-mm min in the vicinity of Comintern and Sartana.
21: 00 attacks on the northern suburbs of Donetsk and Gorlovka continue.
21: 30 Noise Dzerzhinsk direction - Noises, w. South, Zaitsevo.
21: 30 from the point of view of the Armed Forces of Ukraine in the village of Marinka shoot from a rifle.
21: 30 arrives in Kiev.
21: 30 arrives in Kuibyshev.

21:45 fights have been going on for 3 hours 15 minutes from Novoazovsk to Gorlovka. All types of weapons and equipment are used, except for MLRS and aviation. In Donetsk, light blinks in five districts; there are interruptions in water.
From 21: 50 to 22: 05 response, total 15 minutes.

22: 10 APU north of Donetsk immediately subsided. Gorlovka fights and shelling continue. Under the cover of the arts, the Ukrainian Armed Forces are trying to send small groups of infantry to us, about 3-8 people.

22: 30 north of Donetsk is again under heavy artillery fire.

22:40 on the southern front from the Sartan region, Talakovka APU is fired from 120 mm mortars, 122 mm howitzers. Periodically roll out two tankwho make a couple of shots and hide in a ravine.

23: The 10 strong cannonade in the north of Donetsk continues. Every second a 122-mm or 152-mm projectile arrives. I lost count, and in the morning it will be credited as one shelling. Arrivals in Kuibyshev and Kiev districts.

23: 15 VSN began to give an answer, apparently already strongly APU got. APU continues to fire, people see bright flashes all over the front.

Exploration Gorlovka: recorded movement of the APU to the north of the city. About a dozen different armored vehicles are moving to the front. Fights with a new force broke out around Zaitsevo, used small, LNG, RPG, AGS, VOGi. In the course went technology. APU are firing from two BMP-2.

23: 30 The situation across the front line is tense, especially the north of Donetsk. Fierce battles and art duels last about half an hour. Rather, do not duel. The APU fires residential areas in staggered order, and the BCH at the APU batteries ...

Half of Donetsk was left without electricity. 23: Our 55 began to respond more often, working on batteries that are located north of Sands, Water and Experienced. From the northern outskirts can be seen on the horizon explosions and fires. According to the YAPG (Yasinovatsky traffic police post), incomplete “Gradov” packages are flying, roughly on the 10 RS.

24 June, Friday.
0: 18 battles continue across the front, the APU began to cover 120-mm mines Staromikhaylovka. Work with the center Krasnogorovka.

Civilians, about 40 machines, remaining for the night between the VSN checkpoint and the APU, in the Yelenovka area, counted 28 flying shells from the positions of the APU in the direction of Yelenovka and Dokuchaevsk.
1: 05 after a short break - new shelling, which lasted until 2: 05. Have reported on hit in hospital. Then everything fell abruptly around the front.

In the morning at 10: 50 there was an explosion on the territory of the Republican Trauma Center in Donetsk. Low-power explosive device worked. The goal was the commander of the intelligence unit "Motorola". According to reports, there are no injuries.

Late in the evening in 21: 50 district Zaitsevo, traditional for this place and time of the fighting. Mines are flying, the SVD slams, the Kalashnikov pops, the memory sneezes ...

22: 00 in the south of the republic of the Armed Forces of Ukraine are firing from 120-mm mortars.

22: 40 began the nightly shelling in the north of Donetsk via the Volvo-Airport-Spartak-YPG line. Periodic arrivals 120-mm and 122-mm.

25 June, Saturday.
The command of the APU does not stop trying to capture the "gray areas". Another such attempt was made on June 25 near Avdiivka, it began at dawn, after 4 hours of the morning. First, from the Ukrainian positions was opened fire from small, grenade launchers and mortars. Then ours, on the front line, noticed two groups of the Armed Forces of Ukraine, moving in dashes. In each group there were three people. Soon they were on the territory of the "gray zone" and opened fire with small arms.

During the day, Dokuchaevsk worked with 120-mm mortars, damaged 2 at home. Until the evening it was quiet.
In 20: 20 in the southern direction, the Ukrainian Armed Forces began firing from the vicinity of Shyrokyne, Sartans with 120-mm mines.

22: 30 UAV APU is driven over the Proletarsky district of Donetsk, several chargers are working at once, and a short explosion thundered a bit later in the sky. The light flashes in Gorlovka.

23: 20 heavy fighting with the use of technology and art continues in the west and north of Gorlovka. In total, over the past day, the APU 561 once fired at the territory of the DNR.

26 June, Sunday.
At half past night, the fighting resumed in Zaitsevo.

During the day, two children of pre-school age, 2009 and 2010, were born. At night, the APU bombarded the Comintern and damaged the high-voltage line. Electricity could be turned off only on the side of controlled Ukraine. The children played and hooked the wire lying on the ground in the tall grass.

Until the evening, as usual, we slept.

In 17: 00 watch in the park Shcherbakov began a concert. Kobzon and other artists came to us. A competition was held among youth teams.

The work of foreign snipers, mostly on the southern front and near Gorlovka, has become more frequent.

21: 50 festive salute from 10 volleys, residents celebrated the Day of Youth and the contest winners in the park.

In total, for the period from 20: 00 to 03: 00, 196 mines and about 42 shells of various calibers were fired from the positions of the Armed Forces of Ukraine in towns and cities of the republic !!! Over the past day the APU 380 once fired on the territory of the DNI.

17: 40 south direction Kominternovo and Sakhanka. Punishers began the evening concert, there is a mortar and howitzer shelling of our positions. From 19: 30 to 19: Our 40 gave a short response, the concert is over.

It should be noted that the APU began to use more tanks, UAVs and snipers. In the villages controlled by the Armed Forces of Ukraine, mercenaries of the group of 70-80 people were noticed. In the Gorlovka direction, mercenaries arrived in the number of 150 people. About the same age, the same uniform and weapons. They are not at all interested in the positions of the Armed Forces of Ukraine and defense lines. Also do not show interest in the village or the city where they are located. Apparently this is the group for the offensive, not for defense. So to say, strengthening the deplorable state of the APU brigades.