28 2016 June
56
On the eve of the American and Qatari press appeared interesting information. The journalists of the American newspaper The New York Times and the Qatari television channel Al Jazeera conducted a joint investigation, during which they allegedly managed to clarify the involvement of the Jordanian special services in the implementation of the American weapons on the black market. AT NYT it is reported that we are talking about weapons that the United States and Saudi Arabia supplied the so-called "moderate rebels" for armament.


The material of the American and Qatari media states that the Jordanian special services under the guise of transporting weapons to groups identified in American and Saudi documents allegedly simply sold it to international arms dealers, and they in turn resold it at their own discretion. It is reported, for example, that weapons “for moderate rebels” “surfaced” in Jordan’s capital, Amman, at a time when an armed group attacked a training base in which American soldiers were stationed. It happened last year. Two American soldiers died.

Jordanian Minister of Information Mohammed al-Momani denied all the allegations. At the same time, the mentioned media refer to sources in Saudi special services and the CIA and report that representatives of the special services of Jordan for a long time from the sale of weapons in the black market rescued huge amounts of money, while the “moderate opposition” in Syria did not receive weapons.

Now it is becoming known that representatives of the so-called Syrian moderate opposition received about a hundred missiles of the "air-to-air" type along the "partner line". Given the fact that ISIS does not have aviationthen there is further evidence that the armament of the "moderate rebel" units is directed primarily against Syrian aviation and, which cannot be ruled out, against the Russian Aerospace Forces. 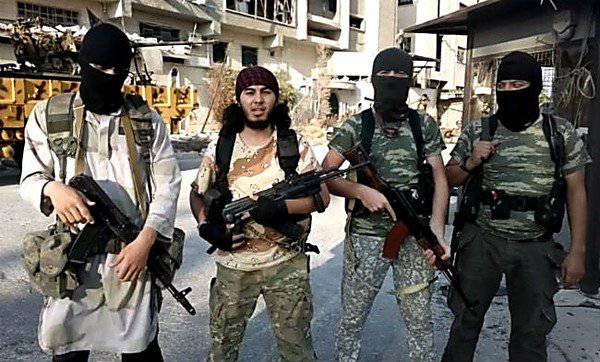 From the materials of the TV channel Al-Mayadin it is also known that part of the missile weapons were in the hands of terrorists of the Dzhebhat al-Nusra group. This is primarily about the troops, concentrated in the province of Aleppo. In the area of ​​the Syrian-Turkish border, according to the Ministry of Defense of the Russian Federation, “Dzhebhat al-Nusra” concentrates heavy equipment, preparing an offensive on the positions of the SAR government forces.