The attack on Rakka and the message of Moscow

8 2016 June
83
With the support of the Russian aviation the Syrian army recently crossed the border of the province of Raqqa. Recall that the provincial capital, the city of Raqqa, is considered the "capital" of the jihadist Islamic State. Experts believe that Rakku may possibly be freed from militants in the coming months. 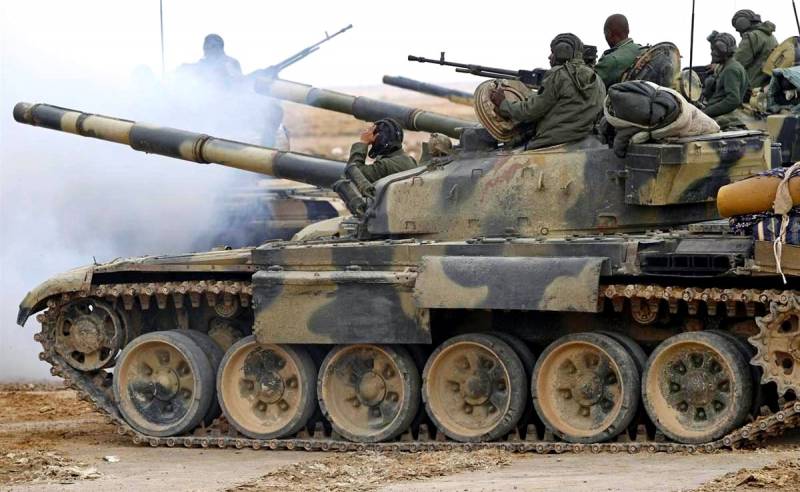 The reports from the Syrian front are briefly as follows.

Last Saturday, the Syrian army crossed the border of the province of Rakka. As foreign and Russian media reported, the Assad offensive was supported by Russian aviation, which caused serious damage to terrorists near the provincial border in the eastern districts of Hama province. After the attacks, on Friday, the Assad army reached the borders of Raqqah, and on Saturday already crossed the province's border. The Syrian Council for the Supervision of Human Rights reported the start of the fighting in Rakke.

The city of Rakka is the actual capital of the Islamic State militants. Therefore, success here could be regarded as a decisive, crucial battle throughout the Syrian war. It would be the biggest victory over the terrorists who proclaimed the “caliphate”.

Apart from the Assad army, the Kurdish units (“Syrian Democratic Forces”) are attacking the Raqqa together with the Arab “opposition groups”. Recall that these forces are supported by the United States.

The Syrian Democratic Forces are now conducting an operation to capture the towns of Tabka, Manbij and Raqqa. One of the key targets on the way is Manbij, because this city, located between the provincial capital and the Syrian-Turkish border, is likely to be supplied weapons to rakku.

Residents of Manbij told the channel "RT" about the orders that are established in the city of Islamists. The “Syrian Democratic Forces” managed to save thousands of refugees from the vicinity of Manbij and Mascana. Now they have taken refuge in the village of Tal-Arsh and can share memories with journalists.

“We were liberated by the Syrian Democratic Forces. I hope the Islamists will no longer torment us. They did not let us out of the city, they killed people. They did not allow us to smoke and forced us to grow beards, ”says one refugee.

“Civilians suffer from Islamist atrocities.” See for yourself what's going on here! All this because of the "Islamic State", which in fact has nothing to do with Islam. Take a look how people are exhausted. They have no water, they have lost their homes. Terrorists are to blame for our troubles. We will free the entire territory of Syria from them, ”said the fighter from the military committee of Manbij.

As for the serious threat to the "IG", it is still not represented by the "Democratic Forces" but by the Assad army and the actions of Russia. According to the Al-Mayadin television channel based in Lebanon, to which the newspaper refers Kommersant, Assad forces have already captured a transport hub in the village of Zakia and are developing an offensive against Tabku (there is a military airfield and a dam on the Euphrates near this city). If the army captures Tabku, the direct road to Raqqu (40 km) will be opened further. Now the army units of the Desert Eagles are moving in the forefront of the advancing forces.

Neither in Damascus, nor in Moscow, nor in Washington, the newspaper notes, they do not officially confirm that the anti-terrorist coalitions (Russian-Syrian and American) are coordinating their actions in Rakka. However, military experts believe this option is likely. According to military sources of Kommersant, the aerospace forces of the Russian Federation are giving Syrian troops serious support: after all, it was the actions of the Russian aviation that allowed the government forces to advance and actually opened the way to Tabka.

“The selection of targets is made on the basis of data from space and human intelligence, and the actions of the Syrian army are coordinated with our military advisers,” an unnamed source told the newspaper. - We made contact with the American-led coalition, but we cannot talk about joint planning of operations. We proposed this, but the United States does not want to fully cooperate with us. ”

It is possible that Rakku will be able to take in the coming months, said BFM.ru Vladimir Isaev, a professor at the Institute of Asian and African Studies of Moscow State University.

“The Syrian army and Kurds hit the Raqqah area and took several commanding heights, thus ensuring, of course, the approaches of the Syrian regular army. And, naturally, we have provided great support, our VKS after a sufficiently long break struck several serious blows to the Islamists' positions, the expert noted. “If the Kurds and the army of Damascus coordinate their efforts with each other and with us, Raqqah can be taken before the end of the summer.” Moreover, according to Lavrov, we finally achieved coordination with the United States. So that our air forces, God forbid, do not collide somewhere in the air. And now they are defining areas that we could bomb with sufficient success, without irritating our, as they say, western partners about who we regard as moderate and moderate opposition. ”

On the Al-Jazeera Interesting comments appeared about the “messages” sent by Russia to the world community.

In recent days, correspondent Zeina Khodr (Zeina Khodr) counted as many as three messages to the Americans concerning the situation in Syria.

First, the Al-Nusra Front, linked to Al-Qaida, is accused of trying to endanger a truce. This terrorist group today is active in Aleppo and Idlib, which is the main obstacle to the further cessation of hostilities, the TV channel reports the Russian Defense Ministry.

Secondly, the United States is accused by the Russians of not being able to separate the “moderate opposition groups” that the Americans control from the terrorists. And if so, the further postponement by the “American partners” of the corresponding efforts not only discredits the so-called moderate opposition, but also leads to the collapse of the peace process.

And thirdly, the Turkish border is still used to smuggle weapons to terrorists in Syria. The Russian defense ministry insists that the number of heavy trucks moving from the Turkish-Syrian border has "increased significantly."

Such “messages” came from Moscow in response to Washington’s refusal to accept the Kremlin’s offer to cooperate in the fight against terrorism in Syria. The Russian authorities "do not hide their displeasure," the journalist said. She believes that the Russians are most likely to “pave the way” for a large-scale offensive against the Al-Nusra Front. It is not for nothing that pro-Kremlin media in Russia write about “deeper understanding and closer cooperation” between the governments of Russia, Syria and Iran. In addition, the air force of the Russian Federation "clearly increased its participation" in the Syrian war. However, the “battle has just begun,” said an Arab journalist.

And already there are assumptions about building up the military forces of Russia in Syria.

“Against this background, conversations in the expert community and the media that the Russian military presence in Syria may be increased,” said A. Mardasov on the website. "Free Press". - Firstly, the mixed grouping at Hmeimim airbase can be replenished with a certain number of front bombers Su-24M and Su-34. Secondly, additional special forces detachments may be deployed to the SAR, as well as the formation of volunteers or, as they are called, "pilgrims."

“The Americans and the Kurds apparently overestimated their strength, so they had to change direction and now claim that the attack on Manbidge turned out to be more important,” Alexander Khramchikhin, deputy director of the Institute for Political and Military Analysis, said in an interview with SP. - As for the government army, it is clear that she does not have enough strength to storm Rakka. And in this sense, building up Russian military assistance in Syria would look logical. If we already started to participate in this war, then it needs to be finished more or less successfully. True, in our time it is difficult to say what the criteria for success are, since now the wars are postmodern. Many believe that it is more important to declare yourself a winner than to win in reality. However, in addition to the media image, there is also a certain reality that must be followed, and it dictates the buildup of Russian aid "on the ground." I repeat, if we were involved in a war, then it must be completed successfully, otherwise it will be difficult to imagine such a thing, despite all the efforts of propagandists. ”

Firstly, in the struggle of the Syrian forces against the “Islamic State”, a probable turning point is brewing.

Secondly, active support by the Russian Assad army is obvious. And it may well be that this support will be increased in the near future.

Thirdly, for the first time in one way or another, the two antiterrorist coalitions (the American and the Russian-Syrian coalition) are coordinating efforts to counter the IG militants in Rakka. If two coalitions achieve the same goal, then it is absolutely clear that without coordination its achievement will be impossible.

Fourthly, a probable summer victory over terrorists in the province of Raqqah and the capture of the city of the same name would mark the beginning of the end of the self-styled “caliphate”.

We wish the Syrian army victory in Rakka and the complete defeat of the outraged caliphates!