all hands on deck

March 31 2016
25
Orbital grouping should be the basis of the intelligence system of the Russian Navy.


Incomplete and inaccurate information about the enemy, especially its absence or obtaining false data about the situation has always led to a defeat side, even significantly superior in quantity and quality of weapons and military equipment, the number of personnel. This is particularly pronounced in the confrontation at sea.

Meanwhile, analysis shows that our fleet does not have the forces and means of reconnaissance, even at the minimum acceptable level. The existing system is capable of monitoring only in the areas adjacent to our coast and in some relatively small, quickly operational areas of a distant sea zone. One of the main drawbacks of the disposable forces and means is their low combat stability, which calls into question any possibility of conducting reconnaissance in the far sea and ocean zones with the start of hostilities.

In these conditions, in fact, the only type of naval intelligence that can provide a solution to the whole range of emerging tasks, especially in areas remote from our shores and in the conditions of active opposition of the enemy, remains space exploration. As part of the Soviet Navy was a fairly effective system. It had passive (radio) and active (radar reconnaissance) satellites. This system provided surveillance of surface ships of other states on a global scale. Accuracy of positioning and resolution of satellites, as well as the possibility of transmitting reconnaissance data directly to warships, allowed the system to be used for issuing target designation to strike ships and submarines. A sufficient number of satellites in orbit minimized data obsolescence to a level acceptable for organization of combat. But by now our fleet has lost this system, and a new one is just being created. Its characteristics are not disclosed. However, from an analysis of the requirements for such a system arising from the tasks imposed on the forces of the Russian Navy, it is possible to form an idea of ​​its likely appearance.

What is needed at the exit?

The cosmic component can and probably should become the main one. First of all, it is necessary to highlight such a property as globality. Today, only space intelligence is capable of observing the waters and territories of the entire globe. Another of its most important advantages is the high accuracy and reliability of intelligence, based on the vastness of the information obtained. Space exploration fleet capable of providing continuous monitoring of designated objects. It should be noted that this concept does not imply maintaining constant contact with the object. Surveillance is considered continuous if the data are received at intervals not exceeding the obsolescence time. It varies greatly for tasks of operational and tactical scale, the type of object and its mobility. A space reconnaissance system is potentially capable of providing data acquisition about targets with a frequency shorter than the aging time and therefore meets the requirement of continuity - the whole question is in building a constellation of spacecraft (SC). Also, the most important advantage of the system is its extremely high combat stability, at least today, when there are no effective anti-satellite assets in the armed forces of foreign states, at least in large quantities.

Look under the water

One of the most important tasks of the Russian Navy is to identify combat patrol areas, detect and track nuclear missile submarines with ballistic missiles (SSBNs) of foreign states, primarily American ones. Accordingly, the most important operational requirement for the space reconnaissance system of our fleet is the identification of the combat maneuvering areas of these submarines, as well as the infrastructure for operational support of their activities in these areas. That is of paramount importance is the ability to detect the operation of communication systems of SSBNs, especially space, to intercept ultrafast transmissions, the operation of the radar, in the future - to identify other demasking signs, determining the location of the radiation source with an accuracy sufficient for targeting maneuverable anti-submarine forces. First of all, we are talking about areas of probable combat patrols of foreign SSBNs - off the coast of the United States in the Pacific and Atlantic oceans, in the northern part of the Norwegian Sea, in the Greenland and Mediterranean seas, and possibly in the territorial waters of China.

Another important task of our fleet is to identify areas of combat use of multipurpose submarines (PLA, submarines) of other states. This is necessary to ensure the combat stability of our SSBNs, as well as submarines of other classes and formations of surface ships.

The system should be capable of conducting reconnaissance of enemy submarines and submarines in the areas of their potential combat operations near, distant sea and ocean zones to a depth of 600 kilometers from our coast, from where they can strike Russian coastal targets and counteract the forces of our fleet. In addition, it is necessary to monitor foreign submarines and submarines on their deployment routes in areas of combat missions or patrols.

The fight against the formations of the surface forces of a potential enemy is also an important task of the Russian Navy. In peacetime, our fleet should monitor aircraft carrier and other naval strike groups, monitor them in areas of their combat maneuvering and on deployment routes. With the onset of hostilities, the most important task of our fleet is the destruction of the shock groups of surface ships of the enemy before they reach the line of mission.

And in peacetime, the Navy’s space reconnaissance system is required to identify the connections of foreign ships at least to the line of operational deployment of our forces and to monitor them with an accuracy that ensures the continuous retention of a foreign connection in the shooting area of ​​our assault ships. In a special period, the space reconnaissance of the Navy must, in addition, ensure the withdrawal of our attack forces to the combat area and issue target designation to the missile armsprovide shock guidance aviation.

In addition to these basic and most complex operational tasks, the space reconnaissance system of our fleet must be capable of monitoring the coastal infrastructure of foreign naval forces, primarily likely adversaries, in peacetime and in wartime, revealing maritime communications areas and their operational equipment with accuracy that allows the beginning of hostilities inflict effective blows on them. At the same time, with respect to stationary objects, the main requirement is the ability to track their functional structure with an accuracy that ensures the possibility of selecting the most vulnerable elements for guaranteed decommissioning. 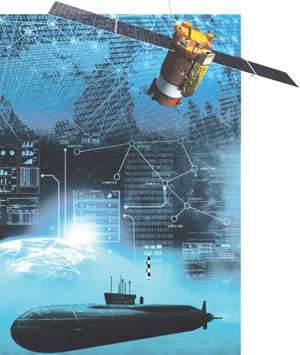 The subsystem of space reconnaissance of ground objects of the naval forces of foreign countries includes spacecraft designed for photo, optoelectronic, radio and electronic reconnaissance (RR and RTR). The resolution in the optical range should be no more than a few centimeters, which will allow for the classification of objects, to reveal their design and configuration. The space subsystem of the RR and RTR of ground-based objects should provide the ability to intercept radiation of different RES in ranges from meter to centimeter with determining the place of the emitter with an accuracy sufficient to use TFR ("Caliber", X-101 and others), that is, a few meters. The frequency of viewing ground objects can range from several hours to several days. The viewing area should cover the entire coastal area of ​​North and South America, Europe, Asia and Australia. Accordingly, this subsystem can be built using high-altitude (for conducting the RR and RTR, in particular, in stationary and quasi-stationary orbits) and low-altitude satellites (photo- and optoelectronic intelligence). Time to bring the data to the fleet PU may be several hours.

Obviously, the basis of the subsystem of the submarine space reconnaissance should be the PP and RTR satellites capable of conducting reconnaissance over the entire range of the operation of foreign submarines in the boundaries between 80 and 85 degrees of northern and southern latitudes. Requirements to positioning accuracy are less stringent than to ground targets: within two to four nautical miles, but significantly higher in terms of communicating information, which should be a maximum of 10 – 20 minutes, directly to the tactical forces of anti-submarine forces. Accordingly, the basis of this subsystem consists of high-altitude satellites, possibly located in stationary or quasi-stationary orbits. Their number should make it possible to cover the entire globe with observation in the equatorial plane. However, exploration at high latitudes will require satellites in polar circuits. The viewing bar of the latter should be such as to ensure continuous or with an acceptable frequency of observation of the water area of ​​operational areas.

Specificity of surface ship reconnaissance determines that the corresponding space subsystem should include satellites of active radar, radio and radio reconnaissance, capable of operating in the entire range of radiations of radio electronic systems of foreign surface ships. The latitudinal range of their observations can be limited to 80 degrees in both hemispheres. Target positioning according to PP and PTP data can be within 10 – 20 miles. More accurate target coordinates are established by radar reconnaissance satellites. The viewing strip should be such as to provide, at an acceptable frequency, observation of the water area of ​​operational areas. At the same time, in addition to the transfer of intelligence data to coastal launchers, the possibility of transmitting this data to the fleet command posts, to separate attack submarines and surface ships is always provided for. This will allow the use of the space system for the direct issuance of targeting to the use of rocket weapons. For the RR and RTR surface forces of foreign states can be used as high-altitude satellites located in stationary or quasi-stationary orbits, and low-altitude on polar elliptical ones. Radar reconnaissance satellites, using, as a rule, side-looking radar, according to the experience of the USSR and the USA (Lacrosse), must be in low polar elliptical orbits.

From the review, it follows that the space level of the space intelligence system of the Navy may include the following main components:

1. Grouping high-altitude satellites PP and RTR, located in stationary or quasi-stationary orbits, providing reconnaissance RES foreign surface ships, submarines and ground objects in the range of latitudes up to 70 degrees in both hemispheres.

2. A grouping of PP and RTR satellites located in low polar elliptical orbits, intended for reconnaissance of RES mainly foreign surface ships and ground objects in the range of latitudes up to 85 degrees in both hemispheres.

3. The grouping of satellites of radar reconnaissance to detect surface ships and their connections in the waters of the O (M) TVD and ensure the issuance of target designation of anti-ship missile weapons with satellites of this group in low polar elliptical orbits.

4. A grouping of photo and optoelectronic satellites for tracking ground objects, as well as surface ships and submarines located in the bases. Satellites of this grouping can be located in medium and low orbits.

Of course, such a system does not replace or cancel other types of intelligence of the Navy. However, given the critical situation in this area, it is space intelligence that can become a lifesaver.

Ctrl Enter
Noticed oshЫbku Highlight text and press. Ctrl + Enter
We are
About revolution in military scienceMilitary reform as an integral part of the security concept of the Russian Federation: Systematic dynamic assessment
Military Reviewin Yandex News
Military Reviewin Google News
25 comments
Information
Dear reader, to leave comments on the publication, you must sign in.