The Kurdish battle, or Alone with tomatoes did not get off ...

February 19 2016
55
Today there is a great opportunity to actually observe in real time how the Turkish authorities are losing all kinds of shores. Just a few months ago, Erdogan tried to restrain himself, quite moderately announcing Turkey’s commitment to the anti-Igil (American) coalition, now that the main coalition ideologue behind the ocean cannot really explain the final goals and objectives of the operation, Ankara suffered. .. Literally at one time, the political elite of Turkey decided that it possessed the forces and means to wage war against the 44 million people - the Kurds - the people in Turkey alone numbering about 17 million people.


The drift of Ankara brought to the point that the Turkish security forces decided to conduct a military operation against the Kurdish population of three states at once. In addition to the bloody anti-Kurdish bacchanalia organized by the Turkish police and military in Jizra, Diyarbakir and other cities in southeastern Turkey, the army carries out attacks by Kurdish forces in two other neighboring states of Turkey. Gangs associated with the Jebhat al-Nusra and ISIS have been attacking the Syrian Kurds, which are pressing together with the government forces of the SAR, for several days now Turkish artillery has been attacking. And on the eve, the Iraqi Kurds, who were “ironed” from the air by the Turkish Air Force planes, got it. At the same time, an air strike by Turkish "falcons" was carried out against the background of numerous statements by President Erdogan and Prime Minister Davutoglu that several hundred Turkish military and several dozen in the province of Ninewa (Iraq) tanks and other armored vehicles - all this, you see, to provide training bases for Iraqi Kurds, for them, you know, support in the confrontation with Daesh (the so-called Islamic State).

That is, all the time while the Turkish occupation forces in northern Iraq were located, training of the Kurds was going on, and then suddenly they decided for the same Kurds, excuse me, lupanut from the air, and even without any international sanctions or an official invitation for such an operation. from Baghdad. Erdoganovsky’s message is approximately as follows: we understand that Kurds in Iraq were trained and trained, and they are arranging terrorist attacks here under our noses — then their attack!

Indeed, the air raid on the positions of the Kurds who are trying to resist ISIS in Iraq, Turkish aviation inflicted literally a couple of hours after the explosion in Ankara. However, even before the Turkish planes took to the air, the leaders of the Kurdish armed forces and political forces openly declared their non-involvement in the terrorist attacks in the capital of the “Erdogan Empire”. The statements of the Kurdish leaders can be treated as you like, but the fact remains: the Turkish army entered a new, even more active, movement precisely after the bombing of a car bomb in the immediate vicinity of the military hostel in Ankara.

It is worth noting here that the trailing fever of the Turkish leadership is connected not only with the fact that the terrorist geeks supported by them in Syria suffer a grand fiasco under the attacks of the ATS troops supported by both the Russian Aerospace Forces from the ground and the that the star-striped ally of NATO moos something inaudible. According to the official representative of the US Department of State, Washington cannot choose whom to speak for: “smart or beautiful”. He cannot, and therefore, in his statements, he calls Erdogan and the Democratic Union of Kurdistan allies the party, from which Mr. Erdogan has a nervous tic. The President of Turkey, pulling out his already not thick hairs on his head, calls the American ambassador to the carpet, demanding that Obama finally decide. But the “lord of the world” is walking with a limping duck walking around the Oval Office, and in no way can he understand that now it has become so difficult for him to get the second Nobel Peace Prize ...

Before the capture of the border with Turkey by the government forces of Syria (after defeating the militants in the city of Kessab in Latakia), it seems that a little time remains. What this will lead to for the same Erdogan is obvious. “Sultan” not only loses the opportunity to receive oil stolen from Syria, not only loses the ability to provide the militants with “brotherly help”, he sees the plan collapsing before our eyes. And if we consider that Mr. Erdogan invested more than seriously in the implementation of this plan, then both political and economic fiasco is a complete, tangible one. And in the seething whirl of thoughts in the head of the Turkish president, one begins to be dominant - “a military solution should help.” But after all, bad luck - if the plan developed over the years did not lead to the desired result for Ankara, then how to act in the format of unplanned force majeure? 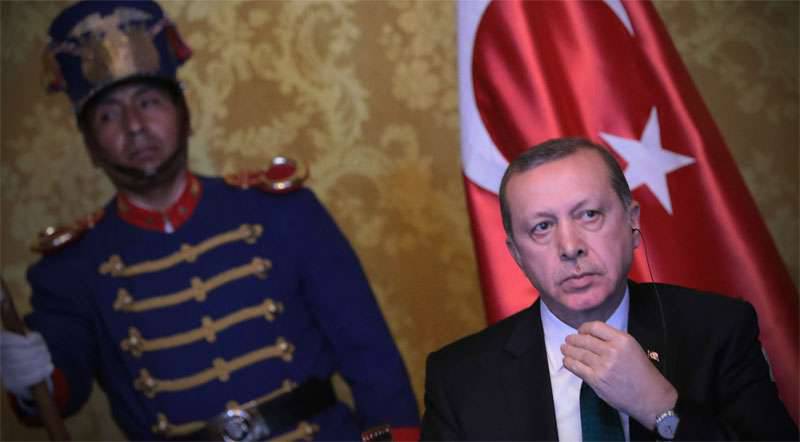 Ankara is trying to enlist at least someone’s support, realizing that the “nation of exceptional” clearly increasingly focuses on the domestic politics and elections of Obama's mate, rather than on the problems of the Turkish “friend” in NATO. Negotiating instruments with the Saudis, Qatari and even representatives of Sudan are going on, the authorities of which have declared that, in principle, they can carry out the deployment of their contingent to Syria. At the same time, the Sudanese, apparently, did not particularly try to clarify that while their military contingent is participating in exercises in northern Saudi Arabia, the Turkish political elite decided to finally turn against themselves the 44-million Kurdish people who know what it is to defend their land with weapons in the hands, although it does not have its own state. And if Erdogan seriously considers that with his bashing, more resembling agony, he will solve his problems, then it may once again be surprising that he reigns in his head.

Truly: I haven’t gotten away with some tomatoes ...

Ctrl Enter
Noticed oshЫbku Highlight text and press. Ctrl + Enter
We are
War in Turkish KurdistanTurkey against the Kurds. Is there a new phase of conflict ahead?
55 comments
Information
Dear reader, to leave comments on the publication, you must to register.