February 18 2016
103
Until recently, most residents of the Russian Federation had no particular complaints against Turkey. However, the logic of the conflict makes us think about what will happen if the tension between our countries moves to the plane of direct conflict. Trite comparisons of the forces of the parties to the conflict in terms of number and quality tanksships and planes, like 50 or 100 years ago, give a very distorted picture: suffice it to say that on the eve of 1939 the army of France was considered the “army” of the continent as the “best”, and the USSR was not even included in the top five. So it is today. Truly, these or other armed forces will be visible only in a real war. At the same time, it is much simpler to make forecasts of political relations between the parties, because here the actions of opponents are much more obvious: they are dictated by logic and geography. 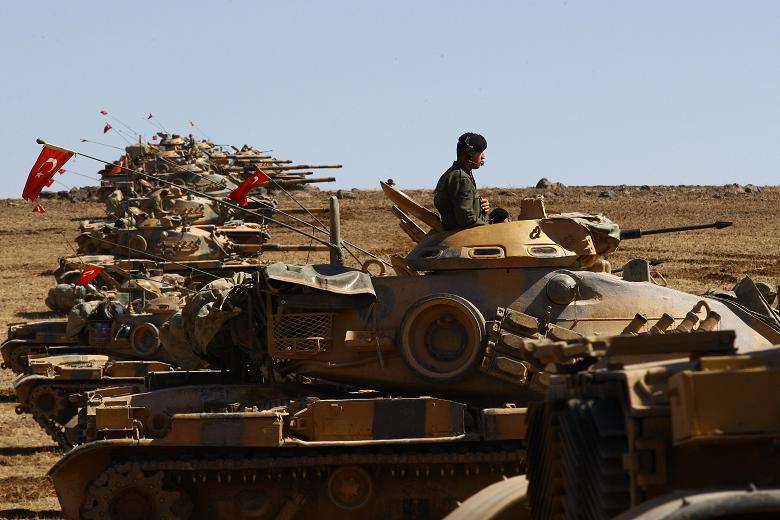 For five months, the Russian aviation made almost impossible in Syria, breaking the seemingly hopeless situation. Approximately the same words can be said of the naval forces, which have demonstrated not only new shock capabilities, but also the ability to supply the group for a long time. Even in Soviet times, such campaigns were very rare, and after 1991 no one dared to think of something similar. At the same time, Russian successes broke the well-known plans of the Sunni powers and provoked an extremely negative reaction from the patrons of the “Syrian opposition”. The transfer of Saudi Arabian F-15 fighters to Turkish airfields by many observers was regarded as preparation for a war with Russia in Syria. F-15 - a fighter for gaining dominance in the air, and it is Saudi cars of this type, which underwent modernization in 2012-13, today are one of the most modern in the world. On February 15, the start of a five-day Saudi-Turkish air exercise was announced, during which the air forces of the two countries will break in coordinated actions. A day earlier, exercises involving 150 troops began in the north of the Kingdom. At the same time, both Ankara and Riyadh, with simply unfriendly rhetoric, switched to the language of outright threats against Russia. For example, Saudi Arabian Foreign Minister Adele al-Jubair directly stated that it is dangerous to support Shiites in the Russian Federation, in which 20 million Sunni Muslims live.

True, already 16 February from Turkey, which was supposed to be the core of the invasion, sounded notes of uncertainty. They cannot be called dominant yet, because there is clearly a struggle between supporters and opponents of the intervention in the country, but there is definitely no former dashing confidence. Whether the bellicose statements were the original bluff, or the original intervention plans are now hastily adjusted, it is not yet clear. The only obvious thing is that the ground invasion of Syria is still questionable.

So, the first scenario. Russia understands that it and the Syrian government are being driven into a trap, forcing it to stop the destruction of the Islamists. The militants unequivocally use the respite to regroup forces and replenish supplies, and then expect trouble. Awareness of this simple fact makes Moscow and Damascus continue the destruction of terrorists, which is tactically and strategically absolutely true. In response to the actions of Moscow, Turkey and Saudi Arabia are invading Syria. Does this mean that a no-fly zone is no longer important for Russian and Syrian aviation?

The war with Turkey or Saudi Arabia, even one by one, is an extremely difficult task. And together this is an opponent of quite a serious level, incomparable with any country in the post-Soviet space, with the exception of Russia itself. If such a collision becomes a reality, the transport question will remain a critical moment for our group: namely, how many supply ships Russia will have time to pass through the Bosphorus before the start of the war. It depends on the promptness of the Russian military logistics, as well as on how long the enemies (this term is already appropriate) took the time for their own preparatory activities. In any case, the expeditionary corps of Russia in Syria will be in an extremely difficult situation, and its ability to repel coalition attacks will be exhausted in a few days, after which you will either have to admit defeat, or from the territory of mainland Russia strike directly at the interventionist countries, which will conflict at a fundamentally different level.

Scenario two. Moscow gives in to threats, curtails the bombing and unscrews the hands of the Syrians, so that they stop the offensive. Militants get a breather, replenish supplies, carry out the regrouping of forces. In fact, this is already a defeat. It should be understood that even completely leaving the entire Middle East, Russia will lose, because Ankara and Riyadh, having received their own, will pay attention to the post-Soviet, and then the Russian space itself. In the East, frank weakness is not forgiven, and nobody has canceled banal revenge, let alone objective geopolitical ambitions.

Moreover, the surrender of positions under threat of war will very badly affect the reputation of the Russian Federation in the world. And the reason is not important here. The bell itself will sound loudly and unequivocally from the Arctic to the Caucasus, from the Baltic to the Pacific Ocean: “Akella missed.” And then already to try for a tooth the Russian determination will have a desire already very, very many. And, most importantly, all at once. The prospect of an open war with the Turks and the Saudis at once, compared to this threat, is simply child talk.

In fairness, I must say that Turkey and Saudi Arabia are no better than the Russian. Each of these countries leads a hopeless war on its territory. Turkey with the Kurds, Saudi - with the Hussites who invaded from the territory of the former North Yemen. Both of these wars are depleting, despite the fact that not one of these regional powers is close to the Soviet Union at the time of the entry of the 40 army into Afghanistan. The invasion of Syria for Ankara and Riyadh will also be quite a local catastrophe: a new front will require additional resources that still need to be obtained from somewhere.

Actually, for this reason, the allies in the anti-Syrian coalition went to large-scale military blackmail of Russia, in the hope that Moscow would tremble and begin to retreat again. In fact, this is most likely only a large-scale bluff. How this bluff succeeded, will show the very near future. Now we can say that most failed. The paradox of the situation is that in the conditions of direct military blackmail, it is almost safer for Russia to take the risk of war than to show weakness to the whole world for the second time in two years. This simple and unpretentious thought would not hurt to convey through diplomatic channels to the right people who imagined themselves to be the Napoleons of the East.

For now, the actions of Russia can be praised carefully. Nobody gives in to blackmail, attack aircraft and front-line bombers continue to do their jobs. Around the Turkish shelling of Syrian territory raised due diplomatic noise, which is also correct. In the event of an aggravation, it is Turkey that will have the halo of the aggressor in the public opinion of many countries.

Turkey’s invasion of Syria can hardly count on NATO assistance. In any case, legal obligations for such a case are not provided for, since the Alliance formally must stand up only for the victim of an attack. How it will actually depend on the firmness of the Russian position and the readiness to defend your interests by force weapons. The fate of the unfortunate Yugoslavia and Libya, who did not attack anyone, should always remind us what the Alliance is capable of when it feels its own impunity. The weak are always beaten and no contract is valid here.

At the same time, when a collision with a relatively serious opponent loomed on the horizon, NATO found a reason not to get involved. This happened during the invasion of Indonesia into the Netherlands New Guinea or during similar Indian actions against Portuguese Goa. Yes, formally these territories did not fall into the Alliance’s area of ​​responsibility, but the spirit of unity was completely undermined. Surprisingly, in 1975, the annexation of Western Sahara, organized by the authorities of Morocco, has already fallen into the geographical scope of the Alliance, but he did not react at all. If you wish, you can remember other interesting episodes. All of the above does not mean that NATO is an inefficient organization with indecisive leadership - not at all, but a couple of touches to the overall picture of this organization should be added for reasons of fairness. There are other legal subtleties. Military assistance, prescribed in the agreement on the creation of the Alliance, does not imply the mandatory dispatch of troops, but only the provision of military assistance, which may include, say, the supply of fuel or ammunition.

Among other things, in NATO there is such a Trojan horse, like Greece. Of course, this country will not openly stand on the side of Russia, but for some time it will be able to sabotage the work of Alliance structures. Athens has its own interests. If the victorious march to Constantinople is still fiction, then helping Cyprus in the elimination of the Turkish garrison against the background of a general struggle is a quite solvable task.

An additional front for Russia threatens to be the same Ukraine, which in small steps restores its own armed forces for continental war. However, the main problem lies not even in the possible participation of Kiev. More precisely, not only in it. As we all remember, Russia has frozen conflicts almost along the entire perimeter of the borders, with the possible exception of the Arctic expanses. Only officially we are involved in about 5-6 in such conflicts, unofficially this figure can be at least doubled. If we talk about the possibilities of the opponents to create additional sections of tension for the Russian Federation, then we primarily mean the North Caucasus and Transcaucasia. Moreover, the Transcaucasus will be even more convenient for a number of reasons. The outlines of this logic are literally on-line: on February 17, Turkish Foreign Minister Mevlut Cavusoglu visited Georgia, where he met an exceptionally warm reception, and a day later Recep Erdogan was expected in Azerbaijan.

From the very beginning, the actions of the Turkish-Saudi coalition had the features of provocation in order to force Russia to make concessions through threats. But now the Turks were also trapped, the artillery strikes of which caused discontent in the United States and Europe, which in turn actively supported the Syrian Kurds. How to get out of such a difficult situation, Erdogan and his advisers, apparently, have not yet decided. Turkish officials have already managed to make several statements, directly opposite in content, but in any case everything will be decided in the coming days.

Ctrl Enter
Noticed oshЫbku Highlight text and press. Ctrl + Enter
We are
The armed forces of Syria on the eve and during the uprising in the republic (2011 — 2013)Turkey vs Syria: the balance of power
103 comments
Information
Dear reader, to leave comments on the publication, you must to register.