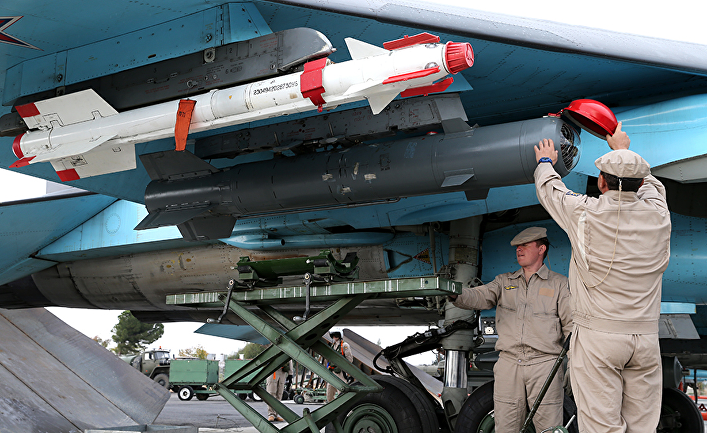 Exact bombardment can be conducted in two ways. The first is the use of "smart ammunition", which first attracted media attention during the "live broadcasts" from the Gulf War in 1991. In the current Syrian conflict, the Russian side has demonstrated another option - the clever use of "stupid" (hated) bombs.


Most of the air raids in the Syrian conflict are Russian aviation carries out with the involvement of front-line bombers Su-24M2 with variable geometry of the wing and fighter Su-25SM. These are modernized aircraft of fairly old types. Russian planes strike with the overwhelming majority of targets using hating bombs. Despite this, it seems that even with such a load, Russian aircraft are capable of hitting point targets with fairly high accuracy. To do this, use the complex deck Specialized computing subsystem SVP-24.

SVP-24 determines the exact place, or rather, it is better to say, the moment of automatic resetting of the “stupid” bomb so that it hits a certain target on the ground, falling as close as possible to it. The system takes into account exactly known positions of the target and the aircraft (data obtained from the satellite navigation system GLONASS), the speed and altitude of the aircraft and the angle of inclination of the aircraft, and also takes into account the data on the ballistics of a particular type of ammunition. In addition, hydrometeorological conditions (atmospheric pressure, wind, humidity) in the area, which vary with time and altitude, are taken into account. Of course, the accuracy of the system itself depends on the accuracy and sufficiency of the input data.
The information material of the manufacturer speaks about increasing the accuracy of an unguided bomb at a target eight times when using SVP-24 on Su-24M aircraft, so that the accuracy of using a “stupid” bomb supposedly approximates the use of a controlled bomb. Also, the aircraft can maneuver within certain limits, even when approaching the target, which, according to the same document, increases the pilot's chances of survival by 30-40% in the case of an active enemy air defense. As such figures were set, the material does not say.

Major General Igor Semchenko, in an interview with the Russian industry newspaper Military Industrial Courier, published on December 2, 2015, reports that with the SVP-24, the probability of hitting a small underground protected target (for example, a bunker) increases by 30-40%, and in the case of poorly protected medium-sized targets (warehouses, buildings, bridges) - by 60%. Therefore, one Su-24М with 12-16 "stupid" bombs can, according to Semchenko, for one sortie destroy up to two targets of the enemy’s infrastructure.

If you use all this information — although it can be recognized and unconfirmed — and add pictures from the Syrian airfield, from where the Su-24М2 rise into the sky, as a rule, with four “silly” 250-500 caliber bombs (although they may take small ones on board huge set), then all this can be considered as indirect evidence of the effectiveness of the system SVP-24.

Despite the fact that due to the participation of the Russian side in the conflict in Syria, even some Western media positively respond to the SVP-24, today this system has not fallen to the Middle East. In 1992, the company Hephaestus IT was established in Zhukovsky (Ramenskoye military aviation complex), which carried out orders of the Ministry of Defense for automated and information systems in the field of aviation. Soon the specialists of Hephaestus were assigned the task of developing an onboard computer system for upgrading the Su-24M.

So in 1996, the SVP-24, already known to us, was born (now it’s clear where the name 24 comes from). However, the path to modern operational use was long: the project was suspended several times and resumed. Because of competition with other projects, allegations of corruption were heard, in general, it was all the same as in other countries. In the first decade of the new millennium, the Su-24М2 with Hephaestus successfully passed the tests, after which an unknown number of aircraft put into service were equipped with the system.

After the modernization, which consisted primarily in the installation of the SVP, Sukhoi aircraft were designated Su-24М2. True, the 2 figure is often not indicated, and there is another difficulty: the Su-24М2 designates also the aircraft upgraded according to another program of NIREK, which, however, does not imply the computer equipment of such complexity and functionality as the Hephaestus system.

The SVP-24 itself consists of several components located on board the aircraft, and interacts with external ground, air and space systems, from which it receives the necessary data. That is, SVP-24 is one of the elements of the so-called digital battle and serves not only for targeting "stupid" bombs. The system has improved navigation and increased safety at low altitudes in automatic mode. It is also important that it was possible to even reduce, albeit slightly, the costs of operation and maintenance of avionics.

The potential of the new system contributed to the development of its modifications for use on other aircraft of old types. Today we know about the existence of, for example, SVP-24-22 for strategic bombers Tu-22, SVP-24-25 for fighters Su-25, SVP-24-27 for fighters-bombers MiG-27, and for training purposes was created SVP-24-39 for the still used Aero L-39 Albatros.

It should be noted that OFAB-250-270 weighing 266 kilograms comes across most often in photos. Other types of bombs used by Russian aviation in Syria include high-explosive bombs FAB-250 and FAB-500, as well as concrete-breaking BETAB-500 and cluster RBC-250.

In addition to the bombs, the bombs are still used, albeit in smaller quantities, by smart bombs. For example, the most modern KAB-500С with satellite guidance, which are dropped by Su-34 bombers. To complete the picture, we can also mention the use of air-to-ground guided missiles and missile blocks with unguided rockets. However, all this is no longer relevant to the topic of "stupid" bombs dropped by SVP-24.

The Austrian edition of Contra Magazin writes: “If NATO, above all, the United States, invests in weapon and systems of total observation, Russia uses its technological ingenuity to minimize costs. ”

But not everything is so simple. One should not imagine that the use of systems like SVP-24 will completely replace the "smart" bombs. Evaluating the value of SVP-24, we must not forget that the calculation for dropping bombs is not the only function of the system, as mentioned above.

But when compared with the “competitive” methods for solving the exact bombardment problem, we better see the advantages and disadvantages of the system. Yes, “cheap” standard ammunition is used, without the involvement of complex kits (such as American JDAM), so that the costs of ammunition do not increase, and no extra careful handling is required.

But the drawback seems to be the inability to influence the trajectory of the bomb after dropping from an airplane. On the other hand, there is no threat of signal loss, which, for example, can occur due to clouds, smoke or dust in the case of armaments that are induced by a laser. This implies the impossibility of using SVP-24 against moving targets, although one should not understand it as a dogma (an example is a moving column, etc.).

“The smartest” weapons in principle should be more accurate than a “stupid” bomb using SVP-24, in which case the accuracy is determined by the sufficiency and correctness of the input data.

Ctrl Enter
Noticed oshЫbku Highlight text and press. Ctrl + Enter
We are
Front lines in the Syrian conflict as contours of the future world orderResults of the week. “A smart face is not a sign of the mind”
69 comments
Information
Dear reader, to leave comments on the publication, you must to register.