December 26 2015
41
The Concern Radioelectronic Technologies delivered to the Ministry of Defense the first batch of vehicles adapted for transport Aviation electronic warfare systems of the Vitebsk family, transmits RIA News a message from the deputy general director of the concern Igor Nasenkov. 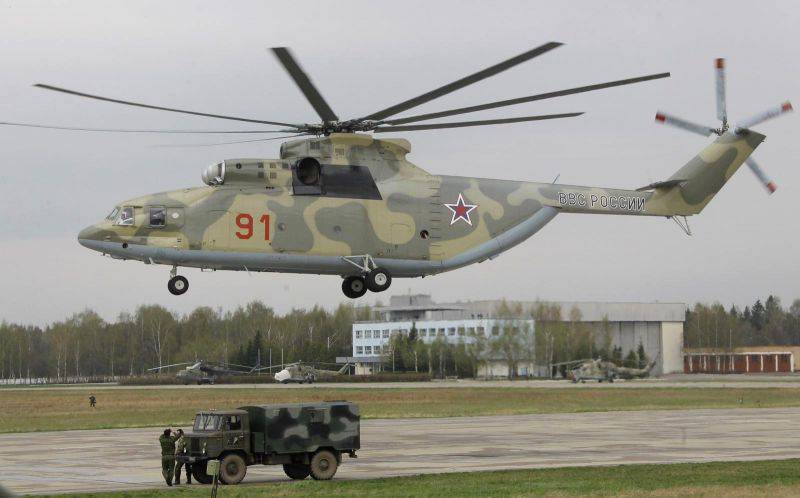 "Vitebsk" is already supplied for combat helicopters and attack aircraft Su-25. According to the manufacturer, it is “designed to protect aircraft from enemy anti-aircraft missiles with infrared, radar or combined homing heads.” This system allows you to track the launch of a rocket within a radius of several hundred kilometers and "lead" the missile from the target.

“KRET delivered to the customer the first batch of radio electronic warfare complexes of the Vitebsk family adapted for transport aviation. A new modification of "Vitebsk", which is just beginning to enter the troops, will be installed on board the aircraft and helicopters of transport aircraft. It is planned to equip this system with the Il-76, Il-78, An-72, An-124 aircraft that are already in service with the Aerospace Forces of the Russian Federation, as well as the promising IL-112В transport aircraft. In addition, the EW complex is installed aboard transport helicopters of the Mi-8 and Mi-26 families, ”said Nasenkov.

According to him, “the implementation of this program will make it possible in a short time to significantly increase the combat sustainability of transport aviation of the Russian Aerospace Force.

“During the tests, the Mi-8 helicopter, equipped with the Vitebsk complex, was fired from the Igla man-portable air defense system. Of the several dozen missiles launched in a helicopter, none reached the goal, ”said the deputy head.

Nasenkov also reported on the work of KRET on the creation of a new EW helicopter complex “Rychag-AVM”.

“KRET is completing development work on the creation of a new specialized jammer based on the modern Mi-8AMTSH helicopter. At present, the first experimental model of the new EW complex, called the “Lever-AVM”, has been transferred for testing. In case of confirmation of the specified characteristics, this station will become the most powerful in its class not only in the Russian Federation, but also in the world. Serial production of "Lever-AVM" is planned to expand over the next two years, "he said.

“The current generation of active helicopter stations, Lever-AV, is used in the military. It was highly appreciated by the Ministry of Defense. This year KRET has already handed over to the troops the second batch of Mi-8MTPR-1 helicopter complexes with the “Lever” on board. Each of them is capable of conducting reconnaissance and suppression of radio-electronic systems of command and control of troops and weapons enemy within a radius of several hundred kilometers, providing group protection for airplanes, helicopters, UAVs against enemy aircraft and air defenses, and ground equipment and ships against air attacks, ”said Nasenkov.

“The new generation of the“ Lever ”system will be an order of magnitude superior to its predecessor. During its development, we fully took into account economic and technological requirements. Interference station consists of unified modules that are installed on the helicopter. The release of most of these modules has already been mastered by the enterprises of the concern. This will favorably affect the final cost of the product, its reliability and the pace of mass production, ”he explained.

“Acting outside the means of defeating the enemy, Lever is a difficult goal for them. In addition, the “Lever” system stores a database of all military facilities, which allows it to determine the type of target and select the most effective interference for it, ”the deputy general director said.