The operation of the Russian HVAC in Syria continues successfully. However, recent events on the counterterrorism fronts in this area show that a broad international coalition, whose troops would closely coordinate their efforts in place, time and goals, as required by elementary tactical norms, does not add up.

On the other hand, despite the successful results of the air strikes, the militants have not only failed weaponsbut also counterattack on separate sectors of the front. And taking into account the fact that the ways of replenishing people, equipment and ammunition for militants from the open borders of Turkey, Iraq and Jordan remain, the effectiveness of the bombings decreases, and the tension on the contact line remains. 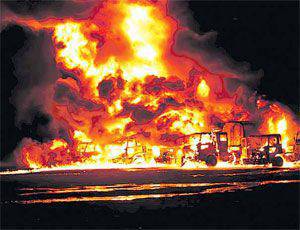 The fighters in front of the airstrikes of our VKS and in the course of strikes flow in the indicated directions, like mercury, and appear already in the new sections of the Syrian front armed, technically equipped.

Obviously, an effective land counterterrorism operation is indispensable. But the Syrian army, exhausted in daily clashes with extremists, is not yet able to conduct a large-scale sweep on its own.

Russia refrains from carrying out such an operation, which at the moment in the situation prevailing in the world seems right.

But helping the upcoming Syrian formations is possible and, in my opinion, necessary. The main thing is not to let yourself be drawn into the bloody daily battles of local significance, in which significant casualties of our servicemen are likely and the most dangerous one is their captivity.

It seems expedient and necessary to start to block the 98-kilometer “corridor” on the border with Turkey, from where the main stream of material and technical supply of the armed groups comes. To do this, as one of the options, it is necessary to place the strong points of our landing force with reinforcements on the three main roads leading to Turkey, that is, in fact, become garrisons, which does not contradict the general concept of the presence of Russian troops in Syria. The task is to prevent the movement of people and equipment, including, naturally, gasoline tank trucks with stolen oil. In the intervals between roadblocks, mobile fighter groups must operate on the combat vehicles of the assault force to prevent attempts to penetrate the territory of the SAR from Turkey and back to bypass our roadblocks.

A good help land forces of Syria could be the destruction of these highways from the air. Thus, the criminal oil traffic will be stopped, the material and technical supply of the bandits will stop. Conditions will be created under which it is impossible to restore the combat capability of terrorist detachments after our bombardment.

Both options, de jure and de facto, are aimed at the elimination of the “Islamic state” prohibited in Russia and do not envisage a direct military clash with Turkey. Moreover, the solution of the main task of fighting the IS is accelerated: the destruction of terrorists “to the last gangster”.

Ctrl Enter
Noticed oshЫbku Highlight text and press. Ctrl + Enter
We are
What you didn't want to know about EnglandInterview by President Bashar Al-Assad to the Sunday Times
Military Reviewin Yandex News
Military Reviewin Google News
95 comments
Information
Dear reader, to leave comments on the publication, you must to register.