December 3 2015
55
The Russian-Turkish conflict, caused by the attack of the Turkish fighter on the Su-24 bomber, has aroused public thought among those who want to solve international problems with outsiders. There are such politicians in the Russian open spaces. Their eyes turned to the Kurds. The media filled out proposals on how to weaken or even crush Turkey with the help of this divided people. 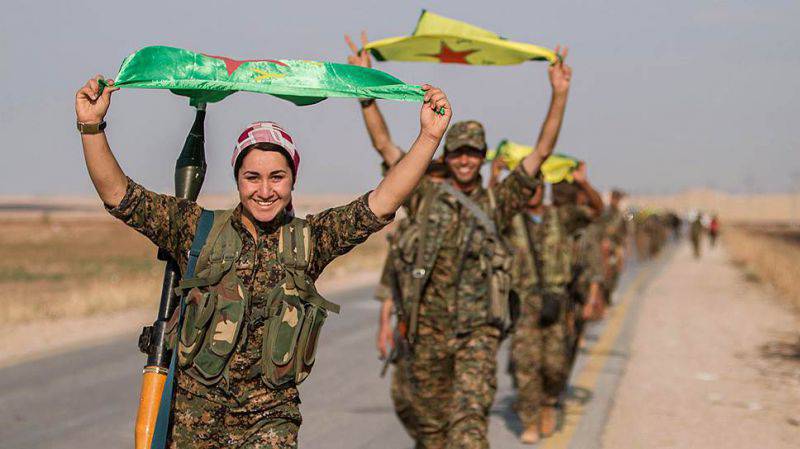 Admittedly, variations on the Kurdish theme did not arise from scratch. Russian diplomats have been developing it since summer. In early June, at the invitation of the Ministry of Foreign Affairs, a delegation of the Kurdish Supreme Committee headed by the leader of the Democratic Union Party, Salih Muslim, visited Moscow. The results of the meetings in the Russian capital inspired the Syrian Kurds to expand cooperation. Muslim even spoke about the possible establishment of diplomatic relations.

Contacts with the Kurds intensified sharply after the start of the operation of the Russian aerospace forces in Syria. In October, the Deputy Foreign Minister of Russia, Mikhail Bogdanov, first met with Salih Muslim in Paris, then received a party delegation in Moscow led by Asya Orman. At the same time, it was announced about the opening of the representative office of the Kurdish “Democratic Union” in the Russian capital.

As the Turkish newspaper Hurriyet writes later, Ankara is concerned that the weapon can be used by the Kurdish Workers Party (PKK), which is banned in Turkey, with which, according to the Turkish Foreign Ministry, the Syrian Kurdish Democratic Union cooperates. The British agency Reuters, citing its high-ranking sources, will name the main reason for calling ambassadors. They were warned that Turkey would not put up with the advance of the Kurds to the Turkish border - that is, on the territory controlled by the militants of the Islamic terrorist group.

Perhaps this is the essence of the diplomatic demarche of the Turks. They knew about the supply of weapons before, but did not react to them. After all, Russian Foreign Minister Sergey Lavrov also made a statement at October 1 at his press conference: “We supply weapons to the Kurds through the Iraqi government, and in the information center established in Baghdad, which includes representatives of the military of Iraq, Syria, Iran, Russia, the Kurds are also there presented. (Quote by RIA "News").

Why does Russia supply weapons to the Syrian Kurds, said Russian President Vladimir Putin. He called on the Kurdish National Self-Defense Detachments to work with the government of Bashar al-Assad in the fight against the terrorist group that calls itself "Islamic State".

All this was public diplomacy. Direct interaction with the Supreme Committee of the Syrian Kurds, which in the conditions of the war in Syria took over the functions of the interim government in the Kurdish region of Rojava, began two days after the Turks shot down the Russian Su-24 and shot its pilot. Aircraft of the Russian Aerospace Forces began to bomb settlements on the Syrian-Turkish border controlled by Islamic militants - in particular, the town of Aziz and the checkpoint Bab al-Salam, through which ISIS is being supplied from Turkey. In addition, the Russian aviation inflicted a series of aerial attacks on Islamist positions in Deir Jemal, where the front line is now passing between the Syrian Kurds and the militants, the so-called moderate opposition, from the Free Syrian Army.

You can continue to give examples of Russian support for Kurdish troops. It is important that today, in full compliance with the request of the legitimate government of Syria for military assistance, the interests of Russia and the Supreme Committee of the Syrian Kurds coincided.

Four branches of one people

Speech, as we see, is exclusively about Syrian Kurds. Other groups of this ethnic group remain outside the brackets of current relations and hardly give Russia a reason to play geopolitics with "Kurdish maps."

The region, which is called Kurdistan, will stories divided between four countries - Iran, Iraq, Syria and Turkey. It is formed from numerous tribal groups speaking different dialects of the Kurdish language. (Refers to the subgroup of Iranian languages.) Diverse among the Kurds and religious preferences. There are among them Yezidis, Shiites, Islam-Alevis, Christians, but most of them are Sunni Muslim.

All these differences are complemented by local characteristics and traditions of the countries in which the Kurds live. Therefore, I think, it is more correct to talk about the four branches of one people. Take, for example, the Iranian part of the ethnos. It has over five million people. According to the tradition established in the country, it is believed that these people are primarily Iranian citizens - as well as Armenians, Azeris, Turkmen, representatives of other nationalities.

Ayatollahs, to put it mildly, do not welcome the attention to the topic of national minorities and rigidly suppress politicians who defend the interests of certain groups of the population. It is not by chance that the Kurdish parties of Iran are mostly in the underground, and some even lodge in neighboring Iraq.

Here in Iraq, the most respected community of Kurds. Its leaders - the Barzani clan - comes from the Sufi sheikhs, who originated from the medieval emirs of the principality of Bahdinan. A major role in the history of Iraqi Kurds was played by their national leader Mustafa Barzani. After the Second World War, the neighbors, in the territory of Iranian Kurdistan, the Kurds managed to create the Mehabad Republic. Mustafa Barzani was the commander-in-chief of the army here.

The republic existed for less than a year. At the end of 1946, the Iranian authorities again took control of the territory, and the Kurdish leaders were executed. Mustafa Barzani, with 500-elite fighters, managed to flee to Azerbaijan, and from there the USSR authorities transferred them to Uzbekistan, where the Kurdish community, who had been evicted from the Soviet Transcaucasia, already lived in 1937. After the fall of the Mekhabad Republic, the Barzani family, together with the entire Barzan tribe, returned to Iraq. Mustafa will appear here only after the fall of the monarchy, in 1958 year.

The current president of Iraqi Kurdistan, Masood Barzani (who is also the chairman of the Democratic Party of Kurdistan), is the son of the legendary commander of the Kurds. Rod Barzani is represented today at the most important posts of this state entity. Kurdistan has its own armed forces (peshmerga) numbering over 100, with heavy armored vehicles (more than 000 tanks), artillery, small arms. Those who rely on this force should be reminded of Russia's support for the spreading Kurds, Saddam Hussein, and the Uzbek story of the parent of the incumbent president of Kurdistan. The oriental man Masoud Barzani does not complain of memory.

In Syria, Kurds are smaller than those of their eastern neighbors in Iraq. However, they constitute 15 percent of the country's population - the second largest. Syrian Kurds glance at Iraqi tribesmen and do not hide their desire to get the same autonomy. During the civil war, government forces left their territory. Now local Kurds have more political, military and economic autonomy, but the war does not yet allow the realization of plans for broad autonomy.

There is no due unity in the ethnos itself. As a well-known Turkish political scientist, Financial Times columnist Hakan Altinay, during the battle for the city of Kabany, ethnic Kurds fought on both sides of the front. Moreover, among the Islamic militants there were half of them. All this is a convincing warning to those whose fantasies about “Greater Kurdistan” may break in a new bloodshed due to spheres of influence, now not on a religious, but on an ethnic basis.

Even more confusing is the picture of ethnic Kurds in Turkey. According to the official information of the Turkish National Council, they constitute 18,7% of the country's population. Experts call another digit: 30-35 percent. The difference is explained quite simply. When Mustafa Kemal Ataturk formulated a national idea, he came up with a certain commonality - the Turkish people, which included representatives of all nationalities inhabiting the country: Ottomans, Kurds, Arabs, Armenians, Circassians, etc. For Ataturk (half Albanian, half Macedonian!) It was natural. Historians believe: such a reformatting of the consciousness of an entire people was the only way to preserve this people in principle. And they give an example - there was not a single ethnic Ottoman in the government of Ataturk. The consequences of that longstanding policy are affecting today.

In a sense, this can be compared with the Soviet period, when people, say, with Belarusian and Ukrainian roots and surnames, broke away from the root ethnos, and are now quite convinced of their Great Russian origin. Exactly the same happened with the Kurds, many of whom began to consider themselves Turks.

Kurds settled throughout Turkey. There are many of them in the capital and Istanbul, in large industrial centers. Among the Kurdish elite, there are secular people, and there are those who support conservative Islam, professed by the current leaders of Turkey. Nationalist tendencies predominate mainly in the east of the country, in regions close to Iran and Iraq. But even here, half of the population votes for the main Turkish parties. The second most popular in these places (after the PKK) is the party of the current Turkish president.


In short, the palette of the life of the Kurdish ethnic group is so diverse and multi-vector even in a single country, that from this patchwork quilt of interests, preferences, traditions and goals, it is not easy, if possible, to put together a coherent picture.

Therefore, those who like to play political poker on the Kurdish issue will be disappointed. Most likely, the geopolitical stake on the Kurds will not bring anything except chaos like the “Arab spring”. And Russia, as always, will have to rely on its own strength and to achieve goals that meet the national interests.

Ctrl Enter
Noticed oshЫbku Highlight text and press. Ctrl + Enter
We are
Turkey against the Kurds. Is there a new phase of conflict ahead?Syrian Kurdistan: Will there be peace and freedom?
Military Reviewin Yandex News
Military Reviewin Google News
55 comments
Information
Dear reader, to leave comments on the publication, you must to register.