November 24 2015
15
One of the Wehrmacht weaknesses of the 1941 model of the year was low discipline of personnel. This is the conclusion reached by analysts of the Soviet military intelligence, after analyzing the results of the first weeks of the war. 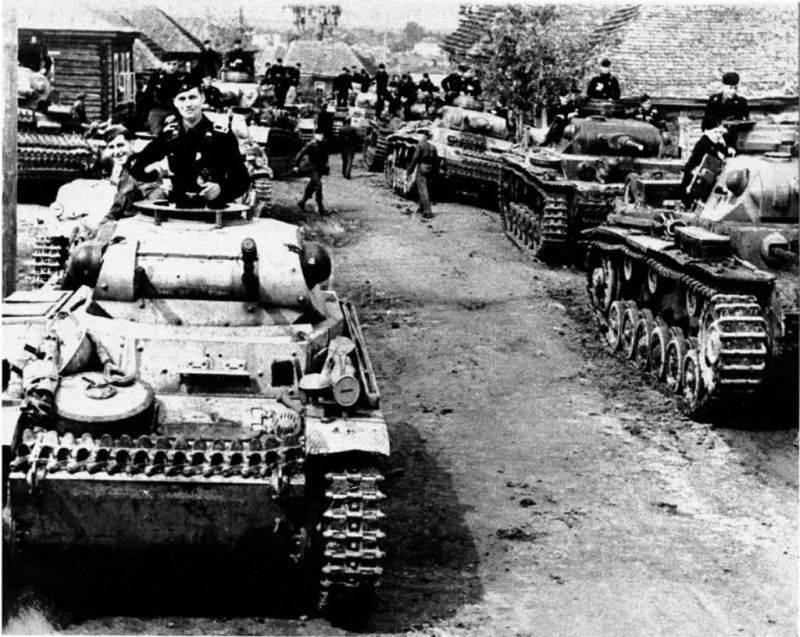 German Tanks in the region of Rzhev. 1941
By the middle of the summer of 1941, the reconnaissance headquarters of the Western direction noted that the enemy had airplanes attached to the tank units during the battle, which corrected the battle of the tanks with appropriate signals:

a) a “yellow rocket” - and a capsule with a report was thrown out, tank crews found this capsule, read and transmitted to the commander of their tank division the content of the report;
b) “red rocket” meant: “enemy tanks” and “we take measures of defense”;
c) “green rocket” - “the enemy is coming (and from where)” and “we are taking counter-attack measures” *.

The control inside the German tank divisions was carried out only by radio, and each tank had its own number, and the tasks were assigned by radio to both individual tanks and platoons and subunits **.

Having studied by that moment documents captured from the enemy, testimonies of prisoners and observations of the Soviet commanding staff, the Western headquarters intelligence department noted that the enemy, as a rule, operated in small detachments of 15 to 30 tanks, using a motorized battalion, one or two artillery divisions, and a group motorcyclists from 10 to 15 people. On the main highways supported them aviation (from 3 to 10 aircraft). German tank units and subunits singled out the so-called strike groups as part of a tank platoon reinforced by sappers for reconnaissance of the defense line and combat guards, mastering the gorges and bridges that were important for the advance of tanks and motorized infantry, and also making passages in wire fences *. 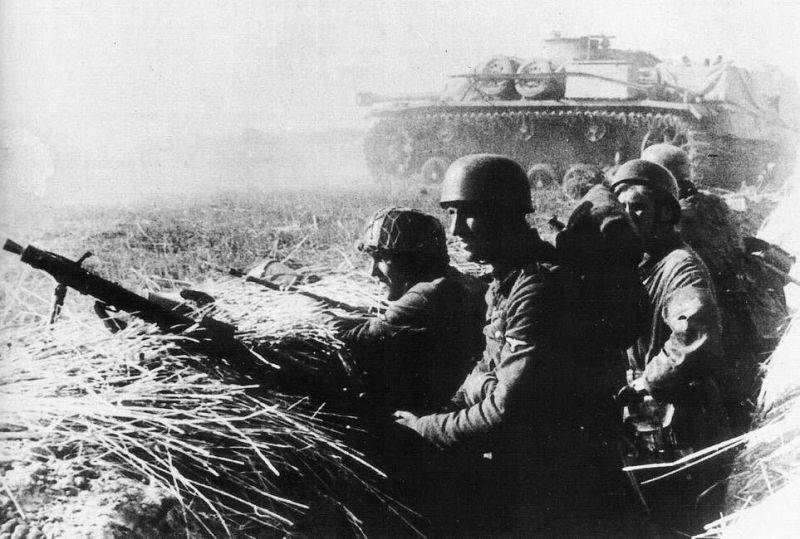 The shock groups were followed by reconnaissance groups from various types of troops, mainly motor-mechanic units, the attack of which was preceded by a raid by bomber aircraft operating according to the combat formations of the Soviet infantry, artillery and tanks **.

German tanks (from 10 to 15), taking possession of the abroad, were dispersed on 3 – 5, after which the enemy’s infantry occupied the line that tanks had already captured. At the same time, anti-tank artillery was advanced to firing positions to repel the attacks of Soviet tanks. German tanks were followed by motorcyclists and infantry units on armored trucks, and the German infantry itself was reinforced by sappers, artillery, and mainly mortars *.

At the frontiers of organized resistance, the enemy, after a short (from 15 to 45 min.) Aviation and artillery preparation with tanks, launched an offensive. Artillery fire was corrected from the aircraft by radio and signals, and cases of the use of balloons (in the area of ​​Kartuz-Berezy) were also noted. Artillery fire led across the square, combing the entire strip. From airplanes, the signal was applied by artillery impact objects - a “red rocket”, forming a smoky red stripe from top to bottom **. 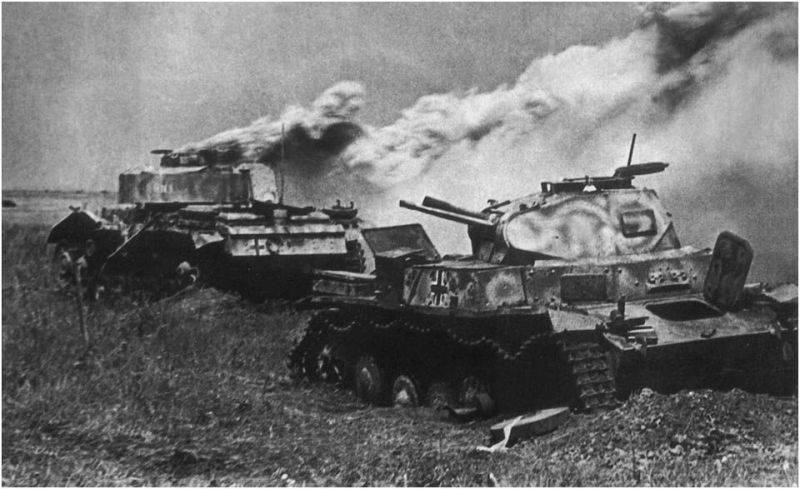 Ahead of the enemy acted light tanks and wedges. The latter, entering the battle, revealed the defense system, artillery positions, machine-gun nests, after which a group from 5 to 10 medium tanks was advanced, which suppressed the fire system of the Soviet defense, and first of all anti-tank weapons. Light tanks followed the averages.

German motorized infantry, hiding behind tanks from the front, as a rule, "drunk" went on the attack. Repeated cases were noted when enemy tanks and infantry, having met with well-organized resistance from Soviet units, retreated *.
It was repeatedly established that the German infantry, not covered by tanks, did not accept the battle and, as a rule, departed (in the area of ​​Lipovichi and others), causing aircraft to operate according to the Soviet order of battle **. 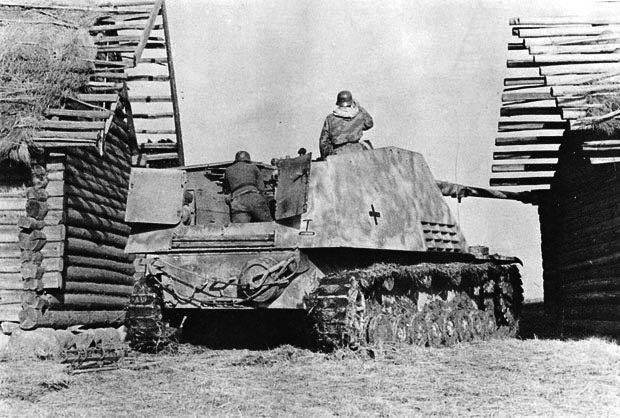 If the offensive succeeded, the German infantry would get on their cars and catch up with their tanks from the line to the line, fearing separation from the tanks and not taking the bayonet strike of the Soviet units ***.

To create false visibility about the number of tanks, there were cases when the enemy used tank dummies ****.

The enemy's artillery fired along roadsides on the sides of the road, extensively using mortars, which were often grouped and bombarded the area to a depth from 300 to 400 m, first acting with a diverging fan, and then moving on to a parallel and converging fan *****.

It was noticed that the enemy additionally installed heavy machine guns on tanks and seated machine gunners. With the occupation of the line, machine guns were removed from the tanks and installed in firing positions, opening fire simultaneously with the fire of tank artillery and machine guns.
Tanks of the enemy sought to act on the flanks and center of the Soviet defense, using fire tanks (near Borkovichi).
There have been cases where the enemy used captured Soviet aircraft for action on Soviet units, bombarding and firing at a strafing flight. Separate enemy groups (saboteurs and amphibious groups) dressed in Red Army uniforms, in the uniform of the commanders of the Red Army and the NKVD, and penetrating the area of ​​the Soviet units, had the task of sowing panic and conducting reconnaissance *. 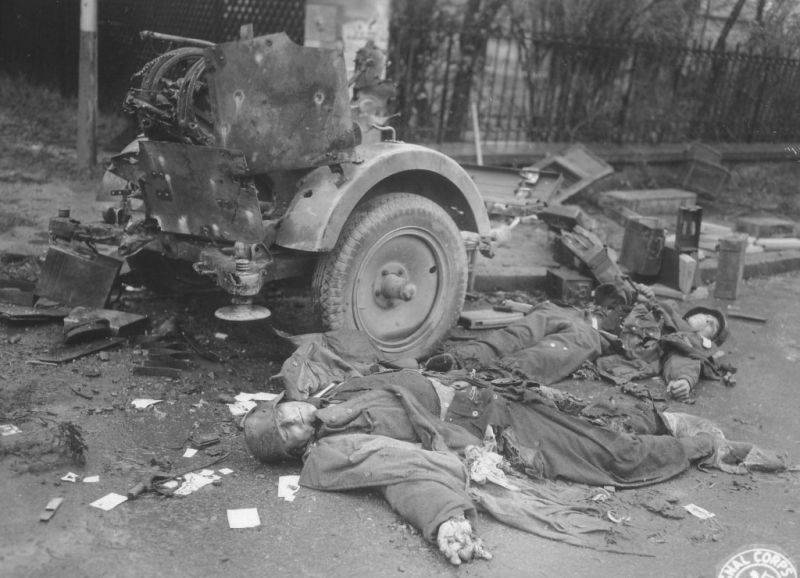 Killed German soldiers and broken anti-aircraft gun
In the process of examining captured documents to search for the weaknesses of units of the Wehrmacht, the intelligence department of the headquarters of the Western direction was noted in an extract from the orders on the 18-th tank division and the 47-th motorized corps of the enemy, which prohibited any shooting weapons and all shooting at chickens, dogs, cats and other animals, as well as orders, cases of robbery were noted. So, in the order for the 18 Tank Division from 03.07.41 it was said that the march discipline did not withstand any criticism **.

The commander of the 47 tank corps required every officer to fight against violations of the march discipline and report to him about the guilty, thereby ensuring the rapid conduct of offensive operations, otherwise promotion of two divisions on the road will become impossible *.
In this regard, the intelligence department of the headquarters of the Western direction stated the fact that the discipline in some parts of the German army was low **.
Continuing to analyze the strengths of the units of the Wehrmacht, the intelligence department of the West Directorate emphasized that control in the enemy troops was characterized by widespread use of radio, in which plain text, encoding only settlements, reports should be provided hourly, containing information about the enemy, the German front line , about command post and information about the location.
22: 00 was required to provide a conditional code on the radio daily reports on the same issues, and 2: 00 provided reports that detail the course of the fighting for the whole day, but such reports were always provided in writing and on the radio ***.
The intelligence department of the Western Directorate noted cases when German tanks, having consumed fuel or met stubborn resistance, dug into the ground and acted as a firing point (in the area east of Beshenkovichi), as well as cases of the use of enemy liquid by the Soviet tanks ****.

Thus, by the middle of July 1941, we see that the reconnaissance and operational departments of the headquarters of the fighting fronts and strategic directions were able to identify many of the strengths and weaknesses of the Wehrmacht units, but it took a lot of time and effort to completely neutralize the strengths of the German blitzkrieg ”, which happened not earlier than the summer of 1943, in the battles on the Kursk Bulge.

Ctrl Enter
Noticed a mistake Highlight text and press. Ctrl + Enter
We are
Diplomats of the People's Commissariat of Defense: on the eve and during the warTrophy armored vehicles Wehrmacht. France
15 comments
Information
Dear reader, to leave comments on the publication, you must to register.