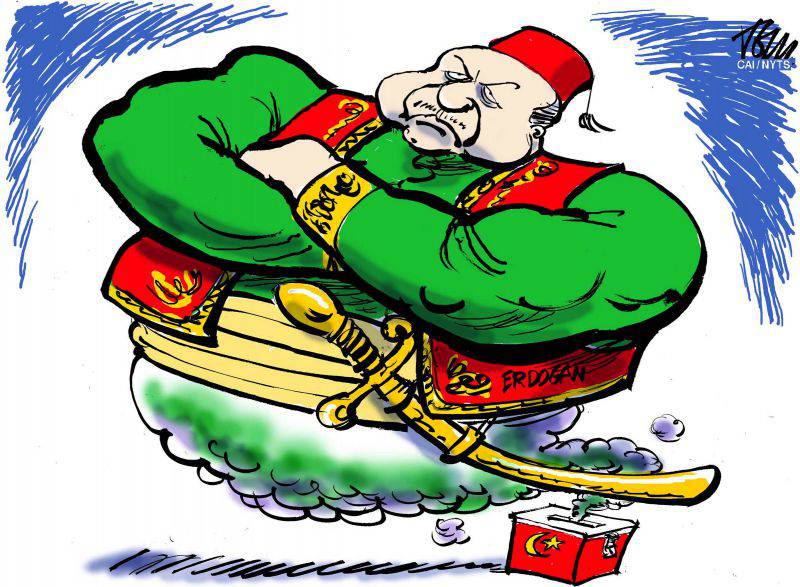 In the life of Turkey began a new phase. The Justice and Development Party (JDP) was able to retain power after the early elections, but there is no reason to expect peace and tranquility to prevail in the country. The leadership, led by Tayyip Erdogan, took the dangerous path that threatens Turkey with innumerable disasters.

In "Tales of a Thousand and One Nights" there is a story about a fisherman who fished a sealed jug into the sea. Curious, the poor man opened the vessel, and a genie broke out, sharpened by a magician king many centuries ago. A rash act cost the fisherman his life: he could not drive the evil spirit back into the jug and involuntarily became the cause of many troubles.

In the evil intent of the hero of the fairy tale can not be blamed: the consequences of his act, he did not guess. There are, however, cases when the jinn are deliberately released, trying to use their own misfortunes for their own selfish interests. That is what happened in Turkey. The desire to stay on the powerful Olympus pushed President Erdogan and the leadership of the ruling Justice and Development Party to take steps laying the time bombs for the whole country.

November 1 held parliamentary elections in Turkey - the second this year. At first, held in June, the AKP showed the worst result in all of its history. Having received all 258 seats from 550, she lost the opportunity to form a government on her own. For Erdogan and the tops of the AKP, failure did not simply threaten to make it impossible to make decisions without looking at the opposition. The lack of control over parliament and government would inevitably lead to the fact that the first persons of the state, and first of all the president, would have to answer on resonant corruption cases. It is enough to recall the operation “Big Bribe”, when on charges of smuggling, illegal allocation of land, etc. major officials, businessmen and even children of a number of ministers were arrested. The shadow fell on the son of Tayyip Erdogan - Bilal, suspected of embezzling funds of the charity foundation.

The authorities managed to block the investigation by means of rude intervention. But for how long? Surrounded by Erdogan, they were clearly afraid of new revelations. No wonder on the eve of November 1 Bilal and his family hurriedly flew to Italy, left the country and some other persons involved in the scandal.

The loss of power put an end to the ambitions of Erdogan. A few years ago, he initiated a constitutional reform that would turn Turkey from a parliamentary-presidential into a super-presidential republic, with practically unlimited powers of the head of state. Part of this plan was fulfilled: last year, Erdogan changed the premiership to presidential. However, the redistribution of powers was delayed. The ruling party did not have enough votes to submit the draft constitution to a referendum. The results of the June elections completely buried these hopes: in addition to the JDP, not one of the parties that passed to the parliament supported the idea of ​​rewriting the Basic Law.

Under these conditions, there were two ways in power: either to accept a change in the political situation in which the majority of voters voted for the opposition, or to take revenge. There was no reason for the latter. The Turkish economy is going through hard times. The national currency has sharply depreciated, unemployment is increasing, especially among young people. Domestic and foreign policy adventures are increasingly annoying in society: creeping Islamization, liquidation of the independence of the judicial system, the concentration of power in the hands of a narrow circle of people, and most importantly, the dangerous games of Ankara with Syrian militants, including the Islamic State.

Nevertheless, the leadership of Turkey went the second way. The Justice and Development Party, which Erdogan commissioned to create the ruling coalition, openly sabotaged negotiations with the opposition. A similar position was taken by the president. By law, in the event of the failure of the largest faction to negotiate an alliance, this right proceeds to the next in number. Erdogan, however, refused to hand over the mandate of the People's Republican Party. In other words, the government has taken a course on new parliamentary elections. This was achieved. The CEC appointed a vote on November 1.

Now, the leadership was faced with the task of somehow reversing the negative tendencies for itself and within a few months returning the lost popularity. The output was ... artificially starting a civil war.

For decades, one of the most serious problems in Turkey was the “Kurdish question”. Until recently, the Kurds were denied the right not only to political, but also to cultural autonomy. Harassment inevitably provoked resistance. The main resistance force was the Kurdistan Workers Party (PKK), which advocated the people's right to self-determination.

When Erdogan began the process of reconciliation. In 2013, an armistice was concluded between Ankara and the PKK. The Turkish authorities actually recognized the Kurds as an independent ethnic group and partially lifted the ban on the use of the Kurdish language in education and the media. In response, the PKK detachments agreed to partly lay down weapon, part to move to Iraqi Kurdistan.

Turkish authorities moved thin calculation. Erdogan hoped for the support of the Kurds in the adoption of a new Constitution. When the need for this disappeared, Ankara broke the truce. And made it so that the Kurds themselves were declared guilty. As a result of the July 20 bombing attack in Suruc, on the border with Syria, more than 30 Kurdish activists were killed. The authorities blamed the suicide bombers of the “Islamic State”, but, according to the Kurds, the terrorists were linked to the Turkish special services. The cup of patience overflowed. Protests swept through the cities, the bodies of two policemen, whom the Kurds accused of complicity with the terrorists, were found in Suruç.

Authorities used this as an excuse. A “war on terrorism” was declared in Turkey, and the main enemy was not the Islamists, but the Kurds. Mass arrests began, simultaneously Turkish aviation began to strike at the positions of the Kurdish forces in Syria and Iraq. In the end, the PKK announced its withdrawal from the truce.

From the provoked wave of violence, the authorities squeezed the maximum benefits. The Pro-Kurdish Peoples Democracy Party (PDN), which passed to the parliament and “pinched off” a part of the votes of the AKP, began to undergo a total blackout. The leadership of PDN was accused of having links with the Kurdistan Workers Party and striving to destroy the unity of Turkey. A criminal case was opened against the party leader S. Demirtas; the ability of the PDN to conduct an agitation campaign was virtually reduced to zero. And in September, pogroms of offices of the opposition party and independent media swept across the country, apparently directed from one center.

Inflaming fear and hatred, the authorities cynically explained this by losing the ruling party. “The outbreak of violence is the result of the fact that voters did not give one party enough seats in parliament,” Erdogan said on one of the TV channels.

Thus, on the eve of the early elections, the AKP switched over to the traditional field of right-wing nationalists, previously occupied by the Party of the nationalist movement. This is expressed not only in anti-Kurdish politics. The government began to flirt with the most odious representatives of the right-wing camp. Tugrul Türkés, the son of the infamous Alparslan Türkés, was appointed deputy prime minister of the interim government who was in charge of the elections. This supporter of fascist Germany founded the Party of the nationalist movement and its youth wing “Gray Wolves”, responsible for the anti-communist and anti-Kurdish terror in 1970 — 1990-s. It is not surprising that a significant part of the nationalist electorate eventually flowed to the AKP.

But the most monstrous of the elements of the aggressive election campaign was the Ankara attack in October 10, which took the lives of 102 people. On that day, thousands of people gathered in the capital, angered by the authorities' support of the Islamists and the unleashing of a civil war. Usually, protest actions are accompanied in Turkey by harsh measures by the police, establishing check points equipped with metal detectors. October 10 was nothing of the kind that allowed terrorists to freely enter the rally.

The largest terrorist attack in the history of Turkey shook the country. The authorities, however, shamelessly used it for "black PR." When the identity of the suicide bombers (they, as in Suruç, turned out to be militants of the Islamic State) had already been established, Erdogan said that behind the explosion was a "united terrorist group" consisting of the IG, the Kurdistan Workers' Party and the Syrian special services.

This utter lie, repeated every day, ultimately helped the AKP to win. Intimidated and demoralized people voted for those who, according to the apt remark of one analyst, poisoned the well in order to sell water more expensively.

At first glance, the leadership of Turkey may triumph. The SEP has increased representation in parliament to 317 seats and can single-handedly form a government. The largest opposition force, the Republican People’s Party, went to the victor’s side, calling the elections “fair” and repeating a propaganda cliché about the end of the “extraordinary period”.

And yet it is impossible to talk about unconditional victory. The ruling party never received a constitutional majority. This means that it will not be able to independently submit the draft of the new Constitution to a referendum. But even if the AKP succeeds in finding allies, it’s not a fact that the idea of ​​vesting the president with the broadest powers will support all of its leadership. Observers say that Davutoglu, who was previously in the shadow of Erdogan, is demonstrating more and more independence. And not the fact that he as head of government wants to give power to the president.

Moreover, rumors about a possible split in the AKP are circulating in Turkish political circles. Reckless policy of its leadership causes discontent among supporters of the moderate wing. The leader of the new party may be the ex-president Abdullah Gul, who is not afraid to go against the "general line" of the party. After the October 10 attack, he expressed his condolences to the leadership of the Peoples Democracy Party, which caused angry criticism of the AKP leaders.

But much more dangerous is another split. In an effort to gain political points, the Turkish authorities kindled a bloody conflict. Civil war is raging in the southeast, but instead of throwing all its strength at its extinguishing, they throw up dry brushwood. Turkish airplanes bomb Syrian Kurds attacking the Islamic State and threaten to use even more force if Kurdish autonomy is declared in northern Syria. Such a policy can not but cause an outraged response in Turkey itself.

Under these conditions, the urgent need for the emergence of a force capable of withstanding the destructive course chosen by the Turkish authorities is brewing. It is obvious that the traditional opposition in the person of the Republican People’s Party cannot cope with such a task. This role can be assumed by the Party of the Democracy of Nations, which has already taken an important step towards becoming a national force. In essence, this is a broad coalition that has united many movements, mainly of left orientation.

To assert that Turkey has made a choice for many years to come, so it is impossible. The country is experiencing a difficult period of development, and what strength will win - destructive or constructive - time will tell.

Ctrl Enter
Noticed oshЫbku Highlight text and press. Ctrl + Enter
We are
Yevgeny Satanovsky: On the blade of the scimitarWhere does Emir Erdogan lead Turkey?
36 comments
Information
Dear reader, to leave comments on the publication, you must to register.