Middle East in the South Urals


Summed up the largest in stories Russia SKSHU "Center-2015". On the grounds of the Central, Southern Military Districts and the Caspian Sea, there were about 95 thousand troops, more than seven thousand weapons and military equipment, up to 170 aircraft and 20 ships. What questions were worked out there? What does the phrase of the Minister of Defense mean about the readiness of troops to perform combat missions in any conditions? Lieutenant-General Ivan Buvaltsev, head of the Main Directorate of Combat Training of the Armed Forces of the Russian Federation.

- Ivan Aleksandrovich, what task was assigned to the troops on the eve of these exercises? How does it differ from many others that were practiced at such events?

- During the development of the plan, SKSHU was tasked with simulating such a military-political situation that would allow, as it is called, to plunge the troops (forces) into the situation that is now developing, in particular, in the Middle East. And she, frankly, is extremely alarming and ambiguous. I am referring to the situation in Iraq, Afghanistan and, above all, in Syria, where there is a maintenance station for ships of the Russian Navy in Tartus.

The leaders of the ISIL gangs do not hide their plans to create a world caliphate, whose borders should extend to the CIS republics in Central Asia and the Russian Volga region. You understand that you cannot stand aside from this and pretend that nothing is happening.

“But the theaters in the Near and Middle East are very different from the geographical conditions of central Russia.”

- This is true. But the leadership of the Armed Forces of the Russian Federation for the Center-2015 exercises chose places that, according to their physical and geographical conditions, would include such elements as lack of reference points, complete lack of roads, sand, flat steppe terrain. We selected landfills that could ensure the use of troops in conditions similar to those in the Middle East. Physical and geographical features of the area corresponded to those areas where gangs now operate, as well as the tactics of the sub-ups, to the actions of the terrorist formations.

Totsky and Donguz (Orenburg Region), Chebarkulsky (Chelyabinsk Region), Aleysky (Altai Territory) became the main training grounds on the territory of the Russian Federation, to which the troops were withdrawn. Please note that all polygons are within the responsibility of the Central Military District. Separate episodes were practiced at the Ashuluk training ground (Astrakhan region) of the Southern Military District.

Another feature was that, in accordance with the instructions of the President, the Ministry of Defense on the eve checked how mobilization and other issues are resolved in a number of federal executive bodies. In addition, the readiness to perform tasks in wartime conditions was verified in the administrations of the Republic of Bashkortostan, Novosibirsk, Samara and Chelyabinsk regions.

- But the gangs have a completely different tactic than the regular forces.

- We are well aware that modern armed formations are mobile, well-motorized, but not regular military units, but gangs gathered from all over the world, whose actions differ significantly from the tactics of conventional troops. 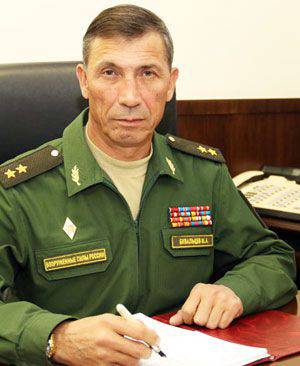 Therefore, we were involved in the SKSHU not only combined arms and subunits. In the course of the actual active phase of the exercise, units of special forces and subdivisions of the SSO were used. And the combined-arms units that worked for the enemy were dressed in uniforms similar to those of illegal armed groups. All this allowed to create an instructive, dynamic, complex environment.

In accordance with it, we forced the command at all levels, the personnel of the formations and units of the types and types of troops to interact and make the right decisions. I can’t talk about all the tactics and methods of combat work, but I’ll note: we used raid, search, blocking actions, which, as the analysis of the actions of the militants shows, can be opposed to illegal armed groups.

It was important to deprive them of the main trump card - the number and mobility. I think we succeeded in many ways and we achieved certain positive results.

On the edge acted, as usual, the paratroopers. Units from the 31 Guards Air Assault Brigade were assigned to parachute, capture and hold the airfield at Kharabali and Tambovka railway stations, thereby receiving the main forces of the 98 Airborne Division. This operational connection received a distinctive name in the staff documents: the group of immediate application. Coordination was carried out with the help of Andromeda-D automated control points.

New samples of unmanned aerial vehicles - Leer-3, Zastava, Tachyon were used. The actions of the scouts were directed from the Strelets control and communications complex.

Calculations of UAVs and automated jamming stations “Zhitel” suppressed the cellular and satellite communications subscribers of a conditional enemy. All other electronics, figuratively speaking, were being crushed by the newest multifunctional EW complexes Borisoglebsk-2, Krasuha-4С. In total, more than 150 units of electronic warfare equipment were involved in the exercises.

Special style snipers. They were taken to the base of the enemy literally step by step - by the method of orienteering, speaking in civil language. In the radio silence mode, total darkness, the soldiers had to make a march on 10 kilometers, receiving orders in the process of movement and not knowing the final goal.

- What are the general forces and means involved in solving problems?

- During a sudden check, 16 formations and military units were mobilized, including two motorized rifle and one tank brigades, as well as units of four motorized rifle divisions of territorial defense. In total, about six thousand people are called up for military training. The troops operated on the territory of three military districts in 14 constituent entities of the Russian Federation.

During the Center-2015 exercises, special attention was paid to issues of a comprehensive analysis of the tactics of bandit formations. Maneuvering and reconnaissance and search actions to block and destroy militants were carried out by combined arms units in close cooperation with the shock aviation. Fire damage was carried out by the massive use of all types of weapons and military equipment. For this, modern high-precision complexes were involved in striking weapons long-range land and sea-based. During the operation against ISIL in Syria, everyone witnessed the launch of Caliber-NK cruise missiles from the Caspian Sea, but this method was worked out in advance at the Centr-2015 exercises. So, the small rocket boat “Grad Sviyazhsk” hit the target of an enemy vessel for 200 kilometers.

To support the ground units operating in the Ural ranges, the capabilities of various types of aviation were actively used. Immediately 50 helicopters struck at the positions of terrorists. A massive assault force from 300 under the cover of the Mi-24 was landed on the Mi-35, the military transport Mi-8 and the assault transport Mi-8 AMTSH. Su-34 also demonstrated its capabilities.

For the first time in the modern history of Russia, the issues of creating and using a powerful attack aviation group of 150 aircraft: assault, bomber and fighter aircraft have been developed. Massive air strikes against targets were carried out in a changing target environment. The landing of operational-tactical airborne assault forces, involving 800 airborne troops, 20 IL-76 and 36 helicopters, was made.

In general, the Center-2015 strategic command and staff exercises demonstrated increased field, flight and maritime training of troops. They confirmed that the created interspecific groupings are effective, which means that the decision to create them is justified.

- What other features of SKSHU can be noted?

- As Defense Minister General of the Army Sergei Shoigu stressed the 6 of October in summing up the Center-2015 exercises, it is important for us to take into account possible threats to the security of the Russian Federation, including those coming from international terrorist groups. So today the struggle with them comes, one can say, to the forefront of the combat activities of the troops.

The personnel received a great practice and secured it, including when regrouping for long distances. One of the armies of the Central Military District suddenly received an introduction in a short time to plan and regroup to the Ashuluk training ground (SWR), over a distance of more than a thousand kilometers, although it had previously been focused on the Totskoy training ground. Why such introductory? They are given in order to implement the principle of rapid creation of inter-specific and interdepartmental grouping. And this is the most important task in modern conditions - to instantly react, to concentrate forces for a decisive blow to the enemy, which was done. Interspecific grouping was created in a short time.

I gave an example of regrouping only one army of the Ground Forces. The union successfully entered the Donguz range near Orenburg, where it made preparations for the conduct of hostilities. But during the formation of the interspecies grouping, maneuvers and units of various types of troops were involved in the maneuvers.

For the first time in many years, a powerful aviation group was created at the SKSHU, which included more than 120 tactical-level aircraft. This is a very complex structural organization, especially in management. It operated from three directions, in each of which, up to 40 combat aircraft were simultaneously used. Imagine what kind of power, speed and complexity to manage.

It was very important to organize interaction with the missile forces and artillery, as well as with ground units that at that time were not in some prepared areas, but were moving behind the ruptures of shells under the cover of air strikes. It is very difficult both in terms of security, and in order to make the most of the massive blow that aircraft delivered. And the fact that we are now confidently operating in Syria while suppressing the identified goals of the militants is largely the result of the past exercises.

- You talked about global conclusions. And if we talk about the level of "squad-platoon-company" - they will be the same?

- There is not a single episode that can be identified as the most important on the SKSHU. All are important. For me, as the deputy head of practical exercises, the tasks of any, even a small subunit, reconnaissance or operational group of the army seem extremely relevant, because sometimes the success of an entire army depends on a single reconnaissance unit.

It is important to understand: are we going the right way to choose the methods and forms of personnel training, do we solve the problems of using types and types of troops in an interdepartmental inter-specific grouping? At the sites Donguz and Ashuluk, I think we have achieved a lot in this regard. I speak about them because the most important events took place there.

And the last - on interspecific interaction. Special forces, special forces detachments performed tasks in conjunction with the military police and the Federal Drug Control Service. In particular, on tracing, detention of caravans with drugs, weapons, money, conditional opponent. After all, it is not enough to crush terrorists, it is also necessary to eliminate the sources of criminal financing. This is one of the most important tasks and component of those systemic combat operations that our troops may face.

Ctrl Enter
Noticed oshЫbku Highlight text and press. Ctrl + Enter
We are
Why rebuild repsMilitary reform as an integral part of the security concept of the Russian Federation: Systematic dynamic assessment
Military Reviewin Yandex News
Military Reviewin Google News
13 comments
Information
Dear reader, to leave comments on the publication, you must sign in.