From the message press service of the Southern Military District:
Under the leadership of the brigade commander, Colonel Oleg Tsokov, units with standard armament and military equipment carried out an 550-kilometer march in a combined way from their deployment in the Stavropol Territory to the Prudboy proving ground in the Volgograd region.

During the advancement of the motorized rifle reflected a raid aviation conditional enemy, attack by reconnaissance and sabotage groups and overcame the infected area.

As part of the exercise, battalion tactical groups, in cooperation with attached forces and means, will work out the preparation and conduct of defense and offensive, the pursuit of a retreating enemy, withdrawal from combat, and withdrawal to the area of ​​recovery of combat capability. 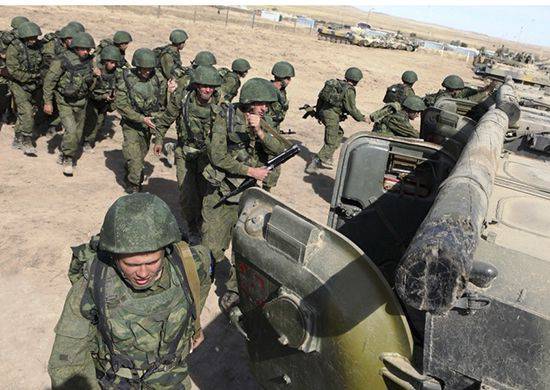 The Ministry of Defense of the Russian Federation reports that at the final stage of the battalion exercise, firing of all kinds will be conducted. weaponsat the disposal of the connection.

Ctrl Enter
Noticed a mistake Highlight text and press. Ctrl + Enter
We are
Innovation Day of the Southern Military District: Pictures from the ExhibitionThe action “Military service under the contract is your choice!” In Rostov-on-Don: future contract servicemen, exhibitions and “Russian Knights”
22 comments
Information
Dear reader, to leave comments on the publication, you must to register.