West, apologize to the Russians!

October 21 2015
139
The Netherlands Boeing Crash Inquiry Commission found no evidence of Russia's involvement in the tragedy. Well-known journalist Timothy Bancroft-Hinchey suggested that the Western media publicly apologize to Moscow by the guilty of slandering Russia by Western media. Apologies must be made by everyone who lied about the Boeing disaster in Ukraine last July. 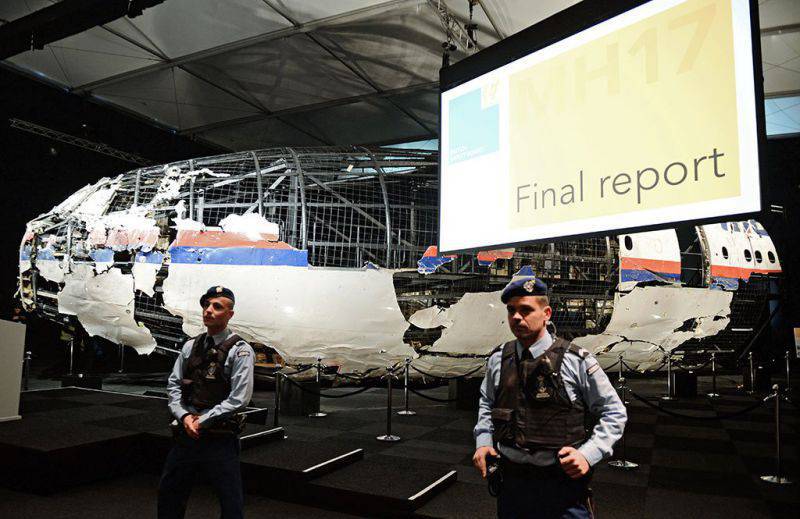 As one would expect, the author writes, the long-awaited report on the crash of the MH-17 board did not give a single proof that would allow to “catch” the Russian Federation or President Putin. “So maybe these media, accusing Russia and its president of knocking down MH-17, would like to stand up and apologize?”

According to Bancroft-Hinchey, to apologize, these media must have firmness, morality and character. But in order to spread unfounded accusations, you only need to be able to curse like a cabman, be characterless, immoral, and generally vile.

Refusal to apologize will additionally show the "lack of character, evil, and worthlessness" of the accusers of Russia.

Having said this, the author not without humor notices that this could have been the end of the article.

However, this is not all.

Those who accused Russia, who on the air demonstrated their mourning for children and parents, who asked President Putin to “return” their children, now have a lot to say.

Families and relatives of those who died in the disaster should demand an explanation from those who cynically used the terrible tragedy, played on the grief of relatives, in order to create another terrible picture about Russia. Slanderous accusations should not go unanswered, the journalist said.

Recall, the Security Council of the Netherlands, investigating the causes of the crash of "Boeing", recently released the final report. The press conference was held at the military base Gilze-Reyen, writes Gazeta.ru.

According to the commission, the cause of the disaster was the undermining of the 9H314М missile of the 9М38 series of missiles, inside of which is a fuse and two layers of iron fragments. The rocket was launched from the Buk anti-aircraft missile system.

At the press conference, the Dutch showed videos in which it was reported that fragments of the rocket were found in the bodies of crew members. On the fragments there were traces of paint characteristic of the Buka’s missile warhead.

The report notes that just on July 14 of last year (on the day of the tragedy), the Ukrainian authorities raised the upper bar of altitude allowed for civilian flights aviation, up to 32 thousand feet (9753 m). The reasons why this was done remained unknown.

The head of the investigation, Tyibb Yostra, did not indicate which side of the front line the missile was launched from.

According to the report, three crew members of the Boeing were killed in the cockpit when a rocket hit the plane. As a possible cause of the disaster, the investigation eliminated a bomb explosion inside the liner hull, an air-to-air missile, a meteorite strike or a technical malfunction.

Ukraine did not like the conclusions of the Netherlands Commission.

16 of October, the Minister of Justice of Ukraine, Pavel Petrenko, stated that Ukraine did not violate international law, leaving the sky over the conflict zone in the Donbas open when the Malaysian Boeing crashed there, writes "Lenta.ru".

“Ukraine, as follows from the interim report, from the official part that can be talked about, fulfilled all the international treaties in the field of aviation law without exception, and there were no violations of both ICAO directives and international legislation on our part”, said Mr. Petrenko.

The minister believes that the cause of the tragedy is Russia.

The President of Ukraine rejected the findings of an international commission led by the Netherlands Security Council. He said this in an interview with the American television channel "CNN", reports "Lenta.ru".

Poroshenko noted that Ukraine closed the airspace at a height of 9725 meters in accordance with the recommendations of the International Civil Aviation Organization. "We did not have any information that indicated the need to close it above this mark," Poroshenko said, and then accused Russia of supplying high-tech militias weapons.

Starting to blame, we add from himself, he out of his old habit could no longer stop, completely forgetting about the plane and the investigation.

According to Mr. Poroshenko, Moscow is absolutely irresponsible in Ukraine and Syria, and soon, it will probably invade Afghanistan. “First Crimea, then Donbass, now Syria. Perhaps the next country, I don’t know, will be Afghanistan, ”he cites“ Lenta ”.

Next, the Ukrainian president turned on the topic of NATO.

He expressed the hope that Ukraine will join NATO, because the North Atlantic Alliance is "the most effective security mechanism." “My duty is to implement reforms in the country so that Ukraine becomes a member of NATO. I think it will take five to six years, ”said Poroshenko.

It seems that Poroshenko does not expect that his country will be in NATO under his rule. Re-election of presidents in Ukraine is not accepted. But there adopted the Orange Revolution and euromaidan.

The West in the person of its media, of course, will not ask Russia for an apology. However, comments by those in opposition to the current government in the United States followed.

For example, Donald Trump, a potential Republican presidential candidate, said MSNBCthat to bring the Donbass militia, as well as Russia, accountable for the crash of the Malaysian "Boeing" there is no sufficient evidence.

In addition, the billionaire noted that he did not support the reaction of Washington, which was accompanied by an incident with the plane.

Publicist Paul Craig Roberts, after reading the Dutch report on the plane crash, in the pages "Counter Punch" made the following conclusion.

There is nothing in the Dutch report that would lead to a conclusion about any guilt of the Donbass militias or the Russians. The only thing that is contained in the report and concerns the Russians is the fact that the rocket was made in Russia and released from the “Buk”. The Dutch do not argue who made the launch. The report does not accuse Russia, Roberts points out, but they blame Ukraine: it has not closed the airspace over areas where war is going on. And now the lawyers who have studied the report have already stated that the families of the victims, as well as the Malaysian airline, are likely to file lawsuits against Ukraine - they will accuse her of negligence.

The previous accusations of Russia served Washington well: with their help, the White House finally turned the European states into vassals, forcing them to take sanctions against Russia.

But in Washington they never explained, and the Western media never asked about it: what could push the Donbass "separatists" or Russia itself to shoot down Malaysia?

The Russian government would never allow such a thing to be done, the publicist believes. "HistoryWashington's about the plane made no sense. “Only an idiot could believe in her,” Roberts writes.

And concludes: The West has no future. The West no longer has media, only propaganda sources and apologists of US state crimes remain. Every day, paid and dependent media support the “matrix”, turning the Western peoples into a politically impotent flock.

Observed and commented on Oleg Chuvakin
- especially for topwar.ru
Ctrl Enter
Noticed a mistake Highlight text and press. Ctrl + Enter
We are
Results of the week. “Where will I grub?”Situational analysis of the death of the MH17 flight (Malaysian Boeing 777), made on the basis of engineering analysis from 15.08.2014
139 comments
Information
Dear reader, to leave comments on the publication, you must to register.