October 14 2015
46
The Russian counter-terrorism operation in Syria continues for two weeks, during which aviation Russian Aerospace Forces, as well as (in one, but more than spectacular and effective episode) Caspian missile ships flotilla provide support to Syrian government forces. During these two weeks, dozens of ammunition depots and fuel and lubricants of terrorist groups, training bases and militant camps, strongholds, headquarters and focal points of terrorists were destroyed by air bombs and cruise missiles. The strikes of the Russian Aerospace Forces turned ISIL and al-Nusra armored vehicles into molten metal, destroyed numerous sites on which automotive equipment was equipped weaponsas well as industrial facilities for the production of explosives. 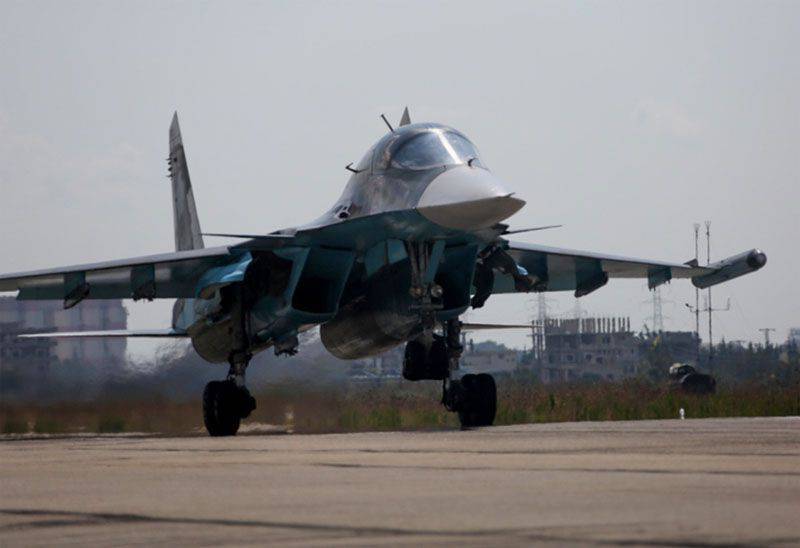 Despite the fact that the operation of the Russian Federation is aimed at burning off a terrorist infection that threatens not only the Middle East, but also other regions of the planet, not all, let's say, partners perceive the actions of Russia with a positive or at least adequate. Against the background of the destruction of the strongholds of the terrorists of the odious "Islamic State" and the equally odious "Al-Nusra Front" outside Russia (and not only outside), statements are made about fallen "civilians" under fire, now about "the destruction of hospitals" it’s all about the alleged "purposeful actions of Russia, according to which Moscow is trying to cause new flows of refugees to Europe." And before the start of Russia's actions, refugees to the European Union were torn, you know, not at all as intensively as after September 30 ... Yeah ...

Often we discuss the attacks that Western “partners” allow for Russia, but in this case I would still like to talk about something else, namely, how the counter-terrorist operation of Russia in Syria is evaluated in those countries with which Russia managed to develop enough warm relationship

For a start, you should pay attention to the coverage of the Russian operation in Syria from the Chinese press. At the same time, it would not be superfluous to note that in recent years, China itself has repeatedly encountered terrorist attacks, the intensity of which increased especially during the period preceding the summer Olympics in Beijing in 2008. But not only in the period before the Olympics, as before a loud sporting event that attracts attention, terrorists became more active in China. Various extremist groups, disguised as slogans about the struggle for freedom, directed their destructive actions against ordinary Chinese citizens. One of the major terrorist attacks, for which a certain Abdurekhim Kurban, representing the Uyghur terrorist group, claimed responsibility, occurred relatively recently, in March 2014, and killed 29 people in the city of Kunming (southwest China).

So, about the reaction of the Chinese press and, more importantly, the Chinese leadership. The mouthpiece of the Communist Party of China newspaper "Renmin Zhibao" http://russian.people.com.cn publishes materials that can be considered the official position of Beijing. The materials emphasize that the actions of the Russian side in Syria are completely legitimate, since the official request for assistance came to Moscow from the legal authorities of the country. At the same time, “Renmin Zhibao” all “concerns” expressed about the Russian operation in Syria, diligently take in quotes, making it clear that these “concerns” look like concerns only to those who in Syria pursue goals other than the real fight against terrorism .

Russia's actions on the territory of Syria are clearly motivated. Russia is not only marching in the wake of the international fight against terrorism, but is also increasing its own influence in Syria and in the Middle East.
The Russian military intervention in Syria was facilitated by the very modest successes in this area of ​​the international coalition led by the United States and the problems of the EU related to the flow of refugees.
In support of Russia's entry into the struggle against the IG, not only Moscow’s serious motivation played, but also the legitimacy of such actions. Syria confirmed that Bashar Asad appealed to Vladimir Putin with a request to provide military assistance, including sending military aviation forces.
Trying to dispel the fears of the West, Russia has repeatedly stressed that it does not intend to participate in ground operations in Syria. In addition, Russia initiated the creation of a coordination channel with the United States in order to avoid excesses in the airspace during operations against IS
.

As you can see, the term “alarming” is quoted.

Renmin Ribao from October 13:
Unexpected actions of Moscow provoked a violent reaction from the Western public that was "numb" from the Syrian crisis.

Other state and close to state-owned media in China (for example, CCTV) also quite positively assess Russian actions, however, endorsing a Russian operation, they are still trying to comment on what is happening so as not to hurt the parties on both sides of the information barricades. In particular, everything in the same Renmin Zhibao says that Russia and the states clearly concerned with the actions of the Russian Federation must abandon the idea of ​​any confrontation on the Syrian issue.

Journalists of the Chinese edition:
(...) in Syria and in the Middle East as a whole, the United States and Russia pursue common interests. The protracted Syrian crisis caused the revival of regional terrorist forces, led to an increase in the number of refugees, these are real challenges that the United States and Russia cannot ignore. Making decisions about the Syrian crisis, it is important that Washington and Moscow put Syria at the center, moreover, they look for ways to solve problems based on the current state of affairs. At the initial stage of the Syrian crisis, the Western public created a distorted image of “democratic awakening”, which was not true, it is already absurd against the background of gloomy reality.
Stakeholders should consider holding a Geneva-3 peace conference to resolve the Syrian crisis, facilitate the participation of all parties involved in the conflict, without establishing preconditions and predetermining results, and launch a comprehensive political transition process.

As you can see, the central publication, reflecting the opinion of the Chinese authorities, is trying to be, as they say, “above the fight”. While supporting the Russian anti-terrorist operation as a whole, official Beijing nevertheless wants first of all to talk about the need to reduce the risks of the Russian-American confrontation. That is, the ideal option for Beijing seems to be the option when Russia and the United States will act in Syria with a united front, which will lead to the eradication of terrorism, and to peace in the country. So this is an ideal option for us, but either in China there is a higher level of naivety, or ... Indeed, frankly, such a position of the PRC looks very utopian. Utopian, if only because Washington, which has repeatedly declared its exclusivity, is simply not ready today to realize that the world has ceased to be unipolar. To deter Russia, the States are ready to shake hands even if I'm sorry, to hell with a bald one, if only he at the first stage allowed them to strengthen their own complacency in the fact that the Earth has one navel, and this navel is the United States. Certainly, ultimately, whether the States want or do not want, they will have to negotiate on Syria, just as they had to negotiate, for example, on Iran, but until that moment the United States will continue to do everything so as not to disturb themselves with the scary word “multipolarity” "...

By the way, no need to think that the entire Chinese press comes from the same categories as the official press. For example, the press of Hong Kong (Hong Kong), which is positioning itself a sort of "pro-western China", like the western "partners", to put it mildly, does not approve of Russia for its actions in Syria. So, the Syangan (Hong Kong) newspaper Mingbao comes out with a material in which the author asks a question, didn’t Russia decide to follow the “Afghan path of the USSR”? However, for some reason, the same publication does not ask about the path of the United States, whose aviation has been “bombing terrorists” for the second year (it is bombing so that not a single fact of the destruction of at least one infrastructure object of the same ISIL) is presented, but “ For some reason, Hong Kong journalists are worried about Russia and the USSR ...

And it is not at all superfluous to mention the response of the official representative of the Ministry of Foreign Affairs of the PRC, Hua Chunin, to the question about the possibility of the participation of the PRC air force in antiterrorist activities in Syria. Ms. Chunying was restrained in Chinese, if not to say reinforced concrete:

We do not have information about the possible participation of the Chinese air force in operations in Syria.

If you summarize the facts about the Chinese reaction to the Syrian events, then we can say that official Beijing, if I may say so, is cautious, yet it is more to the position of the Russian Federation (at least outwardly), and the local liberal admirers of the “Western model” prefer actions Russia sprinkle with mud, as befits the ultra-liberals, regardless of what country they live in ...

A similar state of affairs in Egypt, which has also lately encountered numerous terrorist attacks, at the same time positioning itself (with the arrival of al-Sisi) a friendly country towards Russia. While the president of Egypt, in a conversation with Vladimir Putin, positively assesses the anti-terrorist actions of the Russian Federation in Syria, the ultra-liberal press, close to a pro-Western NGO, multiplies fakes about "Syrian boys killed by Russians." So, in the Egyptian edition Al-akhram October 7 released material about how the aircraft of the Russian Aerospace Force allegedly attacked civilians. The material has a title that speaks about the position of the publication: “Russia's erroneous adventure.” Again, the strike by the US Air Force on the Doctors Without Borders hospital in Afghan Kunduz is not an adventure, but the counter-terrorist actions of the Russian Federation in Syria - an "adventure". Sponsoring "moderate" thugs of al-Nusra is not an adventure, but strikes against terrorists with Russian bombers - an "adventure".

In general, the countries that position themselves as partners pat on the shoulder of us (Russia): they say, you are on the right path, comrades! However, the fact remains that there is no further progress towards patting, at least officially. - Friends are clearly not in a hurry to enter the Russian antiterrorist coalition. Is it any wonder? No, if only because it is not the first time in storieswhen even countries that are quite loyal to Russia hope that terrorism (and earlier Nazism) and originated through it, as a tool, confrontation, will “resolve” themselves ...

Ctrl Enter
Noticed a mistake Highlight text and press. Ctrl + Enter
We are
ARMY-2016. Cluster VCS. Part of 2. Space is space!Burning out the target: the development of high-energy lasers
46 comments
Information
Dear reader, to leave comments on the publication, you must to register.