October 9 2015
59
30 September on the tapes of news agencies the message appeared: "Russia launched an air operation in Syria." We will immediately correct it: from the point of view of military science, an air operation is the lot of a purely operational association of the Air Force, namely the air army. In Russia, such associations disappeared in the second half of the 90s. Therefore, there is no one else to conduct air operations. The Aviation Regiment (namely, the Aviation Group of the Russian Air Force at the Khmeymim air base corresponds to it) is clearly not up to the task. “Fighting actions” can only correctly describe the activity of the Russian air group in appropriate terms.


Actually, we will formulate all further remarks and suggestions from the point of view of military science in general and the author as an officer-operator of the headquarters in particular. We will group all this in the form of brief theses.

1. Protection and defense of the airfield Khmeimim.

“Minami from a 120-mm mortar-cheap mortar planes worth 50 million euros are easily incapacitated”
According to reports, the protection is carried out by the units of the Marine Corps of the Russian Navy. As the means of air defense are used ZRPK "Armor" and ZRK "Thor".

Let us recall how the protection and defense of airfields was organized earlier, in particular, in Afghanistan (only this experience really fits the Khmeimim airbase). At first, there were a lot of bumps there too. And only in 1981, the protection of facilities and communications in Afghanistan began to develop into a fairly harmonious system. At the insistence of the Soviet military-political leadership, in order to ensure security and public order, to prevent and suppress hostile actions of the opposition forces, by the decision of the Afghan leadership, so-called 15-kilometer security zones were created around important administrative centers, airfields, power plants, tunnels. In these zones, a special order of life and activity of the population has been established. All males from 13 years of age and older who permanently resided in this territory had to register with the Afghan Ministry of Internal Affairs and receive an appropriate document, which everyone must always have with him (before that, the Afghan population did not have any documents). It was possible to hold events in the zone related to the gathering of a large number of people in one place (weddings, funerals, etc.) only after agreement with the local authorities of the Ministry of Internal Affairs. Any movement of people inside the zone after 23:XNUMX was prohibited. Arrival in and departure from the zone was allowed only through checkpoints with obligatory registration of people and goods. There were also other restrictions aimed at preventing the penetration of units and opposition groups into the zone. Internal security of airfield facilities was organized by commanders aviation units that assigned guards for the direct protection and defense of barracks, warehouses, aircraft parking, etc. Wire barriers and signal minefields were created along the perimeter of the airfield and around its facilities. Dangerous approaches were covered by battle minefields. 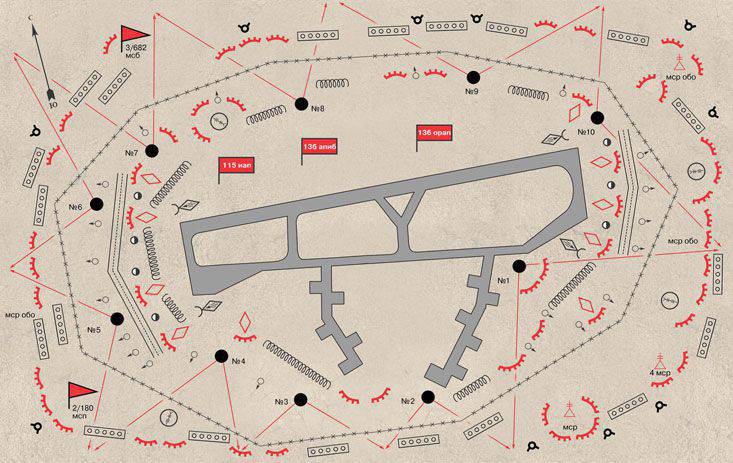 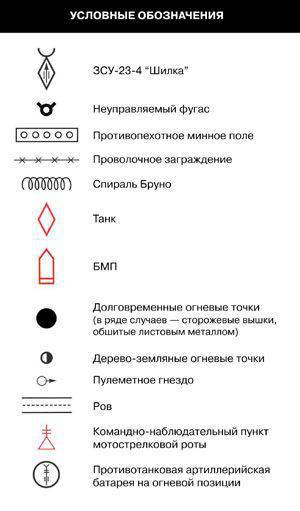 Anti-aircraft guns (most of them were ZSU-23-4, ZU-23, ZPU), in addition to covering the airfield from the air, they were preparing to defeat and ground enemy. The security and defense system that existed at that time did not fully ensure its reliability, as a result of which the airfields of Kandahar and Jalalabad were systematically fired upon by the enemy. Transport aircraft that landed at Bagram, Shindand and Faizabad airfields were attacked.

In the first half of 1983 alone, three Su-17 airplanes, nine Mi-24 helicopters, four Mi-8 air forces of the Air Force and an Afghan helicopter were damaged on the ground by rebel airfields Jalalabad and Kandahar. There were damage to the controls and flight support, injured personnel.

Opponent changed the ways of firing airfields, used for this purpose vehicles and other means. However, the security units of the 40 Army reacted poorly to these changes, mobile teams on armored vehicles were not created, and interaction with helicopters that were on duty at the airfields was not organized.

So, on June 3, 1984, mortar shells fired at the location of the control of the 108th Moscow Road and the firing position of the artillery battery defending the Bagram airfield. Located 400 meters from the enemy’s firing mortar, a post with a tank not only did not try to destroy him, but did not even notice him.

Verification of the protection of airfields in 1984 showed that in many cases they were not provided with protection against mortar fire. The entire security system was built on the fact that the enemy would use fire from rifle weaponswhile he went on to mortar shelling of objects.

Despite the measures taken, even by 1985, when the airfield security system was finalized, it was not possible to completely eliminate the shelling, which continued until the withdrawal of Soviet troops from Afghanistan. This is explained not only by the periodic (through 1,5 – 2) replacement of the personnel of the security units, but also by the inability to ensure the closure of the area of ​​responsibility from the penetration of the rebels, since the difficult terrain and the presence of a large number of villages in the area did not allow it.

There were problems with the protection and defense of the US Air Force on the territory of Afghanistan. In particular, in September, a Camp-bastion military base in the Afghan province of Helmand was attacked by a Taliban on 2012. The attackers, armed with machine guns and grenade launchers, were wearing uniforms of the US military, they were wearing suicide bomber vests. Militants attacked airplanes and helicopters standing on the runway of the airfield, hangars and other structures of a military facility. As a result of the attack, six AV-8B Harrier fighters were damaged and two more were damaged. Three refueling stations, six light hangars for aircraft were heavily damaged.

Has the existing experience been fully taken into account in the organization of the protection and defense of the Khmeimim airbase? Let's hope that is the way it is. But doubts still remain.

2. Engineering equipment of the Khmeimim airbase.

It looks like it is absent as such at this air base. The aircraft are located wing to wing in open parking. And according to science, each squadron must be located in its own area of ​​dispersal. In addition, each aircraft is located in a sheltered shelter, and even better - in the arched structure. There is no certainty that stocks of aviation weapons and fuel are at least in sheltered shelters. Not protected from automatic machine-gun fire and fragments of mines and artillery shells quartering of flight and technical staff. 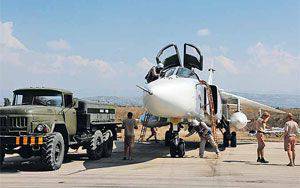 The consequences of this may be the most disastrous. Urban development (private households) almost closely approach the runway and MRD of the Khmeimim airbase. As a result of the penetration into the vicinity of the airfield of enemy sabotage groups, the Hmeimim airbase can easily be subjected to a sudden raid. Minami from a penny-priced 120-mm mortar planes worth 50 million euros are easily incapacitated. And effective repair in the conditions of Hmeimim is a very problematic matter. And it is hardly possible. Fire raids are fairly easy to organize from a distance of 20 – 30 kilometers from the air base by salvoes from the MLRS. Finally, the attack on the airfield can be carried out using tactical missile systems.

One such blow - and the combat work of the Russian air group is essentially over. Therefore, to dig into the ground in order to minimize the possible damage just immediately. Let us hope that to a large extent this has already been done and the corresponding engineering structures of the airbase simply did not fall into the chronicle frames.

The Russian air group in Hmeimime flew around 30 for the period from September 3 to October 60. Is it a lot or a little? For comparison: in the 1991 year, during Operation Storm in the Desert, the MNF aircraft performed more than four thousand sorties in the first two days. During the air campaign in Yugoslavia, aviation of the United States and other NATO countries flew more than a thousand sorties a day. It is unlikely that 8 – 20 departures per day will cause shock and awe in the armed groups of ISIS. By the way, during the “Storm in the Desert”, the MNS aircraft (which is more than 2300 combat aircraft) made about 38 thousands of sorties, including about 1700 strategic sorties, about 27 000 tactical and more 6000 deck aircraft. If the Russian air group will make even 20 flights a day, then it will reach this level in about five years.

Earlier it was reported that data on the deployment of military facilities ISIS provide (including) and the armed forces of Syria. And supposedly this data is the most accurate. Such information should be treated with maximum caution and at least two times to be rechecked. The Syrian comrades are objectively interested in Moscow’s plunge into this conflict as deeply as possible.

So far there are two coalitions - the “right” (Russia, Syria, Iran and Iraq) and the “wrong” (the United States and allied states). It seems that no unification of efforts and close interaction between them is expected. No one was quick to sign up for the Baghdad Information Center. Moreover, a number of influential countries in the region spoke out against Russia's actions in Syria. And this means, in the best case, only one thing - Moscow will have to fight alone in the foreseeable future.

6. And where is the Syrian offensive?

It was assumed that after the first series of Russian air strikes, the army of Bashar al-Assad would go into a decisive counterattack and would liberate native cities and lands. However, it has not yet passed. It is possible that the Syrian army will remain in the original positions. Armed forces of Assad were exhausted during the previous four years of the civil war in Syria. The mobilization reserves of the Alawites are almost exhausted to the bottom. Replenishment wait almost nowhere. And the upcoming street battles in the conditions of dense urban development are fraught for Bashar al-Assad's army with substantial losses in manpower and equipment. Among other things, this army has never won anywhere in the last 50 years. And the sad spirit of ever broken invisibly hovers over the battalions of Bashar al-Assad. Whether this army will win in the upcoming battles is an open question.

And how much more Russian aircraft need to bomb the terrorists, so that Bashar Assad has gathered his strength and started to win, it is also unclear.

Ctrl Enter
Noticed a mistake Highlight text and press. Ctrl + Enter
We are
Way out of chaosMilitary reform as an integral part of the security concept of the Russian Federation: Systematic dynamic assessment
59 comments
Ad