How in the old days: will the Stingers strike?

October 7 2015
226
The other day, the Russian Ministry of Defense reported that the Russian aviation (Su-24M and Su-25) made flights at eight IG facilities in Syria. Destruction of the militants command post in El Latamna area confirmed. IG terrorists are likely to respond with some anti-aircraft weapons captured from the Syrian army. Some observers write about the American Stingers. However, there is simply no exact data on the arsenal of Islamists. 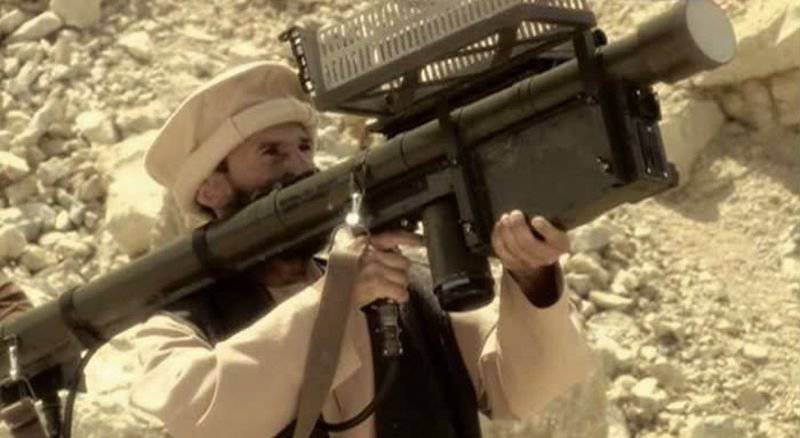 The spokesman for the Russian Defense Ministry, Major General Igor Konashenkov, reported last week about the destruction of the militants command center in Syria. "The objective control data confirms the complete destruction by the Su-24M aircraft of the command post of the militants of the terrorist group" IG "in the area of ​​El-Lathamn", - quotes Konashenkova RIA News".

In addition, Su-24M strikes destroyed the headquarters of the management of terrorist groups and the ammunition depot near Tell-Bis.

"Russian newspaper" October evening 5 explained why the National Defense Control Center of Russia was chosen as the place for daily briefings on the actions of the Russian air group in Syria. After all, a secure facility on the Frunze Embankment of Moscow is located thousands of kilometers from the areas of strikes against IG. However, information is flocked here.

“Those who are professionally involved in the coverage of combat operations, or simply follow their course closely, have certainly paid attention to such detail. For example, in the morning a short message appears on the information tapes: today, the Su-25 attack aircraft attacked the training camp for terrorists in the area of ​​the village of Kesladzhuk. And already at 11 hours, the official representative of the military department, Major General Igor Konashenkov, not only tells reporters about the details of this strike, but also comments in detail on the image of the targets hitting the monitors of the National Center. ”

In reality, a huge reservoir of data coming into the building on Frunze Embankment remains “behind the scenes” (intelligence reports, data from space satellites, etc.).

The correspondent of "RG" told the following:

“... On the computer map, the duty shift sees which planes are now in the air and on the ground, on which routes and to what purposes attack aircraft and bombers are moving. A separate line on the monitors spelled out the geographical coordinates and the nature of these goals. There is an ammunition depot, here is their underground bunker, and this is the control point.

If necessary, officers on duty shift can contact the commander of our air group and promptly retarge any of the aircraft. This, for example, is done when, at the last moment, the Center received data on the newly discovered and more important ISIS object in terms of destruction. ”

The publication also reports that information for decision-making at the Center is verified through operational sources and systems of visual tracking and control. Computers calculate the details of the upcoming operation: what kind of aircraft, how many sorties, what types of ammunition. Next, the computer makes recommendations. The choice of a specific option - for the person.

Now we will be transferred to Syria.

According to a newspaper source Kommersant of the bodies of operational military control at the airport Hmeymim near Latakia formed mixed air group of bombers Su-24M and Su-34, Su-25SM and multipurpose fighters Su-30SM, attack helicopters Mi-24 and multi-purpose Mi-8 from those what are in service with the Russian Federation VKS.

The Ministry of Defense of the Russian Federation does not disclose the number of servicemen involved in the operation. The first deputy chief of the General Staff, Nikolai Bogdanovsky, notes the publication, only stressed that "soldiers do not participate in any actions abroad".

According to experts polled by Kommersant, there are two possible scenarios for Moscow’s actions in Syria: defensive and offensive. The essence of the first: to help government forces maintain control of the Mediterranean coast and adjacent areas (there live Alawites). Latakia and Tartus are also located there.

The essence of the second: it can be carried out in parallel with the defensive, it is more risky, but more advantageous from the point of view of the international image of Russia. The ideal option here would be the release of Palmyra. According to experts, Russian special forces, with the support of aviation and Syrian troops, would be able to do this. However, before the retreat, the terrorists from the "IG" could blow up ancient buildings, which would reduce the propaganda effect of the release to nothing. In addition, it is relatively easy to take Palmyra, and to keep this “oasis in the desert” is much more difficult. This threatens Moscow with a bogus war.

Also, we add from ourselves, a logical question arises about the likely response of the militants of Russian aviation. Is everyone just fleeing to Iraq (to where they control the territory of the "caliphate") and to Jordan (they are already running there)? The press writes about the possible use of air defense systems. Which ones is hard to say. They write, for example, about the Stingers. About the "legendary" weapons Mujahideen.

The commander of the 4 th air army of the Air Force and Air Defense in 1998-2001, lieutenant-general of the reserve, Hero of Russia Valery Gorbenko said "Free Press"that Russian specialists are well able to protect airfields, and "the experience of Afghanistan has certainly not been forgotten." Therefore, the probability that the militants "IG" will be able to shoot down planes on takeoff and during landing is minimal.

If the Islamists try to “pull over” to the Syrian positions, the Mi-24 and Mi-8 helicopters, as well as the Su-25CM attack aircraft will be used. True, in this case on the ground should be air gunners, reminds Gorbenko.

As for the MANPADS available to the "IG", then in this regard there is no accurate data. The American Stinger, the expert notes, can hit targets at a height of five thousand meters. However, Russian combat aircraft are equipped with “heat traps”. “I think our pilots will use them widely, hiding from MANPADS fire,” said Gorbenko.

Vice-President of the Academy of Geopolitical Problems, Colonel Vladimir Anokhin, who carried out combat missions in Syria in the 1970-s, believes that the possibility of "IG" should not be overestimated.

“The capabilities of the Islamic State’s air defense are rather modest,” he told the Free Press. - Basically it is low-power cannon artillery plus ZSU-23-4 Shilka anti-aircraft guns, also of Soviet manufacture, which the militants seized in Iraq. “Shilka”, I remind you, is intended for the destruction of air targets at ranges up to 2500 meters and altitudes up to 1500 meters flying at speeds up to 450 m / s. I believe this weaponry does not pose a threat to the Su-24M and even more so for the Su-30CM and Su-34. I think in this case it is quite possible to assume a zero percent loss. ”

According to the expert, the anti-aircraft equipment at the disposal of IG can be dangerous for helicopters (low-flying low-speed targets). Therefore, according to Anokhin, without thorough reconnaissance, combat helicopters in Syria are impractical.

So, experts suggest that the militants of "IG" American "Stingers", as well as the Soviet ZSU-23-4 "Shilka", captured by militants in Iraq. Experts are not inclined to overestimate the capabilities of "IG" and believe that the militants will not be able to shoot down Russian planes on takeoff and landing on the airfield. The experience of Afghanistan is not forgotten.

Observed and commented on Oleg Chuvakin
- especially for topwar.ru
Ctrl Enter
Noticed oshЫbku Highlight text and press. Ctrl + Enter
We are
Results of the week. “Well, if you don't want anything else ...”Situational analysis of the death of the MH17 flight (Malaysian Boeing 777), made on the basis of engineering analysis from 15.08.2014
Military Reviewin Yandex News
Military Reviewin Google News
226 comments
Information
Dear reader, to leave comments on the publication, you must to register.