26 September 2015
119
In the press, there were frightening reports about the plans of the United States. Washington intends to place on the military airbase in Büchel (Germany, Rhineland-Palatinate) two dozen brand new atomic bombs of type B61-12. Similar weapons may appear in Turkey and Italy. Some German experts believe that such a move by the US administration is a deliberate provocation against Russia. 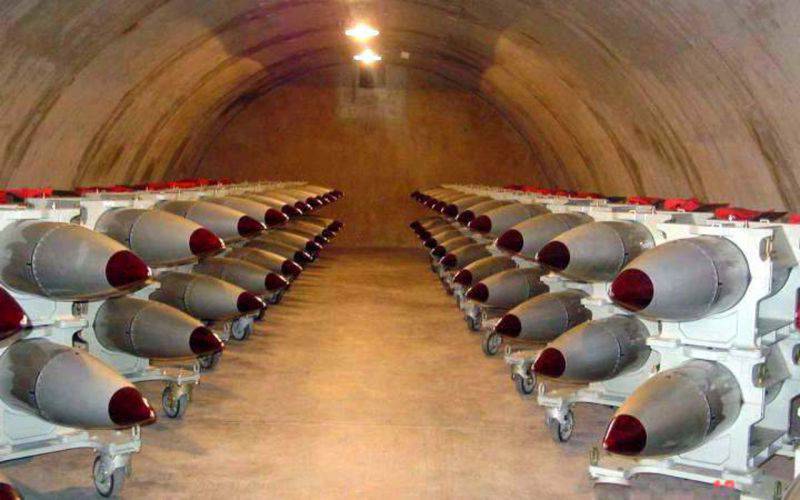 September 22 Russian Agency "Prime" with reference to the German television channel "ZDF" reported on the American nuclear weapons, which may appear in Germany.

The Büchel military airbase may receive twenty new B61-12 type aircraft bombs from the United States. By citing this information, the ZDF channel relies on documents on the US budget.

The deployment of atomic bombs is planned at the Büchel Air Force Base in Rhineland-Palatinate. From the third quarter of 2015, funds were allocated for the adaptation of bombs for the German fighter-bombers "Tornado". Arms experts indicated that these bombs are much more accurate than those currently stored in Büchel. And in the event of war, German pilots will have to lift cars loaded with American bombs into the air.

RBC cites the opinion of Hans Christensen from the Washington Nuclear Information Projects organization. He says that "with the advent of new bombs, the boundaries between tactical and strategic nuclear weapons began to blur."

In addition, the expert said that the Americans will deploy exactly the same weapons at Incirlik air bases in Turkey and Aviano in Italy. Now there is work on modernization.

But in March of the 2010 of the year the Bundestag decided that the federal government should “put pressure” on the USA with the aim of withdrawing American atomic weapons from Germany.

And now, the former parliamentary state secretary at the German Ministry of Defense, Willy Wimmer, told reporters on the television channel that the new “attacking options directed against Russia” are “a conscious provocation.”

The B61-12 bombs placed in Buchel are equal to eighty bombs dropped on Hiroshima. Tests of this weapon took place in the USA at the beginning of July, 2015, reminds RBC.

It looks like we add, the Americans are bringing the cold war to the hot stage. Yes, even so hot, after which little from the planet Earth will remain.

Of course, the bombs are served under the “Russian threat” sauce. What else could have prompted the White House to make such a decision? In fact, the “hegemon” did not intend to turn fraternal France into nuclear ashes or bomb peace-loving London.

The idea of ​​placing new bombs, I suppose, is a kind of test for Europe "for lice." If Germany, whose public and whose parliament against bombs have long objected, will accept weapons without question, then this will mean: America’s European affairs are in perfect order. But if the Germans and all the others participating in the NATO bloc and now burdened with bombs, will be indignant, gentlemen in Washington will draw the appropriate conclusions and take adequate measures.

What do Russian experts think on this topic?

“To begin with, the Western press deliberately lies when it talks about strengthening Russia's military presence in the world,” said "Free Press" TASS military observer, retired colonel Viktor Litovkin. - Even at our own western borders, we are not building up any military infrastructure. Yes, we often conduct military exercises, our combat aircraft more often fly where it is not prohibited: in neutral airspace. However, this is nothing more than an increase in the level of combat readiness of the Russian army, which is not at all aimed at intimidating NATO and Europe. ” “But it’s NATO,” the expert noted, “first of all, the USA is increasing armaments near our borders. It concerns tanksinfantry fighting vehicles aviation».

As for the idea of ​​deploying modernized atomic bombs in Germany, the expert believes that the Americans are trying to put pressure on Russia and at the same time “tie” their allies in Western Europe.

“They keep 200 atomic B61 free-fall bombs on six bases in five European countries: Italy, Germany, Belgium, the Netherlands and Turkey,” the analyst recalled. - At the same time, military pilots of non-nuclear countries are taught how to use atomic weapons. This is a direct violation of the Treaty on the Non-Proliferation of Nuclear Weapons. Moreover, the pilots of military aircraft stationed in the Baltic states are also taught how to use atomic bombs. ”

The expert also noted another violation of the Treaty on the Non-Proliferation of Nuclear Weapons by the West: the North Atlantic Alliance created a nuclear planning committee that includes NATO's 27 countries, except France. In this committee, only two states have nuclear weapons: the United States and the United Kingdom, but the rest of the 25 countries are also involved in nuclear planning. Sergey Lavrov pointed out to the Americans these violations, but there was no clear reaction, the expert noted.

According to Litovkin, the placement of the B-61-12 bombs threatens Russia, since "aircraft bombed with atomic bombs looming in the sky of the Baltic states can be above Smolensk and Moscow in 15-20 minutes of flight."

The leading expert of the Center for Military-Political Studies of MGIMO, Mikhail Alexandrov, who also was interviewed by the Free Press, disagrees with the expert.

“The likelihood that these bombs in a real combat situation will be able to fall on the territory of Russia is extremely small,” he said. - In the very first minutes of the war, most of the NATO airfields will be disabled. And those planes that still take off, will have to break through the Russian air defense system. In reality, the 2-3 of the aircraft can do this. Our missile systems, the same Iskander, are much more reliable. They can hit targets in Europe in minutes. However, they can be equipped with nuclear warheads. By the way, the new Russian Rubezh rocket, albeit an intercontinental one, may well be used to hit targets in Western Europe. ”

According to the expert, “what the Americans are doing can be called virtual intimidation of Russia.” The purpose of such intimidation is to convince the Kremlin to abandon support for Donbass, Alexandrov said.

Probably, we’ll add in conclusion that the idea of ​​sending new bombs to NATO was caused by the policy pursued by Obama as part of the "concept of containment of Russia", which Ambassador in Moscow at one time was Ambassador John Tefft, who replaced the talkative "reboot" Michael McFaul. Bombs, NATO exercises in Eastern Europe, numerous articles in the influential press about “Russian aggression”, “threatening the Baltic states”, “reviving the USSR”, “Putin's empire” and other newspaper and television nonsense, as well as constantly renewed financial sanctions fit into modern episodes of the Cold War, which did not stop even in the time of Boris Yeltsin, when the White House genuinely rejoiced at plunging Russia into the abyss of permanent debt and economic crisis.

We are waiting for the bombing reaction of the German parliamentarians and the German public. Or all went to the "Oktoberfest"?

Observed and commented on Oleg Chuvakin
- especially for topwar.ru
Ctrl Enter
Noticed oshЫbku Highlight text and press. Ctrl + Enter
We are
Nuclear deterrence is back in fashionNew propaganda center of the Bundeswehr
Military Reviewin Yandex News
Military Reviewin Google News
119 comments
Information
Dear reader, to leave comments on the publication, you must to register.