The wick of the European war has already been set on fire ... 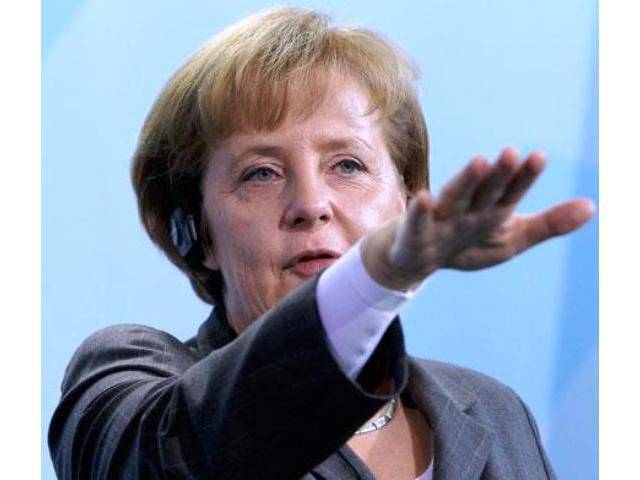 History my family is atypical enough for the Germans. The father, in 1945, the 14 year-old member of the Hitler Youth, was one of six million Volkssturm men, captured by the Red Army and immediately released as a minor. Soviet soldiers spared their father, as well as many of his other peers.

My grandfather, his father, did not fight, worked in the aircraft industry, and how aviation engineer, was with his family after the war sent to Omsk, where he worked at an aircraft factory. There grandfather, Friedrich Lerner, received Soviet citizenship and lived in Omsk until 1979, and then moved with his family to Ukraine, to the city of Kiev. There he died in 1988. Grandfather was a staunch anti-fascist, and he always said that Germany would never atone for Hitler’s criminal hateful deeds.

After Omsk and Kiev, the city was shocked and surprised by its medieval architecture, patriarchal nature and goodwill of the inhabitants.

I was born in Omsk and still love this beautiful Siberian city, the city of my childhood and youth. Thanks to my family, I have two native languages ​​- German and Russian.

I write in Russian because my numerous attempts to publish my impressions of what is happening now in Germany in German have not been crowned with success.

German publications refuse to accept such materials, because it seems that the government of Angela Merkel decided to turn Germany into an explosive cauldron of nations and peoples. I think that it will not lead to anything good. And that's why.

The Germans, especially in cities like mine, are accustomed to an unhurried quiet life. They can calmly treat visitors if they know that they are guests. But when those who arrived did not behave as guests, but as owners, we, the Germans, gradually grew discontent, which could end badly.

The first immigrants from Turkey appeared in Germany at the beginning of the 60s of the last century. For the time being, they behaved quite decently. However, in 1974, the law on family reunification began to operate, and hundreds of thousands of Turks moved to Germany. Already in 2000, the law "On the right of the soil" came into force. According to him, any child born on German territory had the right to a German passport. As a result, today the number of Turks in Germany is almost three million, and a number of districts of Berlin, Hamburg or Frankfurt am Main, rather, resemble Istanbul or Ankara.
Last year, about 200 thousand people moved to Germany, mainly from the countries of the Middle East and Afghanistan. This year, 800 thousands more are expected to arrive. Meanwhile, back in 2012, the number of immigrants was almost 16 million, or 19,5% of Germany’s population.

As a result, even in such small towns as my Wasserburg-on-Inn, the presence of people from Muslim countries on the streets became commonplace. All this was accompanied, of course, by an increase in crimes by visiting Muslims - robbery, robbery, rape.

Violations of the rights of the Germans are recorded in the tens and hundreds, but the authorities turn a blind eye to this. It is not uncommon for German families to forcibly begin to relocate to less comfortable apartments, and give their homes for free to visitors.

And yesterday, the son of my good friend had the following incident: during a sports competition, for the first time in ten years, the dressing room was opened and students' bags and jackets were cleaned. Money, smartphones, tablets disappeared ... They were not allowed to call the police, arguing that it would not search anyway, using the new law “on ignoring minor crimes”.

Such examples can be cited by the hundreds.

In German society, there is a growing mass discontent with the policies of the federal government. And, I am afraid that it may end in mass demonstrations and an avalanche-like growth of the influence of the right and nationalist parties, both on the one and the other. And, perhaps, the coming to power of the neo-fascists.

The greatest insult to the memory of all the fighters against fascism was the decision of the federal government to place the 21 thousand refugees in ... in the barracks of the former Nazi concentration camp Buchenwald. He was one of the largest camps in Germany. From 1937 to 1945, about 250 thousands of people passed through it a year - mostly political prisoners. More than 50 thousands were killed there ...

You can talk for a long time about the catastrophe that is happening now in all areas of German society, but I want to ask the chancellor Angela Merkel a question: does she really not understand that the European Union, whose leader and locomotive until recently was Germany, will collapse in the very near future, Perhaps, many countries, including Germany itself, will bury under its rubble?

It is absolutely clear that the EU was completely unprepared for such a turn of events as a massive influx of refugees. And then you ask yourself a completely logical way: what unknown, but all-powerful and powerful levers of influence do the United States have on Angela Merkel and other European leaders, if they have forgotten about the national interests of their countries?

After all, participating directly or indirectly in all US adventures, the EU itself was to blame for the fact that the Iraqi and Libyan regimes were destroyed in the Middle East, and Syria Assad is on the verge of collapse. Was it really incomprehensible that by destroying and bombing the countries in which tens of millions of people lived, thus the United States and the EU forced them to look for new places to live? And to go except to the old Europe, they simply have nowhere ...

Hundreds of thousands of refugees, trying to break through to Germany, where they are so insistently called by our foolish Chancellor Merkel, will inevitably enter into conflicts with the population of those countries that they have along the way - Serbia, Croatia, Slovenia, Hungary, Greece and others. Over time, their own refugees will appear in them, who will rush further to the West of Europe - to Germany, France, Austria, Belgium, Scandinavian states. If England believes that she, as before, is reliably protected by the English Channel, she is deeply mistaken, since the same France, in order to get rid of the masses of refugees, will simply turn a blind eye and tacitly help them cross into the territory of the United Kingdom.

It is worth adding to this still crumbling Ukraine and imagining millions of Ukrainians who also rushed to the EU to look for work and shelter, and it becomes obvious that thanks to the USA and unreasonable European leaders Europe is on the verge of a big war, the cause of which, on the one hand, will be the desire of the population of the countries of Old Europe to protect themselves from the flow of migrants, and, on the other hand, the intentions of European leaders to prevent mass unrest on this basis and to use public discontent for their own purposes.

I would really like to be mistaken, but I am sure that the problem with millions of migrants has already become the last stage of preparation for a large European meat grinder. And anything can get up to its beginning ...

Especially considering the fact that, according to our intelligence, together with the refugees, militants of the Islamic state are massively penetrating Europe. And I again have a question for Chancellor Merkel: what did our intelligence do before, when the United States began to rock the situation in Iraq, Libya and Syria? 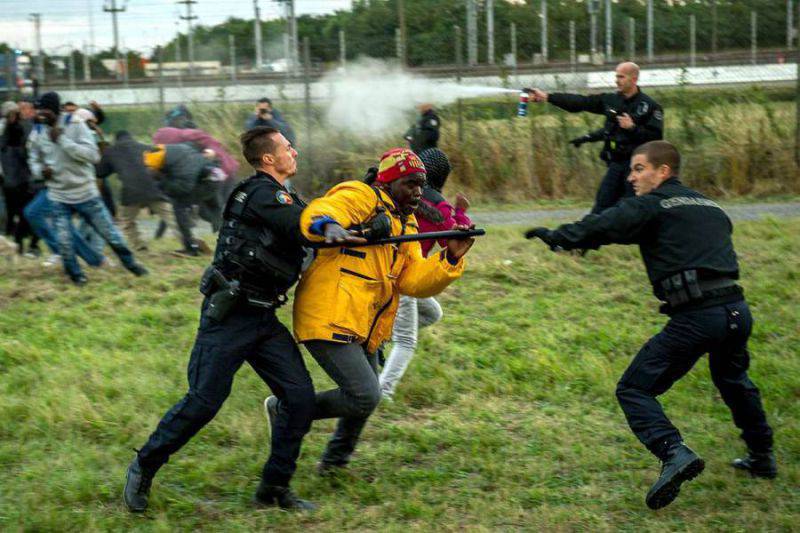 In August of this year, on the way to Kiev, I had to spend the night in Lviv. There, I personally observed a crowd of young people marching through the city, holding torches in their hands under Nazi banners and loudly screaming the most genuine Nazi slogans. 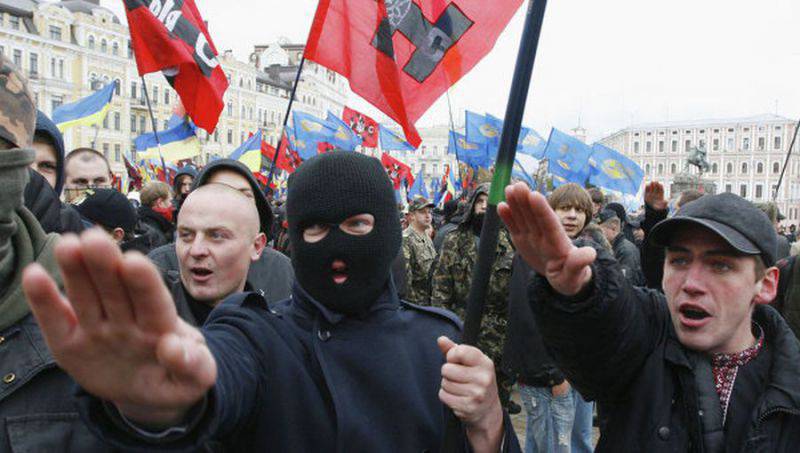 After all, this is exactly what Lviv followers of Nazism shout, who openly walk in Ukrainian cities and kill civilians in the South-East of Ukraine. And their president, Petro Poroshenko, is your good friend, Madam Chancellor, isn’t she? And you fully support him?

And when do you speak the truth? When are we in Germany arrested a 91-year-old woman who is suspected of being involved in 260 with thousands of murders in the Nazi death camp of Auschwitz-Birkenau? Or when you strongly support the openly Nazi Ukrainian regime, endlessly giving him money?

Let us return, however, to my stay in Ukraine. Arriving in Kiev and having stayed there for ten days, meeting with my friends and acquaintances, I came to the conclusion that the Ukrainians were completely duped by American propaganda. And the United States does this only for two purposes: first, to enrich themselves at the expense of unfortunate citizens of Ukraine. And, secondly, to create a bloody center of instability on the borders of Russia.

But the second goal, I think, serves only to cover the first. One of my Kiev acquaintances, who actively participated in the presale preparation of the largest Ukrainian state enterprises, said that the company that had started to discredit the Ukrainian volunteer battalions had a completely cynical goal ...

Simply, the members of the expert group on Ukraine at the US State Department are not interested in the coming to power of people from these battalions, as they can prevent members of the current Ukrainian government headed by Arseniy Yatsenyuk and Natalia Yaresko from promoting the financial interests of the so-called “Madeleine Albright Group”, which has views of many Ukrainian assets.

The head of this expert group, a certain Mr. Karatnitsky, with the participation of Yaresko and the former head of the presidential administration of Ukraine Levochkin, through the company Mirmidon group 11c, is actively working in the negotiation process.

The most interesting thing, according to my acquaintance, is that USAID, having checked the effectiveness of the use of funds of this expert group, found that this group appropriated and squandered about 40 percent of the allocated funds, because of which there was a big scandal in the US Congress that the public.

So, Mrs. Merkel, it’s not enough for you to follow US policy. you personally contributed to the coming to power in Kiev frank neo-Nazis. It is also not enough for you that you contribute to the enrichment of some American politicians who are heavily mixed with the blood of Ukrainian citizens. Now you are unleashing a European war that will become the Third World War.

I believe that the invasion of migrants to Europe and Germany, in particular, is beneficial to American and European politicians, because it will allow them to enrich themselves when stealing funds allocated for the resettlement of refugees. In addition, it will divert the attention of Europeans from problems in the countries of the European Union and turn the anger of Europeans on visitors.

But ... Madam Chancellor! What will happen if crowds of migrants, among whom, according to our intelligence, not only about 80 percent of perfectly healthy young men, but also many ISIS agents, will come into conflict with our police and in search of weapons will come to the American bases, which in Germany there is 305? But are American tactical weapons still stored there? What will you do, Madam Chancellor? You want war in Germany ...

Ctrl Enter
Noticed oshЫbku Highlight text and press. Ctrl + Enter
We are
What you didn't want to know about EnglandList of destroyed the largest and most high-tech enterprises
Military Reviewin Yandex News
Military Reviewin Google News
120 comments
Information
Dear reader, to leave comments on the publication, you must sign in.