On the mistakes of Muammar Gaddafi 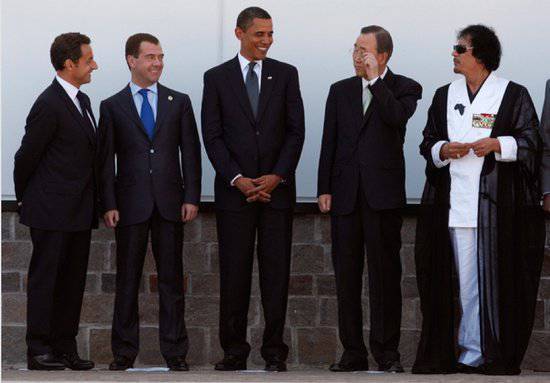 The achievements of the Libyan Jamahiriya (among them are the “Water Project” and the high level of welfare of Libyan citizens, projects to unite Africa and create a single monetary system for the African Union, etc.) were mentioned quite a lot, but the fatal mistakes of the Gaddafi regime which ultimately led to his fall.


His main mistake is "Flexibility" of foreign policy. The colonel with his political throwings created such a situation that he had almost no allies, even among the outspoken enemies of the West. So, Iran was an opponent of the West, but provided diplomatic support to the Transitional National Council (PNS). For Tehran, Gaddafi was not an ally, but a competitor in the struggle for influence in the Islamic world.

Based on this policy, Gaddafi until recently did not believe in the possibility of an attack on Libya. Tripoli was a “friend and ally” of Italy, France, good relations developed with Russia, China. There were no apparent reasons for striking Libya. Gaddafi himself in 2003 year refused to develop nuclear weapons, severed relations with the so-called. “international terrorism,” paid a large amount to the relatives of those killed in the explosion of an airplane over the Scottish village of Lockerbie (although this is a very dark matter, there are doubts that Tripoli was involved in it). He helped European countries to contain the wave of illegal migration to Western Europe from Africa. He invested large sums in the Western financial system, supporting it. Gave expensive gifts to Western leaders and their entourage.

From this error follows another - Muammar Gaddafi's striking inattention to the needs of his armed forces, especially to its key types, the latest air defense systems, air forces, coastal defense systems. Outwardly, Libya, after the lifting of the embargo in 2004, was active in modernizing the obsolete weapons of its armed forces. But in reality, Gaddafi and his military have been asking and choosing for too long. The Libyan armed forces remained at the level of the mid-1980s, although before their eyes were examples of Yugoslavia and Iraq, which possessed a more powerful defense than the Jamahiriya. More than 6 years have been wasted. Although the Colonel had no problems with finances, and Russia would be happy to help complete the modernization of the Libyan Armed Forces. "Armor", "Buki", "Torah" and S-300 could reliably cover the sky of the country, MiG-35 and Su-30 - to meet the erupted Aviation the enemy. Given the fact that most of the NATO forces operated from the sea, the Bastion anti-ship missile systems and Lightning-type missile boats would greatly strengthen the country's defense.

The presence of finance from Tripoli would help to hire military experts from Ukraine, Belarus and Russia to train Libyan specialists. Obviously, they could for good money and make war on the side of Gaddafi. Such a rearmament of the Libyan Armed Forces would have cooled the "hawks" of the West.

Even when the war had already begun, the Colonel believed that there were good chances to come to terms "in an amicable way" without escalating the conflict. Therefore, he made another mistake (Milosevic also committed it when they bombed Yugoslavia), did not respond to the West in full. With his financial resources and time since the 2001 bombing of the year, when it became clear that the United States would "modernize" the Islamic world, the Colonel could create sabotage cells throughout Europe and the United States or simply buy people who would become suicide bombers. Strikes with the help of "suicide" units, saboteurs on Western society (explosions or attacks on banks, state institutions, infrastructure facilities) could dramatically undermine the desire to fight.

Gaddafi's internal error - he actually "dismissed" his subjects, they lived better than other Africans, while many Libyans became parasites, idlers. A huge number of workers, employees, specialists both from Black Africa and North Africa (tens of thousands of Tunisians, Egyptians, etc.) and from countries distant from Africa, such as Ukraine and Belarus, traveled to the country. Plus, the expansion of this consumer society by Europe close to them - satellite TV, the Internet showed an even higher standard of living (in many respects the situation is similar to the decomposition of the Soviet man in the street with attractive pictures of European life). As a result, young people and part of the population fell for stories about “democracy”, in which life would be even better.

When the uprising began, Gaddafi tightened (I didn’t believe that it was already a war, not a petty provocation) with the suppression of the uprising in Benghazi and other cities of Cyrenaica. He gave create bridgeheadthrough which the country began to break. In Syria, Assad did not repeat this mistake - all emerging foci immediately “extinguish”.

One of the reasons for such “relaxation” is poor training and organization (discipline) of the Libyan security forces, which was later confirmed by the numerous betrayals of senior officers and intelligence officers.

Gaddafi and his state security missed the "stirring" of the opposition, which was in full swing making contacts with Western intelligence agencies before the war. Often, the Colonel made theatrical gestures, letting everyone out of jail, even those who threatened him with death and participated in conspiracies. The Libyan leader gave the West to prepare the "fifth column" for the performance, did not stop its activities and the work of Western intelligence services in Libya.

It is even surprising that with such serious failures he was able to resist for so long.

We are in Yandex Zen
About Stalin and Khrushchev
Winners are not judged?
41 comment
Information
Dear reader, to leave comments on the publication, you must to register.