How and what Japan will storm the Kuril Islands of Russia 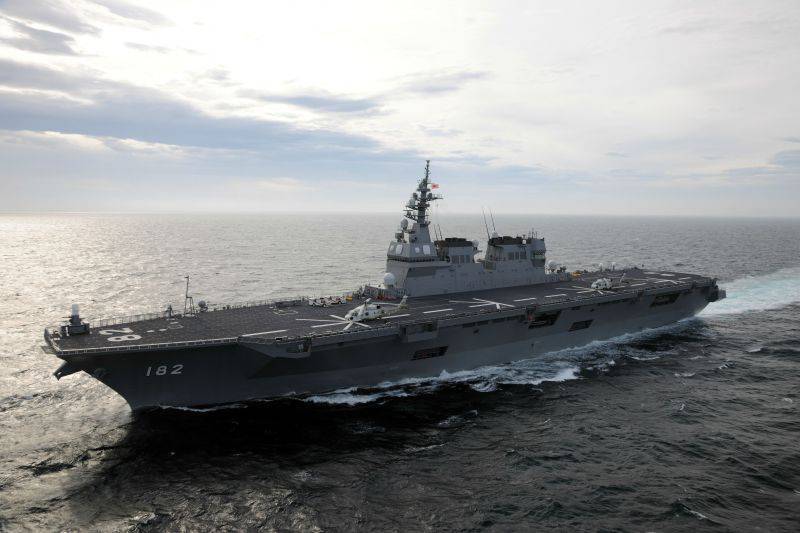 The last 2 of the year, Japan is actively getting rid of the restrictions associated with the armed forces, and imposed after the defeat in World War II. In April, 2014, the country's government lifted the ban on arms exports. Now Japanese companies will be able to export military products if, in the government’s opinion, this does not contradict Japan’s interests. For example, recently it became known that Japan will develop a piece of software for the export version of American destroyers equipped with an anti-missile defense system (ABM) Aegis. In July, 2014, the current Prime Minister’s government, Shinzo Abe, passed a resolution allowing the use of the Japan Self-Defense Forces not only in attacking the country, but also in the event of an attack on the Allies, and with a serious threat of such an attack. In July, 2015, the Japanese Self-Defense Forces was allowed to participate in hostilities outside the country. In fact, the pacifist article 9 of the Constitution of Japan, which prohibits even the presence of armed forces, is now completely destroyed. By the way, Shinzo Abe, who served as prime minister from 2006 to 2007, even then tried to formally amend the constitution, but could not gain support for the necessary two-thirds of parliamentarians (as a result, the constitution remained unchanged from 1947).

What does this mean for Russia, given Japan’s territorial claims regarding the southern Kuril Islands, and what is the balance of power?

First of all, it is necessary to pay attention to the naval and air forces of the two countries, so the hypothetical collision will go beyond the island territory.

The Japanese Navy is a pretty serious force. The 3 helicopter carrier is in service - the 2 of the Hyug type and the 1 of the new Izumo-type, resembling the ill-fated Mistrals. Available are 37 destroyers with guided missile weapons, of which 6 are equipped with the eponymous American combat information management system and the Aegis missile defense system; 6 frigates with anti-ship missiles (RCC) Harpoon; 16 submarines of the type "Litter" and "Oyaso", armed with the same Harpoon American anti-ship missiles, with a range of up to 150km. All listed ships are in excellent condition and released relatively recently.

The Japanese Air Force is also quite strong, with heavy F-200 fighters armed with 15, Mitsubishi F-60 2 fighters based on the light F-16 American fighter. The 42 F-5 fighter, ordered by 35, can be planted on helicopter carriers in a vertical take-off version, turning them into light aircraft carriers.

The Kuril Islands are protected by the 18th machine gun and artillery division, located on the "Japanese" island of Iturup. This unit has been significantly strengthened in recent years, 62 are in service tank T-80BV, Buk-M1 anti-aircraft missile systems division, the latest Tor-M2 air defense systems, some artillery and other weapons. Sakhalin, located nearby, is protected by the 39th separate motorized rifle brigade, but the range of its weapons and air defense does not allow it to actively participate in the defense of the Kuril Islands. In the near future, the Bastion coastal systems equipped with Onyx supersonic anti-ship missiles capable of hitting enemy ships at distances up to 300 km and the Pantsir-S air defense system will be transferred to Iturup. Buk-M1 air defense systems will be replaced by Buk-M2, and Ka-52K attack helicopters in the marine version will appear on the island.

As for the Pacific fleet (Pacific Fleet) of the Russian Navy, it is armed with a Project 1164 missile cruiser, with 16 most powerful supersonic anti-ship missiles P-1000 "Volcano" with a flight range of 700 km. At the same time, anti-ship missiles launched by the enemy’s fleet exchange information with each other about goals and select priority ones. Only 5 destroyers are in service (large anti-submarine ships). Everything else is small warships and missile boats. The situation with the submarine fleet is more interesting: here there are 5 strategic nuclear-powered missile submarines (though this is not a means of war with the Japanese), 3 nuclear submarines of Project 949A Antey carrying 24 P-700 Granit anti-ship missiles, close in characteristics to the P-1000 - this is perhaps the most formidable weapon TOF. There are also 4 combat-ready diesel-electric submarines of the 877 project, which also have RCC.

Aviation, concentrated about 1000 km from the Kuril Islands in the 22nd and 23rd fighter aviation regiments. It is constantly being updated; there are already 72 Su-27SM / Su-30SM / Su-35 heavy fighters. In general, in quantity we are inferior to the Japanese.

1. In carrying out lightning operations, the Japanese Armed Forces for some time will have a noticeable numerical superiority both at sea and in the air. As a result - the destruction of the same coastal complexes from the air is possible.

2. To neutralize the threat from the air, an interesting move would be the deployment of the long-range C-400 air defense missile system on Iturup.

3. The composition of the Pacific Fleet against the background of the same Japanese fleet causes sadness and melancholy - a good half of the ships are not capable and are under repair or are on the verge of decommissioning. In Japanese, all the ships are new and in large numbers, perhaps our advantage is only noticeably more powerful supersonic anti-ship missiles, whereas the Japanese Navy has only subsonic ones, and even with a smaller range.

4. New militarization of Japan is a serious headache for Russia, and so surrounded by enemies from almost all sides. Strengthening the grouping of troops in the Kuriles and Sakhalin is a heavy necessity, as is at least some update of the Pacific Fleet.

5. Let's not forget about the US Navy 7 fleet, based in Japan and having an aircraft carrier, 2 missile cruisers, 7 destroyers, 3 nuclear submarines and other ships. And this is a completely different force, against which there is no other way than the use of at least tactical nuclear weapons.