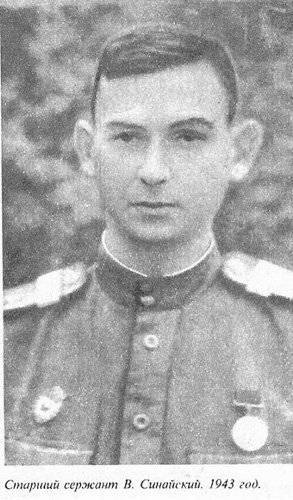 This article, written by a veteran of the Great Patriotic War, tells about the acquaintance of the Soviet combat pilots with the German fighter Bf-1943 one of the latest modifications in the summer of 109. In this article, the author speaks with confidence about Bf-109K, distinguishing it from Bf-109G already seen. However, this machine appeared only in 1944 year. In the collection of Artem Drabkin "I fought in a fighter. Those who took the first blow. 1941-1942" are already talking about just Bf-109 without any specification of the modification. Therefore, I decided not to change anything in the author's text and leave everything as it is.


In the summer of 1943, shortly after the fighting on the Kursk Bulge, I, at that time, an airplane mechanic, received an order to surrender my La 5 and immediately report to the headquarters of the 8 Guards Fighter Aviation Division. There I learned that I was included in the group for the performance of a particularly important task, the essence of which will be reported by the group commander, Captain Vasily Kravtsov. Besides him, the group included five of the most experienced pilots of our division. 6 total, two from each regiment, and two technicians.

Captain Kravtsov detailed to us the essence of the assignment. He said that a few days ago at one of the alternate aerodromes two Messerschmitt-109 landed, which, apparently, got lost. When the pilots moved far enough away from the aircraft, BAO soldiers left the shelters and surrounded them. One pilot, a lieutenant, shot himself, and the second, Chief Sergeant Major, surrendered. During interrogation, he testified that he had flown consciously and, being the leading couple, he deceived the vigilance of his wingman, an officer. The German also said that he is a Messerschmitt test pilot and arrived at the front to test a new machine. Kravtsov explained that the translator sent "from above" is unlikely to be useful to us, since he is absolutely not familiar with aviation technique. Therefore, the division commander instructed me to fulfill the role of translator.

After some training, we were taken to the airfield, where both aircraft and the German pilot were. It was a brown-haired man of medium height, about twenty-eight. Outwardly, he did not resemble a military man; long stripes and sportswear suit made him look like an athlete or artist. He was wearing trousers, boots and a jacket of light gray material. He was absolutely calm and did not look like arrogant Wehrmacht officers with whom we had to deal. The only reminder of his participation in the war was the Knight's Iron Cross, which hung around his neck.

The airfield, to which we were brought, was small and well sheltered from prying eyes by the surrounding forest plantations. We were given a small unit of BAO, which provided everything necessary, including the protection of the airfield. One of the German fighters turned out to be well known to us Me-109F, and the second was unfamiliar, although it was completely obvious that this was also a "messer."

At first, we thought it was the Me-109 G-2, about which we had heard a lot and had repeatedly seen in the air. But, unlike the sharp contours we used to, the Me-109 had rounded ends of the wings and tail. The German pilot told us that this is the latest model, the Messerschmitt 109K, which is in the final stages. That he flew in for front-line tests and there are only a few such machines. Their arrival at the front is planned for 1944.

On the very first day, we and the mechanic Bedyukh successfully mastered the rules for operating the Messers and instructed the pilots. This turned out to be simple due to the active assistance of the German pilot and due to the high degree of automation of the machines. Already on the second day it was possible to start flying. But then they made an unfortunate mistake. Captain Kravtsov decided to immediately try out the new model Me-109K, without consulting with the German pilot, and to take off, much to our chagrin, thoroughly crashed the car. We only had one serviceable Me-109F at our disposal. The first flight on it was made again by Kravtsov, but after a thorough consultation with the German.

It turned out that the “messer” during takeoff is not easy: due to the strong reaction of the propeller and a rather small distance between the wheels of the landing gear, the plane sharply led to the right, and it was necessary to completely “give the left leg” in advance. In the second attempt, everything went well, and Kravtsov flew in a circle around the airfield.

After Kravtsov, the other pilots of our group also took off at the Messer. His comprehensive study in the air and on earth lasted about three weeks. According to the consensus of the pilots, the plane was folded on take-off and extremely simple when landing, Kravtsov remarked: he removed the gas - and he sits down.

In the air, the Me-109 is simple to operate and reliable, abundantly equipped with electric guns, which allowed young pilots to quickly master it. Especially everyone liked the electric screw machine and the step indicator. Using this machine, it was possible to change the propeller pitch when the engine was not running, which was not feasible on our aircraft. And the pointer at any time showed the pitch of the screw. It is very simple to use: in appearance it looked like a clock, and it was only necessary to remember the position of the hands.

The system of measures to ensure the survivability of the aircraft proved to be particularly well developed. First of all, we paid attention to the petrol tank: it was located behind the cockpit behind the armor support. As the prisoner explained to us, such an arrangement of the tank allows the pilot to fly as long as the plane is held in the air, since the flame does not reach the cockpit. There are two water radiators in Messer - right and left, and each of them has a cut-off valve. If one of the radiators is damaged, you can turn it off and fly with a working one. If both radiators are broken, you can turn them off and another 5 minutes to fly until the water remaining in the engine boils away. A similar cut-off system exists in the oil system.

We were surprised by the cockpit canopy: it did not move backward, as on our fighters, but toppled over to the side. It turned out that this was done specifically so that the pilots would immediately learn to fly with the lantern closed.

We also received an answer to the question of how the reliability of German aircraft is ensured. All moving parts of the guns "Erlikon" and machine guns make only a reciprocating motion, any delay is eliminated when reloading. The trigger on the control stick is designed so that when the pilot releases it, then weapon recharged. Thus, during an air battle in the event of a gun or machine gun failure, it is enough to release the trigger - and you can open fire again.

Since all contacts with the German pilot were made through me and we had fairly good relations, he was quite frank with me. That's what he told about himself.

His name was Edmund Rossman. In 1943, he was 26 years old, from childhood was fond of aviation, with 15 years he flew a glider. He graduated from flight school, became a military pilot, and then a test pilot. He flew most German cars and many of ours. He was fond of aerobatics, not without air hooliganism: he performed a dead loop on a heavy three-motor Yu-52 in the area of ​​Odessa.

Rossman began his combat activities on the Western Front. Then he was a night fighter in the air defense system of Berlin, flying the Me-110 Jaguar. He had several orders, including the "Knight's Iron Cross" for the "Flying Fortress" shot down over Berlin. In the fall of 1942, when the Berlin Air Snipers group was transferred to the Caucasus, Edmund hit the Eastern Front. Until spring, 1943 fought in the Caucasus, personally shot down Soviet aircraft near 40.

After staying on the Eastern Front, Rossman firmly decided to end the war. Testing at the Me-109K front, he realized his intentions. He was convinced that the war was lost and further bloodshed was senseless and criminal.

Edmund willingly answered all our questions. We learned from him that the new model Me-109K, by improving aerodynamics and increasing engine power, develops high speed and has a good rate of climb and maneuverability. The maximum speed of 728 km / h, the ceiling of 12500 m. Armament consists of X-NUMX-mm gun "Oerlikon", firing through the hub of the screw, and two large-caliber machine guns. The length of the aircraft 20 m., Wingspan 9,0 m.

Our aviation Rossman gave a dual assessment: the latest models of aircraft considered very good, and instrumentation, equipment automation tools backward. I wondered why our planes didn’t have such simple and necessary things as an ammunition counter, cutoff valves on water and oil systems, a screw angle indicator and others. He considered the best fighter La-5, and behind him - the Yak-1.

By the end of July 1943, all the pilots of our group fully mastered the art of piloting the Messer, conducted training fights with him. But it was impossible to use in the Me-109F case as a scout, since the appearance of the Messer over our positions invariably caused fire from all types of weapons. The red stars on the wings did not help either.

Soon we were ordered to return to our units, and the Me-109F and the German test pilot were sent near Moscow to the Air Force Research Institute. I know nothing about his further fate.

Ctrl Enter
Noticed oshЫbku Highlight text and press. Ctrl + Enter
We are
"Fire arc". Day of the defeat of the German troops by the Soviet troops in the Battle of KurskAchtung! Achtung! In the air La Xnumx
7 comments
Information
Dear reader, to leave comments on the publication, you must to register.