March 3 2015
48
Veterans of the Battle of Stalingrad wrote to German Chancellor Angela Merkel a letter in which they recalled the lessons of World War II and fascism, which is gaining momentum in Ukraine today. Front-line soldiers urged European countries to prevent the recurrence of grim stories 20-century and unite in the fight against this evil. Today, the Letter of the Living was supported by youth organizations, the public and government officials at a roundtable meeting on the theme: "Stalingrad Victory: the battle that changed the world", which was held in the Triumphal Hall of the museum-panorama "Stalingrad Battle". IA "Height 102" publishes the full text of the letter of veterans. 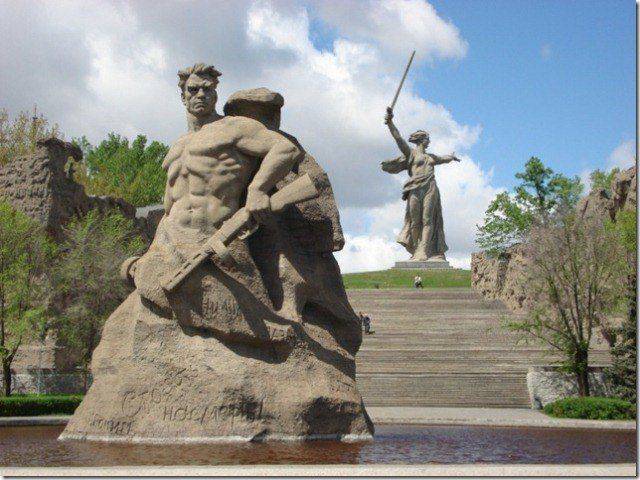 In the year of the 70 anniversary of the victory over Nazism, we, veterans of that terrible war and participants in its most terrible battle, observe how a ghost of the ghost of the brown plague once again wanders around Europe. This time, Ukraine became the breeding ground for Nazism, where from ideology in the ultranationalist, anti-Semitic and misanthropic vein, they turned to practice - to physical violence, the destruction of dissidents, the killing of people on the basis of ethnic hatred, and the rejection of a different culture.

Familiar pictures stand in front of us: torchlight processions, thugs in uniform with Nazi badges, raising their hands in a Nazi salute, fascist parades in the center of Kiev, guarded by the state police, statements about the second-grade of some peoples. All this we have already seen and know what this leads to.

In Ukraine, the smoldering and warming up of the last decade, the brown plague broke out and led to a bloody civil war. Nazi forces, such as the Right Sector, the so-called National Guard, numerous informal but well-armed battalions of the Azov type, with the support of the Ukrainian army, the army aviation and heavy artillery systematically destroy the population of the East of Ukraine. Peaceful people are killed simply because they want to speak their native language, because they have a different opinion about the future of their country, because they do not want to live in a state where Bandera is the leader.

These followers of the so-called "Ukrainian Liberation Army", which, we remind you, Frau Merkel, fought during the Second World War as part of the Wehrmacht, as well as the SS division "Galicia", particularly distinguished in the massacres of Soviet Jews, achieved the glorification of their ideological fathers and grandfathers. The names of the Nazi criminals called the streets of Ukrainian cities! The history of the twentieth century in Ukraine is rewritten before our eyes! Is it any wonder that the current Bandera with a fanatical gleam in the eyes, familiar to us, veterans, on the fronts of the Second World War, at the Battle of Stalingrad, blinded by hatred, are urging to wipe out the residents of the east of their country with napalm ?! There is documentary evidence of how people were killed simply because they were wearing the St. George ribbon - this symbol of victory over fascism.

The truth is, Frau Merkel, that a full-fledged Nazi rampage is taking place in Ukraine! These are not separate anti-Semitic remarks in parliament and not short articles underestimating the superiority of one race over another. these are full-blown and bloody crimes, the victims of which already number in the hundreds and thousands.

But the West takes a very strange position, and we do not understand it. It can be interpreted as an indulgence of Ukrainian Nazism. This is how they interpret the position of Europe in Ukraine, and this is how the Russian people begin to perceive it. And we would like to know what the German people will say from the height of their national historical experience about this.

It is important for us to know your opinion, the opinion of the leader of a great people who once fell ill with a brown disease, but at the cost of terrible sacrifices was cured of it. We know how your country is fighting any manifestations of Nazism. And believe me, we appreciate it. Moreover, it is difficult for us to understand why, carefully cleaning out any possible germs of Nazism in your country, do you allow its large-scale manifestations in another part of Europe?

Why are European leaders marching in support of French cartoonists killed by Islamic terrorists, but not marching against fascism in Ukraine? Why is the head of state taking part in these marches, who gave the order to destroy his own population? Why do 12 French victims deserve attention, and thousands of killed Russian and Ukrainians - no? Do you know how many children killed in the east of Ukraine by thugs with a Nazi swastika on a uniform? Do you want to know about it? We will provide you with this information if you do not own it. Why do European nations calmly look at the mass violence in Ukraine? Or is it just not talked about in your media? Then what is their notorious independence? Regardless of the facts? From the truth? What is the true purpose of your economic sanctions? Loosen Russia as a power? Support Nazism in Ukraine? Or just devalue our pensions, which we receive as participants in the Second World War?

1. The rewriting of history is a direct path to Nazism.
With this, all the European fascist regimes of the 20-x and 30-s began. The same path was followed in Ukraine: from the rewriting of school history books to the mass demolition of Soviet monuments. The pinnacle of lies was the statement of the Ukrainian Prime Minister Yatsenyuk to the German media about "the Soviet invasion of Germany and Ukraine"! I would like to know your opinion about this, the opinion of the leader, where real prison terms are awarded for denying the Holocaust.

2. The search for the guilty is a manifestation of Nazism.
Fascist regimes write off all the failures of their country to separate groups - ethnic, social, religious. In the distant past, Jews and communists spoke in this capacity. In present-day Ukraine, Russians, Russia as a whole and the population of the east of the country are appointed as the perpetrators.

3. If Nazism appears in one country, then the plague will go all over the world.
You can not encourage Nazism in one country and believe that it will remain within its borders. A wave of Nazism will reach everyone, stepping over any state borders. That is why Nazism was called the "brown plague". Nazism must be stopped at distant approaches, otherwise it will come to your home.

4. Nazism can not be ignored, you can only fight it.
If someone thinks that one can simply turn away from Ukrainian Nazism, not to notice it, then he is greatly mistaken. The nature of Nazism is such that even its own disregard is perceived as encouragement, as a manifestation of its strength. Nazism does not remain local, it can only grow and develop! Therefore, the only way to oppose Nazism is a tough and active fight against it.

5. The most important weapon in the struggle against Nazism in its early stages - the truth.
It is the truth that defeats Nazism. By showing the misanthropic essence of Nazism, manifested in its ideology, the statements of its supporters, in concrete reprisals against people, we are fighting Nazism as such. Historical truth is the best preventive measure against Nazism. If from the young Ukrainians their own government did not hide the real history of their country and people, then there would be fewer supporters of Nazism in Ukraine.

Modern media play a huge role: they can either form Nazism or resist it.

Dear Frau Merkel! Russia, as the successor of the USSR, has a special historical mission. 70 years ago, we ended Nazism in Europe, suffering the most terrible sacrifices in that war. We personally, Stalingrad, turned the tide of history with inhuman efforts. Not only our history, but European, world. And we can not allow the recurrence of Nazism. Moreover, we have at our side! We fought, and we will fight this evil. And we offer you to fight with him together!
One character of the legendary and our beloved feature film, which is the prototype of a real Nazi boss, according to the plot of the film said: "As soon as somewhere instead of the word" hello "they say" Heil "... know: there they are waiting for us, from there we start our great revival. "

Frau Merkel, in Ukraine “Heil” sounds everywhere, openly and almost supported by the authorities. It's time to stop this evil with the whole European world! We very much hope that the German people, like all the other peoples of Europe, together with the Russian people will crush the reptile in the bud!

Fascism will not pass! Long live the world!

PS According to the information of the "Height 102" news agency, veterans of the Battle of Stalingrad together with the "Letter of the Living" sent Frau Merkel and the new edition of the encyclopedia "The Battle of Stalingrad". The chairman of the editorial board of this publication, we recall, is the famous scientist and public figure, veteran of the Great Patriotic War, Honorary Citizen of the hero-city of Volgograd, Maxim Matveyevich Zagorulko - one of the signatories of the Living Letter.