T-72 were the best tanks of the Iran-Iraq war 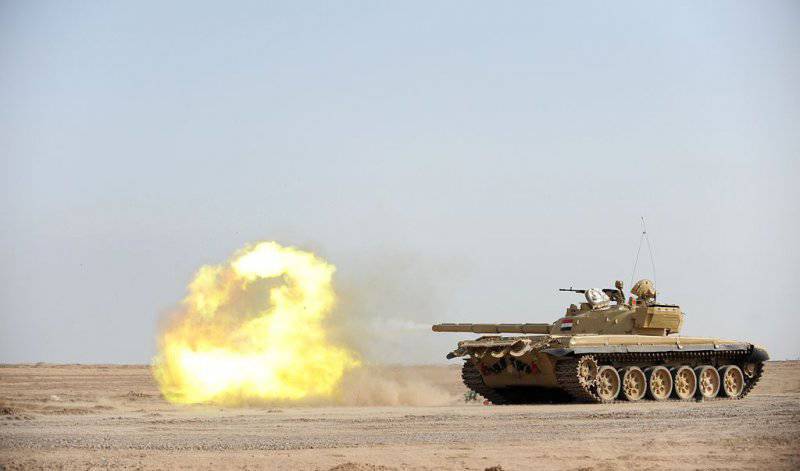 During the bloody and prolonged Iran-Iraq war (1980-1988) Tanks T-72s were considered the best main tank. Fighters of the Iranian army called the T-72 the most valuable trophy that was able to recapture the army of Saddam Hussein. These tanks were immediately thrown into battle again, but already against the former owners.


The Iraq-Iran armed conflict became a serious test for both Iraq and Iran and was extremely beneficial to their eastern and western "partners", as the two powers claiming leadership in the region were linked by a bloody war that bound all their resources.

Both sides at the beginning of the war widely used armored forces. The Iraqi armed forces mainly used Soviet-made tanks, infantry fighting vehicles and armored personnel carriers. The Iranian army started the war mainly with Western-made machines (American M60, M47 and M48, British Chieftain and Scorpion). So, before the 1979 revolution, Iran received about 1000 "Chiftenov" modifications of the Mk 3 and Mk 5. Their 120-mm guns were guaranteed to hit all the existing Soviet-made tanks that were used by the Iraqi army. But after the start of the war, although Iraq was the aggressor, Western countries broke off relations with the Islamic Republic. Without new supplies and spare parts, the park "Chiftenov" quickly declined. By the end of the war, a little more than XI NUMX "Chiftenov" remained in the Iranian army. True, a lot of Soviet-made and Chinese-made cars appeared in the Iranian forces, which were supplied from China, North Korea, Libya and Syria.

In the first phase of the war, from September to December 1980, when Iraq launched a broad offensive on the front approximately 700 km, Baghdad struck out with four armored divisions. At the same time, Iraqi generals made a serious miscalculation - armored units bogged down in the capture of cities, which led to large losses in tanks and loss of time. The Iranian army was able to recover and organize stubborn resistance. At the beginning of the war, the Iraqi tank battalion equipped with T-72, in a battle in the area of ​​Kesre-Shirin, defeated the Iranian part armed with the British "Chieftainers".

From the end of 1980 to September 1981, a relative balance of power was established at the front. Then the strategic initiative began to cross the Islamic Republic, the Iranian troops launched a counteroffensive. Iran has returned almost all the previously lost areas and moved the fighting to Iraqi territory. During the Iranian offensive in 1981, several significant tank battles took place. One of these battles occurred in the valley of Harha near the town of Susangerd.

In January 1981, a reinforced Iranian 16th Panzer Division (300 Chiften and M60 tanks), supported by a parachute brigade, prepared an attack near the Iranian Susengerd with the task of freeing up the road to Ahvaz and lifting the Iraqi siege from the city of Abadan. The Iraqi command predicted the enemy’s maneuver, and advanced a tank division (300 T-62 tanks). On January 5, Iraqi intelligence discovered Iranian tank columns. Iraqi forces were concentrated near the village of Ahmet-Abad in the Kharhi Valley. On January 6, an advanced Iranian brigade entered Iraqi positions. The Iranians felt that they were facing minor forces. The Iranian division on the move, without intelligence, went on the attack. The Iraqi forces withdrew, luring the enemy in a pre-prepared fire bag, and attacked from the flanks. The Iranian brigade was defeated, losing up to hundreds of cars. On January 7-8, two other Iranian brigades were defeated. They acted separately, without the support of infantry. Aviation could not provide support, as the opponents came close. As a result, the Iranian division was defeated and retreated. Iraqis said they destroyed and captured more than 200 Iranian tanks (Iranians admitted losing 88 vehicles). Iraq lost 45 T-62 tanks in the battle. During the battle, it turned out that modern Soviet-made tanks are better than Western vehicles. An armor-piercing projectile of a 115-mm cannon of the T-62 tank reliably pierced the frontal armor of the British "Chieftains". After this battle, the Iranians avoided frontal battles with Iraqi armored forces.

However, superiority in human resources allowed Iran to continue the offensive. Iraq has moved to a strategic defense. After the fall of 1982 in May of Khorramshahr, the Iraqi command stopped using armored forces as the attacking point of the troops. The tanks are now mostly located in the second echelon, in shelters. To cover their maneuver, moats or sand mounds were often built. For counterattacks, armored units were used only as a last resort, if enemy units did not have heavy anti-tank weapons. weapons.

In the 1982, the use of T-72 was also noted. During the July battles near Basra, the Iraqi 10 Brigade launched a flank attack on the Iranian division. As a result, the Iranian army lost more than 200 armored vehicles. This battle marked the capture of T-72 by the Iranians - the Iraqi army lost 12 machines.

The last mass use of armored forces occurred in 1988, when Iraq, having mobilized the economy to the maximum, prepared a major counter-offensive. Using advanced internal communications, covered by aviation, Baghdad 17 April threw about 200 thousand soldiers into the attack. The main blow was struck by the Iraqi Republican Guard, armed with T-72 tanks. The Iraqi Air Force delivered a powerful blow to the Iranian positions, the Iraqis also used chemical weapons. Before the offensive, Iraqi special forces cut off communications between the defensive positions of Iranian troops. Then the tanks launched an offensive supported by combat helicopters and infantry. In addition, airplanes and helicopters attacked Iranian communications to impede the Iranian reserves approach.

As a result, the Iraqi army completely liberated its territory and again invaded Iran. However, the resources to continue the war were not. Seeing the further futility of the war, both sides entered into a truce. 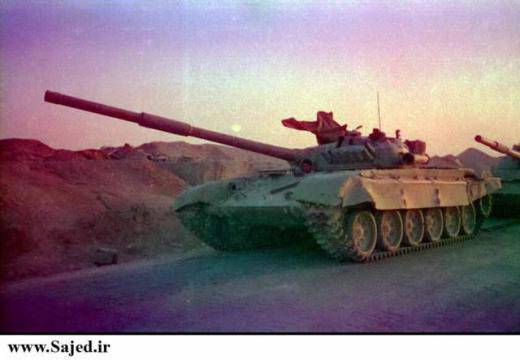 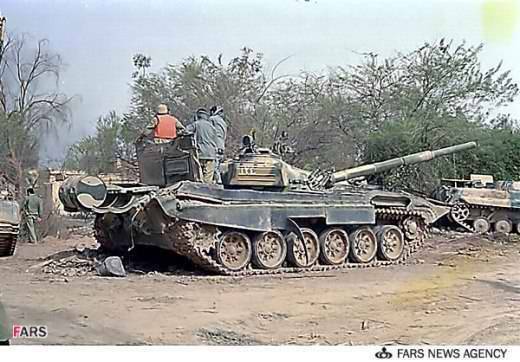 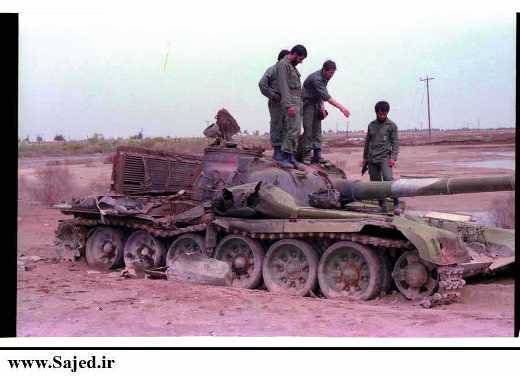 The Soviet censorship before 1985 did not give information to the use of the T-72 in the Iran-Iraq war. In reports from the battlefield, it was forbidden to mention the presence of these tanks in the Iraqi army. Only then did censorship restrictions be removed, and Soviet-made tanks began to flicker frequently in the plots of information programs.

The first 100 Soviet-made machines were obtained by Baghdad in the 1979-1980. These were the cars, the former export versions of the T-72 "Ural-1" with an optical sight-rangefinder TPD-2-49. From the tanks that came into service with the Soviet army, they differed mainly in the design of armor protection of the frontal part of the turret and in the systems of anti-nuclear defense and ammunition equipment.

The Soviet government, irritated by the Iraqi army’s invasion of Iran, temporarily banned arms shipments to Iraq in 1980. However, the USSR, contrary to popular belief, did not control the actions of the allies in the socialist bloc. A holy place is never empty, especially when it comes to such a lucrative business as the supply of weapons. At the start of 1982, Poland delivered 250 T-72М tanks to Iraq. In the same year, Moscow decided to lift the embargo on arms supplies to Iraq. In total, during the years of the Iran-Iraq war, Baghdad received 1100 T-72 tanks, mainly of Polish production. After the war, Baghdad set up the release of a licensed version of the T-72М1 called the Babylonian Lion. However, many failed to release them, because the Iraqis could not start production of high-quality tank barrels.

The Soviet units were equipped with elite units that were under the command of the Iraqi Republican Guard: the 1-I Hammurabi tank division, the 2-I Medina, 3-I mechanized Tavacalna, 6-I mechanized division, Navohozon, NNWD-X. In addition, T-72 was armed with one division that was not part of the guard - 3-I tank division "Saladin".

The "seventy-twos" took part in all phases of the confrontation between Iraq and Iran. At the same time, the Iraqi command kept these tanks as the best weapons of the ground forces. The existing seventy-doubles park was used only on the most important areas.

According to some reports, the Iraqis lost around 60 T-72 and around 500 T-62 in the battles with Iranian troops. Some of these tanks were seized whole or poorly damaged, they were used already in the Iranian army. These tanks, the Iranian military set significantly higher than the main battle tanks of the British production "Chief." Although British tanks could hit Soviet tanks, their two-stroke diesel engines proved to be ill-equipped for operations in the desert region. In addition, heavy British main tanks, which had insufficient power density, significantly lost their mobility in Soviet-made tanks.

After the war, Iranian tank commander Adar Froorian called the T-72 the most formidable enemy on the battlefield. He reported that his car crashed twice due to hit T-72 shells. In the first case, the T-72 projectile hit the engine of his tank, and the crew had to leave the tank. Adar also noted the high maneuverability of the Iraqi "seventy-twenty", when the "Chieftainers" had to spend a lot of time for cooling due to insufficient engine power.

Iranian fighters recalled that if the old Soviet T-55 and T-62 tanks could have been hit from the grenade launcher in the forehead, then in order to hit the T-72 one had to “dodge”, to look for an opportunity to hit the board or the stern. “Capturing a serviceable T-72 tank was considered a great success. A real feat, ”noted the fighter of the Guardians of the Islamic Revolution.

After the war, Tehran, remembering the high combat qualities of the T-72, decided to buy a large batch of Russian tanks. Under license in 1993-2001. 300 T-72C was assembled. It was also bought a certain amount of T-72 in Poland and Belarus. In addition, on the basis of T-72 (Western technologies were also partially used), the Iranian main battle tank Zulfiqar was created. 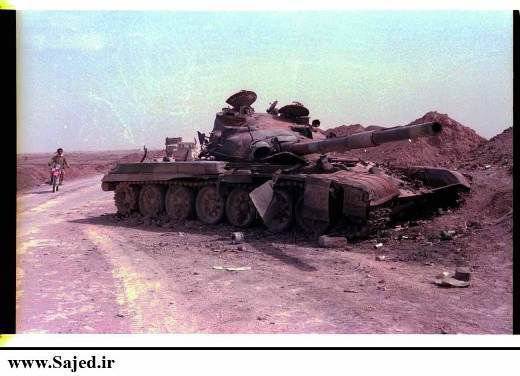 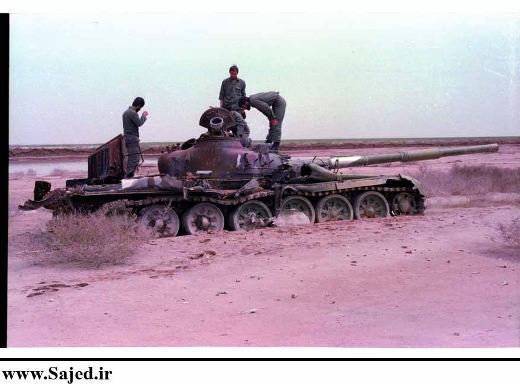 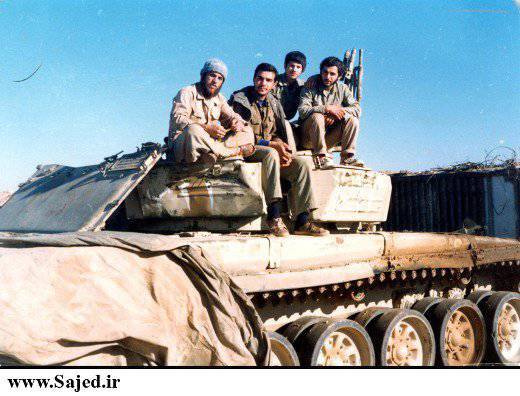 Ctrl Enter
Noticed oshЫbku Highlight text and press. Ctrl + Enter
We are
"Desert Storm". A quarter of a century ago, Saddam Hussein’s troops left KuwaitCompletion of the Iran-Iraq war. Features of the conflict
Military Reviewin Yandex News
Military Reviewin Google News
106 comments
Information
Dear reader, to leave comments on the publication, you must sign in.