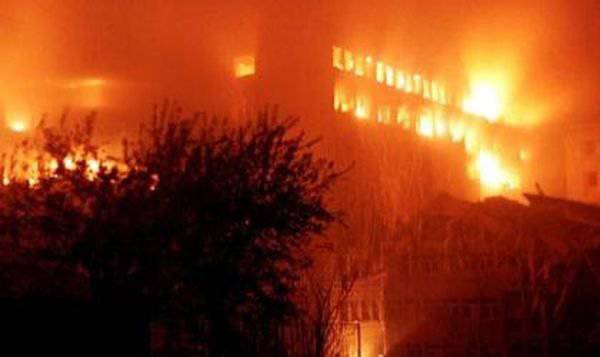 Today you can often hear that the world is on the verge of a third world war. Someone believes that it has already begun and calls it the 11 date of September 2001, when provocation was made in New York, which enabled the United States to invade Afghanistan under the false pretext of “fighting international terrorism”. They also point to an earlier starting point of the third world war - the NATO aggression against Yugoslavia in March 1999. What is happening in Ukraine today is what happened in Yugoslavia at the end of the twentieth century. The escalation of an undeclared third world war continues.

And the time comes to start preparing for the “new Potsdam”, bearing in mind that at the Potsdam Conference 1945, one of the main issues was the question of reparations for the destruction and damage caused to the Soviet Union and other countries subjected to fascist aggression.

At the Potsdam Conference, the Soviet delegation announced the figures of the damage suffered by the Soviet Union from the war. According to official data, the direct economic damage caused by the USSR amounted to 128 billion dollars, and the total damage - 357 billion dollars in prices and dollars 1939 of the year. For comparison: the assistance received by the Soviet Union under the Lend-Lease program for all the years of the war amounted to about $ 11 billion.

Preparation of a new account should be carried out in the form of an international “White Book”. It will become the international legal rationale for reparations, which will be entrusted to the aggressors - the United States and its NATO allies.

Some work on damage accounting of the third world war is already underway. For example, the Syrian government reported that by the end of 2013, the economic damage from military operations of the armed opposition (behind which Washington stands) had reached 144 billion dollars, equivalent to three years in Syria’s GDP. Probably, according to the results of 2014, the damage figures will be even greater.

After the NATO bombing of 1999 of the year in Yugoslavia, a three-volume White Book was prepared, but today the task of compiling the international White Book is becoming urgent, based on a unified methodology, with cross-use of experts and information from all interested countries. Reparations are usually understood to be compensations for damages that countries suffered from military operations. In modern conditions damages are caused not only by military actions. You should also take into account the damages from economic sanctions and blockades, subversive operations, information war and other forms of aggression. Constant monitoring of damages is necessary (such continuous monitoring was carried out by the Extraordinary State Commission in the Soviet Union during the Great Patriotic War).

The first head of the international “White Book” should be the account of Serbia as the first victim of the third world war.

The main part of the Serbian bill is damage from the military aggression of the United States and NATO, which lasted from March 24 to June 10, 1999. Let us recall the main figures. 35 military forces were committed against Yugoslavia. aviation sorties with 1000 aircraft and helicopters; more than 10000 cruise missiles were fired, 79000 tons of explosives were dropped (including 156 containers with 37440 cluster bombs prohibited by international law). Barbarian bombing raids were carried out using munitions containing poorly enriched uranium.

Direct material damage. During the NATO bombings, led by American General W. Clark, about 2 thousands were killed and more than 6 thousands of civilians in Yugoslavia were injured, about 50 factories and plants, 18 power plants, 34 bridge, 50 hospitals and polyclinics, 480 schools, technicians and universities. About 600 thousands of people lost their jobs. According to various estimates, the total amount of direct material damage ranges from 30 to 100 billion dollars.

Environmental damage. The most tangible consequences were caused by NATO strikes against the industrial complex in Pancevo: a nitrogen plant, a refinery and a petrochemical complex. Toxic chemicals and compounds got into the atmosphere, water and soil, which created a threat to human health and ecological systems throughout the Balkans. Air poisoning by poisonous fumes from burning oil refineries occurred, the Danube and the rest of the rivers were poisoned with oil from blasted tanks, and a number of lakes (Lake Skadar) and the Adriatic Sea were polluted. The Minister of Health of the Republic of Serbia, Leposawa Milicevic said: “Even Adolf Hitler did not bomb our chemical plants! NATO does this calmly, destroying rivers, poisoning the air, killing people, the country. Our people are being subjected to a brutal experiment using the latest weapons". As a result of the use of aerial bombs with dining uranium, vast territories were contaminated with radionuclides, and the incidence of cancer has increased markedly.

Indirect damage - losses associated with the shutdown of production, unemployment, loss of income. Losses of this kind were increased by the fact that after the 1999 bombing of the year, the country was subjected to marauding looting by Western companies, which bought the remaining assets for a penny. As a result, 2,5 million Serb citizens left without livelihoods. Unemployment in Serbia has reached the level of 40% of the working-age population. Only in 2014, the drop in production was 3,5%. Those who ruled Serbia after the 1999 aggression of the year did not have any country development program. Everything was aimed at getting Western "help." And she never materialized. Serbs simply tricked.

The indirect damage can be attributed to the losses incurred by countries neighboring Serbia, traditionally associated with its close economic relations. According to the London-based Economist Intelligence Unit, an authoritative analytical group dealing with the economy, the total damage to the countries neighboring Yugoslavia from the 1999 war was estimated at 8 billion. Here and direct financial losses, and a reduction in foreign investment, and a decrease in GNP from the economic embargo.

Until now, in the West, they didn’t even want to hear about at least partial compensation for Serbia’s damages from military aggression. Sometimes there were some amounts of Western economic assistance to Serbia, which allegedly was provided for the restoration of its destroyed economy, but all this is pure deception. The money that the US and the EU sent to Serbia in the form of “aid” was in fact the financial support of Western TNCs. The population of Serbia has not received any compensation.

In 2014, important changes began in world politics. In the context of these changes, Belgrade did not support the anti-Syrian resolution of the UN Security Council on Crimea, did not give in to the pressure of Washington, demanding to be connected to sanctions against Russia. Of great importance was the invitation of the President of the Russian Federation Vladimir Putin to celebrate the 70 anniversary of the liberation of Belgrade from the Nazi invaders 16 in October 2014.

It seems that official Serbia has already matured in order to start presenting accounts to the West for damages of the past two decades. Not very confident, but Belgrade has already begun to do this. In May, 2014, Serbian President Tomislav Nikolic, told the UN Security Council that he was counting on compensation for damage from 78-day NATO bombings in 1999. "I do not complain and do not ask for compensation payments for the war in the classical sense, but as long as I am the President of Serbia, I remind you of your obligations to compensate us for the enormous and irreparable damage caused to our civilian objects and the economy as a whole," Nikolic said at a Security Council meeting. UN. The damage is estimated in tens of billions of dollars.

In modern conditions, compensation requirements may become an important tool of foreign policy. In 1922, at the Genoa Conference, the West tried to bring Soviet Russia to its knees, demanding that it pay debts on loans from the tsarist and provisional governments in the amount of 18,5 billion evils. rub. However, Moscow issued to the former allies on the Entente a counter bill for the damage caused by the intervention and economic blockade in the amount of 39 billion evils. rub. This moderated the greed of the "partners" of Russia. Compensation requirements played a significant role in the fact that two years after Genoa, a strip of diplomatic confessions of the Soviet state began. It is useful to learn from this experience. Money arguments always reach the West more quickly than appeals for equality, fairness or human rights.