Kazakhstan in the face of a terrorist threat 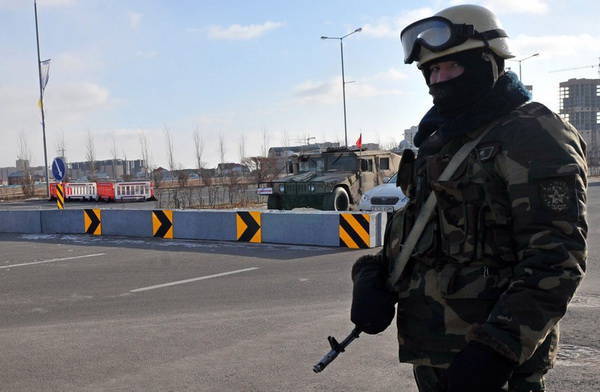 Kazakhstan, which for a long time was considered the most peaceful republic of Central Asia, has recently been faced with the growing activity of Islamic radicals.

Last year, two cases were recorded that can be classified as manifestations of terrorist activity. At the beginning of 2010, at the Kandyagach station, a group of militants of the Ansar Ud-Din jamaat attacked the militarized guard service of the railways of the Aktobe region, capturing weapon and radio communications. In June, a group of 21 prisoners escaped from a strict regime colony near the city of Aktau, during which they were supported from outside. Of the two vehicles that approached the colony, fire was opened to protect, one conscript soldier was injured. A few days later, those who escaped were found in the steppes, where, according to the official version, fifteen of them were killed by special forces, and on the other they blew themselves up.

This year, the number of such incidents has increased markedly. February 25 explosion occurred near the detention center of Aktobe. A car, which blew up almost immediately, was thrown from a car that arrived at the gates of the SIZO. In the isolation ward there were several accused of preparing a terrorist act, whose leader had previously been found dead. On the night of March 14, an explosion occurred in the small town of Issyk located not far from Almaty, the victims of which were two young men and a severely injured girl. 4 April in Alma-Ata, special forces tried to storm the apartment in which three accused of several killing of extremists were imprisoned. One of them managed to capture alive, two others blew themselves up with grenades. Eleven soldiers of the special forces "Sunkar" were injured.

17 May was a terrorist attack in the management of the National Security Committee of Aktobe. A man entered the building, who almost immediately blew himself up. He himself died immediately, four more people were injured. The dead was 25-year-old Rakhimzhan Makatov, a dombrist musician, who has three daughters, parents and younger brother. According to Kazakh media, in the regional center Shubarkuduk, where R. Makatov’s wife is from, there are quite a few Salafi.

On May 24, a car with explosives exploded at the detention facility of the National Security Committee of Astana, the driver and the passenger of the car were killed. The Ministry of Internal Affairs of Kazakhstan stated that the explosion happened by chance, and the explosives were brought to Astana, possibly for sale. However, according to the Kazakh newspaper Vremya, one of those killed during the explosion, 34-year-old resident of Pavlodar region Sergey Podkosov, recently released from prison, became a supporter of radical Islam several years ago. After his release, he specifically settled on a mining enterprise in order to gain access to explosives. The purpose of his visit to Astana was the explosion of the building of the central office of the National Security Committee, and the explosion at the remand prison occurred due to a technical error.

In July, Western Kazakhstan again became the "center of terrorist activity". In early July, in the village of Shubarshi in the Aktobe region, members of the local Salafi community, in revenge for the detention of their comrade, a 22-year-old resident of the village of Talgat Shakanov, shot two policemen. During the operation to prosecute them, the Kazakh security forces were ambushed, and a special forces soldier was killed. After that, a large-scale military operation began in the Aktobe region involving heavy armored vehicles, aviation, special units of the Ministry of Internal Affairs of Kazakhstan "Sunkar" and "Golden Eagle". 9 of 11 Salafis were later discovered and eliminated in one of the houses of the village of Kenkiyak, where they defended all night. During the assault, one commando was killed.

On the night of 10 on 11 July, there was a massive escape of prisoners in the AK-159 / 21 colony, located in the city of Balkhash, Karaganda Oblast of the Republic. 16 prisoners, using firearms, attacked the guards and killed one policeman. They did not manage to get out of the fence, as the automatics worked in the colony and all exits were blocked. Those fleeing took refuge in the industrial zone, and after the special forces arrived, they blew themselves up with an oxygen cylinder and they all died. Kazakhstani media sees in these events an “Islamic trace,” considering the fact of the self-explosion of such a large group of people at least strange and not typical of ordinary prisoners. According to their data, the escape from the colony was led by a mullah-salafit convicted for extremism from Karaganda, influenced by prisoners. Moreover, in the industrial zone adjacent to the Balkhash colony a whole community of Salafis settled.

The May – July explosions in Aktyubinsk and Astana, the operation to eliminate extremists in the Temir district of the Aktobe region and the rebellion in the Balkhash colony indicate that the situation is worsening ... The scale of the problem is evidenced by the fact that during operational activities carried out after armed clashes in the Aktobe region, only in Astana, 66 people were registered on suspicion of involvement in extremist activities. “There were no active actions on their part, if we did, we would have brought them (to responsibility),” said Talgat Jumanov, deputy head of the investigation department of the Department of Internal Affairs of the city. “They are just learning, someone will bend them.” According to the police, extremist literature was found in the detainees. It can be assumed that the number of adherents of radical Muslim movements that were not in the sight of Kazakhstani security officials is much higher.

Some Russian media explain the increase in terrorist activity in Western Kazakhstan by its proximity to the Russian North Caucasus. The Internet publication Free Press, for example, notes that Aktyubinsk (Kazakh. Aktobe) is located near the border with Russia, which is practically absent here. Caucasian fighters, primarily from Dagestan, who in fact have turned Western Kazakhstan into their rear base in recent years, actively use the transparency of the borders. They are not only treated and have a rest in this region, but, according to an unnamed source in the National Security Committee of Kazakhstan, they even took courses near Aktyubinsk. Local authorities tried not to pay attention to it, in exchange for which the North Caucasian militants refused to carry out terrorist attacks in Kazakhstan.

However, the growing influence of Islam in Kazakhstan has an internal nature. “Not long ago, on the streets of large cities of Kazakhstan,” notes Deutsche Welle, “it was practically impossible, for example, to meet a woman wearing a hijab. Today Islam takes up more and more space in the daily life of Kazakhstan. ” Women in traditional Muslim clothing on the streets of the cities have become commonplace today. Without the invitation of imams or mullahs, today not a single more or less significant public event takes place. Moreover, currents not only of the traditional Hanafi sense for Central Asia became widespread in the republic. Recently, observers have noted an increase in the interest of Kazakhstanis in the unconventional areas of Islam, especially in South and West Kazakhstan, where the Kazakh population predominates. Among the imams of Kazakh mosques there are, in particular, Salafis and Koranites.

Exacerbation of the situation in such conditions is almost inevitable. As the number of supporters of radical Muslim movements grows, their struggle against secular regimes moves from the religious-ideological to the military-political plane.

We are in Yandex Zen
Who is it NATO? Talk about the American military base in the port of Aktau - the purest fantasy
2 comments
Information
Dear reader, to leave comments on the publication, you must to register.