August 25 2014
73
I am sending an article to the readers, which I collected from my thoughts and Internet sources in order to analyze why so much blood is shed in Ukraine.

Strictly speaking, everything is clear with Iraq, Syria, these countries possessing huge reserves of oil and gas, geographically located very conveniently for the supply of energy resources to the countries of Western Europe, do not possess nuclear weapons and although they have a strong army by local standards, they are not enough to counter Western expansion. These countries can be bombed by the West, contribute to the spread of radical Islam there, that is, to exclude the possibility of establishing strong leaders in them - such as Saddam Hussein in Iraq, Muammar Gaddafi in Libya, Bashar Asad, who is currently Syrian president.

Now back to Ukraine. What attracted Ukraine to the European Union and the United States at the present time?

Ukraine is interesting to the European Union, first of all, with its sales market, and also with the possibility of transit of cheap goods to Russia. Until recently, Russia and Ukraine had a fairly preferential regime of commodity circulation, transparent borders, and, in fact, fairly close economic ties.

The EU has drawn Ukraine into its association to meet its economic needs.

Although Russia frowned, she agreed with this turn of events, but offered to sit down at the negotiating table in order to remove particularly acute problems of an economic nature, to minimize the economic damage from this agreement. The answer was received categorically: NO.

I think at that moment the United States was already involved in the game, even though they were already in the role of a “playing coach.”

So now what has Ukraine attracted to the USA?

Energy. The US is sleeping and seeing how they will supply oil and gas to the European market, weakening Russia's economic position and strengthening its own. But even according to statements by Washington officials, energy supplies to Europe can take place no earlier than 2020 of the year (optimistic forecast), and this is unacceptable for US geopolitics, since the energy market must be seized now.

According to the conclusion of US officials, Ukraine is the very energy resource that could largely replace Russian gas and oil for deliveries to Europe, since the world's largest gas transportation system is located in this camp.

A bit of economy, taken from Internet resources.

As of 2010, the proven reserves of oil in Ukraine are approximately 395 million barrels (54 million tons). 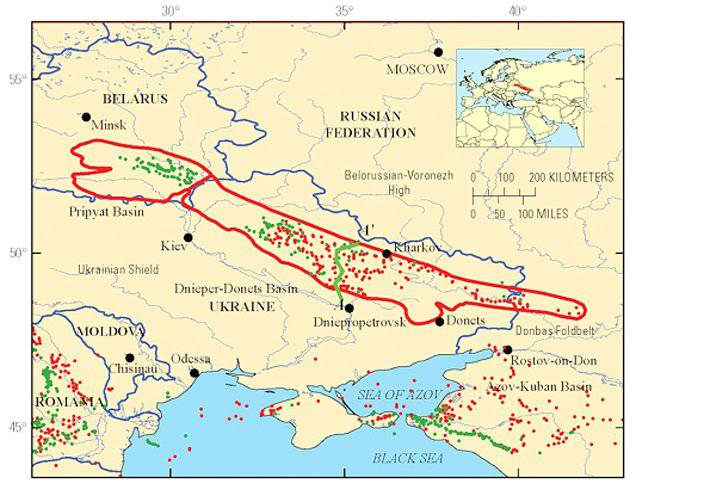 Another source. Oil and gas fields of Ukraine. 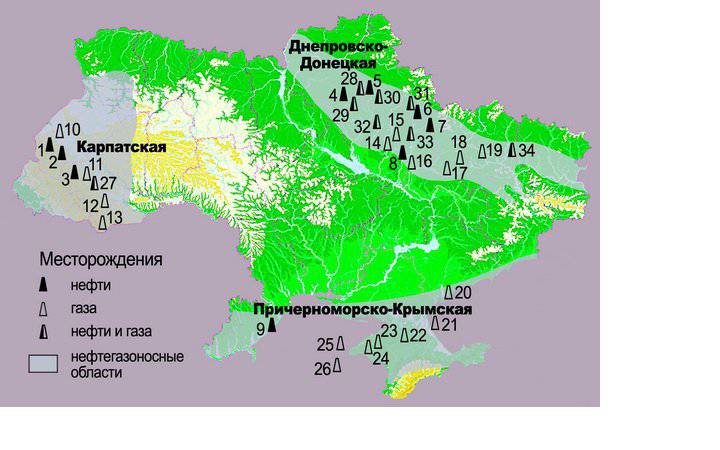 About the Crimea. Source: http://www.photoukraine.com/Russian/articles?id=111.

“Significant natural gas deposits have been discovered in the south of the country, in the flat part of the Crimean peninsula and adjacent areas of the Black Sea and Azov Sea shelf. The Glebov-Simferopol-Sevastopol gas pipeline was built with a branch to Yalta, Evpatoria and Sakam.
According to some experts, Ukraine has large promising areas where it is possible to discover hydrocarbon deposits (especially gas) on a global scale. First of all, such assumptions and hopes (of the world's largest reserves of natural gas) refer to the northern (Ukrainian) part of the Black Sea shelf. As one of the arguments, the fact is given that the Black Sea is the only sea water body in the world where the water column from the bottom to the depths of 150-50 m is filled with hydrogen sulfide. It is surmised that a huge amount of natural gas has accumulated under the bottom of the sea, which passes along faults to the water and saturates it, and the matter is only small — to learn how to extract it from there. ”

It can be concluded that the United States is fighting for a very significant energy jackpot.

The Crimea, and no one will be able to deny it, is the territory of Russia, and it is possible to “squeeze” it back only through the Third World War. The United States and the European Union are well aware of this, and therefore there is such a station howl.

For the East of Ukraine there is a bloody struggle with an unknown result for any of the parties, I mean the West and Russia, but I think that Russia will win the victory in this conflict of interests.

In the bottom line, we have the following. Europe has lost a huge Russian market, which the Asian and Latin American countries will fill with pleasure. Under the threat of energy supply, and, as a consequence, the energy collapse in Europe. But I think this will not happen.

But their main task (the seizure of the energy market) and beyond the entire world economy, they did not fulfill and are unlikely to fulfill. But the struggle, and very cruel, continues, and who will be the winner, time will tell ...