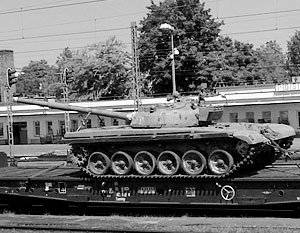 Ukraine continues to demand from the West not only financial, but also direct military assistance. However, despite recent reports of strange shipments tanks T-72 Ukraine from Hungary, the West is clearly not eager to give Ukraine something more dangerous than dry rations and tents. What is the reason for this behavior, the newspaper LOOKED.

The appeal of the Foreign Minister of Kiev to the West with a request to provide direct military assistance did not find sympathy, despite the fact that the United States and the command of NATO allowed individual countries to independently choose the form of military-technical assistance to Ukraine. It is unlikely that the statement of the Verkhovna Rada Oleksandr Turchinov’s statement that “the time has come when Ukraine needs not only moral but also military assistance” will find a response.

“Bulgarian mines, for example, have a tendency not to explode, but for some reason screw into the asphalt at the most stabilizer. And Bulgaria is one of the largest suppliers of this stuff. ”

At the moment, state supplies of Western countries to Ukraine in the military area were limited only to military equipment - body armor, helmets, dry rations, tents, and so on. Arms shipments are not officially excluded, but there are many signs suggesting that this is still unlikely to happen.

The "large" countries are demonstratively unwilling to get drawn into the war in this way. But the "new Europeans" formally preferred to remain silent, although it was with them that the basic hopes of Kiev were connected. There was already documented evidence of the use of ammunition from old Polish stocks by Ukrainian troops. Moreover, the reserves are really so old that even humanitarian aid could not be calculated. But previously, Eastern European countries were repeatedly seen in trade in arsenals left over from the Warsaw Pact. Including, for example, to Georgia during the conflict in South Ossetia in 2004 and before the 2008 war. And Ukraine itself (both the state and individual citizens) behaved exactly the same way, and on a larger scale - which ultimately led to the complete depletion of the country's military-technical resource. And now, when the main mass of Ukrainian armored vehicles and aviation practically ceased to exist, Kiev can only hope for a reciprocal courtesy from its Western "fans".

The direct catalyst for the sale of Ukraine weapons from the old stocks of the former Warsaw Pact countries served as a strange история in Hungary, when local bloggers photographed a train with T-72 tanks moving by rail towards Ukraine. Moreover, it is Ukraine, since there is simply nowhere to roll there - as a result, the rails rest against the Zakhon border point (he is Ukrainian Chop). It quickly became clear that these are really Hungarian tanks, which the Hungarian Ministry of Defense quite legally sold through a tender (No. S14N08) to a certain company Excalibur Defense KFT (kft is in our LLC). This company is registered in Székesfehérvár, on Bakon street, 4 house with an authorized capital of 500 000 forint. In the column "profit" for 2013, the year in its reporting is round zero. There is evidence that several Czech citizens are its founders.

The Hungarian public in this story was not worried about the fact of selling somewhere (and so it is clear that the only neighboring country, which they may even need - Ukraine) of old tanks, but the price received for them. The structural unit of the Hungarian Ministry of Defense, which was responsible for the tender, helped the phantom company 22 million 40 thousand forints from the sale of the first batch (200 tank), that is, in fact, at the price of scrap metal. In total, the Excalibur received 58 tanks at a price that was a hundred times less than even the market, but the selling price. In this case, the photo clearly shows that the tanks have undergone pre-training. They are newly painted and almost polished. This somehow did not fit in with the appearance in the Czech press of a certain representative of Excalibur, Andrei Chirtek, who stated that the tanks had been bought from the Hungarian Ministry of Defense for their further "disassembly".

Everyone was surprised by the route along which the tanks moved through Hungary - in the opposite direction from the Czech Republic. The Ministry of Defense explained this by “logistics” - from the base in Kaloche, the train was moving through Nyiregyhaza, where it was photographed, to another base - in Nyirtelek - to perform some formalities. That is, the principle of “digging a ditch from fence to dinner” still works smoothly in the Hungarian army, despite all NATO standards. And why re-paint what is intended to become scrap metal?

The same company won the second tender for the purchase of 24 MIG-29, which cannot be named as scrap metal. Not to mention the helicopters. And all this with delivery until the end of August. In this case, from the formal side, everything seems to be normal. Tenders were announced in advance, there are references to the relevant Hungarian regulatory documentation and other "European standards".

This scheme is nothing new. The Hungarian government does not want to openly deliver heavy weapons to Ukraine. But it is absolutely not against earning an extra five kopecks on the old trash, selling it to civilian middlemen-adventurers from another country. And what will they do with this further? Budapest has nothing to do with it. An old circus trick. Yes, it seems improper to supply tanks there, and in general our political position is opposite, but the door will be slightly ajar. And 5% translate, please, at the expense of some company "Swindlers and Spies Inc." in Liechtenstein. Moreover, the profits of lovely gentlemen from the Czech Republic will amount to an astronomical amount, since Kiev in general doesn’t care how much to pay - this is essentially American money.

A tiny little detail has added extra fun to the whole story. The site Hidfo.net, on which photos of a tank train at the Nyiregyhaz station appeared from an anonymous user, was founded in 2012, and its slogan is Igazság hangja Magyarországban (“Sound of Truth in Hungary”). But at the time of its first launch, an inscription appeared in Cyrillic on the screen: “News the portal has been launched. ” The inscription disappeared after a couple of minutes, but the residue remained.

Calculate the real losses of the Ukrainian army in the New Russia is impossible. But if 35 is already downed from 29 MIG-33, then who and what is flying there? It is reasonable to assume that low-grade aircraft or those that were previously in illegal or semi-legal "leasing" in other parts of the world were launched. Ukraine returned from Africa all its helicopters that were there as part of the UN peacekeeping missions, forgetting to repaint the symbolism. Last year, a dozen Ukrainian MI-8s were transferred for conversion to Croatia, in which they were stuck due to the fact that spare parts for them were located in Sevastopol. Now, a delegation of US senators and generals is demanding that the Croats return the helicopters to Ukraine, promising to hand over their used (7–8 years of service) American turntables to Zagreb.

It is unrealistic to even assess the state in which the Ukrainian army was at the time of the outbreak of hostilities. Even it is impossible to proceed from official figures, since most of the warehouse reports for more than twenty years of theft and manipulation were simply falsified many times. Even if a certain tank was recorded on paper, and, moreover, it was in reality, it is not a fact that there was a battery, for example. Most likely, Kiev itself has a rather superficial idea of ​​its military power, but there is no time to carry out an inventory.

It is believed that European countries are limited to the Arms Trade Code of Conduct of 8 June 1998 and the International Convention on the Principles of the Arms Trade. It was to these documents that the Russian Foreign Ministry referred in its note about the Hungarian tanks delivered to Ukraine. But, first, the convention has not yet been ratified by anyone, and the Code of Conduct is a pleasant and touching set of words that Greenpeace and other extreme pacifists like to operate with. It is not even worth the paper on which it is printed. And the arms trade is such a wonderful area of ​​human activity, in which there is always an Excalibur company registered in a private house on the outskirts of the ancient capital of the Huns without signs of economic activity.

But it's all dead poultices. Neither Eastern Europe nor NATO as a whole will transfer to Ukraine such types of weapons that could critically affect the course of hostilities in Novorossia. Not only is it politically dangerous, it is also impractical and meaningless. The course of hostilities itself does not provide for a tactical superiority of the Ukrainian army at the expense of some fundamentally new types of weapons. Even the drones that are so dear to the heart of Barack Obama are knocked down by bundles. And simply building firepower is a two-edged process. And while he is not in favor of the armed forces of Ukraine. Kharkiv tank factory and so works in three shifts, repairing what could crawl out of the battlefield.

In addition, the quality, for example, of ammunition from the ancient stocks of the Warsaw Pact, to put it mildly, is no longer the best. Bulgarian mines, for example, tend not to explode, but for some reason screw into the asphalt at the most stabilizer. And Bulgaria is one of the largest suppliers of this trash. Prague, on the other hand, is one of the European leaders in the production of armaments and has long been firmly established (along with Budapest) into an informal center for illegal arms trade, and all these chains are controlled by dozens of foreign intelligence agencies and specialized agencies. And sooner or later, some of these chains will open up with great noise.

Backstage deliveries to Kiev of sub-standard equipment and ammunition of the old nomenclature can only delay the course of the war for some time. In this case, the responsibility for the death of people falls on the suppliers, but, as we can see from the example of Hungary, the state and politicians prefer not to participate directly in the arms trade process. And the conscience of a private person is a twilight thing. This, of course, is not the first or the last case, providing a wide field for the activities of numerous intelligence services and counterintelligence and the sudden enrichment of adventurers. But the war will ever end, the adventurers will be caught in the Danube, and it will turn out that all this was useless.