Drone with a toilet and the secret development of Ukrainian scientists 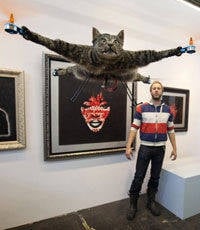 The Central Election Commission pretended to have calculated the 100% of electoral protocols. Oddly enough, Petro Poroshenko won with a result of 54,7% of votes. The figures are fully consistent with the data of the national exit poll. Literally a little thing in a little thing, and this, notice, is not the sexual act of the Lilliputians. In my memory, this is the first case when the data of sociological polls fully coincided with the results of voting


There is usually a discrepancy in 5-10%. There are such concepts as sampling error, the behavior of respondents who refused to answer questions, or deliberately concealed who they voted for. According to field sociologists, the cases of refusals during the May elections were almost 50%. Plus, add here the obviously inadequate data from the southeast, where no sociological office currently has a representative sample. Moreover, they themselves admit that they could not conduct a poll of voters at the exit. However, these difficult conditions did not prevent the aces of sociology, fed on high-calorie grants from the EU, to give an exact result. The CEC only needed to adjust it to its calculation. At the same time, no one cares that the server of the Central Election Commission was hacked, anyone could admire the “results” of the will on the CEC official page, according to which Dmitry Yarosh was far ahead of Pyotr Alekseevich. Hence the conclusion: in the new political conditions, after the start of European integration into the sexual majority of the EU (special thanks to Lyashko), the need for holding costly elections has practically disappeared. There is also no need to use a video surveillance system for voting, since everything is now fair, transparent and extremely, extremely democratic.

The following conclusion is closely related to the announcement of official results: in Slavyansk and Kramatorsk the next, I do not know what qualification (active, final, critical), ATO phase has begun. Here are many wondered: will Kiev risk using Grad multiple launch rocket launchers that destroy everything living in a radius of many kilometers? Could this be evidence of war crimes? After it was applied in Donetsk aviation, doubts have disappeared. Yes, multiple launch rocket systems operate in Slavyansk. As it was in Abkhazia. The same handwriting, the same methods. Aviation shells residential areas with unguided missiles, bombing. Of course, the militants who provoked the shelling from Gradov are to blame.

The version that the Kiev authorities are struggling to completely clean up the rebellious region to the inauguration of the new president, is confirmed. The anti-terrorist operation goes haphazardly, because they are trying to repel the Donetsk airport, which is not currently of special military value, then they are launching another assault on Slavyansk. It is absolutely obvious that all moral restraints have been removed: aviation and Grad installations are already agony. Of course, the "license" to kill civilians has already been received. It remains only to show the result. It is somewhat problematic to level Donetsk with the land (according to the estimates of the leaders of the ATO), but if you take a relatively small item, you can try.

Apparently, the government is hysterical, because at night in Lugansk they disarmed the soldiers of one of the military units. According to the Ministry of Defense, the National Guard under valiantly fought off an assault attempt, inflicting insurmountable losses on the militants. Then a video appeared, in which it is clear that a shirtless man (for everyone to see - without weapons) together with the woman withdraw the frightened soldiers. Take them out of the trenches, saying: "Take off, son, this garbage (body armor), do not be afraid, let's go." About a hundred conscripts left their weapons and returned home. Therefore, the press center of the Ministry of Defense issued a new version: during a grueling battle, the militants, hiding behind a human shield of women and children, penetrated the location of the military unit and seized the first floor. About conscripts who were sent home, not a word. But there was a perfect unique press release about the Russian UAV shot down by the National Guard. It was like this: on one of the checkpoints were the valiant Ukrainian military, who were constantly keeping watch. And suddenly they hear: zhzhzhzhzhzh! “This is not just zhzhzhzh!”, - decided the most intelligent of them and ordered to prepare for battle “high-tech weapons, developed by Ukrainian scientists.” By golly, I'm not lying! So it is written in "Interfax-Ukraine". At each checkpoint, patriotic volunteers have high-tech weapons, whose parameters are classified. It is only known that extremely durable rubber is used, which is stretched by a meter, and a special ball of depleted uranium, capable of striking to horror any unmanned vehicle.

In general, in order to demonstrate to the highest leadership unprecedented successes in the struggle against the remnants of a multimillion-strong gang of terrorists and separatists, they have already launched a “high-tech weapon”. So, moreover, on the downed drone there was a vessel with a clearly chemical substance, which, presumably, has a neuro-paralytic effect. This is even more awesome than the colonel of the GRU with a certificate and a plan of terrorist acts, detained by the Ukrainian secret service during the mining of a military facility.

As always, during the turmoil information comes the most controversial. The press center of the ATO talks about some Russian weapons that the National Guard men gathered at the Donetsk airport. At the same time, the airport itself is under the control of the resistance forces. When and what national guardsmen gathered is not clear. But, of course, the serial numbers on the machines of the legendary “100th series” fully correspond to the personalities of Chechen militants, since they coincide with the numbers of their passports. In social networks they talk about the Kiev "Berkut", who on the way to Donetsk disarmed the "pravoseks" accompanying him and switched to the side of Novorossia. The picture will clear up in the coming hours.