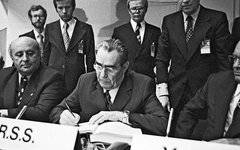 The question is whether the leadership of Russia will be able to draw conclusions from this lesson.


Perhaps participation in the Helsinki Conference on Security and Cooperation in Europe, or in any case, the signing of its Final Act, was a strategic mistake of the Soviet leadership.

And the matter is not only in the ill-conceived acceptance of the “third package”, which formally allowed for “the freedom to disseminate information,” and practically made it possible to demand freedom for essentially disruptive propaganda on the territory of the USSR and its allies. Although the idea of ​​“the freedom to disseminate ideas” was in itself rejected by the USSR as early as the end of the 1940-s when discussing the draft “Universal Declaration of Human Rights”.

Speaking of freedom, “the freedom to seek, receive and impart information and ideas by any means and regardless of state borders,” the representative of the USSR, who was the notorious Andrei Vyshinsky, then formulated the position of the USSR as follows: “the first drawback of this article is that it proclaims freedom in general, freedom to disseminate "information and other ideas."

And then he said: “What ideas can be distributed freely and without hindrance? Most of the committee answers this question - all sorts of ideas. The Soviet delegation answers this question: We cannot recognize this, for the “ideas” of fascism, racial hatred, national hatred, sowing hostility between peoples, incitement to a new war — we consider it impossible to spread such ideas, we cannot allow such “freedom” . ...

... Of course, you are the majority at the Assembly. But the time will come, and perhaps the majority will see that it has made a big mistake. But we, who are in the minority, do not want, cannot and do not dare to make such mistakes. Our duty to our people obliges us to disagree with the question that we see in the draft of the third committee, because the terrible pictures of the just past war are restored in our minds, during which thousands and thousands, tens of thousands, hundreds of thousands and millions of our brothers perished at the hands of the fascist executioners, who enjoyed the freedom to spread their murderous and villainous so-called “ideas” in some countries without restriction and without hindrance. ”

Much, by the way, looks very relevant here. And the word “Freedom”, quoted in quotes and reproduced now in the name of the neo-Nazi party, which is currently sitting in a Kiev parody of parliament. And a reminder of the torchlight processions that end this freedom. Both blood and fires spread throughout the USSR after he revised his position in 1975.

But the strategic mistake was different. An international conference on the post-war world order was to meet in September 1945. This was the decision of the Potsdam Conference. The latter was going to after the victory over Germany - but before the end of the Second World War and before the victory over Japan. The United States at this point depended on whether it would help them in the war in the Far East and the Pacific Ocean - or not.

By September, assistance was provided, the victory was won, and Truman chose to give up legal obligations for his obligations. But he did not seek to revise them - in particular, because the course of events in the battles against Japan once again demonstrated, to put it mildly, the extremely different combat capability of the Soviet and American troops. And also because he feared the high popularity of the European Communist Parties.

Potsdam defined the formats of the world order, roughly reflecting the relatively equilibrium balance of forces between the USA and the USSR.

The idea of ​​holding such a conference was returned to the 1965 year, when it was put forward by the Warsaw Pact member countries, and it took another ten years for it to be assembled.

Its main content was in “finishing up the affairs of Potsdam” - consolidating the situation that emerged in 1945. But by that time the balance of forces had changed dramatically: in the 1945 year, the USSR bore the burden of post-war devastation, did not have atomic power. weapons, lost millions of soldiers, the United States was enriched by the war, divided the aura of liberators from Hitlerism, had an atomic bomb.

In 1975, the USSR was almost at the peak of power, reached parity in the field of nuclear weapons, survived its most successful eighth five-year plan, led the offensive on all continents, defeated the army. United States in Vietnam.

The United States experienced a severe social and economic crisis, was in a state of moral and psychological depression, experienced a “Vietnamese syndrome”, the authority of the authorities and national parties fell extremely low, and the country was shaking from political and economic scandals, rising prices, inflation and unemployment. Their economy was even richer - but in fact at the same time less powerful than the economy of the USSR.

The authority of the United States in the world rolled down and even their allies, France and Germany, ceased to be reckoned with them. Increased trade wars with Japan. There was widespread rejection of American politics.

The economy of the USSR, maintaining a not very high, but fairly decent level of the well-being of citizens (the era of growing deficit was still ahead) - fed and armed half of humanity. The US economy was weakening even using the resources of the other half and feeding on the light of the latter.

The USSR was on the rise - the US was on the way down. The USSR was increasingly becoming the dominant country in the world, the winner already in the post-war confrontation - the United States is losing dominance by the country losing this confrontation.

Aviation USA in Korea. Vietnam and the Middle East have demonstrated their backlog from the Soviet one and their defenselessness against Soviet air defense. American aircraft carriers sailed around the oceans in the sight of Soviet launchers. Troops stationed in Western Europe had little chance of keeping Soviet tank the offensive is longer than three days in its movement to the English Channel. The United States constantly initiated new rounds of the arms race - and constantly lost them.

The balance of forces changed in favor of the USSR, but its leadership was not focused on winning, but on maintaining the status quo. And the meaning of Helsinki was not seen in bringing the world order in line with the new balance of power, but in confirming the formats that corresponded to the balance of power of the 1945 of the year.

By the policy of "detente" and the Helsinki Accords, the USSR gave its Western competitors a breather. And he confirmed in relations with them the formats of equality and equivalence - although they were no longer such.

- either the Soviet leadership itself did not realize how much the system they represented was already superior in strength to a competitor;
- either believed that the victory had already been achieved and it was possible to give the vanquished to die quietly at home;
- Either the tiredness and the aging of the top of the Soviet leadership, who were under seventy by all, just had an effect;
- Either Brezhnev, very much wanted to look in the eyes of the international community "an outstanding fighter for peace."

Anyway, this competitor’s respite allowed him to at least avoid death — and go on the offensive in 1980.

In fact, even if the Helsinki Conference was to be assembled, it was necessary to determine the conditions of detente and the course towards “security and cooperation”.

And this should have been the first to assume:

- The first is the dissolution of NATO or at least its military organization;
- the second is the withdrawal of all American troops from the territory of Europe and the territories close to the USSR borders;
- the third - the removal of any restrictions on the supply to the USSR of industrial products and technologies.

Some would call it utopia, but utopia is often the most prematurely revealed truth. US 1975 of the year was neither US 1945 of the year nor US 1995 of the year. It was something like the USSR 1990-th year.

And at this moment European countries would enthusiastically agree to accept the status of neutral or at least non-bloc countries in exchange for guarantees of their national sovereignty by the USSR.

Moreover, it has not yet become clear to everyone, but sooner or later it will become clear that, despite the situation at the beginning of the 21 century, Russia can count on a dignified existence and development only if NATO and the EU cease to exist.

And whatever Russia is socialist or imperialistic, and no matter how it is called, it has no other way to the future than through solving the tasks that the Soviet Union could solve but did not solve in 1970-s.

In Europe, there can be either Russia - or NATO and the EU.

Ctrl Enter
Noticed oshЫbku Highlight text and press. Ctrl + Enter
We are
Diplomats of the People's Commissariat of Defense: on the eve and during the warSoviet strategic planning on the eve of World War II. Part of 5. Battle of Bulgaria
Military Reviewin Yandex News
Military Reviewin Google News
33 comments
Information
Dear reader, to leave comments on the publication, you must sign in.