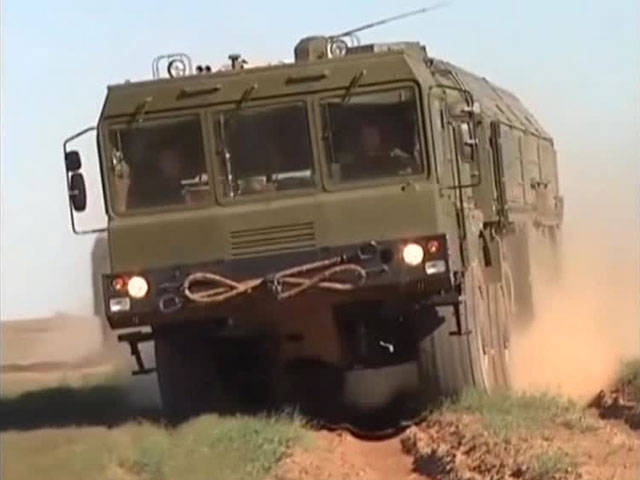 Vladimir Putin showed his colleagues from the CSTO countries how the most formidable acts weaponwhich is at the disposal of this organization. At the command of the Russian president, the military carried out training launches of the Topol and Bulava intercontinental ballistic missiles. The army today was practicing reflection and nuclear strikes, and this is only part of large-scale military exercises, the purpose of which is to test the troop control system.
The newly created National Control Center is the brain of defense of the Russian Federation. Information from forty ministries and departments of the country, including the Ministry of Internal Affairs, Federal Security Service, Ministry of Emergency Situations, up to Oboronzakaz flows here. This time, not soldiers and officers operating in the field, not commanding troops, but the entire defense management system of the country in repulsing a potential enemy’s global attack were subjected to a routine check.
"Today, on the eve of the holiday 9 of May, Victory Day, and in connection with the CSTO summit, we are conducting a readiness check of the Armed Forces of the Russian Federation. We are conducting exercises. Instructions on the preparation of these events were formulated as early as November last year. Today all types and types of the Armed Forces of the Russian Federation throughout the country, including nuclear deterrence forces. I ask the Minister of Defense to report readiness, "said Vladimir Putin.
Russian Defense Minister Sergei Shoigu reported to the head of state: "Comrade Supreme Commander-in-Chief, in accordance with the plan for the preparation of the Armed Forces, training is being conducted today on command and control of the troops, with the development of their practical actions. The training involves forces and equipment of all military districts, strategic missile forces, troops aerospace defense and long-range command aviation. This event is one of the important stages of the preparation of the armed forces in 2014, and is carried out in accordance with your instruction given six months ago. "
Missile forces and artillery of the Central Military District, this is Moscow and the Urals, destroyed the convoys, command posts, and positions of the conditional enemy.
“You are observing a fire attack with a volley of the Uragan rocket launcher,” commented Nikolai Bogdanovsky, commander of the Central Military District. to 36 hectares, which makes it possible to defeat enemy targets such as a company strongpoint or an artillery division in a firing position. "
The volley fire systems "Grad" operate at the Chebarkul training ground. The firing results were delivered to the National Control Center in real time.
"The area of ​​destruction by one launcher up to 3,5 hectares. Volley time is up to 20 seconds, missiles are equipped with high-explosive or incendiary smoke heads," Bogdanovsky added.
In the area of ​​responsibility of the Southern Military District, at the Ashuluk training ground, the air defense forces reflected a massive air strike of a conditional enemy. “For destruction of“ Kaban ”targets imitating the flight of ballistic missiles flying at speeds above 400 meters per second at altitudes up to 40 kilometers, the C-300, PM-1 anti-missile division, which can destroy this type of target for - distance to 200 kilometers. This system also has the ability to hit modern and promising cruise missiles of the enemy, - said the commander of the troops of the Southern Military District, Alexander Galkin.
There, in the South, at the Kapustin Yar proving ground, the operational-tactical missile systems Iskander-M destroyed areas of concentration of the likely enemy.
In the waters of the Barents and Okhotsk seas, strategic submarines “Tula” and “Podolsk” were launched from the underwater position. They launched the Bulava ballistic missiles. For the destruction of ground forces conditional enemy. The National Center received information: all missile heads arrived at the appointed time at the Chizha range in northern Russia at the appointed time.
At the proving ground of Priozersk, in the Republic of Kazakhstan, air defense and aerospace defense troops repelled a conventional massive nuclear missile attack. And from the Plesetsk cosmodrome, the Topol intercontinental ballistic missile was launched, and it hit the target at the Kura range in Kamchatka. The strategic missile carrier Tu-95 launched six cruise missiles at ground targets and also hit targets imitating key targets of a conditional enemy. And all these were only fragments of today's training.
The CSTO leaders who watched the training a bit later shared their impressions. “This is very important for us,” said President of Belarus Alexander Lukashenko. “I still think about Vladimir Vladimirovich, if we are members of the CSTO, this means the area of ​​responsibility in this regard of the Russian Federation and our state. Therefore, the power of Russia militarily is also a defense our national interests. Hence our duty, the CSTO zones, in solidarity with the Russian Federation and in our joint actions. God forbid, if we have to end up in such a situation in life. "
The preliminary results of the training were announced today. "I ask you to carefully analyze today's work. All this happened in real time. I understand that this is not a staged event, this is not a theater, this is a real combat work. We need to carefully analyze everything that was possible, look at where there are problems, conclusions, report to the Minister of Defense ", - said Vladimir Putin.
“I ask you to report back to me on the results of today's work after summing up,” the president addressed Shoigu. "I want to thank you all once again and congratulate you on the upcoming holiday, on Victory Day!" - he added.
The final assessment of the military will be set by the Supreme Commander after a full analysis of the actions of all levels of the country's defense management.