2 May 2014
841
Earlier there were reports that the assault on Slavyansk, which continues to hold the supporters of federalization, may begin on May 2. 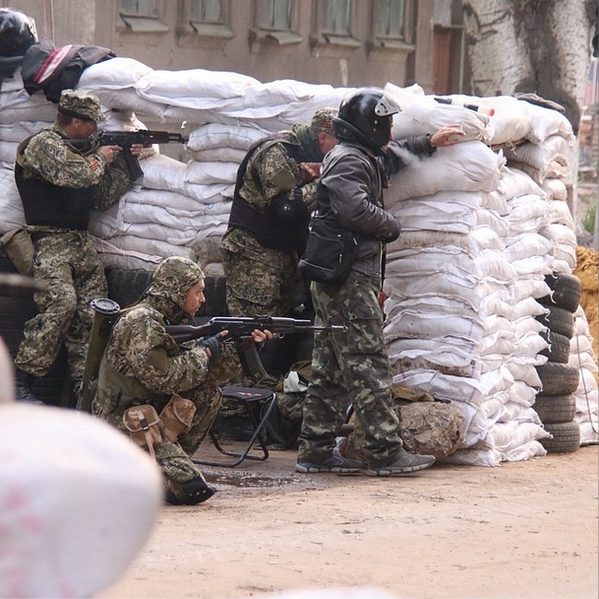 The civil defense siren in Slavyansk, which is to inform the city residents about the beginning of the active phase of the special operation of the Kiev authorities, was launched on Friday morning, the RIA correspondent reports. News.

Earlier there were reports that the assault on Slavyansk, which continues to hold the supporters of federalization, may begin on May 2. "People's Mayor" Vyacheslav Ponomarev said that at the beginning of active operations by the Ukrainian military siren will turn on.

After a few minutes, the siren died down. Her sounds were accompanied by shooting, which then also ceased.

Thick clouds of smoke rise from one of the outskirts of the city, apparently from burning tires.
Helicopters circling over the city.

The Slavyansk self-defense forces reported that the Ukrainian military had begun active operations and were attacking several checkpoints at once. “The attack goes immediately to several roadblocks. Several armored personnel carriers and BMDs approached, and the paratroopers landed from helicopters and engaged in checkpoints.

Certain forces landed in the area of ​​the railway station, where we had no forces, ”said a spokesman for the city’s self-defense press service.

“Everything is calm in the center of the city. There is no data on the wounded yet, ”he added.

According to Yuri, commander of the roadblock in the village of Bylbasovka to the west of Slavyansk, a convoy of eight armored personnel carriers and six National Guard buses, which took the first barricade in Bylbasovka, came out to meet them from Barvenkovo, Kharkiv region.

“Ours didn’t have grenade launchers there, only machine guns. You can’t do anything with an automatic machine against an armored troop-carrier, so we’ve shot a little and moved away. We’re waiting for them at the second checkpoint,” he told RIA Novosti.

According to the interlocutor, the Ukrainian troops took the TV center of Slavyansk on Mount Karachun, south of Bylbasovka and Slavyansk.

According to the reviews of the militias at the roadblocks between Slavyansk and Kramatorsk, six BMD drove up to them, but so far the paratroopers do not enter the battle.

Several Slavyansk self-defense activists told RIA Novosti that a helicopter was shot down over the city. Activists claim that they have a video of the crash of a helicopter, which they intend to make public soon.

Some militiamen reported that another helicopter opened fire on the ground, a rocket was fired in response, and the helicopter was shot down. Both downed helicopters Mi-24, they provided support for the landing of helicopters Mi-8, said activists.

Three armored personnel carriers of Slavyansk self-defense were shot down; one of the crews of the helicopters killed by self-defense killed one pilot and another in captivity, a representative of the local administration told RIA Novosti.

Zhirinovsky on the special operation in Slavyansk: Russia is obliged to help

The Ukrainian army 2 May launched a special operation in Slavyansk. According to LDPR leader Vladimir Zhirinovsky, this punitive operation can lead to a huge number of victims. According to the politician, in this situation, Russia is obliged to take the most stringent response measures.

Ukrainian military threw a wounded helicopter pilot on the battlefield

After the start of the storming of Slavyansk, self-defense forces of the city shot down two Ukrainian helicopters. One pilot was killed, the second was injured. The Ukrainian military did not help him and left the scene of the collision. The self-defense fighters had to save the wounded man, and they assisted him and took him to the hospital.

6:39 Moscow time Donbass Self-Defense Forces claim that the Ukrainian military launched an assault on Slavyansk early in the morning of May 2. “About an hour ago, the assault began. Fire is conducted both by ground units and from the air with the support of aviation", - said a representative of the headquarters of the city’s self-defense forces.

6: 46 MSK. From the side of Donetsk, suitable equipment column

6: 55 MSK. It is reported that punishers are shooting at all targets without warning.

6: 58 MSK RIA Novosti reported on the capture of the TV tower.

7: 04 MSK. Reported 20 helicopters. Two helicopters shot down. One of them managed to sit on the field.

7: 09 MSK. In Kramatorsk, the militia is alarmed

7: 15 MSK Reported to be a captured helicopter pilot, he is now being taken to headquarters. Above the city there is a bell of bells.

7: 20 MSK Message about the battle near the railway station Slavyansk

7: 46 MSK. Militia Slavyansk transmits about the first victims from his side. The center of Kramatorsk is blocked by buses, barricades are being built.

7: 50 Moscow time RT - Ponomarev, mayor of Slavyansk :: "..." We shot down two helicopters, one pilot was in captivity. Another one was still floundering in the estuary. One of the other pilot managed to escape through the field. Another pilot "He said that Ukrainian helicopters are firing missiles at the city. There is no information about the destruction yet ..."

7: 56 MSK The militia reports that the punishers are bogged down at checkpoints. All the checkpoints, except for one (with it is not yet clear) under the control of the militia.

8: 11 MSK. According to unconfirmed reports, sirens were involved in Kramatorsk. Perhaps the assault began.

8: 21. RIA Novosti: Three armored personnel carriers of Slavyansk were destroyed, one of the crews of self-defense helicopters was killed, one pilot was killed, another was captured, a representative of the local administration told RIA Novosti. According to him, the Ukrainian army sets up artillery guns around the recently captured television center of Slavyansk. “Cannons are installed near the captured television station,” the agency’s source said. Also, according to him, one of the checkpoints was captured. "The rest of the checkpoints are being held, and help from other cities is coming to us," he noted.

8: 22 MSK. It is reported that Kolomoisky promised pilots of Ukrainian 350 helicopters thousands of dollars "for the fulfillment of military duty in the destruction of the separatists."

8: 29 MSK Reportedly delivered to the headquarters of a captive pilot. Injured. Treat the wound

8: 51 MSK. The Ukrainian Slavyansk Self-Defense Forces report a temporary suspension of fire from the attackers. On the outskirts of the city there is destruction. The self-defense headquarters suggests that the military, sent to Slavyansk by new Kiev authorities, are now regrouping.
“Most of the buildings that were located near the checkpoints were damaged. Several houses were shelled,” a spokesman for the city’s self-defense staff told Interfax.

08: 54 MSK Special corps KP Steshin from Slavyansk reports that inside the city all the militia checkpoints are in full combat readiness and integrity.
By the way, just passed through the city all the blocks are, people are standing on them. see not really want to fight svidomity. only on the internet.

08: 56 MSK Special corps KP Steshin from Slavyansk reports that the Ukrainian TV channels have not said a word about the start of hostilities.
The militiaman, literally: “Russia immediately began to show Slavyansk, and on Ukrainian channels cartoons are twisting, good morning, Ukraine! Do not cough!”

09: 21 MSK Spetskor KP Steshin from Slavyansk reports:
The third helicopter shot down, they say from the RPG

09: 49 MSK One of the roadblocks in the suburb of Slavyansk in eastern Ukraine came under the control of Ukrainian security officials, who began an active phase of the special operation against supporters of federalization on Friday morning, RIA Novosti reports.

09: 54 MSK The head of the Ministry of Internal Affairs of Ukraine declared one dead and several wounded in Slavyansk.
Representatives of the Slavyansk militia previously reported one dead and one wounded as a result of the active phase of the special operation in the city, which was started on Friday by Kiev-controlled security forces.

10: 07 MSK Kiev overlaps the railway message in the area of ​​Slavyansk
In the next hour, the Ukrainian authorities intend to block the railway communication and limit the movement of vehicles in the Slavyansk region, where on Friday morning the security forces began an active phase of the special operation against supporters of federalization, the acting president said. Interior Minister Arsen Avakov on his Facebook page.

10: 21 MSK Igor Korotchenko Editor-in-Chief National Defense magazine, Director of the World Trade Analysis Center weapons:
The Russian Federation must declare the establishment of an international military tribunal for the former Ukraine, which will investigate the crimes of the Kiev junta

10: 42 MSK Sergey Aksenov:
The so-called "Ukrainian army" under Slavyansk is more like a pack of barking stray dogs. Lay a lot - zero sense.

11: 20 MSU Militias are building barricades in the center of Slavyansk

The militia of Slavyansk left several roadblocks from the northern entrances, Anatoliy Khmeleva, leader of the local branch of the Communist Party of Ukraine, first secretary of the Communist Party of Ukraine, told RIA Novosti.
“In particular, they left the post at the feed mill to avoid losses. But, according to our data, there are no Ukrainian military there either,” he said.

11: 35 MSK Spetskor KP Steshin from Slavyansk reports:
The Ukrainian military told us that they did not have an order to take the city, he received the same info through his channels still early in the morning Shooters.
Ctrl Enter
Noticed oshЫbku Highlight text and press. Ctrl + Enter
We are
Review of special operation in Khasavyurt 5 May 2014
Military Reviewin Yandex News
Military Reviewin Google News
841 comment
Information
Dear reader, to leave comments on the publication, you must sign in.