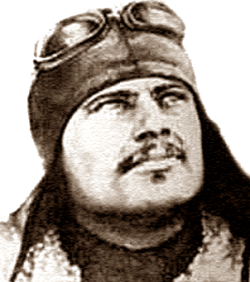 On the combat account of Second Lieutenant Vasily Ivanovich Yanchenko, who fought on the “Newpores,” there were 16 air victories.


The future aviator hero was born on January 1, 1894 in the city (or near the city) of Nikolsk-Ussuriysk (now Ussuriysk), in the very center of Primorye, in the family of Ivan Gavrilovich and Irina Timofeevna Yanchenko. A few years before the birth of a son, in search of a better life, like many other families, they moved from the western part of the country to the Far East. A year after the birth of Vasily, another boy was born in the family - Mikhail. Subsequently, Michael also became aviation a specialist and a pilot, he emigrated to South America and died in Argentina in 1982 at the age of 87.

After the death of Ivan Gavrilovich, the mother remarried after a while, and the care of the children was entrusted to his stepfather Fedor Ivanovich Sobchenko. He did everything so that they could get an education. From childhood, Vasya showed a lively creative interest in technology, in all kinds of technical devices. In 1910, the city of Fedor Ivanovich and Irina Timofeevna with children moved to Saratov. Here in 1913, Vasily graduated from Saratov Technical School.

With the beginning of the war, in October 1914, the twenty-year-old Yanchenko voluntarily joined the Russian imperial aviation. He began his service in the 3 corps aviation squad as a mechanic. 22 November 1914 g. The skill and perseverance of a young guy, more than once surprised by much more experienced mechanics, were marked by the rank of corporal. Soon a sensible, inquisitive, initiative and fearless corporal Yanchenko achieved admission to flying as an observer pilot. In this capacity, he made more than twenty missions to explore enemy positions.

Vasily had a trust relationship with the command, much was allowed to him, but he did not remain in debt: sometimes the engine went out of the working mode sometimes to the desired level.

The engines that were installed on most airplanes during World War I were mostly rotary — that is, they rotated with the crankcase and propeller around the stationary crankshaft. Maintenance of these engines, and today seemingly difficult for experienced mechanics, was associated with many difficulties. The engines were produced in France, and the manual for their operation suffered all sorts of inaccuracies.

Vasily Ivanovich deeply penetrated into the essence of the engine and used to repair them, and sometimes bring up to higher power several innovations invented by him himself (that which would later be called rational proposals and inventions).

Thus, such craftsmen, like him, laid the foundations of a genuinely folk refinement of the aircraft, widely used by competent mechanics and mechanics during the Great Patriotic War, when "raw" new airplanes were converted and adjusted by service engineers to a level that sometimes exceeded the specified characteristics .

Later, Vasily Yanchenko himself learned how to pilot the Newport-XI airplane. He was sent to aviation courses in Petrograd, then to the Sevastopol military air school. 4 September 1915 ends school, having completed an independent flight on a Moran-Solnier airplane during the training process. After graduation, he was enlisted in the 12 th squadron with the rank of senior non-commissioned officer.

The first combat sortie made by 15 on September 1915 was overshadowed by an abnormal situation: during the flight, an airplane engine suddenly caught fire. However, the young pilot didn’t lose his composure and managed to land the burning car. “For his courage in extraordinary circumstances, which allowed him to retain military equipment and crew,” he was awarded the distinction of the Order of St. George - the IV degree of St. George Cross. A month later, his chest was adorned with the St. George Cross of the III degree - with this award he was awarded for successfully completed combat missions. Then he was sent to the Moscow flight school, where from November 1915 he passed a special course of a fighter pilot. He continued his military service from 5 in January of 1916 as part of the 3 squadron, making ten sorties. Relations with the command of the squadron in VI. Yanchenko did not work out, and in April of the 1916, he was transferred to the 7 fighter squadron based at Tarnopol. Within two weeks, he mastered the new for him “Newport-X”.

And it was on this plane 25 June 1916, Vasily won his first victory. He shot down, attacking him with his commander, Ensign I. Orlov (another Russian ace), an Austrian reconnaissance aircraft "Aviatic B.III."
For this victory, Feldwebel Yanchenko was awarded the George Cross II degree.

In August, 1916 re-equipped the detachment: it was transferred to the new "Newpores", created under the leadership of the division - then the company's chief engineer. From the “Newpore-X” the new “Newpore-XI” was distinguished, first of all, by its small size (the length of the 5,6 machine, m, is over 2 with an extra meter less than that of Newpore, the wingspan — 7,5m, is less than three meter). In combination with low weight (480 kg), this increased the maneuverability of the aircraft, and the enemy was hampered by aiming at a small car. The first "Newpore" did not have the dashboard. The compass, chronometer, tachometer and altimeter were located at the corners of the cockpit, which made the pilot turn his head very energetically. Note that the Newpor-XI was recognized as the best fighter of the Entente, and although it was inferior in power of the engine and weaponry to the newer Newpore and SPAD, many pilots used a small military airplane until the end of the war.

Meanwhile, Ensign Yanchenko was awarded the Order of St. Anne IV degree with the inscription "For Bravery" and the title of military pilot for the fact that October 5 1916 was already on Newpore XI, again paired with I. Orlov, shot down an enemy plane "Brandenburg". In addition, the tireless 18 ensign of October 1916 g., Performing patrols, found three enemy vehicles. Without thinking, he rushed to the attack. As a result, one aircraft shot down, the second one was damaged and, together with the third one, it took flight. The crew of the downed airplane was eventually in our captivity.

As part of a group of Russian Yanchenko pilots in November 1916, he completed an internship in France, in schools of aerobatics and air shooting in the cities of Pau and Caza. Then honed combat skills on the Western Front. On his return to Russia 3 January 1917 was awarded the Order of Vladimir IV degree.

The extraordinary natural talent helped the brave pilot, who had only a primary technical education, to repeatedly upgrade and bring what is called “to mind” military planes entrusted to him.

Vasily Yanchenko was distinguished by exceptional courage and perseverance, more than once he was literally on the verge of life and death. During the tests of "Swan-7" and the modified "Newpor" he got into the infirmary three times due to injuries.

There, by the way, he met and became friends with the Russian ace of Polish origin, Donat Makienk, who is also a real aviation enthusiast. It was in the infirmary that they discussed several new methods of air combat, which they soon tested in practice.

7 March 1917. They attacked in a couple and shot down an enemy reconnaissance aircraft. 13 April 1917 Vasily, along with D. Makienok and Y. Gilscher, attacked three Austrian Brandenburg CI at once. As a result of the battle, two of the three cars were shot down and recorded at the expense of three Russian pilots. 2 July Yanchenko again shot down Brandenburg, and 6 July recorded his ninth victory. On July 11, they again, together with D. Makiyonok, shot down the enemy airplane, and on July 18, he shot down another enemy in a single combat sortie. July 20 (July old style 7) Yanchenko, Orlov and Gilscher engaged in battle with a group of German airplanes. One enemy aircraft was shot down, but the Russian ace, the George Knight, noted by the George weapons, twenty-three cornet Yu.V. Gilscher

Basil wrote a warm, detailed letter to the father of the deceased ace.

19 August after a joint victory, won in a pair with Makiyonok, Vasily Ivanovich was again lightly, but painfully wounded. 6, 20 of September and 8 of October Yanchenko gains his next victories. 14 October 1917 g. He writes down at his own expense the last aircraft he shot down - "Albatross" D.III. ". It was an unconditional victory: Yanchenko landed nearby and, finding the dead pilot, took his documents. Here is an excerpt from the report of the pilot:

“... I saw a group of airplanes gaining altitude, and began to pursue them. In the area of ​​the village of Dubrovka, I suddenly attacked a single Albatross. He began to perform a sharp left turn, trying to counterattack, but at this time I opened fire and hit him. "Albatross fell on the wing and entered the vertical peak ...".

Second Lieutenant Yanchenko fought on Moran-Solnier, Moran-Monokok, Newpore-IV, Newpore-X, Newpore-XI, Newpore-XVII, Newpore-XXI. Most of his victories, as well as the well-known aces of the Entente - the French Nanjesser and Guinemer, Fonck and Navar, the British Ball and Mannock, he scored on the small and wrench airplane fighter “Newpore XI”, known by the nickname “Bebe”. Shot down personally and in the 16 group of enemy aircraft. Most likely, he shot down 8 airplanes personally, 5 - in a pair, and 3 - as part of a group of 3 airplanes. He shared his group victories with the outstanding Russian aces - Ivan Orlov, Donat Makiyonok, Yuri Gilsher.

Among the enemy planes shot down by Yanchenko are the Aviation V.1, the double Albatross, the three shot down Gansa-Brandenburg C.1, a double two-post biplane, the two Albatros D.III airplanes, designed by the German designer E. Heinkel, "Aviatic C".

Like some other well-known pilots, Vasily Ivanovich Yanchenko, the second most effective Russian ace, was not awarded the Order of St. George of the IV degree and, not having received the St. George's Cross of the First Degree, did not become a knight of the full bow of St. George's Cross (despite the widespread publications on his awarding these orders), and the war ended in the junior officer rank of second lieutenant. The reason for this was his character - decisive, harsh, independent in the judgments of man.

After the revolution, he joined the volunteer army of General Kornilov, where he was promoted to captain. In April, 1920 was dismissed from the army of General Wrangel for a fight, arranged by him with another pilot - Second Lieutenant Nazarevich in Simferopol, in the cabaret of the Petrogradskaya hotel.

In 1920 or later emigrated to the USA. Worked as an engineer with I.I. Sikorsky, but having quarreled with him, he moved to New York and soon began working as a design engineer in the American city of Syracuse.

He was very much appreciated as a designer, but for his abrupt temper, wild nature and intractability he received the nickname Wild Tatar from the Americans.