March 19 2014
66
The shocking number - half - of the fleet of Su-30MKI Indian Air Force fighters is chained to the ground due to unresolved service disagreements with Russian manufacturers. This undermines the combat effectiveness of the country's air force and negatively affects that part fleetwhich is still capable of flying. The Indian Air Force and Hindustan Aeronautics Limited (HAL) sounded the alarm due to repeated failures during the flight of the Su-30 on-board computers and the shutdown of all multi-function displays. For over a year, Russians have not responded to multiple SOS signals from Indians. This was reported by the Indian newspaper The Sunday Guardian, citing documents at its disposal from the correspondence of HAL and Russian counterparties. Here is the translation of the note.


The managing director of the Nasik industrial complex that is part of HAL, where licensed assembly and maintenance of the Dry Air Force for the Indian Air Force is being carried out, frantically but vainly signaled “numerous malfunctions of the on-board computer onboard computer and disconnection of the multifunction displays during the flight” to representatives of Rosoboronexport and the manufacturer original Su-30 - Corporation "Irkut".

“Since turning off displays is a serious and critical problem affecting the operation of aircraft, immediate action is required to eliminate these problems,” he said in a letter from 28 February 2014 February, reminding Russians that this issue was unsuccessful in March 7 2013 year

On-board computer failures and disabling displays are critical faults. The entire flight is programmed in the central on-board computer - this is vital for meeting the requirements of air combat. Turning off the displays in the cockpit knocks down the pilots and distracts their attention from the tasks they perform. The Indian Air Force is worried that the core of their fighter fleet is plagued by endless problems. Total Indian Air Force planned to buy X-NUMX fighter Su-272, of which 30 fighter has already been delivered.

Marshal aviation Denzil Keelor, one of the most “titled” Indian Air Force fighter pilots, is discouraged. “Malfunctions during the flight, in particular those in question, make the aircraft vulnerable. If a fighter flies with reduced capabilities, it becomes more vulnerable to the enemy. No aircraft should be flown if it is not ready to demonstrate 100% of its capabilities, ”he warns.

What seems even more alarming is the deliberate slowness of the Russians, which seriously undermines the combat capability and combat readiness of the Indian Air Force. Five years after the signing of the contract for the creation in India of repair facilities for servicing Su-30 aircraft based on HAL, there is no progress - except for “agreements” and promises, even at the level of defense ministries.

“Due to the unavailability of facilities for servicing the units and components, the serviceability of the Su-30MKI fighter fleet is gradually decreasing, and the need for AOG components for urgent replacement is growing,” the representatives of the plant in Nasik again implore in a demonstrative letter to Rosboronexport 24 December 2013. Even the revised deadlines obliged the Russians to organize on HAL by December 2013 repair and maintenance facilities, and by June 2014 to serve the first aircraft. Nothing of the kind is expected.

Even worse, Russia has suspended the dispatch of Sukhoi specialists to India to help organize repairs and maintenance. Documents that are in the possession of The Sunday Guardian, say that the parties bicker at the price. This is contrary to the agreement that the sending of Russian specialists will not be interrupted, even if the negotiations on prices have not been completed. In the absence of Russian specialists, HAL is forced to cope on its own, while the number of aircraft chained to the ground is growing.

“A huge number of defective parts are lying around at various Air Force bases in anticipation of repair,” representatives of HAL said, also reporting that the number of Su-30 fighters that are not performing flights in anticipation of urgent repairs is increasing. The Russians were informed that five Su-30MKIs are already in HAL in anticipation of a major overhaul, and 15 should be repaired this year. This number is equivalent to the whole squadron. 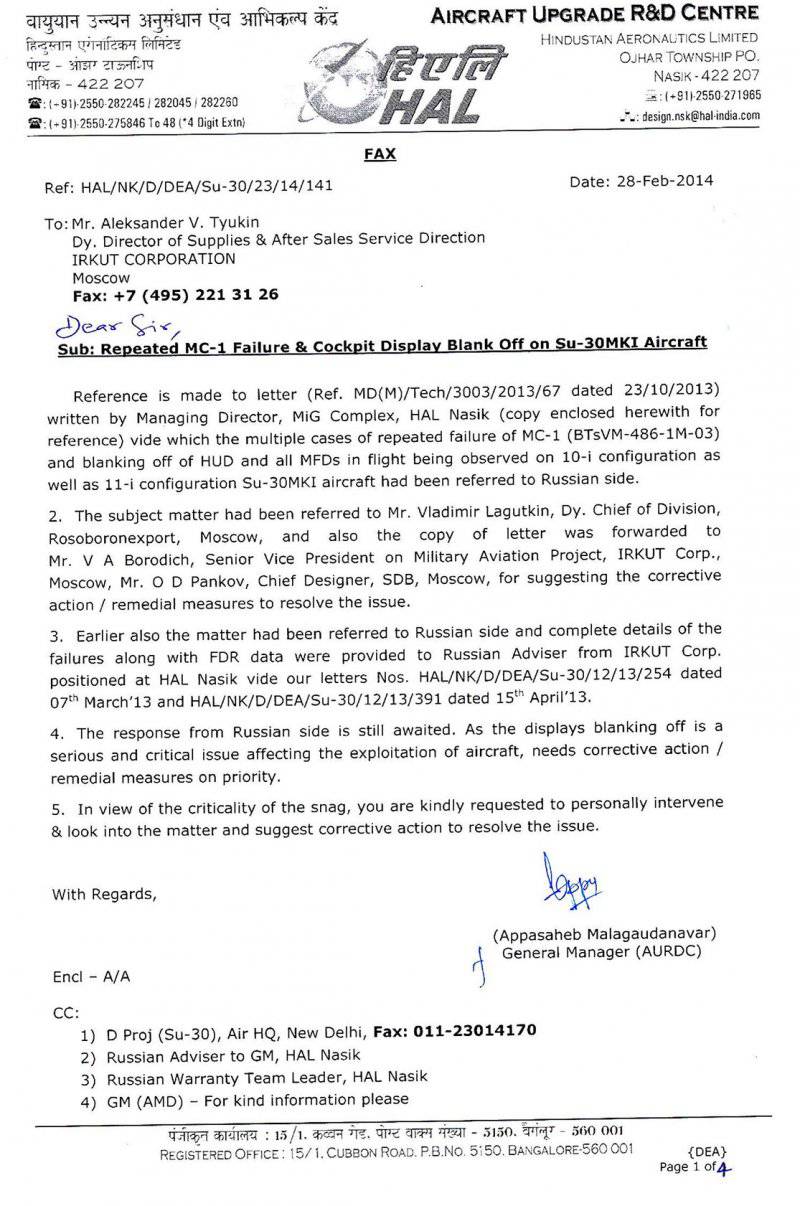 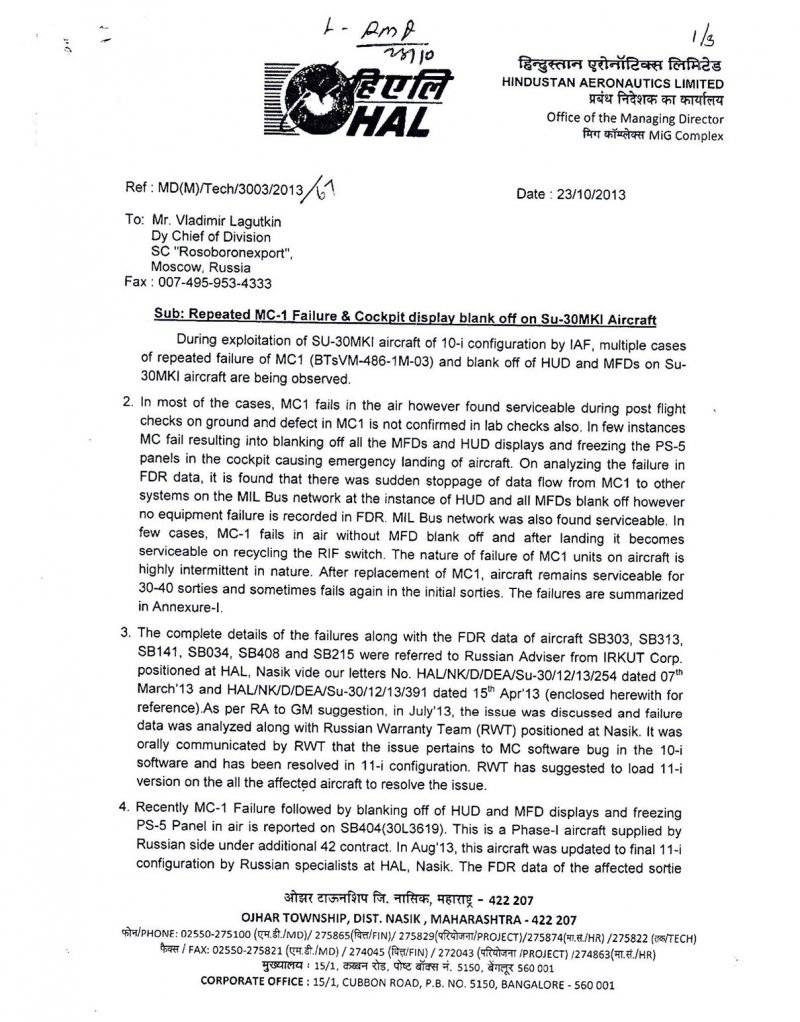 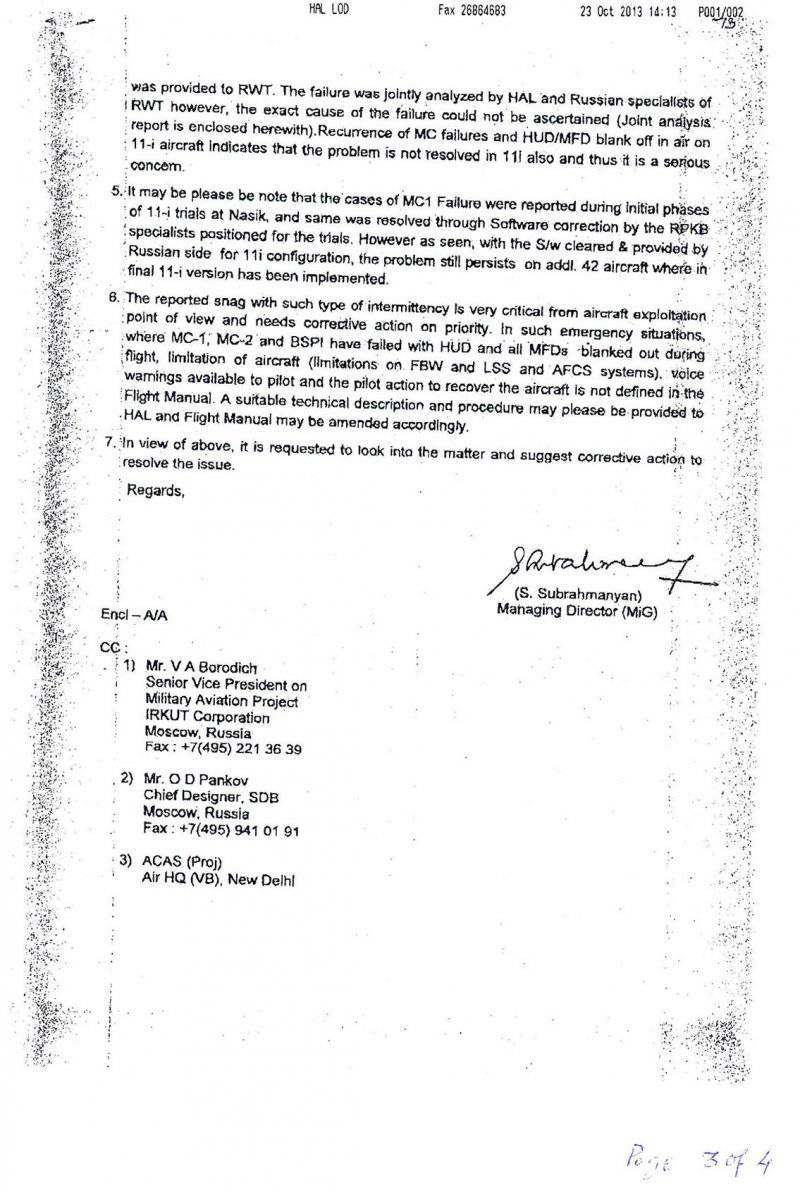 While complaining about the delays of the Russian side, HAL expresses even more helplessness: “Rosoboronexport and Irkut Corporation (main parties to the contract) seem to have limited influence on other Russian companies (which supply vital parts, such as engines).” Supplies of consumables and secondment of specialists by other companies are even more irregular.

Warning that the operation of fighters without permanent elimination of repetitive faults may affect pilots' confidence in themselves, Air Marshal PS Ahluwalia (PS Ahluwalia), who recently headed the Western Command of the Indian Air Force, addresses questions about the deplorable state of affairs to the representatives of HAL and the Ministry of Defense of India: “The problem is in the errors of service management organization. Responsibility lies with the Defense Production Department of the Ministry of Defense. They could not solve these problems. ” 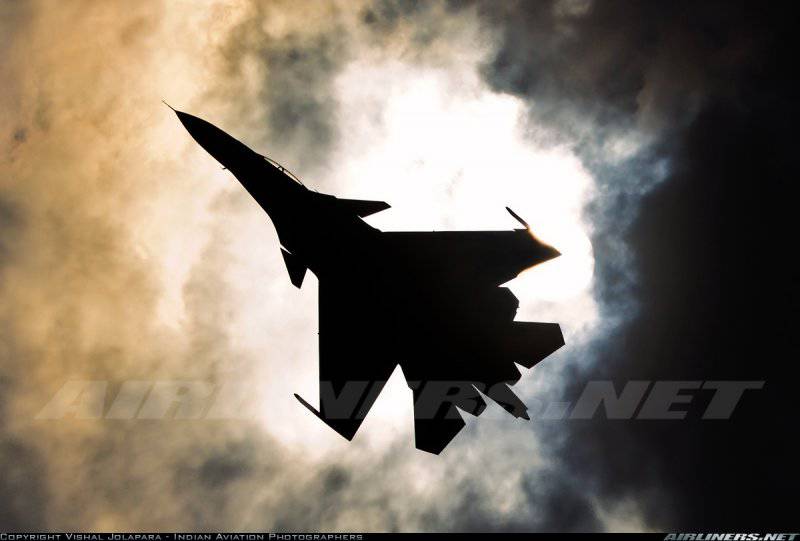 Marshal Ahluwalia didn’t doubt for three months to ban flights of the MiG-29 fighter jets for three months as the head of the Western Command of the Indian Air Force, when after the crash of one aircraft there were suspicions about their suitability for operation. He allowed them to fly again only after the maintenance problem was solved.

The figures show how acute the Su-30MKI serviceability problem is for the Indian Air Force. Only 50% of these fighters are in a flightable condition. For the French Mirage-2000 as part of the Indian Air Force, and even for Russian MiG-29 fighters, this figure is approximately 75%. While India is bargaining with Russia for more favorable conditions of service, a reasonable question arises: what kind of good is weaponswhich can not be used?

Ctrl Enter
Noticed oshЫbku Highlight text and press. Ctrl + Enter
We are
Will the Indian Air Force be interested in the F-16 Block 70? Lockheed Martin is wedging back into the Indian arms marketThe Brahmos missile was almost completely integrated with the Su-30MKI fighter
Military Reviewin Yandex News
Military Reviewin Google News
66 comments
Information
Dear reader, to leave comments on the publication, you must sign in.