Kiev became the capital of European terrorism and the Russian response 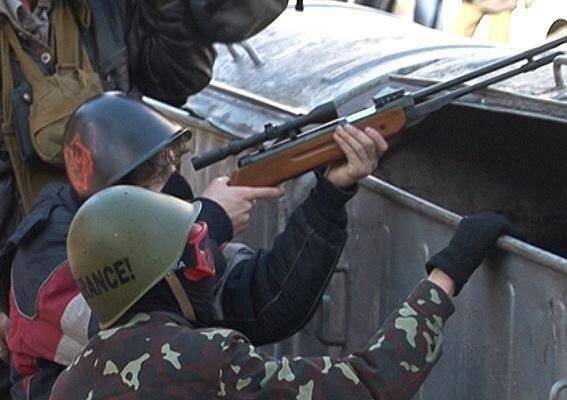 The madness of the United States and other Western countries in their confrontation with Russia led to the fact that in the east of Europe a hotbed of bloody terrorism was formed that threatens prosperous Europeans with great misfortunes. The terrorist Yatsenyuk, the executioner Tyagnibok and the bloody Klitschko began the war with the full support of Barack Obama, Angelina Merkel, Francois Hollande, David Cameron, Jose Manuel Barroso, Stefan Fule, Bronislav Komarovsky and “nice” ladies represented by Victoria Nuland and

Shortly before the start of the Sochi Olympics, well-known political scientist Brzezin Zbigniewski predicted that it "... can be used as a global event for organizing various kinds of provocations." Then he suggested that the main events will take place in Ukraine. After this happened, Brzezin Zbigniewski kindly agreed to give a small comment on the topic:

These politicians are the worthy heirs of Neville Chamberlain, Edward Daladier, and the industrial and financial circles of the United States and Western Europe, who brought Adolf Hitler to power and then armed him to the teeth. Having spawned neo-fascists in Ukraine, they are now cynically calling for a “peaceful resolution of the conflict.”

But the fact is absolutely obvious that Western civilization is absolutely unviable in the absence of inspired bloody conflicts. This is due to the fact that circles in power in Western countries have primitive cave colonial thinking that is focused only on war. And the Western economy is only when there is war.

It is necessary to create an International Tribunal for crimes committed by Western politicians in Ukraine, if we do not want to plunge this country, in particular, and all of Europe, as a whole, into chaos, similar to what happened in Yugoslavia and is happening now in Syria.

Ukrainian fascists launched an offensive. It would be the greatest and silliest mistake to believe that their goal is Ukraine itself. In fact, this attack is organized with two goals.

First goal: the terrorist war that began on the territory of Ukraine is only the initial stage of aggression against Russia. In the recent past, it can be compared with the annexation of Austria and the subsequent division of Czechoslovakia. The task: to force Russia either to give Ukraine to the fascists, who are supported by the West, or to force Russia to get involved in the conflict, and even to divide Ukraine. In both cases, Russia receives on its western border an absolutely hostile pseudo-state like Kosovo, which does not have any independence, and exists only to serve as a springboard for organizing further attacks on Russia.

Second goal: the formation on the territory of Ukraine on the basis of the neo-Bandere fascist formations of the armed vanguard to deliver a further strike on Russia. This strike should be organized first as the creation and further activation of terrorist groups already in Russia itself. In the secret documents of the CIA and Mi-6, this operation is called “Caucasus on the Dnieper” (“Caucasus on the Dnieper”), which directly indicates the West’s desire to create a point of tension for Russia and thus, if not terrorist acts, then economic stress associated with the need to counter such threats, to significantly weaken it.

There is also a third, less obvious goal: the United States wants an escalation of the Ukrainian conflict to complicate the life of Europe itself.

In the future, according to experts on "color" revolutions, in the event of favorable developments for them, a sharp aggravation of the internal political situation in Russia, the deterioration of its economy and the coming to power of pro-Western forces there is possible.

It also does not exclude the possibility of using armed units of neo-Banderas as a modern version of the executioners of the Nachtigall battalion, the punitive squadrons of the SS Galichina SS and the militants of the OUN-UPA in Russia in the event of an armed conflict of NATO and R. F. The West does not want to fight bear the loss. It is much more expedient for him to use such a limitrophe state in the armed struggle against the Russians, which Ukraine can become in the event of the victory of neo-Banderes and neo-Nazis.

The fact that the West supports, finances and arms militants in Kiev and Western Ukraine is completely obvious and does not require any additional evidence.

The high organization demonstrated by the Ukrainian terrorist fighters in clashes with law enforcement forces, millions of dollars delivered to Kiev by the diplomatic mail of the US Embassy, ​​the destruction of February’s Ukrainian 18 armored personnel carriers, the massacres of militiamen, the seizure of military units and arsenals with weapons in the cities of Western Ukraine and, finally, firearms, which the militants in Kiev have in their embassies of some Western countries, are direct evidence of this.

Thus, there is a "casus belli". And here comes the real moment of truth for Russia.

For the Russian leadership it would be unforgivable if it perceived this threat only as the need for direct, including military intervention, in the bloody Ukrainian conflict. It will be only defensive actions, and in defense, as you know, wars are not won.

At the initial stage of World War II in Russia, the German Wehrmacht had an undeniable advantage in the methods and methods of waging a large mass of the modern for that time phase of the war tanks, artillery and aviation. By 1943, the Red Army, as a result of retreats and defeats, having studied, although after gigantic losses, the experience of the Wehrmacht, significantly improved it and as a result won in Berlin.

After 20 years of humiliation and defeat of Russia after the collapse of the USSR in 1991, it was long overdue for Russians to conclude that they should use methods similar to those used by the West as color revolutions as the most effective non-lethal weapons of mass destruction Third World War. And apply it in the territories of Western countries and the United States.

There are a lot of smoldering conflicts that need to be activated.

The problems of the Indians, Latinos and African Africans in the United States, Scotland and Ireland in the UK, the desire for independence in some regions of Belgium, France and Spain are obvious vulnerabilities in the defense of the West.

But the aggression of the Neanderís formations, if desired, and competent management from the outside, is very easy to switch to Poland, Romania and Lithuania, which take an active part in the Ukrainian conflict and do not hide their interest in acquiring some Ukrainian territories. And the Russians have a rich experience of such actions.

In this case, the leadership and special services of the United States and the EU countries will be forced not to export “color” revolutions, but to fight them on their own territory.

This approach will allow the Russians to find an adequate response to such threats as the bloody conflict in Kiev that directly threatens Russia. No one will blame the Russians for this, since in this case they will only react to the fact that it has already happened - the civil war in Ukraine unleashed under the leadership of the United States and the European Union.