Securing the Olympics-2014 security and open threats from extremists

January 21 2014
67
One of the main issues that worries today, let's say, the public in connection with the Olympics, which starts in early February, is the issue of security at the Games. And here there are some oddities. People for whom the very fact of holding the Olympics in Russia is like a bone in the throat, argue that the Games will turn into a “march of the FSB and the Interior Ministry”, which supposedly the Olympics will be arranged not for athletes and fans, but will become a kind of large-scale Russian special services exercises single plot. Others, on the contrary, argue that the Winter Games in Sochi, whatever the number of security forces involved in security, would still not be safe, and that a trip to such games should definitely be abandoned for our own safety. 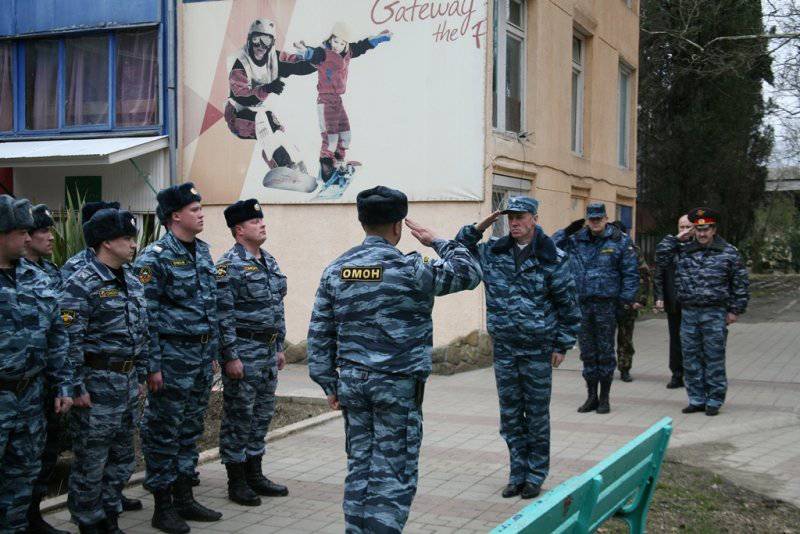 Security is one of the key issues of any mass event, including sports. Today's circumstances are such that ensuring security at the proper level is the norm, and continue to use some kind of critical "izmyshlizm" from the cycle of discussions that the police "could have been smaller" or, conversely, "the number of policemen must be increased tenfold" areas of strange logic. There will be as many policemen and special services officers at the Sochi Games as the situation requires - no more, but, of course, no less.

One of the reasons for the aforementioned criticism of the formation of the security sphere around the Olympics was the words of Vladimir Putin that the other day said that around 40 thousands of law enforcement officers and special services would be involved during the Games. Putin in an interview with major TV channels said:

We will protect both the airspace, and the sea area, and the mountain cluster.

Is such a high number of law enforcement officers involved in protecting the life and health of people at the Olympics justified? In a developing situation, when the terrorist underground is being formed and actively paid off by forces interested in destabilizing the situation in the Caucasus, it would be simply thoughtless to go away from attracting a large number of employees of the Ministry of Internal Affairs and other security agencies, and in diplomatic language, it is counterproductive.

Literally the other day, the large German media company Deutsche Welle, citing reports from the Deutsche Presse-Agentur agency (DPA or dpa), said that over the weekend, the persons who had claimed responsibility for the December Volgograd terrorist attacks had “announced.” These individuals were representatives of the Iraqi extremist group Ansar al-Sunna, which began its bloody journey in 2003. Last Sunday, extremists posted a message on a well-known video hosting service on the Internet, stating that the Volgograd explosions that killed civilians were their own doing, and that they had allegedly prepared suicide bombers. Some shots of Suleiman and Abdurrahman were captured on the frames, and a voice-over said that, they say, these are the people who blew themselves up in Volgograd in December. At the same time, the militants, using well-known tactics of intimidation, announced that "this is only the beginning of the sufferings of the Russian people," that Russia will wash away with blood, and that the attacks will continue until the use of chemical weapons. The Ansar al-Sunna grouping promises to disrupt the Olympic Games in Sochi.

The creators of the extremist video are trying to convince people that in this case they were doing the “will” of Doku Umarov, whose death the head of the Chechen Republic Ramzan Kadyrov recently says.

Is this video a real confirmation that Doku Umarov and some Iraqi extremists are behind the terrorist attacks in Volgograd? There is no unequivocal answer to this question, and there can not be. If it was really “Ansar al-Sunna”, then what did it prevent its representatives from taking responsibility for the terrorist attacks in the city on the Volga immediately after they were held? Immediately there was no courage, or is it an extremist self-PRAIT for completely different purposes? .. 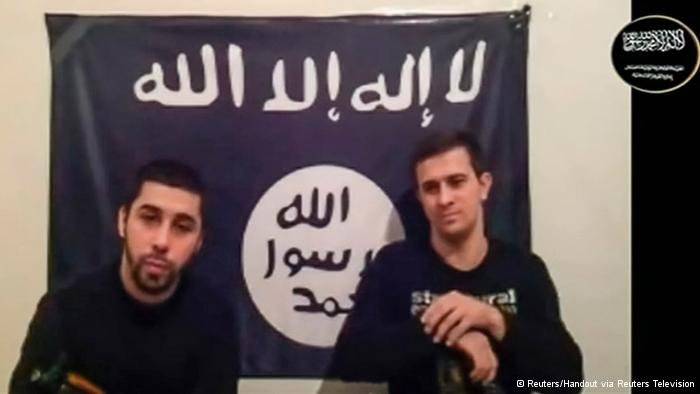 The fact is that before the start of the Olympics, all the radical riffraffers, receiving generous funding from the main sponsors of their activities, will go out of their way to demonstrate their desire to work out the money received and get new funding. How to get? Through promises to disrupt the coming Olympiad - as an option. Forgive me for comparing, this is a kind of casting of radicals and extremists of all stripes - who will curry more than potential sponsors and get a “role” in a big project aimed at disrupting a sports festival.

In this regard, it can be expected that in the near future there will be other “organizations” that will announce “jihad in the Caucasus”, “washing with the blood of Russian cities”, even chemical, even “intergalactic” weapons in their (extremist) hands , and about other things, which in the form of the main psychological theses are fixed in their “training manual”, which is fraught with long-term, multidirectional use. “Manual” or “anthology”, by the way, was developed far from the North Caucasian basements or Afghan villages, but in well-lit rooms, for example, on the Arabian Peninsula ...

So, back to the security system, which is built around the Olympics, starting February 7 in Sochi. 40 of thousands of policemen, soldiers of the Internal Troops and special services, dog handlers with dogs, helicopters, unmanned aerial vehicles, special balloons with a set of video cameras, metal detectors, X-ray inspection systems for baggage contents. Pskov information agency (PAI) reports that divisions of the Pskov paratroopers (battalions of the 104 regiment of the 76 Guards DSGD) may soon go to Sochi.

Is this all something unique in modern stories? It is hardly possible here to talk about some kind of overwhelming uniqueness. Threats have been and remain, and therefore, no country is going to neglect to increase the level of security in recent times. Russia as well.

To understand this, you should pay attention to the preparation for other Games.

On the preparations for the "white" Olympics in 2002 in the American Salt Lake City. The Olympics took place a few months after the attacks of September 11, 2001. The attacks in New York and Washington led to an unprecedented increase in the number of police and intelligence agents involved in the protection of Olympic facilities. A couple of weeks after the closing of the Olympics, American newspapers came out with the headlines that up to half of all sports spectators were representatives of special services. Within a radius of 50 km in the sky above Salt Lake City not a single plane could appear while the opening ceremony of the Games was taking place with the heads of many foreign states present at it. F-16 fighters patrolled the sky, whose pilots received a direct order to intercept any unaccounted aircraft that appears in the specified radius without approval. Airspace scanned aviation complex of radio detection and guidance AWACS. From September 2001 to February 2002 in Salt Lake City, the number of security cameras at Olympic and infrastructure facilities increased almost 8 times! Metal detectors and scanning devices were installed at the facilities. Fans were forbidden to carry any hand luggage inside the competition area. The inventory of sports teams was checked and rechecked many times, which, undoubtedly, was criticized by many, but most perfectly understood the need for such strict security measures.

At the Athens Olympics (2004), in addition to the security measures that were used in Utah (USA), they decided to resort to the active use of service dogs capable of detecting the presence of explosives. For the first time at such events a remote bomb disposal technology was used (it was difficult to judge how effective this technique was, since it was not necessary to neutralize anything remotely in Athens).

In addition, the Greek authorities decided to use balloons to observe the terrain, which can statically be in the air for up to several days. Athens from the earth were "covered" with the systems of "Patriot". An important detail: in Germany several military units were formed from among the combined NATO contingent (American and German soldiers), ready at any time to provide support to specialists who ensure the safety of the 2004 Olympiad of the year.

China has been conducting more thoroughly and extensively training for the 2008 Olympiad in Beijing in the field of security. From 2005, a special plan began to work, according to which special units had to clearly understand the front of their work and know the methods and techniques for their contribution to the overall security system of the upcoming event. The total number of police and special services involved in the protection of Olympic facilities and the most important objects of Beijing infrastructure (airports, train stations, hotels), only according to official reports, amounted to more than 90 thousands. And this is not counting almost 300 of thousands of civilian volunteers who helped law enforcement officers monitor law and order and security. Needless to say about those technical tools that were used during the Beijing Olympics, aimed at improving the safety of a sports festival. A month before the Olympics, all residents of the Chinese capital (more than 15 million people) were given express courses (using printed instructions and TV reports) on the rules of conduct in a particular critical situation (terrorist attack, fire, technological accident, etc.). ). The Chinese authorities have stepped up cooperation with Interpol and even the FBI. At the same time, countries delegating large delegations to the Olympics were allowed to arrive with the necessary number of their own security guards, representatives of the security forces.

As you can see, Russia has already adopted the experience of foreign countries in terms of the Olympics. We should not forget that our country has its own quite extensive experience in organizing and holding major competitions - Kazan Universiade 2013 of the year, world championships in hockey, figure skating, and other sports. There is an experience of holding large forums and summits.

Therefore, in order for everything to go at a proper level in Sochi, it is necessary for every person involved (from an ordinary police officer to a high-ranking official) to simply take and do their job qualitatively. In this case, everyone, excuse me, “Nusram” and “Ansaram”, will remain only in impotent rage to bite their own elbows ...

Ctrl Enter
Noticed oshЫbku Highlight text and press. Ctrl + Enter
We are
Situational analysis of the death of the MH17 flight (Malaysian Boeing 777), made on the basis of engineering analysis from 15.08.2014Results of the week. “You can legally go. It is difficult to reach
Military Reviewin Yandex News
Military Reviewin Google News
67 comments
Information
Dear reader, to leave comments on the publication, you must sign in.