Deck drones with missiles - new in tactics of wars 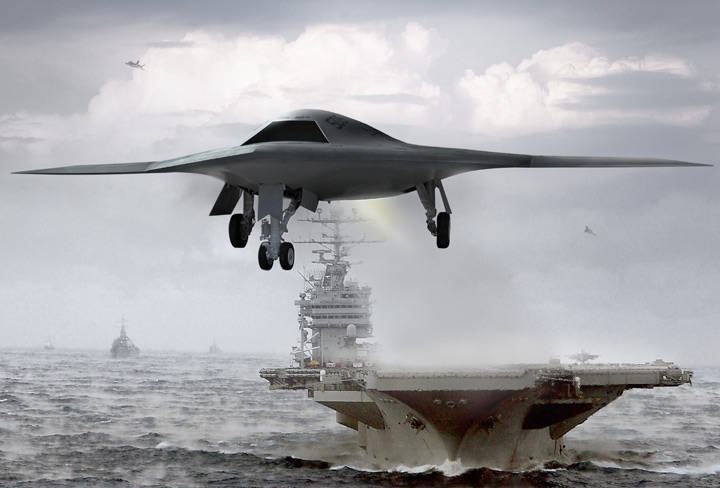 Behind the US desire to make deck drones larger and heavier, there is a transformation of tactics of future combat operations.


With significant superiority in the organization of military operations and combat operations with the use of aircraft carriers, the United States goes ahead in the main component of this type of weaponry - the use of deck aviation.

After the X-47B deck-based unmanned aerial vehicle in 2013 was tested at the level of a technology demonstrator, it seemed to be the limit, and there was no place for the aircraft carrier-fighter aircraft to move further, at least in the coming years 10.

However, the US Navy changed the concept.

They said they intend to order a larger deck drone that is comparable in size to the F-14 Tomcat fighter - the oldest, if not the oldest (1970 year of birth), deck fighter from Grumman Aircraft Engineering Corporation.

You will probably smile - the only country where F-14 was exported was Iran. But - Iran Shah, not ayatollahs.

The development of the new apparatus will be carried out under the US Navy UCLASS program - Unmanned Carrier-Launched Surveillance and Strike.

To date, several competing firms with their proposals take part in it.

The formal leader is Northrop Grumman with its basic X-47B-D (demonstrator) technology “demonstrator”.

Among other competitors for a very expensive order of the US Navy - Lockheed Martin, Boeing - with its Phantom Ray, and General Atomics with the marine version of its base drone Avenger.

Phantom Ray is also a basic demonstrator, invisible, the type is a flying wing, has the size of a conventional fighter, is notable for its versatility of application — reconnaissance and observation, rocket attack, refueling of other machines, including manned ones. It is distinguished by a developed artificial intelligence, the ability to suppress enemy missile defense systems.

One of the important missions of Phantom Ray is to conduct electronic attacks, the ability to disable the communication of the enemy.

Characteristically - says a lot, participation in the tender of the company General Atomics.

The company is a leading manufacturer of not only the devices themselves, as avionics - unmanned aircraft systems.

General Atomics in this part is ahead of other American companies, which in some cases acquire new technologies from it, based on lasers, optical-electronic sensors, and ultra-wideband data transmission channels.

By the way, already then - 40 years ago, the F-14 Tomcat were able to reach speeds up to 2.5 thousands of kilometers per hour, and their combat radius was about 1000 kilometers ...

The demand for payload means that the future unmanned batcher will be used as a missile carrier.

Another proposed specialization is its use as a tanker for in-flight refueling of F-35C Lightning II fighter jets.

In this case, he, according to the terms of the tender, should be able to take on board up to 9 tons of fuel.

The duration of the UAV flight must be at least 14 hours.

In addition, new vehicles in part of the control and communication channels will be mated with manned F-35C or F / A-18E / F Super Hornet fighter jets to launch missiles at their command.

Prospective carrier-based drones will be guided not only from the aircraft carrier from whose deck they have launched, but also the aircraft of the already mentioned F-35C fighters, as well as the E-2D Hawkeye long-range radar detection aircraft.

Nothing is known yet about whether they will be mated with the last level of the system - satellites.

The US Navy plans extend to the 2030 year, when it is expected to gain experience with the use of carrier-based UAVs, on the basis of which additional requirements will be developed for vehicles of this class.

And this is strange - I am sure that in 16 years the center of gravity of this kind of operations will be raised from the level of the sea surface to space orbits.

X-47B is able to take on weapons with a total weight of up to 2 tons.

The above stated - American companies Northrop Grumman, General Atomics, Boeing and Lockheed Martin announced their intention to take part in the development of promising deck drone.

There is one option that is accepted in the USA: all applicants can receive an order, and the final choice will be made after the creation of a real flying model.

It is more expensive, but smarter, and most importantly - more practical. And it is very likely that in a few years several types of heavy unmanned vehicles will be based on aircraft carriers ...

New devices are planned to be adopted in 2019-2021 year, but the final requirements for them will be made public before the end of 2014 year.

And now the question of concern to the Israelis: can Israeli companies participate in the competition, which, according to the international judge SIPRI, the Stockholm Institute for Peace Studies, owns about 60% of the world market for drones export?

Hardly: Israel’s military doctrine does not have the practice of using aircraft carriers, Israel does not have them, also because they are incredibly expensive, and technically their creation is only possible for the 3-4 powers of the world.

It is unlikely that Israel has the necessary tooling for their creation “in hardware”.

And because Israel does not produce heavy unmanned vehicles of the above capacity.

But what Israel could compete with American companies in is the creation of “smart avionics”.

And although it is difficult for Israeli companies to deal with such companies as Northrop Grumman and General Atomics - the leaders of world avionics.

I am sure - after the tender, if the models of UAVs of Boeing or Lockheed Martin companies are chosen, they are very likely to turn to Israeli manufacturers.

As it happened with the F-35C Lightning II fighter.

Another possible branch of cooperation is the development and production of wings for a drone (jointly with the British BAE systems) in case the Lockheed Martin wins the tender.

On the world market weapons a curious situation is taking shape: the leaders are rushing in the direction of technology, those who are lagging behind - stubbornly climb into iron, creating backward missiles daily, ephemeral aircraft carriers, declaring new aircraft ... from the last century.

New weapons completely change the tactics of wars, and third-world countries do not have time not only to create an antidote, but even to respond to innovations.

However, leadership in the field of weapons is more of an element of business.

Who creates a stronger weapon?

This can be learned from the arms export rating, which is expected to be released soon.

It is he who will assess and put in place the annual wave of real and false information about armaments.

And I think - you will be very surprised.

Ctrl Enter
Noticed oshЫbku Highlight text and press. Ctrl + Enter
We are
About revolution in military scienceMilitary reform as an integral part of the security concept of the Russian Federation: Systematic dynamic assessment
Military Reviewin Yandex News
Military Reviewin Google News
21 comment
Information
Dear reader, to leave comments on the publication, you must sign in.