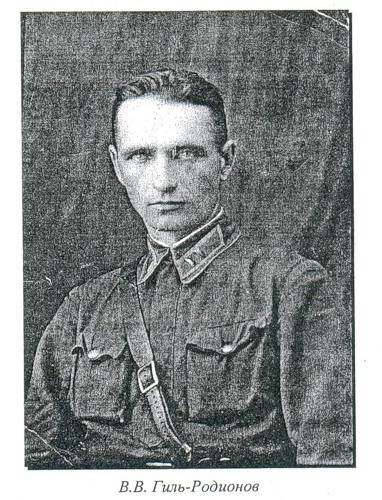 Vladimir Gil, the commander of the First Nationalist Brigade, is a traitor or a patriot? There are still many unexplained questions in his fate.


In 1929, the Geneva Convention on the Maintenance of Prisoners of War was adopted, which the Soviet Union did not sign. Subsequently, this was reflected in the treatment of Russian soldiers in captivity. In the first months of World War II, the Germans captured more than three million Russian prisoners of war. Germany did not count on so many people, and it was necessary to urgently organize concentration camps. The Suwalki camp in occupied Poland was a huge field surrounded by barbed wire, where thousands of prisoners crowded without a roof over their heads. Immediate reprisals awaited the Jews and the Soviet commissars. At the same time, the Abwehr tried to recruit Soviet citizens into the ranks of the German armed forces. In Suwalki, this was done by Standarführer Hoffmann, one of the leaders of the German intelligence and sabotage organization Zeppelin, created to work in the Soviet rear. He immediately drew attention to Vladimir Gil, captured in July 1941, under Tolochin in the Vitebsk region. German intelligence quickly found out about its origin.

Born Vladimir Gil 11 on June 1906, in the estate of Daraganovo, Bobruisk district, Mogilev province. His father, Waldemar Anthony von Luthenhausen-Wolf, belonged to the German barons, and his mother, Maria Kazimirovna Dombrovskaya, was the grandniece of the Polish king Stanislav August Poniatowski. The Lüthenhausen-Wolf family came to Russia in the time of Peter the Great, who invited the German baron to teach mathematics. And Catherine II, for her faithful service, presented the Daraganovo estate to Lutenhausen-Wolf. In the 1914 year, in connection with the war in Russia, the persecution of the Germans began, and the father was forced to change his name and became known as Gil. Son Vladimir graduated from 9 classes and in October 1926, he joined the Red Army. In 1939, he graduated with honors from the Military Academy. Frunze and was promoted to lieutenant colonel. Then he entered the Academy of the General Staff and in 1940, he was sent to the city of Armavir of the Krasnodar Territory as the chief of staff of the 229 Infantry Division.

Vladimir Gil was captured at the very beginning of the war, his family remained in the homeland - his wife and two children, son Vadim and daughter Galina. A descendant of a noble family, Gil was fluent in German, French and Polish. He agreed to work for the Germans, and already in December 1941, Gil was appointed to the post of commandant at the Suwalki camp.

Vladimir Gil was ordered to select Russian prisoners of war to create a nationalist detachment. In March, 1942, this group was sent first to a special camp near Breslau, and later - on a trip to Germany with a visit to Berlin. At a concert dedicated to Hitler's birthday, Walter Schellenberg personally recommended Gil to the Führer, saying that he could be useful to Germany. After this, Hitler entrusted Gilu with a special task of organizing the “Combat Union of Russian Nationalists” out of Russian prisoners of war to fight Bolshevism.

The leadership of the union was also entrusted to Gil, he also wrote an ideological program, which referred to the dissolution of collective farms and the return of land to the peasants. Thus, Gil expected to attract prisoners of war, dissatisfied with the policies of Stalin. Then he changed his last name and took the pseudonym Rodionov - after his father-in-law. 25 of former Soviet commanders immediately signed up for the Battle Union. When joining the union, new members swore unquestioningly to fulfill all the instructions of the union leader. Initially, the “Battle Union” was conceived as a political organization, but was later renamed the fighting “Friendship in the fight against the Red Army.”

By May 1942, the first squad of hundreds was formed. In the Soviet army, they were ranked from junior lieutenant to lieutenant colonel, here they became privates. They were given a new Czech uniform with SS decals, but the shoulder straps were of their own design, and on the sleeve - a swastika and a black ribbon with the inscription “For Russia”. By June, the number reached five hundred people, and the detachment became known as the “First Russian National SS Detachment” or “Squad No. 1”. The first company consisted entirely of former officers of the Red Army, while the other two were staffed by German officers and Russian nationalists from among the emigrants.

After three weeks of preparatory training, the battalion was assigned the first combat mission - the hunt for Polish partisans in Tomaszewski, Zamost and Rava-Russky counties. In the autumn of 1942, the national brigade was transferred to the Bykhov area, where they first guarded the railway, and then participated in operations against partisans in the Begomlya area. The execution of the orders was monitored by a special SS service at the retinue. From the very beginning, Gil-Rodionov established a rule: not to allow self-will in relation to the civilian population. The fighters in the massacres with the population did not participate and tried not to engage in clashes with the partisans.

In April 1943, a “delegation” from General Vlasov arrived at Gil-Rodionov and agitated his fighters to join the Russian Liberation Army (ROA), but no one agreed. In the summer, the detachment was transferred to Dokshitsy, where the partisan brigade "Zheleznyak" operated. Her command immediately drew attention to the Russian national squad and launched reinforced agitation among its fighters. Between Gil-Rodionov and the commander of Zheleznyak, Titkov, correspondence ensued, in which the partisans urged to go over to their side. In early August, a meeting of brigade commanders was held, where they discussed the details of the transition.

16 August 1943, Gil-Rodionov read an order to his battalion: “From this number, I order the brigade to call the“ 1-I Anti-Fascist Partisan Brigade ”. I charge every fighter mercilessly to exterminate the Fritzes until their last expulsion from the Russian land. ” 16 and 17 August all the German officers were destroyed in the brigade. Around 40, ardent anti-Soviet people led by intelligence chief General Bogdanov were arrested and handed over to partisans. A few days later they were transferred to Moscow to the main counterintelligence department of Smersh, where everyone was interrogated with addiction. Gil-Rodionov himself was also interrogated for three days.

In order to atone for the homeland, the Gil-Rodionov brigade attacked the strongly fortified German garrisons in Dokshitsy and Krulevshchina. Partisan detachments for two years unsuccessfully tried to seize these stations. On August 17, the German garrison in Dokshitsy was taken by surprise by the soldiers of the 1st Anti-Fascist Partisan Brigade and completely destroyed. The Krulevshchina station was more fortified, and a lightning attack did not work. A heavy battle ensued, during which a large number of Russian soldiers died. On the morning of August 18, the Germans launched a counterattack with the support of tanks и aviationbut even the bombing of the Luftwaffe did not save them from defeat. At the cost of huge losses, Gil-Rodionov captured Krulevshchina along with the trains that carried weapon, and other trophies. On the same day, he sent a telegram to Moscow about the transition of the former Russian SS brigade numbering about 2 thousand people to the side of the partisans. Stalin ordered that this event be widely publicized so that all prisoners of war knew that a return to their homeland was possible.

20 August 1943 on the Begoml airfield arrived with a plane from Moscow to clarify the circumstances of the transfer of the whole brigade to the Red Army. On September 17, Vladimir Gil-Rodionov was awarded the Order of the Red Star "for organizing the return of Soviet prisoners of war to the ranks of the defenders of the Motherland and for displaying valor and courage in the fight against the German invaders", and received the military rank of colonel. The following months, he and the brigade participated in the bravest military operations.

In the spring of 1944, in the area between Polotsk and Lepel, the Germans launched the largest offensive against partisans in the entire war. The operation "Spring Holiday" was attended by 60 of thousands of German soldiers, armored vehicles and aircraft. The forces were too unequal and the partisans quickly found themselves surrounded. 5 May Kombrig Gil-Rodionov led the fighters to break through. He managed to break through the German environment, while losing more than half of his brigade. Gil-Rodionov himself was mortally wounded and died on 14 on May 1944 on a farm near the battlefield. 1-I Anti-Fascist Brigade virtually ceased to exist. Of the survivors, the 400 people later formed the 4 squad, which continued to fight.

In September, 1991, the remains of Vladimir Gil and his fighters were reburied at the brotherly memorial cemetery in Ushachi. His wife and children were allowed to return from evacuation to Belarus and were given a cash allowance for Gil-Rodionov during the years of the war with 1941 under 1944, which was a large amount for that time. After the war история Colonel Gil is overgrown with rumors and speculation, and his personality is still a mystery.

Ctrl Enter
Noticed oshЫbku Highlight text and press. Ctrl + Enter
We are
Minsk ghetto - death conveyor for Jews"Black October" of 1941 of the year: rout of the Bryansk Front and Vyazemsky "boiler"
Military Reviewin Yandex News
Military Reviewin Google News
65 comments
Information
Dear reader, to leave comments on the publication, you must sign in.