Fight for the Arctic

December 30 2013
45
The decisive advantages in this battle will be received by the party that can in a short time ensure a powerful military presence in the region.


Russian President Vladimir Putin called for special attention to be paid to the deployment of military units and infrastructure in the Arctic. “Russia is increasingly mastering this promising region and should have all the levers here to protect its security and national interests,” the president said at an expanded meeting of the Defense Ministry board. He pointed out the need to complete the formation of new formations and military units in 2014, which are part of the prospective combat strength of the Armed Forces. Russian Defense Minister Sergei Shoigu instructed the General Staff to develop a project for the deployment of military units in the Arctic.

In many ways, this decision of the Russian president is connected with the fact that the struggle for control over the Arctic region is rapidly intensifying. It includes not only the countries of the Arctic Ocean basin - the USA, Canada, Norway, Denmark, but also the powers of other regions, for example, the PRC. Polar research has shifted from the sphere of science to the economic sphere, which has led to a fierce political dispute between the states bordering the Arctic.

Fight for resources and communications

A natural question arises: why did the leaders of many countries declare the priority of developing territories that had not been given such close attention before? A partial response to this is provided by a study of the US Geological Survey conducted in the 2000 year. His conclusions say that up to a quarter of the world's potential oil and gas resources may be located in the Arctic region. 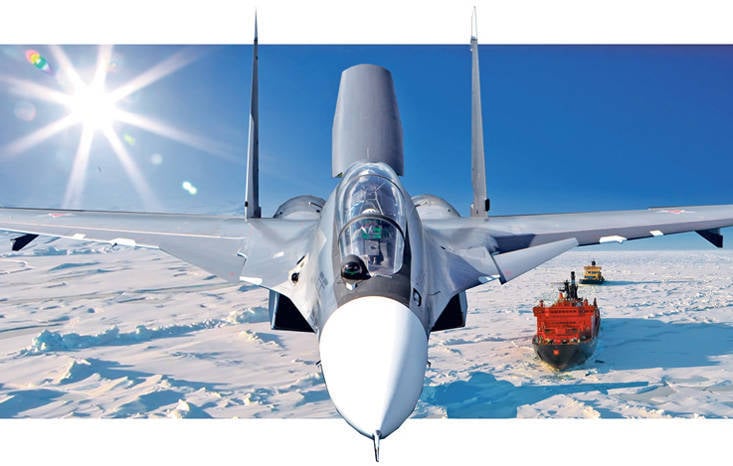 To date, more than 20 large oil and gas fields have been identified in the Arctic. For 10, the promise of development has already been proven. According to the estimates of the Ministry of Natural Resources of the Russian Federation, 6,2 reserves of a billion tons of oil and 15,5 trillion cubic meters of gas are concentrated on the 84,5 area of ​​one million square kilometers. The most famous is undoubtedly the Shtokman field located in the Russian shelf zone of the Barents Sea.

The price of territorial disputes in the Arctic is huge. If Moscow succeeds in proving that the Lomonosov Ocean Ridge and Mendeleev Rising, which are reaching for Greenland, are a direct continuation of the Siberian continental platform, then Russia will be entitled to additional 1,2 million square kilometers in the Arctic and the development of colossal oil and gas fields in the Chukotka - Murmansk triangle - North Pole.

Leading world countries are trying to develop new oil and gas fields, using a variety of ways to claim their rights to areas rich in hydrocarbons.

Another, in the long term, equally important resource of the Arctic is transport communications.

The US National Center for Tracking Snow and Ice Cover reported that in September 2012, the Arctic Ocean ice cover had shrunk to a record high of 3,52 million square kilometers. In 2013, the summer minimum fits into the long-term downward trend in ice cover by 12 percent per decade.

In the current century, the Arctic Ocean is expected to completely free itself from ice. Forecasts for the timing of this event differ. Proponents of conservative ratings speak of 2040. There are also more radical predictions about the melting of the ice cap by the year 2020.

In any case, the route of the Northern Sea Route (NSR) is becoming more and more accessible for commercial shipping. In 2009, two German large-capacity vessels passed through the NSR, setting a new speed record on the South Korean Ulsan-Rotterdam line. Four vessels passed on the route in 2010, 2012 in 46, and 2013 in 60. The volume of traffic on the NSR is growing by tens of percent per year: in 2011-m - 0,83 million tons, in 2012-m - 1,26 million tons, in 2013-m - 1,5 million tons (estimate). Lloyd's register of 2021 is forecast on 15 million tons, to which should be added the order of 25 million tons of Russian hydrocarbons, which in ever-increasing volumes will be exported to the northern seas. Russian forecast for 2030 - 50 million tons per year.

The reason for interest in the SMP is simple and straightforward. The route from China to Western Europe along the "north" has a length of about thousands of nautical miles around 8,1. The path through the Suez Canal is longer on the 2,4 thousands of miles. If you want to go around Africa, add more 4000 miles. For the growing freight traffic from Europe to East Asia, using the NSR offers substantial profits - about one million dollars per one trip of a large container ship.

The UN Convention on the Law of the Sea 1982 of the Year allows Russia to regulate to a certain extent the navigation on the NSR. This is our advantage, which cannot be lost and must be supported in all possible ways.

Note that for Russia, the NSR also has defense significance, since it provides completely open access to the oceans and an inter-theater maneuver with the forces and means of the Russian Navy.

So, the Arctic is becoming the scene of global competition for traffic and natural resources of global importance. World история does not know cases when such competition was conducted without taking into account military factors.

At the same time, the political regime or the peculiarities of the internal structure of the competing states do not matter. It may be recalled how much manpower and resources the leading world powers spent to establish control over the Suez and Panama canals. Quite democratic, Great Britain and Spain do not hesitate to use the threat of force in the centuries-old conflict around Gibraltar. The aforementioned “civilized” Great Britain, without a shadow of a doubt, sinks the Argentine cruiser “General Belgrano” with hundreds of sailors outside the declared military zone around the Falkland Islands (Malvinas). Before our eyes, the competition of power potentials of China, Japan, and South Korea is unfolding around several cliffs in the South China Sea. The list of examples goes on and on.

The situation in the Arctic is complicated by the fact that international legislation in relation to this region has significant gaps. It’s not a fact that it will lead to the “game of free forces”, which usually ended with wars, including world wars. But there is no doubt that Russia needs a serious deterrent potential in the region that will reliably rule out attempts by rivals to solve their tasks by force.

To the history of arctic groups

At the height of the Cold War, in the late 40s and early 50s, the strategic aviation US command successfully mastered flight routes through the North Pole. On these routes, strategic bombers were brought to the most important administrative and political centers and industrial areas of the USSR by the shortest routes. Since the 60s, the ICBM and SLBM flight paths have been passing over the Arctic.

In response, units of the radio engineering troops, part of the anti-aircraft missile forces, and regiments of anti-aircraft defense were deployed in the Arctic. In particular, the interceptors were based on the airfields of Rogachevo (Novaya Zemlya Island), Amderma, Alykel (Norilsk), Coal Mines (Chukotka). The companies and battalions of the air defense radio-technical forces were deployed on the islands of the Arctic Ocean in order to create a radar field at the distant approaches to the protected objects (locations of locations - Franz Josef Land, Novaya Zemlya Island, Severnaya Zemlya Island, Novosibirsk Islands, Wrangel Island).

Operational airfields of long-range aviation (Naryan-Mar, Amderma, Nadym, Alykel, Tiksi, Cape Schmidt, Coal Mines) were located on the Soviet coast of the Arctic Ocean, where it was supposed to refuel strategic bombers before flying through the pole to strike at the continental US.

Combined arms units and formations were represented by motorized rifle divisions on the Kola Peninsula and Chukotka. Strategic missile submarine cruisers were located in the Barents and Okhotsk Seas. Operational stability of the strategic nuclear forces was ensured both by forces fleet, and the regiments of fighter-interceptors of air defense, the forces of which formed the system of fighter aircraft cover.

One of the ways to solve the task of ensuring the security of the country, the Soviet military-political leadership considered equipping air defense systems with long-range interception systems. These complexes were to ensure the interception of aircraft carriers of nuclear weapons at a considerable distance from the protected objects, forming the first echelon of the country's defense against EIS. As a result of the decisions made, the creation of such complexes, combining them with reconnaissance equipment into specialized systems, has become for many years one of the priorities for the development of the aviation component of the country's air defense system.

Soviet military leaders understood the importance and necessity of a long-range interception system and, accordingly, a long-range fighter. In their own time, they showed special perseverance in its implementation and conducting large-scale exercises in the Arctic with the involvement of new aircraft at the time (MiG-31, Su-27, A-50, Il-78 type tankers) and working out the issues of their combat applications in the aeronautical long-range interception system.

The long-range intercept aviation system was intended for detecting an aerodynamic means of air attack beyond the horizon of a probable enemy and destroying strategic bombers by aviation complexes to the point of launching cruise missiles by the enemy under conditions of massive use of all types of electronic and fire suppression by the enemy.

Ctrl Enter
Noticed oshЫbku Highlight text and press. Ctrl + Enter
We are
Hybrid threats have arisen in the ArcticMilitary reform as an integral part of the security concept of the Russian Federation: Systematic dynamic assessment
Military Reviewin Yandex News
Military Reviewin Google News
45 comments
Information
Dear reader, to leave comments on the publication, you must sign in.